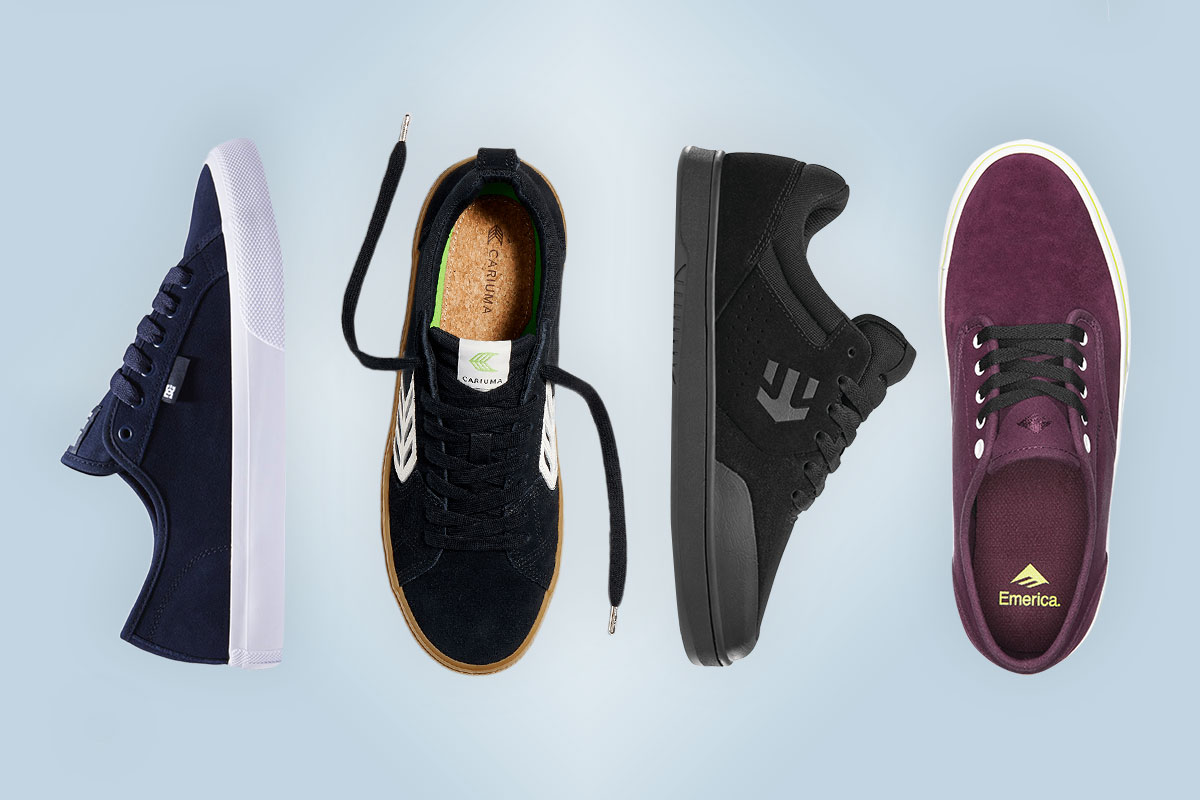 The action sport of skateboarding is one that has been around for decades, with men and women young and old jumping on their skateboards to perform insane tricks on the street and in skateparks, for both recreational and competitive exploits.

Skateboarding as a sport has increases in popularity year on year, and will make its Olympic debut at the postponed 2020 Tokyo Olympic Games. As with any sport, the equipment you use for skateboarding can be the difference between winning and losing, and with so many parts: board, trucks, wheels, grip tape, to name a few, there is a lot to consider. You also need a super pair of skate shoes to keep your feet planted on the board and to provide support around the ankles to help prevent injury.

It’s that latter point that makes skate shoes different from regular everyday sneakers, so if you’re thinking about taking up the sport, you need to make sure you invest in all the right places, unless you fancy a trip to the hospital with broken bones or torn ligaments. Fortunately, there is a whole host of skate shoe manufacturers, each offering their own distinctive styles, including collaboration models with professional boarders.

But, just because they offer extra features over everyday sneakers, doesn’t mean they can’t be worn when you’re not lipsliding your way down a stair rail. They can be worn whenever you want, and so how they look may be of more importance to you, as you’ll still want to be able to pair them with your usual array of looks.

We’ve scoured the web to bring you the definitive list of manufacturers producing some of the most technically advanced, and good-looking skate shoes on the market right now. 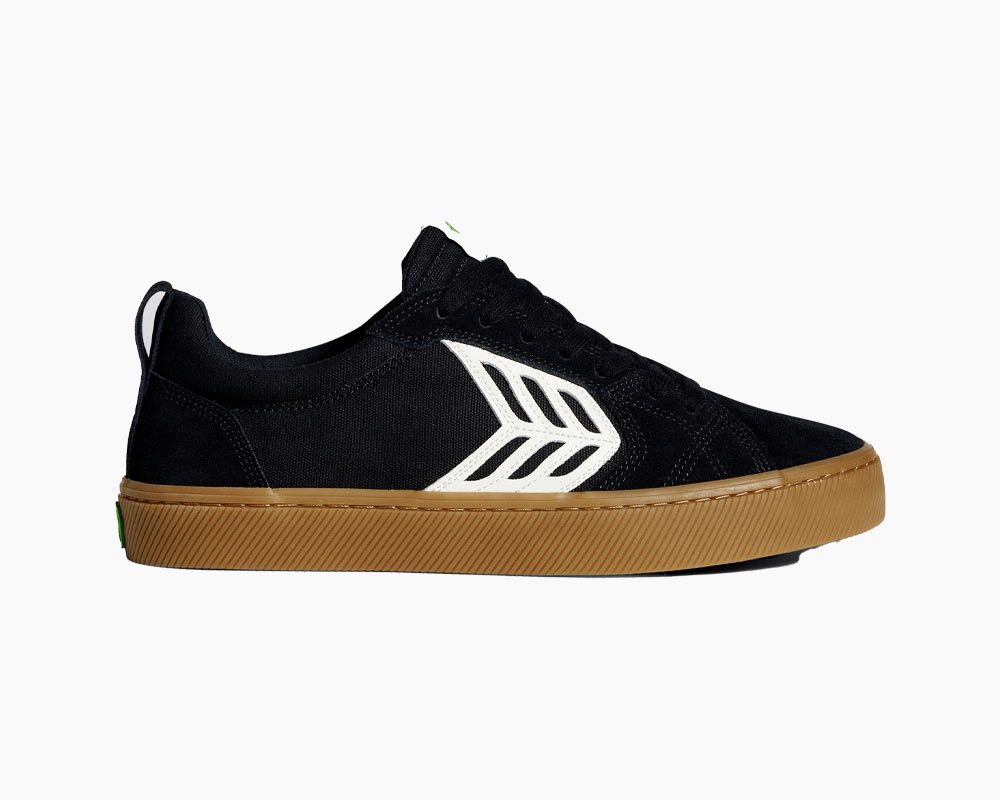 Brazilian footwear brand Cariuma does everything it can to be as sustainable as possible. From materials used for shoes and packaging to the way in which they're made, it's all done to be as beneficial to the planet as possible, while still providing a top-performing product.
Alongside their range of everyday sneakers is the Catiba Pro, a dedicated skate shoe that takes a previous silhouette, but adds extra durability, comfort and grip. Features such as extra stitching as the point where you flick the board for tricks and memory foam insoles for greater arch support, make them a solid choice for amateurs and professionals.
Shop Now 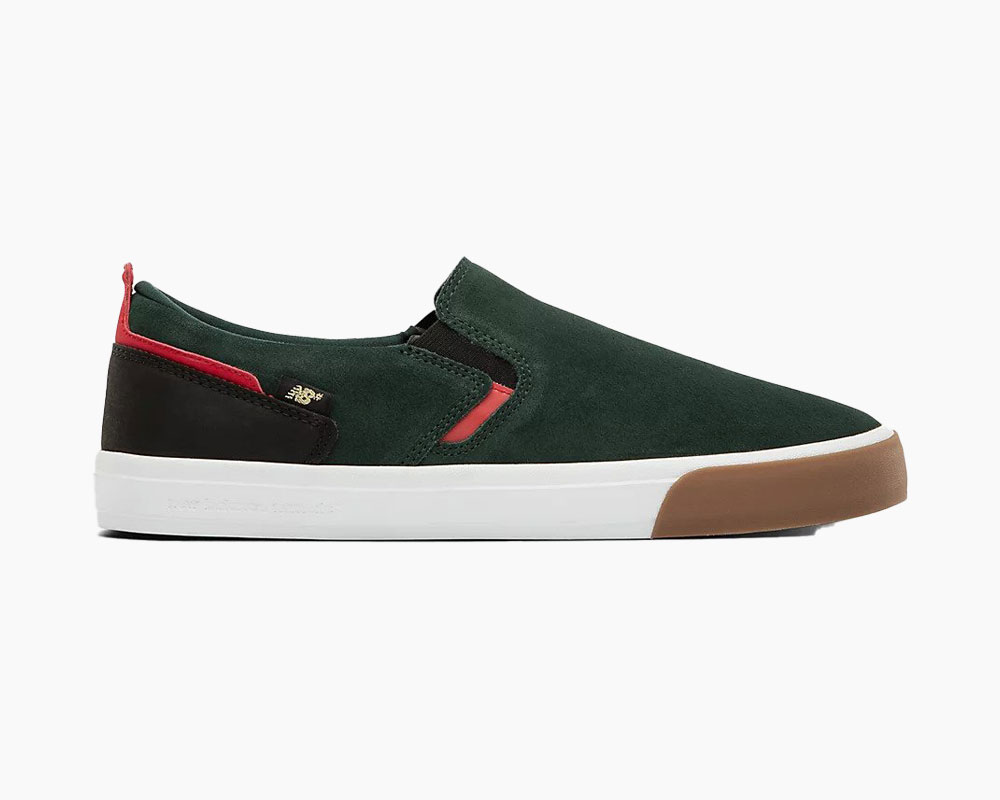 With specialist knowledge and dedication to all things footwear, it should be no surprise that New Balance is in on the skate shoe game. In fact, the brand even sponsors the New Balance Numeric skate team, which includes high-profile names such as Jamie Foy, who has his own signature model.

What we particularly love about New Balance's skate shoe range is their retro-inspired design, but you'll find they're not all style and no substance. Cushioned midsoles, supportive uppers and lightweight materials make them easy to wear day in, day out, all the while keeping their shape.
Shop Now 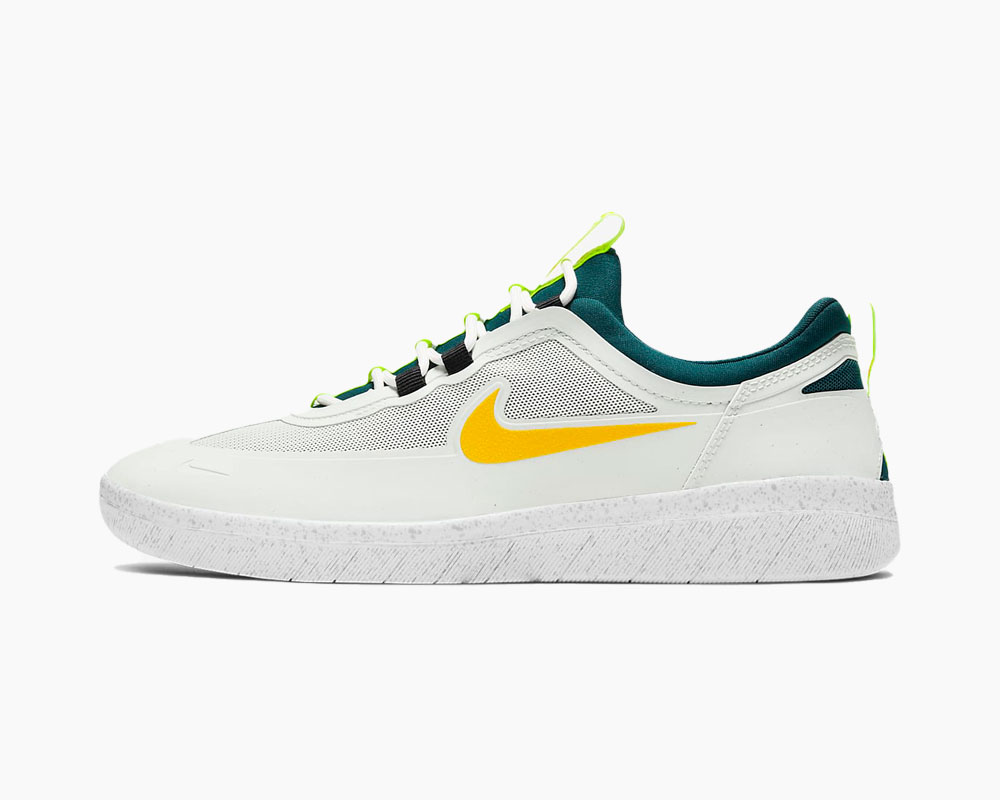 The Nike SB range of skateboard clothing and footwear is one that has, perhaps unsurprisingly, found affinity with those that have never stepped foot on a board. Such is Nike's global appeal, and the quality of its pieces, that everyone is happy to wear them.

For the serious skaters however, there is still much to love. Durability and breathability feature across the range, with reinforced sections around the heels and toes, and with pairs such as Nyjah Huston's signature model offering incredible levels of grip and even durable lacing, you can confident in your heel flip abilities.
Shop Now 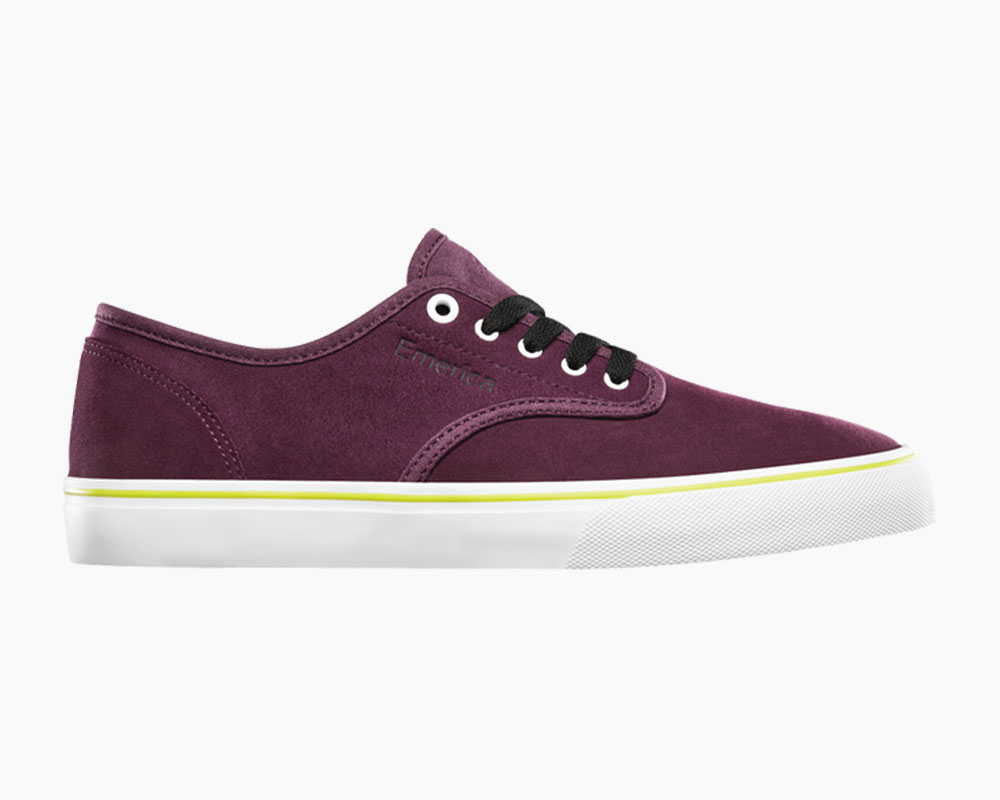 Launched in 1996, Emerica is a brand that is simply all about skateboarding. Undeterred by following fads or needing to offer the next best thing, Emerica simply produces clothing and footwear that it knows is built for the task at hand. That's why you'll find the company's shoes feature excellent cushioning and their own Heel Anchor System to help prevent you ankles from rolling when you land tricks. A range of skate shoe styles are on offer, from slip-on to low-top to high-top. If you live and breathe skateboarding, Emerica's skate shoe selection is well worth checking out.
Shop Now 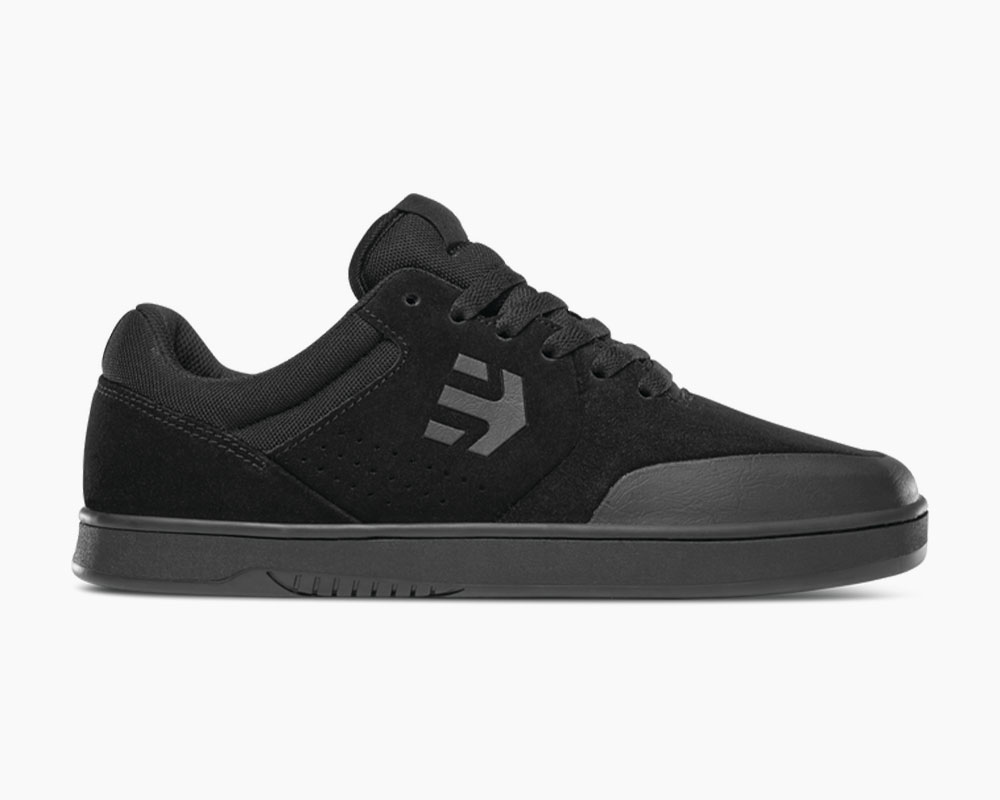 Much-loved skateboarding and extreme sports brand Etnies has been around since 1986 and is now under the ownership of the same company that owns Emerica and and éS. The brand is known for its decidedly more chunky skate shoes compared to some of its peers, but this extra size brings extra durability, with some models being referred to as the "most durable shoe in skateboarding." In fact, some models even get rubber sourced from tyre manufacturer Michelen for the ultimate in grip and performance.
Shop Now 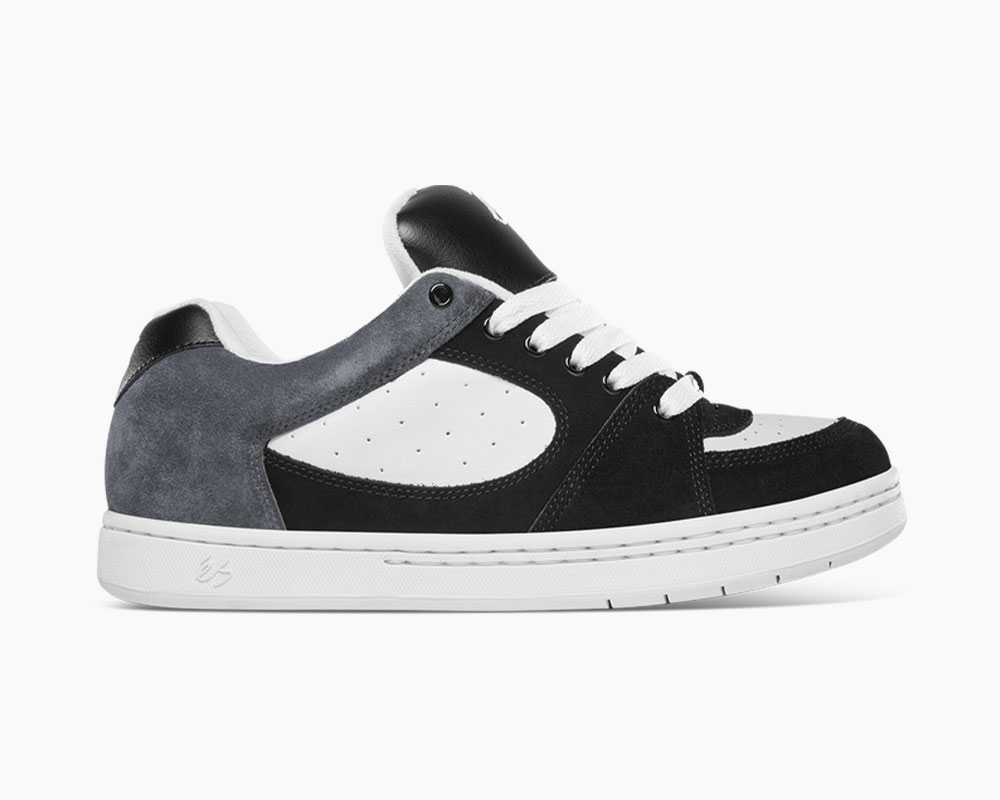 As previously mentioned, éS is a sister brand of both Emerica and Etnies, and is one that is revered within the world of skateboarding. After forming in 1995, éS, at some time or another, had some huge names on its team list, including Nyjah Huston, Eric Koston and Bob Burnquist.

Similar to Etnies, éS shoes verge on the chunkier, more padded side of things, but much to their benefit, offering ventilation, premium materials for durability and longevity, grip and comfort. And of course, with skateboarding still holding on to its 90's roots, you can keep the retro vibes going with the classic styling.
Shop Now 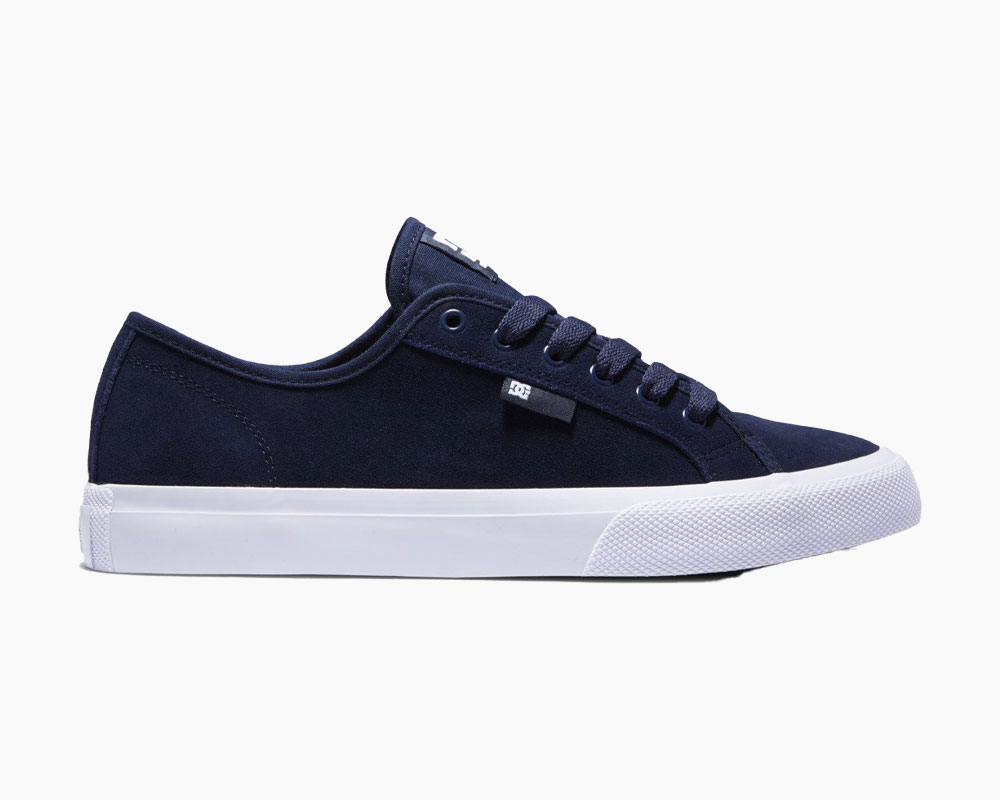 Founded in 1994 by Damon Way and professional racing hooligan Ken Block, DC Shoes is a major player in the worlds of both skateboarding and snowboarding, along with some other action sports. Nyjah Huston appears once again as a former sponsored 'boarder, while current team members include street skateboarder Josh Kalis and Madars Apse.

DC Shoes caters to lovers of both chunky skate shoes and more slimline offerings, that verge into lifestyle and everyday wear too. Many pairs benefit from the brand's own Super Suede and Super Rubber materials, both of which are designed to outlast their 'non-super' counterparts. Reinforced insoles mean you get extra protection for your feet when landing tricks, and DC even incorporates recycled materials into their shoes wherever possible.
Shop Now 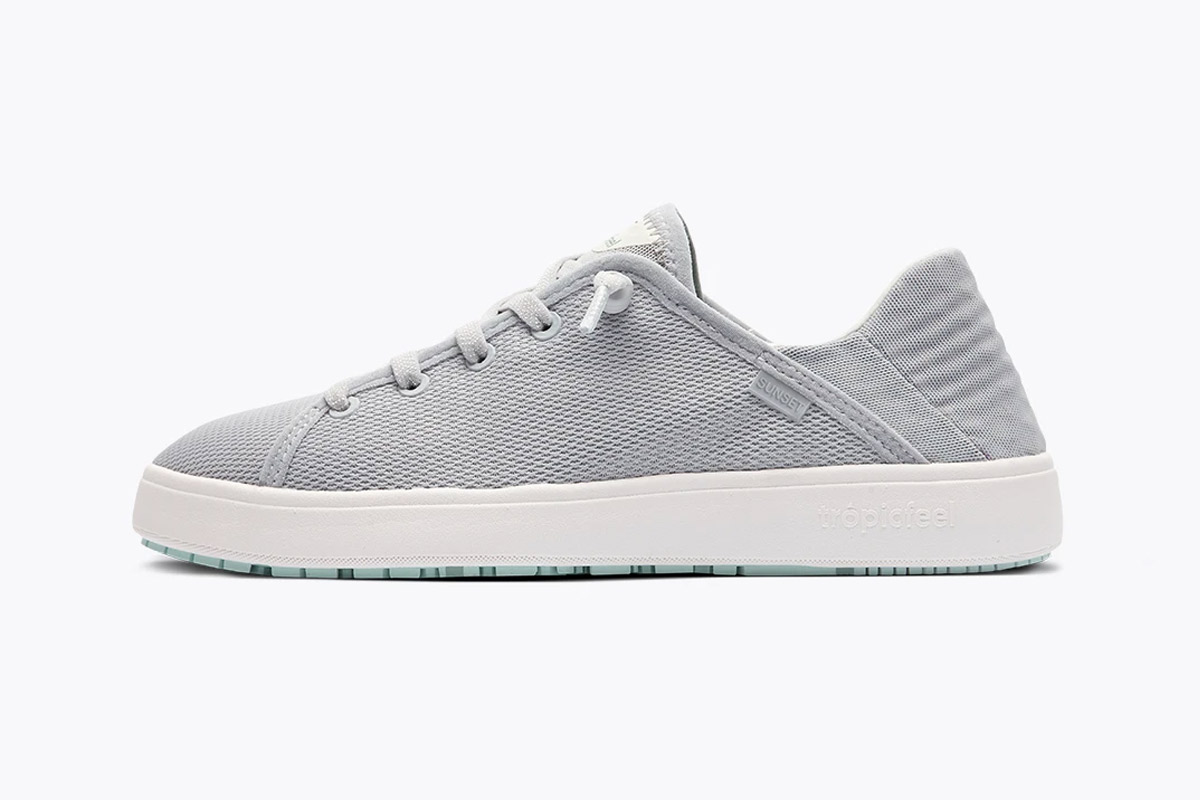 Created to fill a gap of versatility present within the men's sneaker market, Tropicfeel are dedicated to creating travel gear that is lightweight and sustainable, and above all can be worn for almost any and every situation or adventure. All of Tropicfeel's sneakers are completely water friendly, lightweight, quick drying, stylish, and ever so comfortable; making them the perfect skate shoe. Designed to be worn on all terrains, whether it's an urban city street or the top of a precarious mountain, you'll feel comfortable and in control while skating in these sneakers.
Shop Now 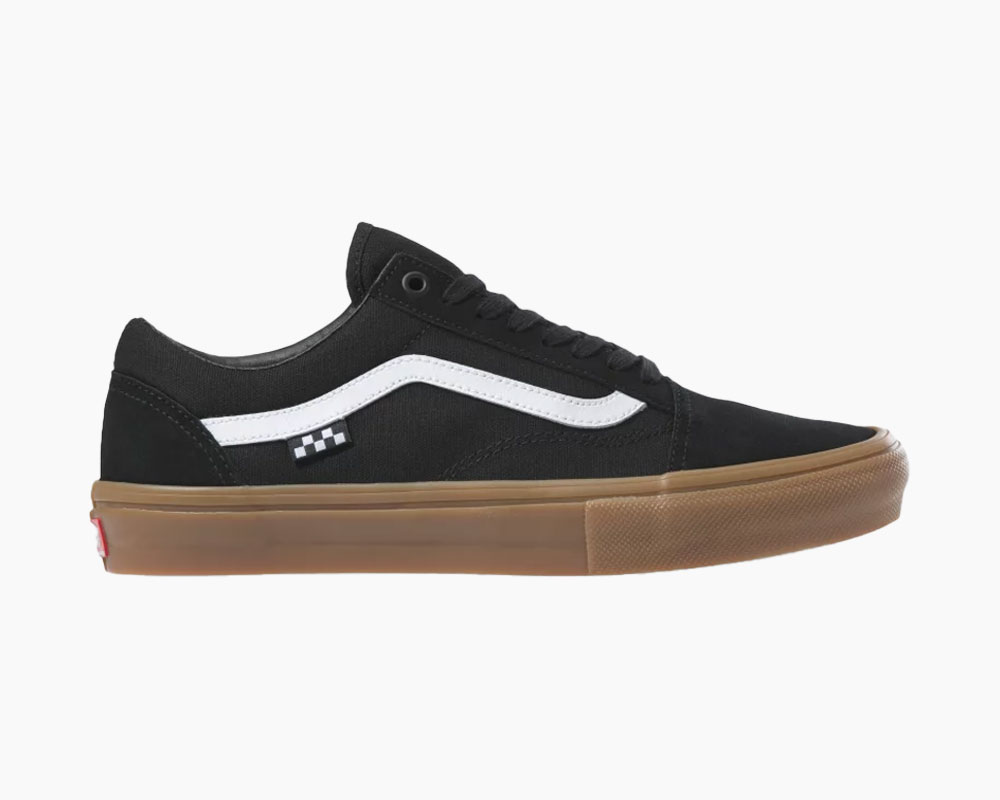 One of the most recognised brands around the world, and not just in the skateboarding industry, Vans has become a dominant player thanks to its Old Skool shoe, which you will see on virtually every other pair of feet you see during your day.

Vans has achieved its success thanks to a range of incredibly stylish skate shoes that double up as easily wearable everyday shoes. Despite their lifestyle associations, they're perfectly capable when it comes to tearing up the pavement, with reinforced areas all around the shoe for extra protection and stability, while the brand's iconic gum rubber sole keeps your feet planted on the board. Such is their comfort, though, that you can easily wear them all day everyday.
Shop Now 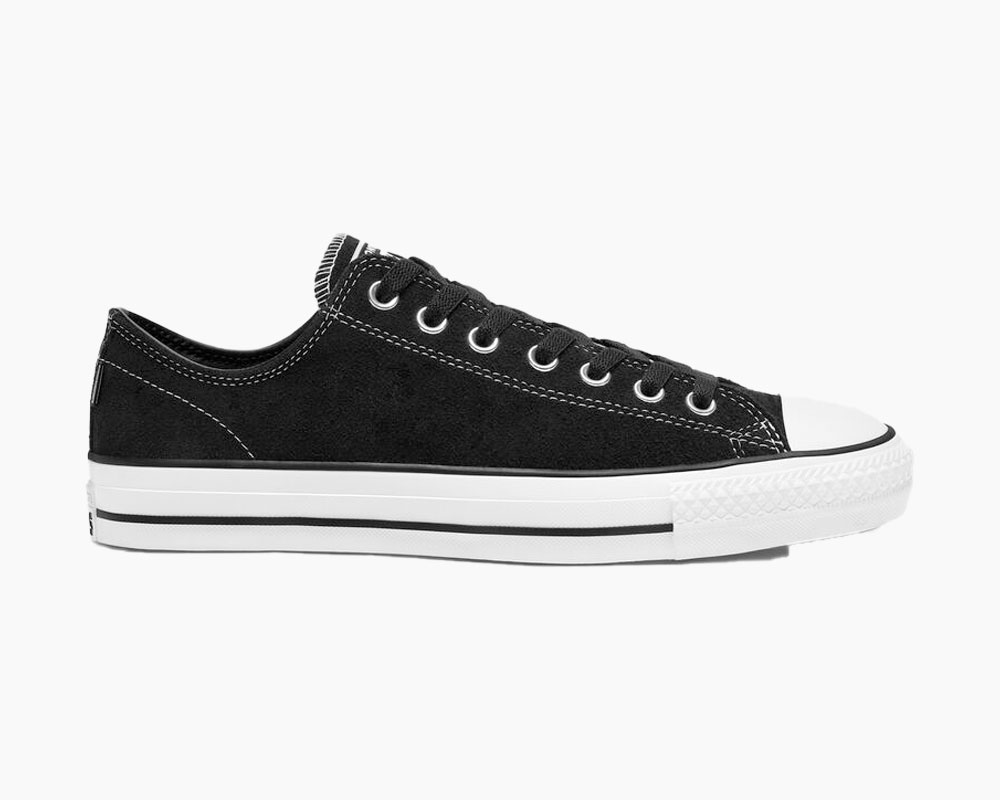 What initially started out as a brand for professional basketball players has evolved into one of the most well-known names on the planet. Founded way back in 1908, Converse still commands a significant consumer base, due to its timeless designs, quality of craftsmanship and their ability to be paired with practically anything. Converse's dedicated skateboarding line goes one step further than its lifestyle range, offering greater comfort, greater durability and greater traction. Converse even has its own team, including members such as Milton Martinez, Louie Lopez and Raney Beres.

Many of Converse's skateboarding shoes look remarkably similar to the styles we all know as love, including both low-top and high-top models, but add features such as CX foam insoles and CONS traction rubber for greater board feel. But because of their appealing aesthetic, you can easily wear them as regular walking shoes. So versatile.
Shop Now 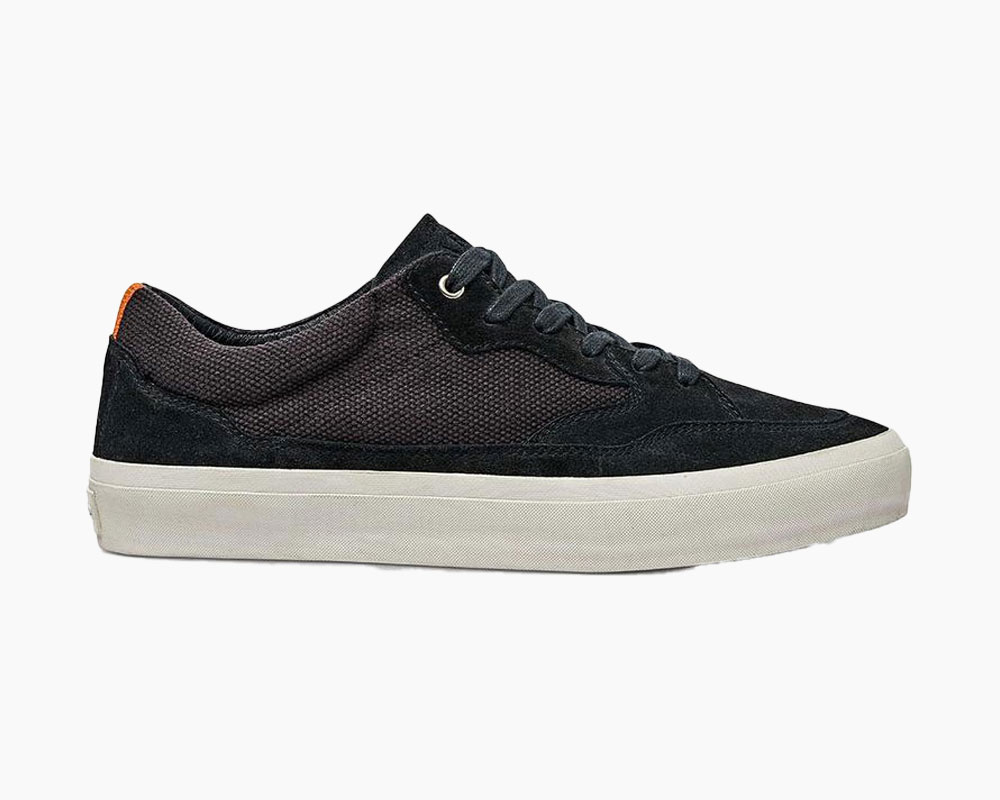 US clothing and footwear brand Arbor has been in the business for close to quarter of a century. Throughout that time, the label has remained committed to sourcing sustainable materials for everything it creates, which includes apparel and footwear for snowboarding and skateboarding disciplines, in fact, Arbor prides itself as being the first action sports brand to consider the environment "across everything we do."

Not only does Arbor have its own range of skateboard hardware, but its footwear collection is something to be admired too, presenting classic and easy-to-wear silhouettes with vulcanised sections for added strength, leather linings for breathability and Regrind rubber soles for second-to-none grip. A worthy alternative to the big-name brands.
Shop Now 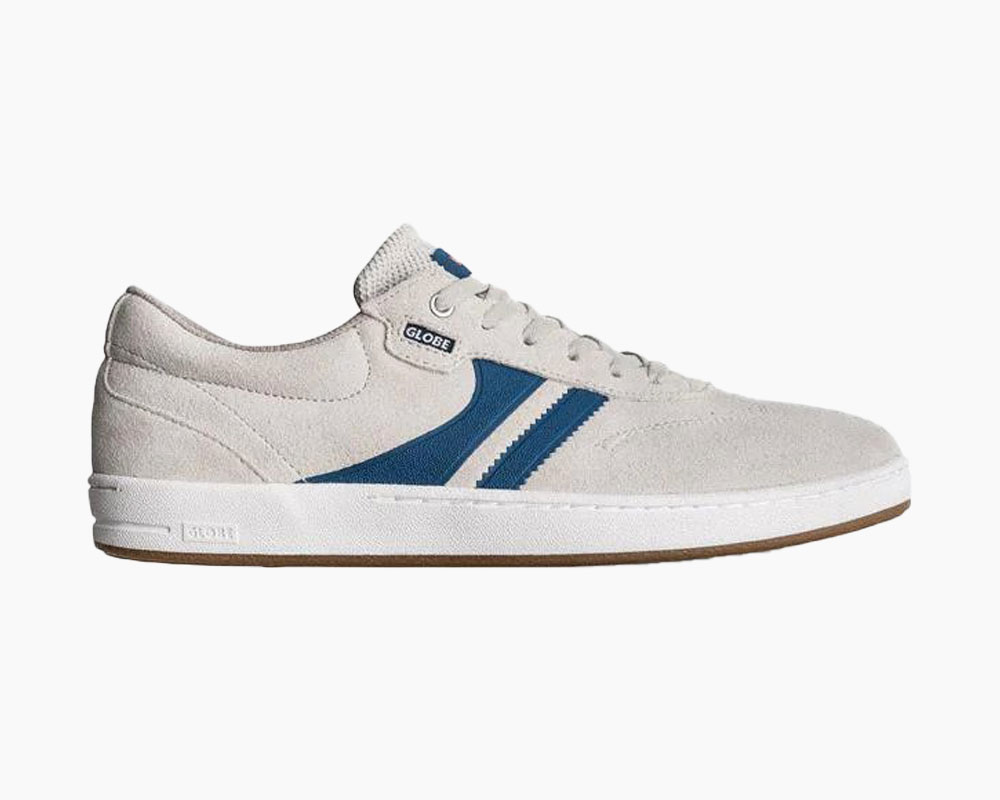 Another big player in the world of skateboarding is Globe, founded right here in Australia in 1985 by three brothers. At one time in its lifespan, Globe was one of the biggest skateboard brands in the world, following a string of acquisitions which included other prominent brands such as EnjoI, Blind and Stüssy.

It's with this in mind that Globe's skate shoes can certainly be trusted for their performance. Design-wise there is much to like, with various styles on offer for different tastes, but with many being easily integrated with everyday outfits. Materials such as suede are used heavily throughout the collections, and particular focus is put on the outsoles, which see materials such as Pro Am rubber used for excellent grip, along with the company's own Nitrolite midsole, designed for enhanced comfort. 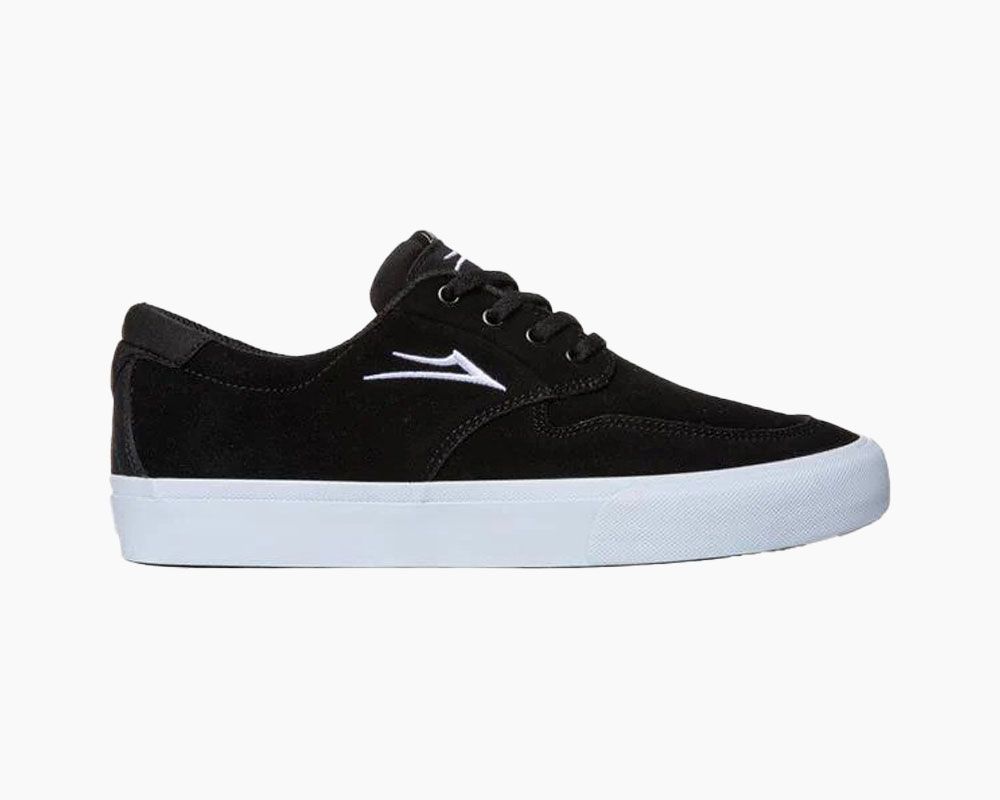 Lakai is one of those often-overlooked brands that really should demand more attention. Founded in 1999 in Los Angeles and with such names on the roster as Rick Howard, Mike Carroll and Riley Hawk, it's a brand you really ought to know.

Lakai's skate shoes are tastefully designed, serving up classic slim silhouettes that can easily be paired with jeans, chinos and casual shirts for everyday looks, while also providing the goods when it comes to performance at the skate park. Suede makes a standout feature across the vast majority of the range, while proprietary Para-Mount outsoles make an appearance, which utilises dual-density rubber for extra cushioning and to prevent your heels and ankles from rolling. Delux-Lite sickliness add the comfortable cherry atop the cake.
Shop Now 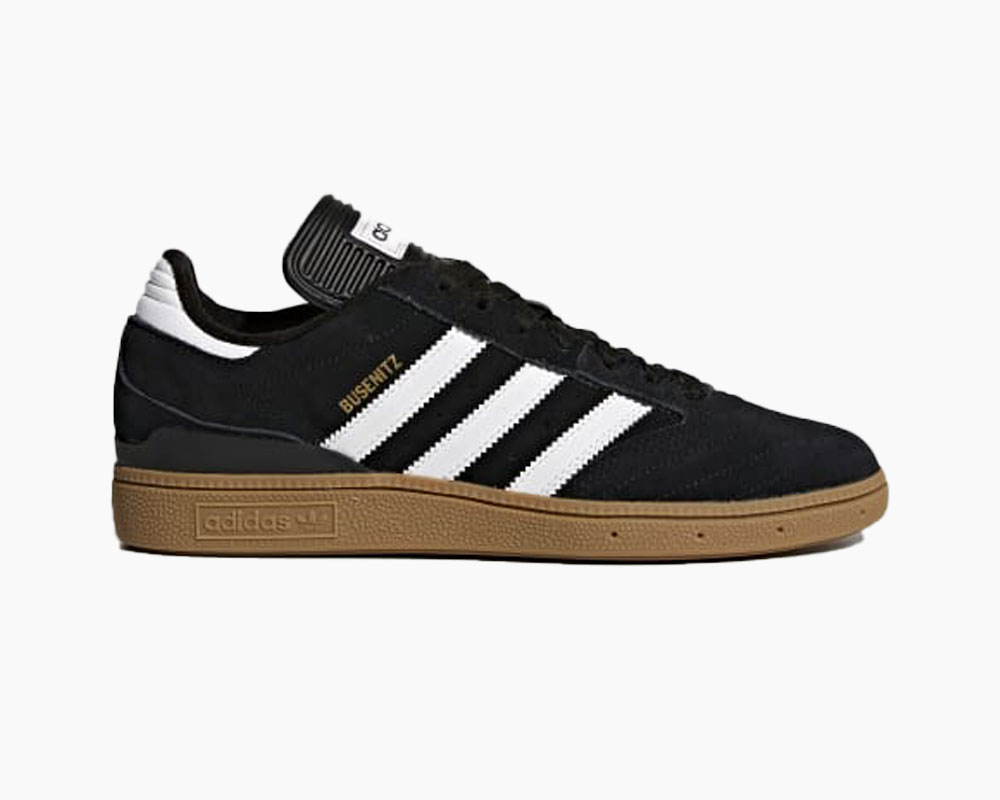 With an already well-established footing in the footwear game, German sportswear giant Adidas has, perhaps unexpectedly, wrestled its way into the skateboarding industry. And there's much to love about the move. 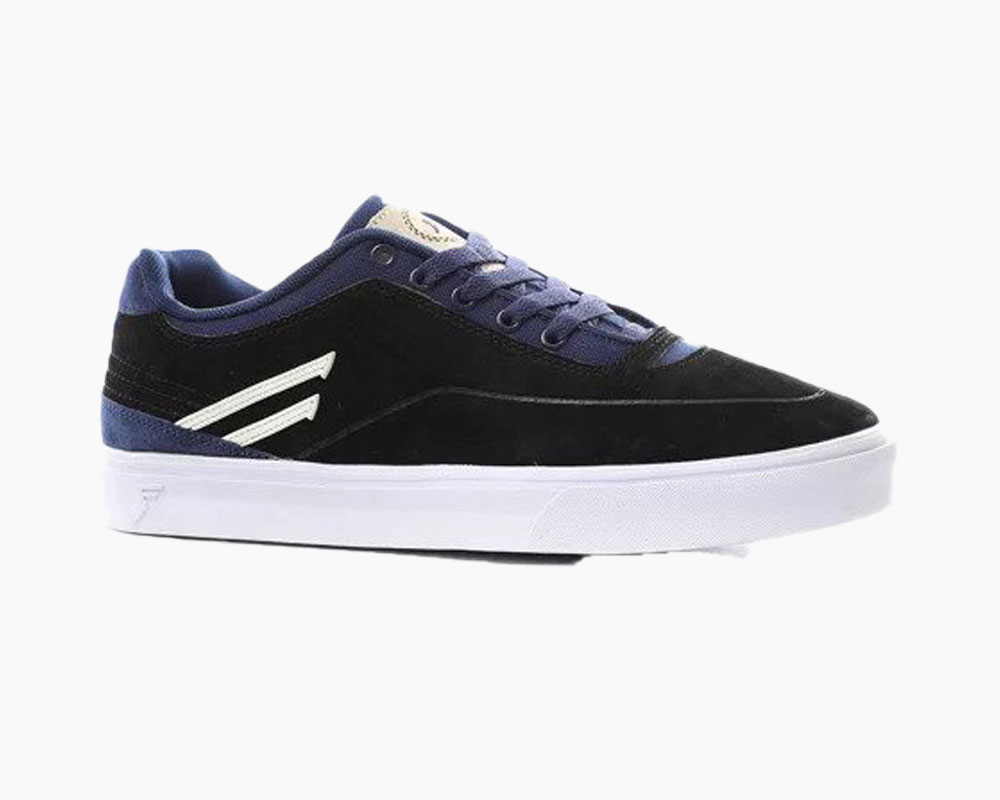 Footprint is a company that designs and produced orthotic insoles to assist those with irregular feet, such as having no arch. The company has then taken that same technology and decided to design its own range of shoes, including skate shoes, that incorporate these insoles for the ultimate is comfort and protection.

While the shoes themselves provide the usual list of grip and joint support, its the insoles that are the star of the show, providing incredible levels of impact protection that you'll struggle to find in shoes from other brands. They may not have the materialistic brand appeal of some others, but when the health of your joints is at stake, we really don't think that should matter.
Shop Now