Australians can’t enough of activewear. Both men and women strap on the running shoes and don their finest gym gear to go outside for a walk. Sydney walks may be great, due to its coastal scenery and numerous national parks, and due to it being slightly more landlocked, you may not expect Melbourne to be such a walking mecca.

But you would be wrong. The urban metropolis may not have the most exciting walking routes within the CBD, but take a short drive in any direction and you’ll be rewarded with some picturesque walking routes that take you past waterfalls and through forests. And, even though we may have knocked the CBD a little, Melbourne’s central district is still a great place to take a stroll when the weather is particularly great.

So, strap on you walking, hiking or indeed running shoes (comfort is key) and head out to explore Melbourne and the best walks it has to offer. 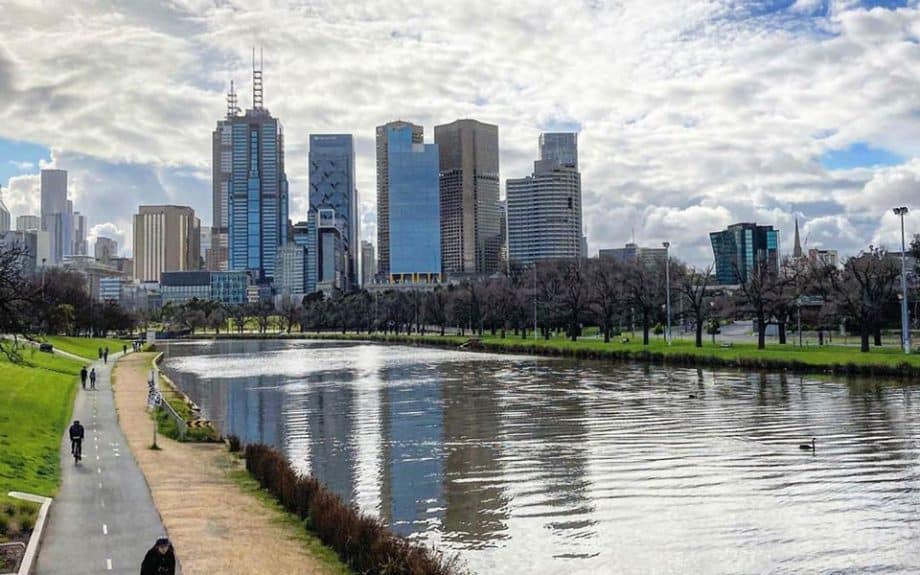 Starting with Melbourne CBD and an absolute beast of a trail that has views of the vibrant city skyline. While the full 29.6km loop may be better suited to cyclists, if you’re feeling particularly energetic then you can choose to walk it instead (or at least, tick off sections over a few weekends). Offering the ideal tour of Melbourne, this flat, dedicated trail (that is signposted for the most part) takes you past the Royal Botanic Gardens, Docklands, Melbourne Zoo, Fitzroy and Southbank, to name but a few landmarks. 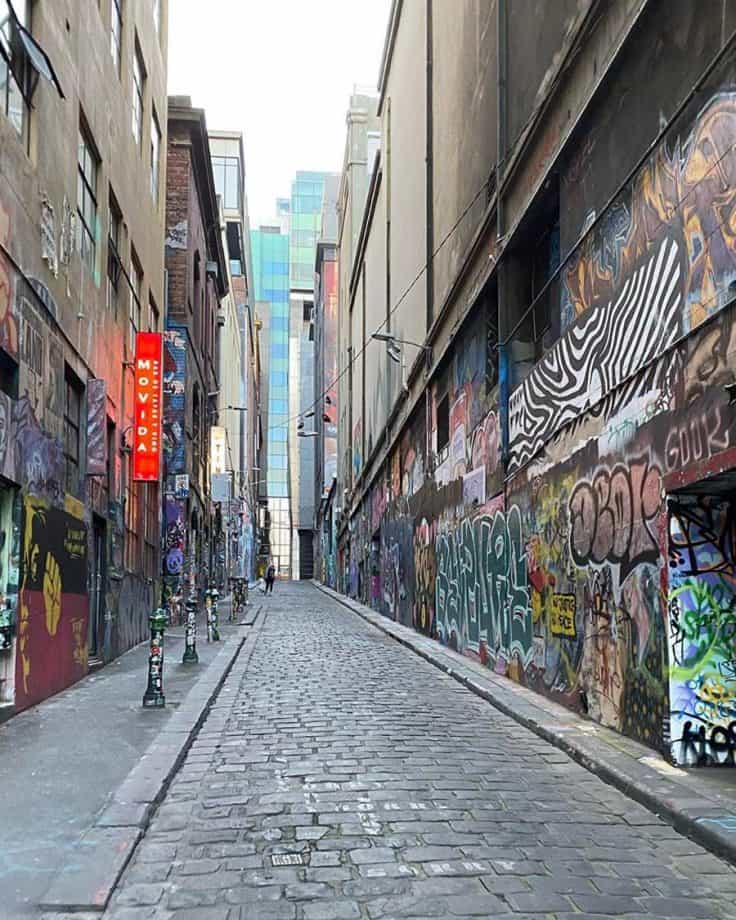 The street art walk is to Melbourne what the Bondi to Coogee walk is to Sydney. An absolute must for anyone visiting the city, the street art and graffiti tour is just over 3km in length if you tackle it in one go, and will take you to various laneways that are just begging to have their photo taken. If your Instagram feed is in need of some new posts, standing in front of some of the finest graffiti in Australia will start seeing the likes roll in. 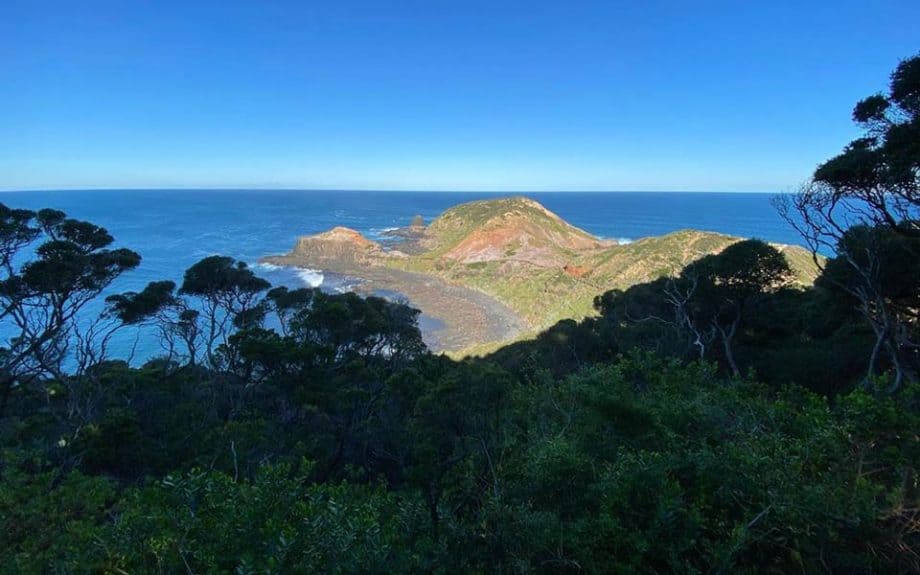 Another 26km walk now, this time a little more scenic as it’s in the Mornington Peninsula. Start it early enough in the day and you’ll be able to complete it before sundown, for those who prefer to take their time, this walk can be split up into sections. The beginning section takes you from McCrae and up to Arthurs Seat State Park, which, when you reach the top, offers sublime views over Port Phillip Bay. Feel free to stop here and turn back, or continue along the remaining 20km trek (which is fully signposted with Blue Wren symbols) towards Bushrangers Bay and the Mornington Peninsula coast. 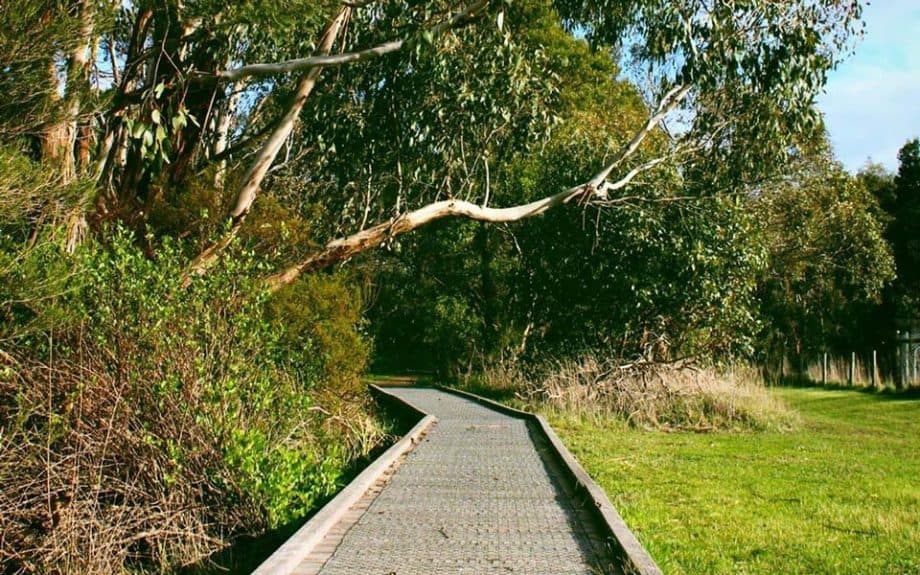 Not just one, but up to four walking tracks are just begging to be trampled on in the Coolart Woodlands. If you’re a keen ornithologist, Coolart is the perfect place to spot some 60 species of bird, all while walking through both woodland wetland areas, as well as the grounds of the former Coolart Homestead, a late Victorian mansion. All four walks start from the car park, and with the longest being 3.1km in length, all are quick and easy and suitable for all walking abilities. 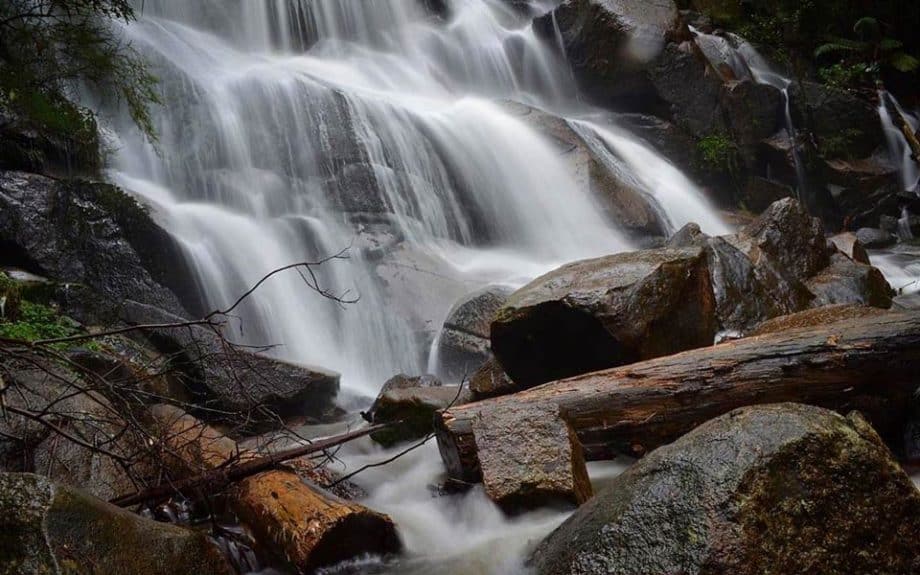 The Toorongo Falls Reserve found in Noojee, just under two hours east of Melbourne, is where you’ll find this looping walk that serves up views of both the Toorongo and Amphitheatre Falls. An easy 2.2km return track that is suitable for all abilities, seeing you traverse predominantly hardened gravel, you should be back to your starting point in around an hour. That is, of course, dependent on the amount of time you take for breaks to admire the falls, and Toorgono, in particular, is certainly worthy of being patient to take some great long exposure photos. 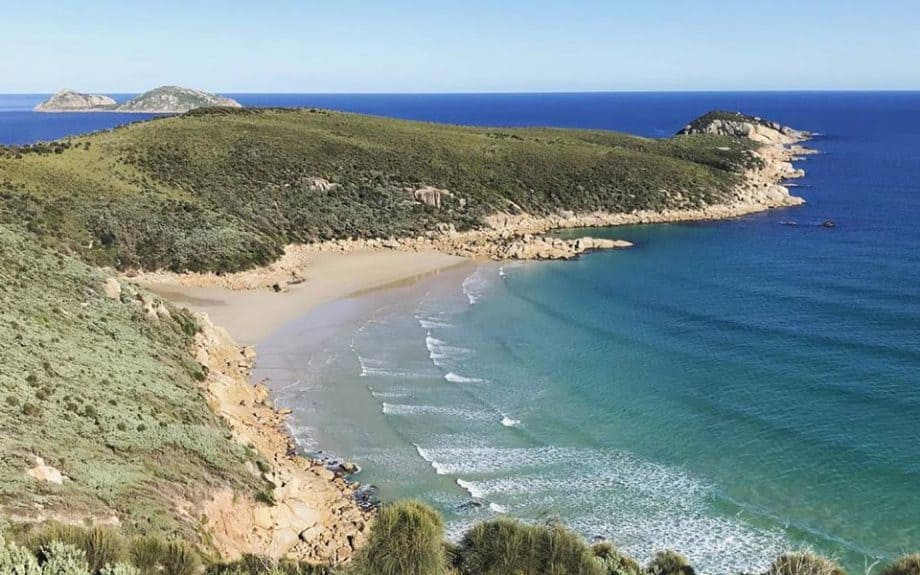 This stunning 9.6km coastal walk maybe around a three-hour drive from Melbourne CBD, but we strongly recommend you give it a go, not least because it includes a climb over an ancient sand dune, along with exemplary views across the ocean. It’s also a great walk for serving up the chance to see some wildlife, including wallabies, echidnas and wombats. There’s more chance of seeing these Australian creatures at dusk or dawn as they’ll likely be foraging for food, but you may still get a lucky sighting during the day.

It’s also worth paying a visit to Fairy Cove. A slight detour from the main path, Fairy Cove is a sheltered beach with undisturbed white sands and clear ocean water that makes for a perfect swimming spot. If you complete this walk during the winter months, you’ll want to make sure your wrap up warm to protect yourself from headland winds, but also take your camera or binoculars, as you’ll be in with a great chance of spotting migrating whales. 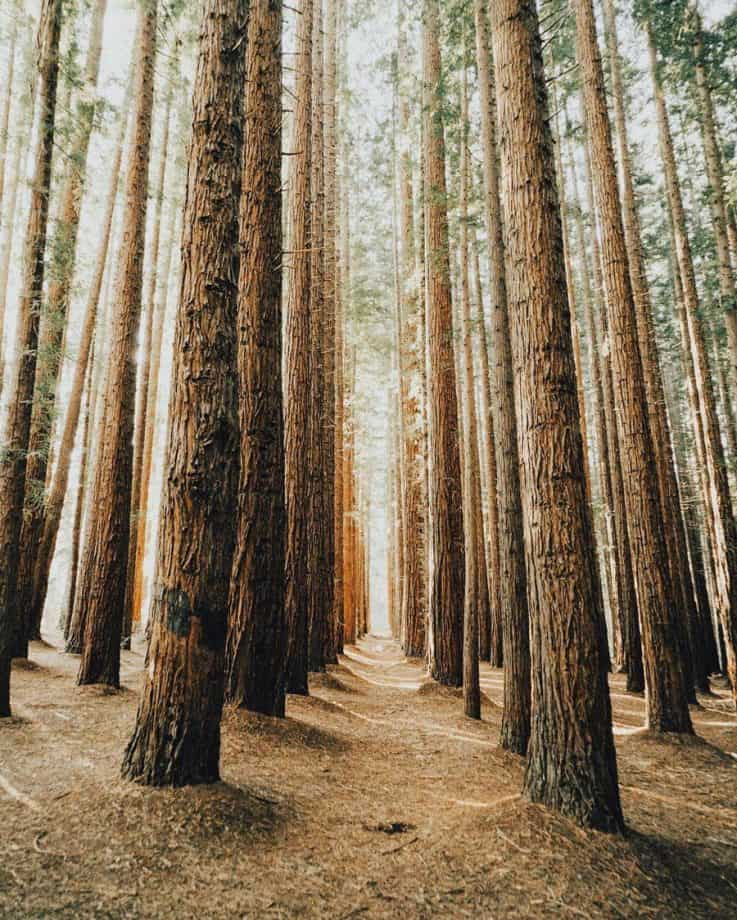 If you want to see the huge and tall Californian Redwood trees, Melbourne is the place to go. There are a few spots, including the Otways, closer to the Great Ocean Road, or the Warburton forest about an hour and a half drive east from Melbourne CBD. It’s not a walk in the sense that you follow a track or a loop, but rather, a spot where you can aimlessly wander through the forest, marvelling at the sheer height of the trees (the tallest is around 55 metres) and soaking up plenty of photo opportunities. 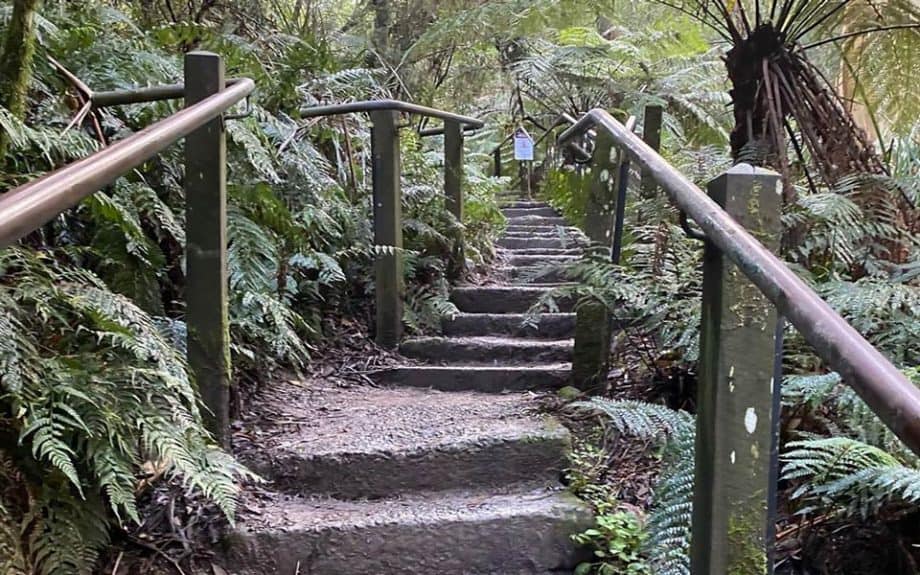 Officially the Kokoda Track Memorial Walk but more commonly known as the 1000 Steps Walk, this track in the Dandenong Ranges is incredibly popular with tourists and fitness fanatics. A memorial site for the Australian soldiers who died on the Kokoda Trail in Papa New Guinea during World War II, this walk winds its way through bushland, albeit in steep increments (so some level of fitness is required).

Making its way through the rainforest makes this an incredibly serene and scenic walk, and when you reach the top, you’re presented with a clearing that provides amazing views of Melbourne. The separate Lyrebird Track (which, if you go at the right time will present the chance of seeing the Superb Lyrebird) will take you back to the car park. 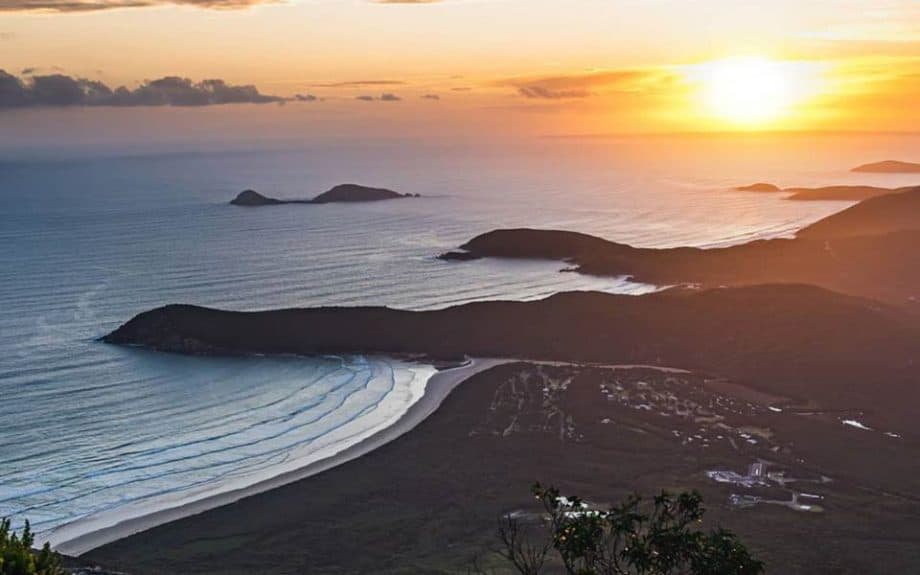 If views from up high and the chance to witness some epic sunrises are atop your list of must-haves from a walk, you’ll want to tackle the Mount Oberon Summit Walk. Situated in Wilsons Promontory (near the Darby River walk) this steady uphill climb along wide gravel paths eventually gives way to a viewing platform with views that really has to be seen to be believed.

Better still, if you’re able to get an early start (incredibly early if coming from Melbourne CBD) and you can make the walk up in time (it’s around two hours return), you’ll be rewarded with one of the best views for sunrise in Australia. As soon as it starts to get light, you’ll be left gobsmacked by the 360-degree views of Wilson Promontory National Park. 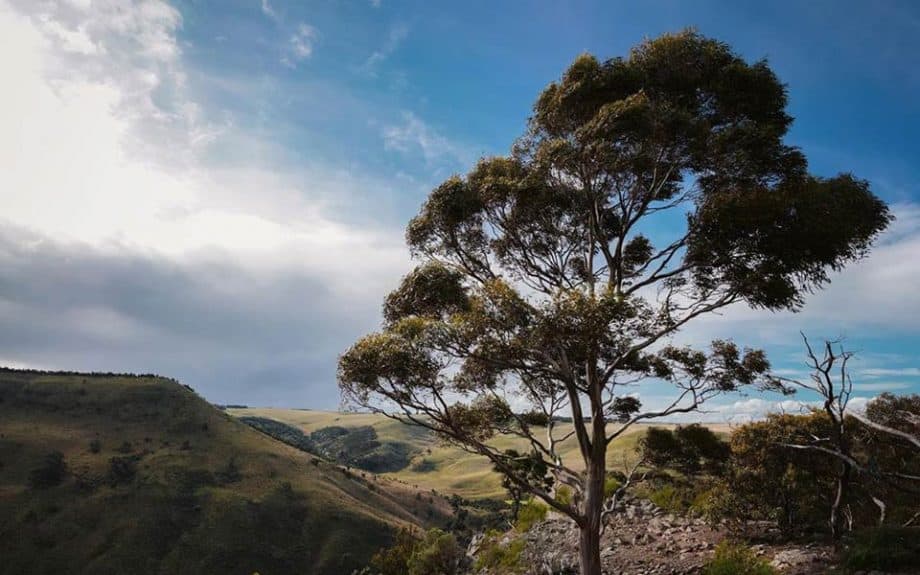 If the thought of a three-hour drive is a little much, even if it’s for a spectacular sunrise, then the circuit walk at Werribee Gorge may be more up your alley. Just an hour’s drive west from Melbourne CBD will bring you to Werribee Gorge State Park, which gives way to this 10km track. You’ll want your hiking boots for this one, as the terrain change throughout and there are some steep sections – including a section that requires the use of a cable handrail.

You can choose to complete the trickier section first and finish with a more gentle riverside track back to the car park, or start off easy before taking on the harder section at the end (there is a split off for a shorter circuit if you’d rather, though).

If you’re craving some scenic views with a picturesque lake, make sure you plan your next power walk around Albert Park Lake. Situated in the City of Port Phillip and located 3 km south of the Melbourne CBD, this Lake is incredibly convenient to get to. The surface around this trail is mostly flat, making it a popular running spot, too, as there are also water fountains scattered around to keep you hydrated at every corner.

Also, if you need a walking break, Boatshed Cafe is along the trail, the perfect place to down a milkshake while taking in the gorgeous atmosphere.

This trail firstly opened in 1888 and diverged off the Upfield line at Royal Park, running through the northern suburbs of Melbourne, across North Carlton and North Fitzroy. This “rail trail” is ideal for a range of sporting activities from hiking, bike riding to mountain biking and walking. It’s one of the more interesting Melbourne walks to partake in, as this area is surrounded by stunning parkland filled with the remains of the old railway lines.

Also, there is no shortage of great cafes in the area, and you can visit Yarra Park Bend while you’re at it.

If you’re craving a long hike with some breathtaking views, make sure you walk this trail, as The Bayside Coastal Trail covers 7km of Melbourne’s most stunning coastlines. This trail is incredibly unique, as it celebrates the artwork of many notable Australian artists who used the Bayside Coast as their muse.

With 90 art pieces along the trail, these works tell a story about Australia’s rich history and indigenous culture. Many of these pieces painted by indigenous contemporary artists are based on stories from Boon Wurrung Elder and Carolyn Brigg to portray the close relationship between the Boon Wurrung culture and the coastal environment.