A Guide To Wearing Dress Boots For Work & Play

Walk in impeccable style in these boots

More than just for walking trails and conquering glacial mountain tops, the boot has come a long way from the isolate realms of the great outdoors.

Learning the heel-to-toe benefits of wearing the designer boot is essential: its cross-purpose benefits and how it sits functionally in both your off-duty and formal wardrobe. Just a men’s dress boot, you ask? Let’s take a critical look at the humble piece of footwear and the many roles it can play. 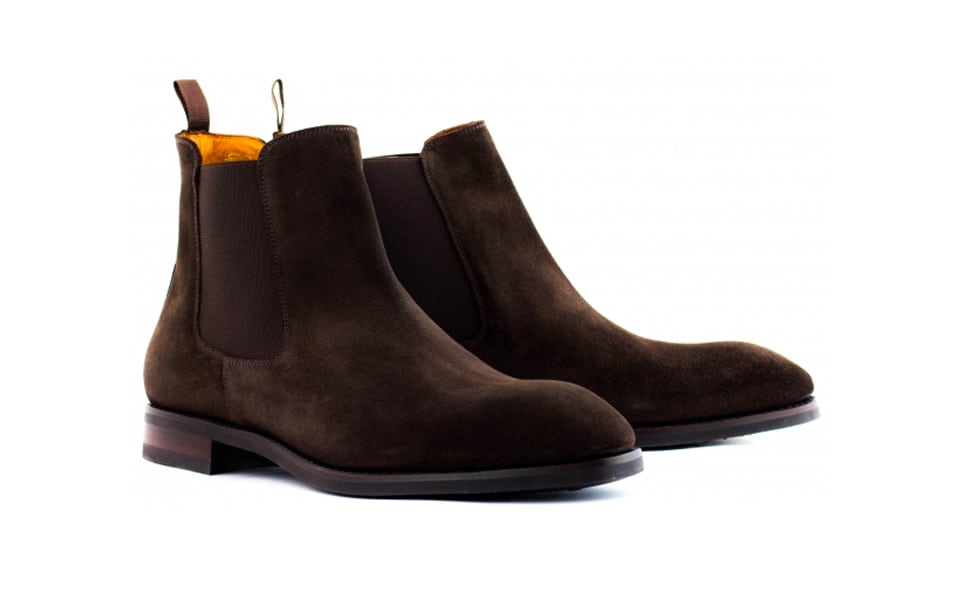 Victorian shoemakers invented the Chelsea boot and its elastic slip-on heel in rebellion against the constraints of the laces typically found on riding boots at the time of Queen Victoria’s reign. Fast-forward some few hundred years and the Chelsea was subject to a rebirth in the 50s, among East London’s art scene. The Beatles started rocking the lean-look boots with pinstripe slim suits on Abbey Road, while The Rolling Stones pared them down with leather rocker denim on stage. And the rest is sweetly-tuned fashion history.

The Chelsea, named after the London area in the city’s south-west, is iconic, stylish and here to stay. Equally as popular with bankers, as they are with indie types and tradies on the worksite (technically work boots are a chunky Chelsea), the Chelsea’s shoot (ankle part) is ultra-functional with its slip-on fit and mid-round toe for movement.

Its variation on heel height makes it versatile: flat for casual comfort and walking ease or slightly chunkier for shorter guys (no Cuban heel here) and more formal occasions.

How To Wear Chelsea Boots 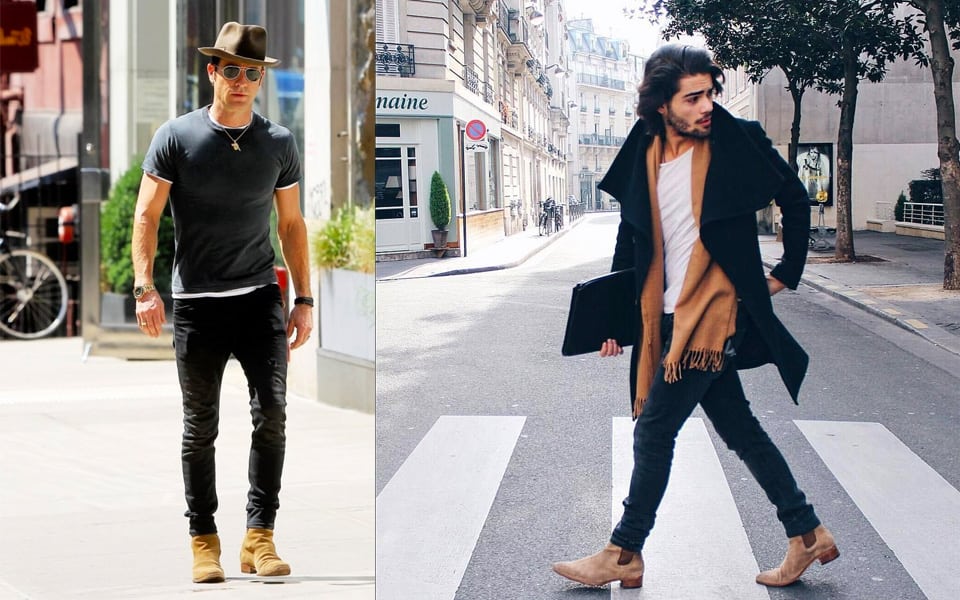 Of all of the boots, the Chelsea’s clean lines, smooth finish and lack of distracting detail make it the most refined for suits at the workplace. For the office, check out brands Adieu, John Lobb and Australia’s Aquila. Follow The Beatles cue and pair with Wall Street-look pin stripes or a suede leather bomber and jeans which ride just as well for the weekend. Rocker style Chelseas are currently offered from Edward Green, Givenchy and Dior. 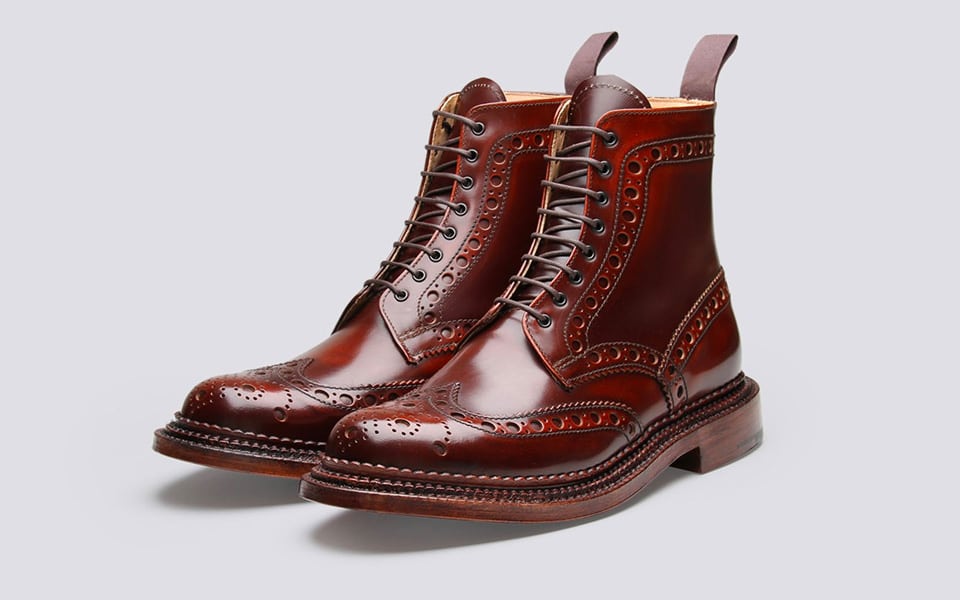 Easily recognised by its patterned hole punch detailing, the brogue is a British footwear classic. It originated in Ireland and Scotland and is typically made in a double-layer luxurious leather or suede. As a boot, classic colourways are typically brown and black but dark burgundy and tan are just as stately. Getting down to the finer details, two types of lace options wrap up the brogue: Oxford style, with enclosed lacing; and Derby, with open lacing. The wet-weather practicalities of the brogue boot have never been so useful.

The hole patterns are designed to quicken dry-time after the shoes get wet. But more than this, they are a stylish way to personalise your look and add textural depth to boots. The perforations have even evolved over time, forming sub-types of their own. They include: full brogue (narrow toe with wing-like extensions that run the sides of the shoe); half brogue (straight toe with holes along the seam and in the centre of the toe); and quarter brogue (slim toe with holes along the seam avoiding the middle section).

How To Wear Brogue Boots 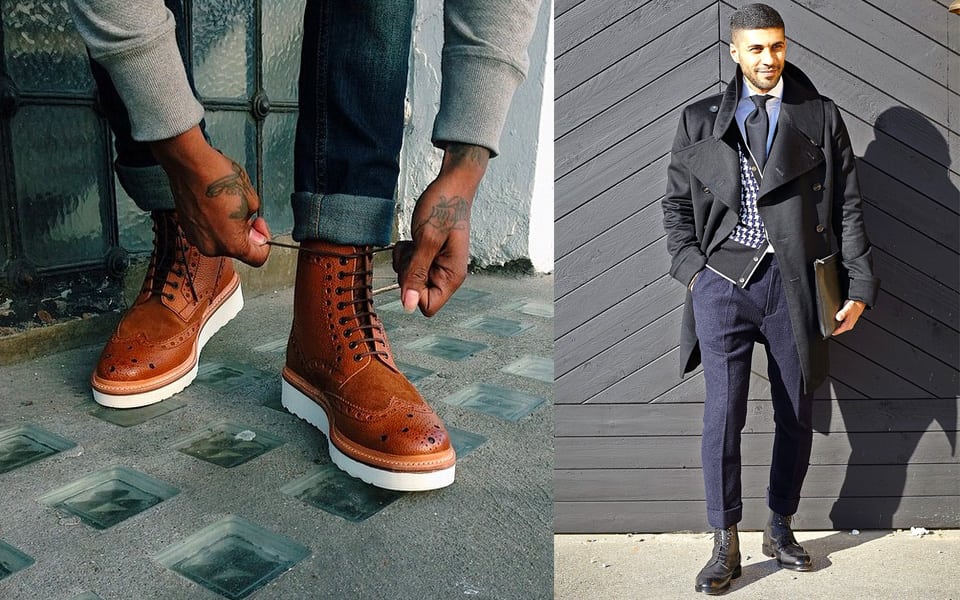 In recent years, the timeless brown brogue as a boot has found its place in the office – taken it’s not too chunky and tucked snug under slim wool trousers. Opt for a sharp black boot with cuffed camel chinos for a casual look and tweed blazer to gentrify the look. Some key brands include Mark McNairy, Hudson and Berwick. 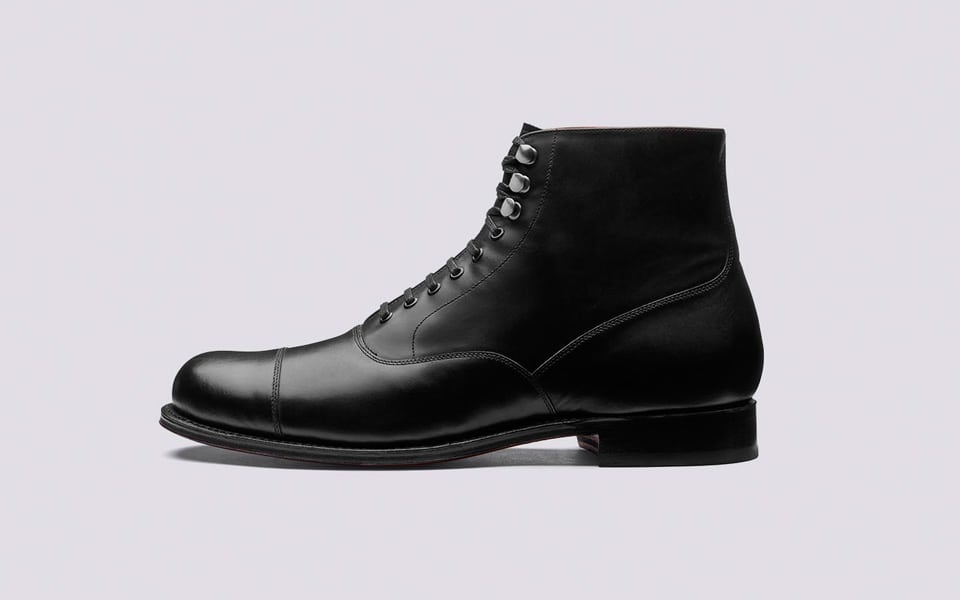 The Derby boot, like most boots featured in this post, is a hybrid made up of the original shoe form; the derby and the boot. The Derby distinguishes itself by its laces: eyelets stitched on top of the shoe vamp, creating an open front. Thus, they are more casual and your average boot will more often than not be made to this design. More heritage brands that kill this genre of boot include Tricker’s, Grenson, John Lobb, Loake and Church. Contemporary makers of the derby include A.P.C, Kurt Geiger and Reiss.

How To Wear Derby Boots 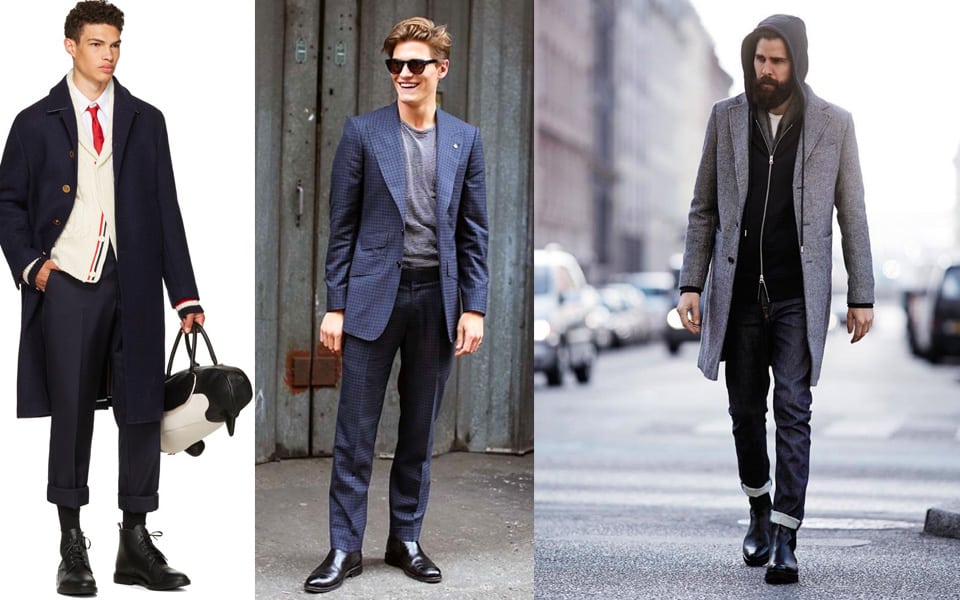 The casual, hardware look of the derby (remember: open lace front panels when tied up) make it a more clumsy choice for suiting. So avoid it for super corporate looks (never with a tux). Derby boots work well with chunky look wool trousers or smooth khaki chinos and are in their rugged element with outdoor-look cottons and linen, rolled up at the hem. For a Nick Wooster-inspired look, pair with a patchwork blazer, plain tee and tailored shorts, for a show-them-off street vibe. 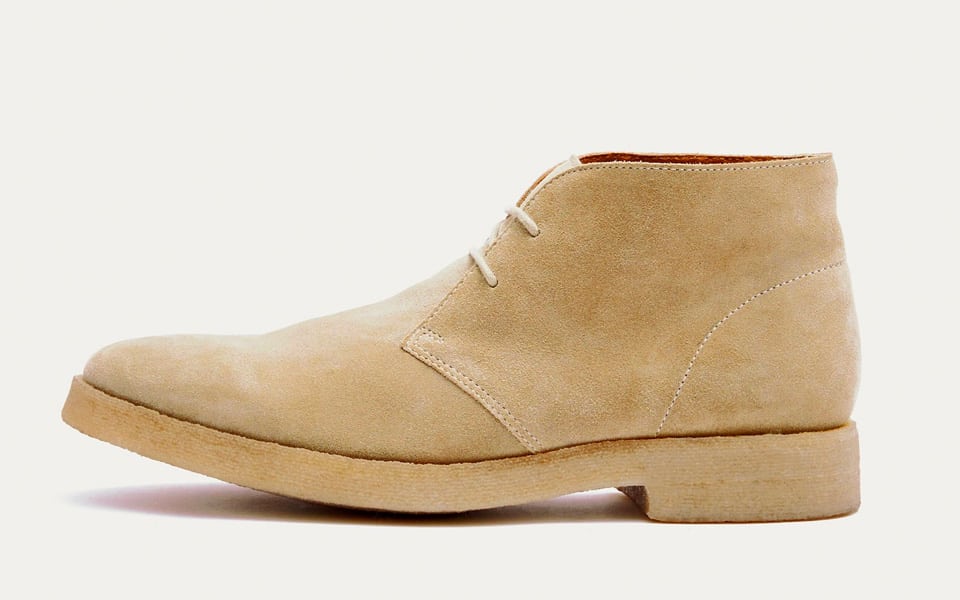 Traditionally made in suede or calfskin, the chukka gets its roguish name after a period of play in polo, the ‘chukker’. Moving on from its origins in posh sports, the chukka boot in contemporary times saddles-up nicely as a prominent designer boot.

The shoe saw a real resurgence a few years back with classic British school shoe maker, Clarkes, and its rebranded idesert boot. From London to NY to Sydney, the boot took off. As well as Clarkes, other makers of the Chukka include Paul Smith, Lacoste and of course, Polo Ralph Lauren.

How To Wear Chukka Boots

Chukkas work as a super casual outfit with relaxed jeans, while black skinnies or tailored chinos offer a more smart casual vibe. Tuck the jeans slightly into the shoe to expose the unique. For formal events (and very corporate offices) the Chukka boot doesn’t really work and can make sharp tailoring look shabby. Some gents do pair Chukkas with casual suit looks but always wear the trouser hanging over the boot shoot (ankle) to almost mask the fact it’s a Chukka. 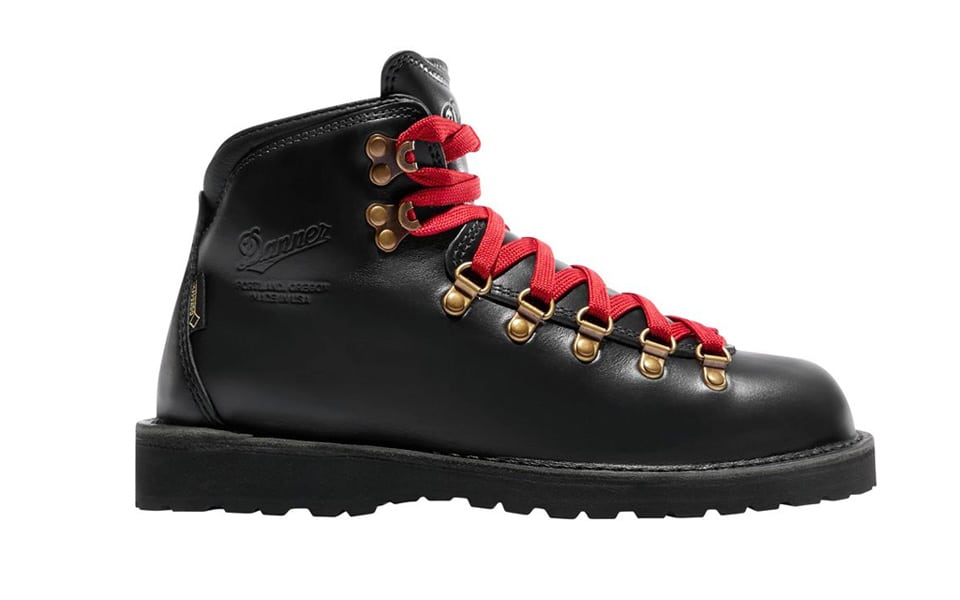 For a look that is a little more adventurous and rough, the hiking boot is the perfect shoe. Sturdy, tough and extremely practical, it is a boot with a big reputation on the runways of late – that remains stylish too, when worn with the right outfit. Key makers of the hiker include authentic outdoor brands the North Face, Timberland and Camper. More fashion types come from Car Shoe, Topman, Anthony Miles and Selected Homme.

How To Wear Hiking Boots 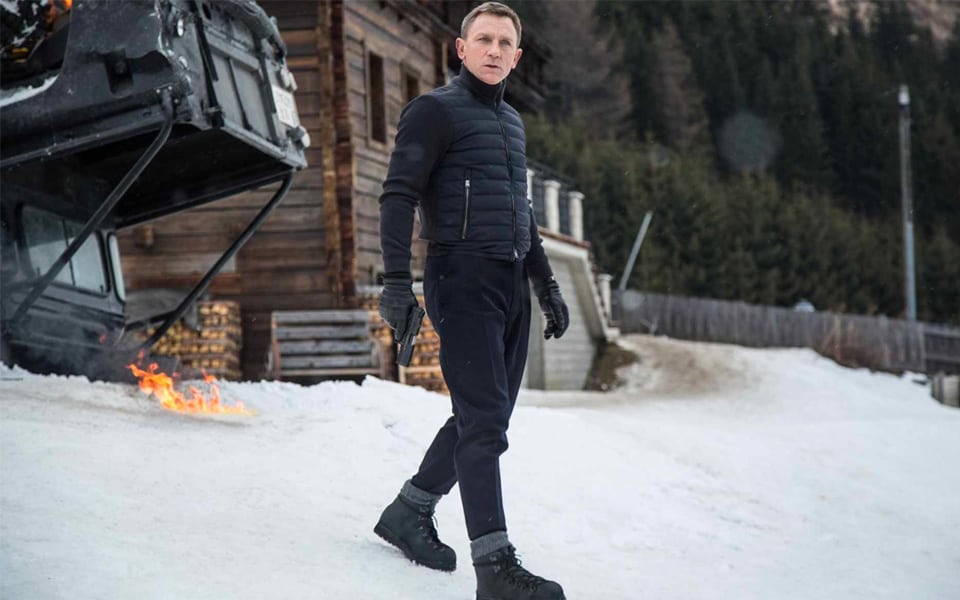 The hiking boot looks best with clothing of the same theme. That is, wearing similar outdoorsy coats and woollen pants that bring to life the nature of the boot itself. Rock climber and English gent-inspired pieces work the best, opting for think chunky knit jumpers, wax coat jackets, tweed wool blazers and cord trousers. Like the shoe, dense and heavy duty from the sole to the shoot, your outfit should also be layered – don’t be afraid to play with different fabrics and textures. Keep this boot well away from the suits and the workplace – unless you’re a Himalayan mountain tour guide. 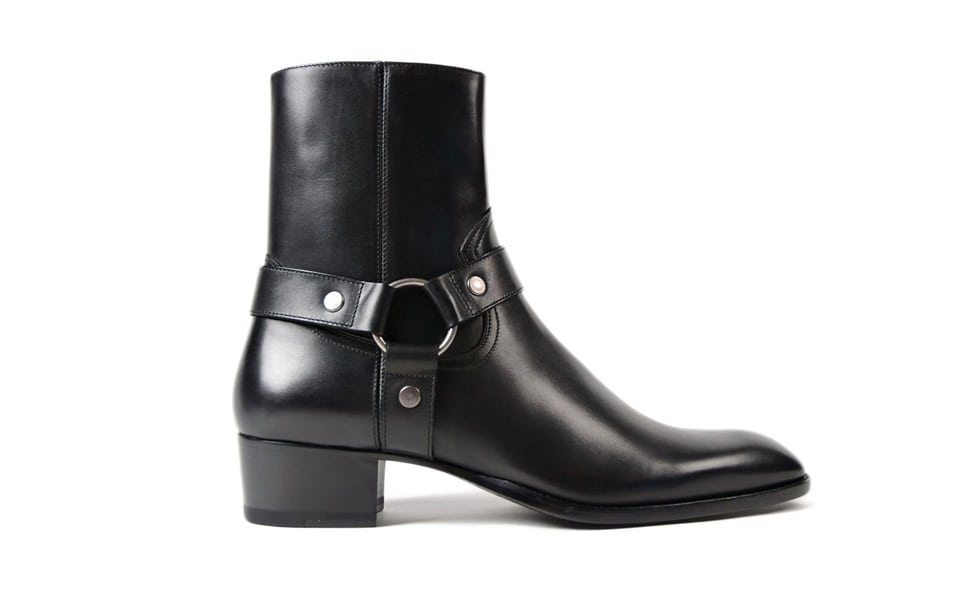 The vintage Americana trend is rife in menswear this season. So a boot, the biker, inspired by Hollywood great, Marlon Brando, rides well in today’s wardrobe. Not just for Harley Davidson fanatics, the biker boot is great way to add a bit of wild-child to your look without actually having to touch a motorbike. High-end options include Gucci’s double-strap boot and Jimmy Choo’s Stanford. More ‘biker’ options are available from Allsaints and H by Hudson.

How To Wear Biker Boots 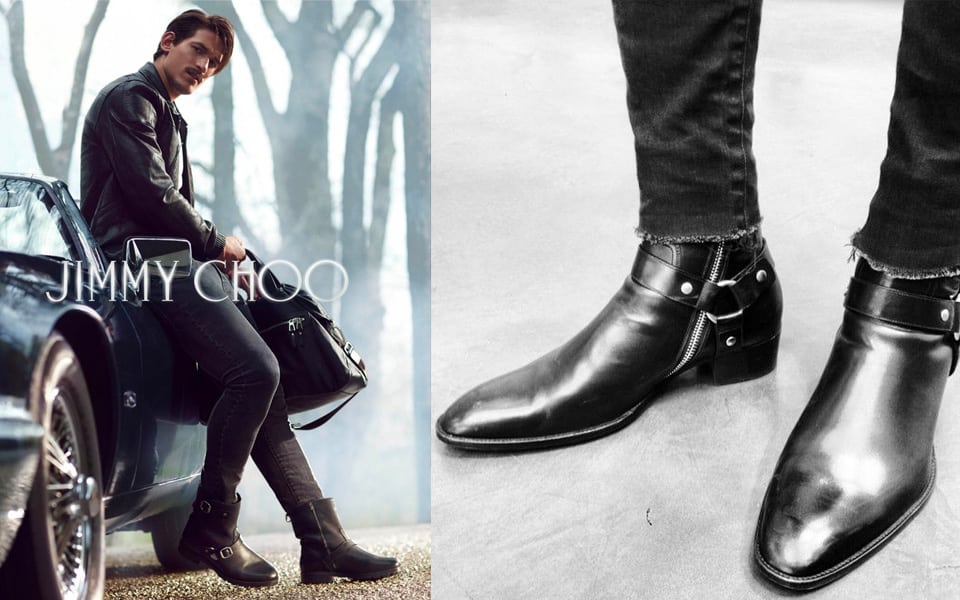 The shoe works best in theme. So pair with a Belstaff leather jacket, plain tee and black biker jeans (just like David Beckham). Meanwhile, a relaxed trouser fit will give the outfit a more casual feel – think pleated wool pants and cable knit.