The Perfect Linen Shirt Can Instantly Sharpen Your Summer Style; Here’s How To Pull It Off

Get your kit off…but keep your cool shirt on.

When the weather’s high it’s not just about your t-shirt tan and an excuse to wear shorts to work – it’s also high season for the natural fibre known as linen. For the unacquainted, linen is a highly breathable fabric which is soft, naturally crumpled and light, making it the ideal layer for spring and summer styling. We’ve already taken a look at how to wear linen suits and today we’re taking aim at its cousin – the linen shirt. Ready to learn how to wear a linen shirt with style? Lather up the sunscreen and listen up. 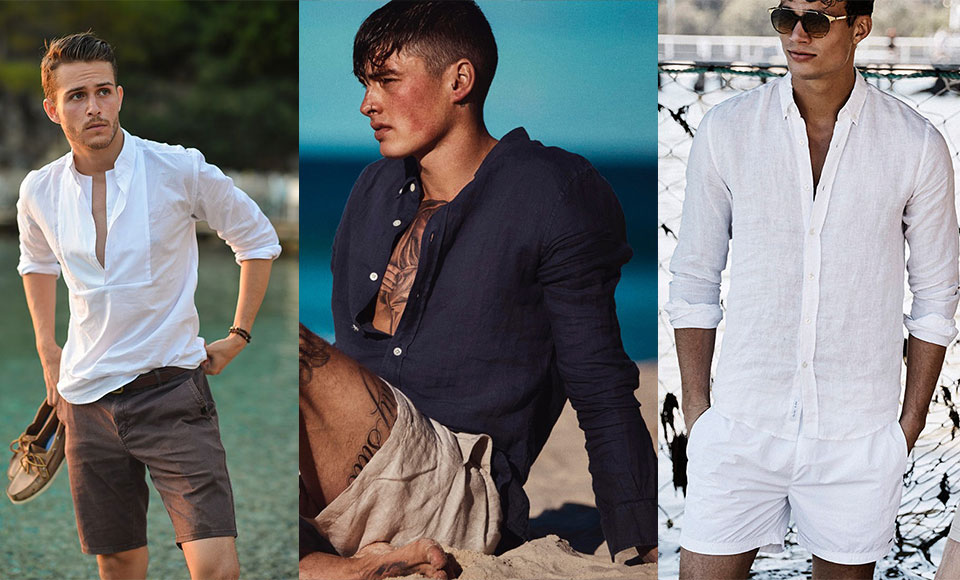 A classic combo of the linen shirt are shorts. Not just any old shorts though, these need to be nicely fitted shorts which we’ve spoken about that are cut just above the knee for a sharper look. When it comes to linen shirt choices there are plenty in collar style, colours and patterns. The most important thing though is the fit. A button up linen shirt should be breezy but never baggy. As with any good dress dress shirt, you don’t want the cuffs to extend past your wrists or the shirt to look loose otherwise you’ll look more like a father of seven kids. Cool colour combos you can try include pastel shorts with a white linen shirt, navy shorts with a blue linen shirt or any good contrasting colours. 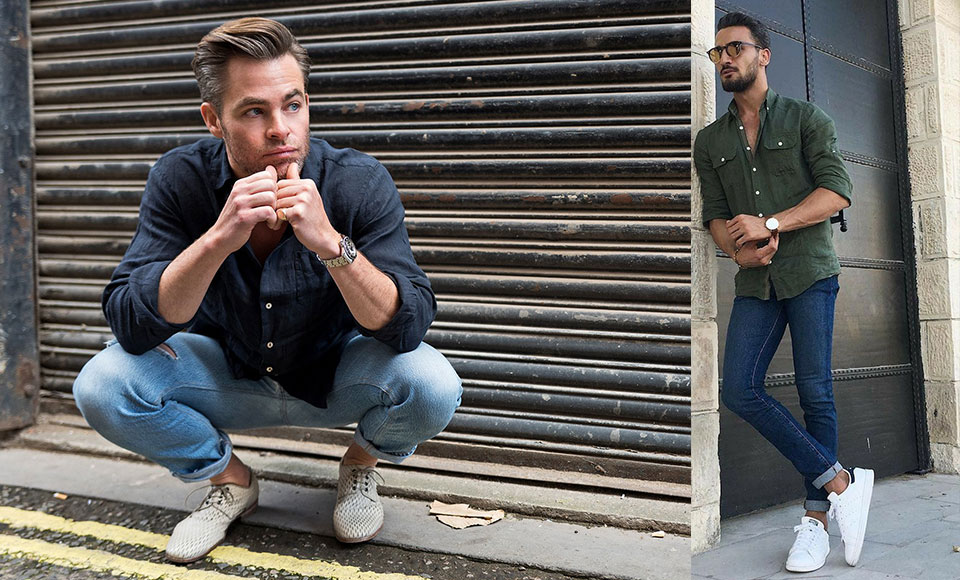 Jeans go with almost anything and the linen shirt is no different. Pair a slim fit or skinny fit pair of jeans with a long sleeve linen button up and you’ve got a weekend warrior’s outfit. Both black or indigo denim can work in these cases so long as there’s contrast in both pieces. An extra touch of style can be added by rolling up those sleeves to just below the elbow and throwing on a pair of casual shoes (lace-ups and white sneakers work best here). Simple, stylish and definitely summer-ready. Just remember what we said about linen shirt fitment – keep it slim to the body and never baggy. 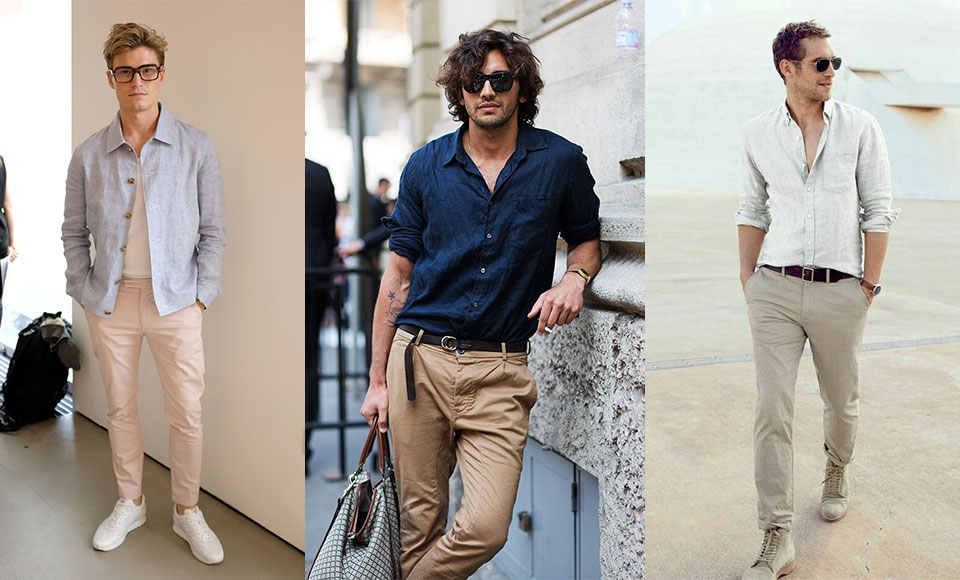 Taking linen into smart casual territory is the chino combo. For a truly stylish summer aesthetic, this is the look you’ll want to pull off. It’s simple to throw together, insanely cool and has the versatility of layering for extra style points. Lighter chino colours work best with linen shirts given the time of the year so think khaki, cream, sand or pastel variants. The linen shirt meanwhile can be worn with the sleeves rolled up or down. Good colour contrast is once again key here and men shouldn’t worry too much about the un-ironed look of the linen shirt – it’s part of the charm and adds to linen shirt-chino combo. The linen shirt doesn’t need to worn as a single layer though. Men can wear a fitted tee underneath so that the look is ready for the cooler summer nights.

Linen Shirt With A Jacket 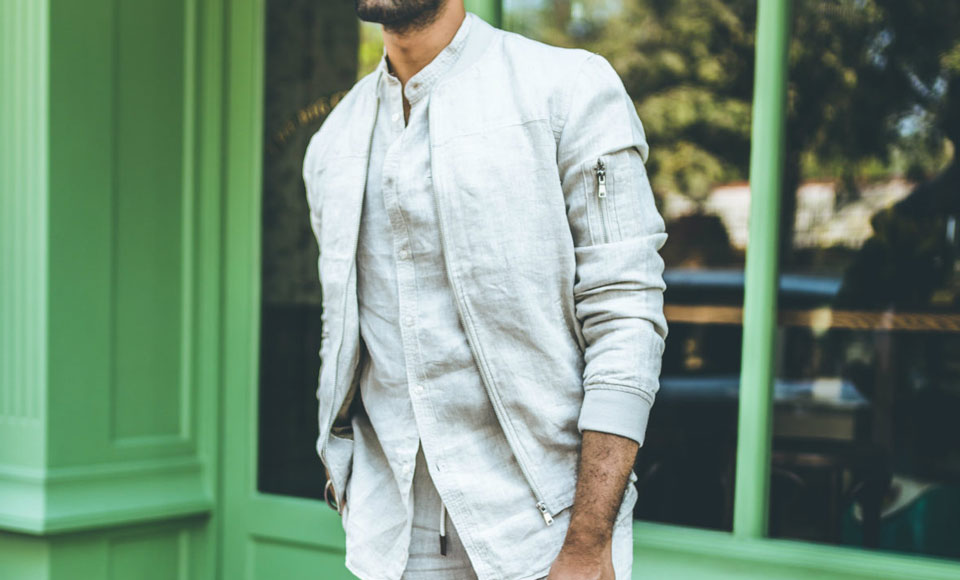 Linen shirts go with almost any type of jacket (save for a tuxedo jacket perhaps) so the only rule you’ll need to follow here is whether the linen shirt is tucked or not. Whilst mostly worn untucked in casual scenarios, you don’t want a linen shirt that is too long. If it is, it’s likely that the shirt size is wrong for you and you need to size down. Beyond that linen shirts are perfect company for bomber jackets, field jackets, cardigans and most other forms of jackets including the blazer which we’ll talk about below. 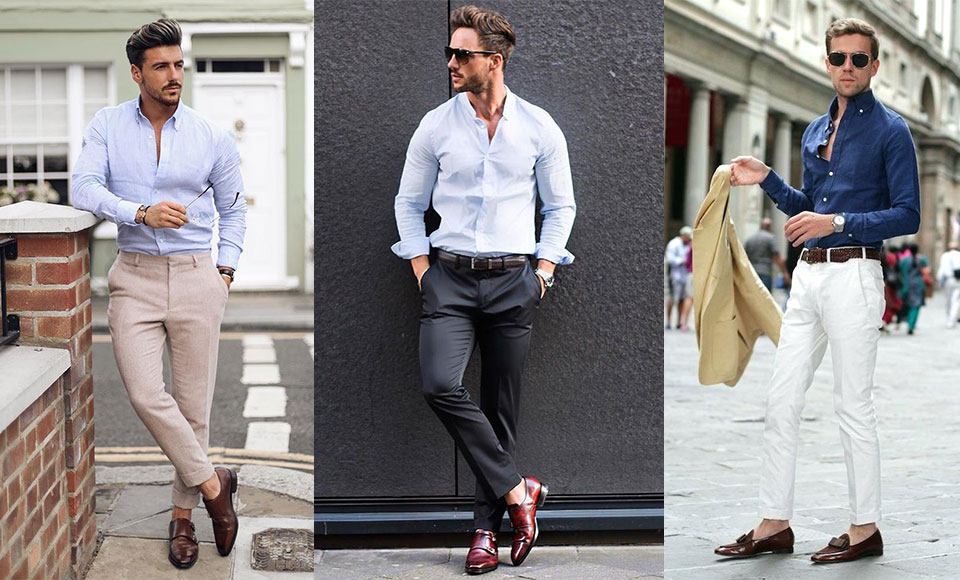 And you thought linen was just for cruisey laid back lads. As we move into more polished territory the linen shirt can shine with a perfect pair of tailored trousers. The general rule is to keep the sleeves down but if it’s a casual workplace or the weather heats up, there’s nothing wrong with rolling those sleeves up. Another rule you must abide by is the shirt tuck. As with any dress shirt in formal situations, the linen shirt needs to be tucked into the trousers. Don’t worry too much about the boss complaining about the wrinkles, just tell him it’s meant to be like that before taking his coffee. As we mentioned, colour contrast between trousers and shirt is the secret here as are shoes or loafers without socks.

Linen Shirt With A Suit 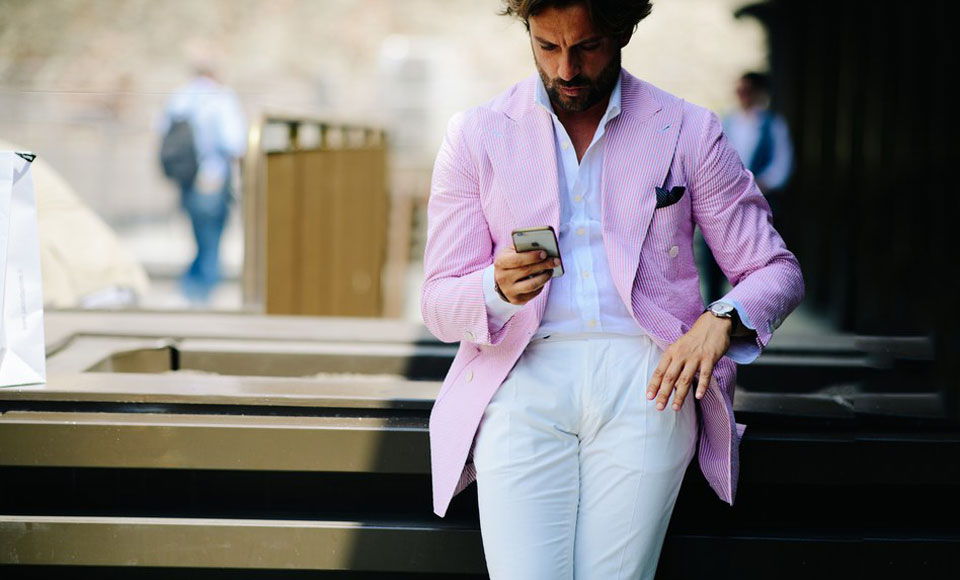 Finally we get to the full suit combo. This isn’t the linen suit that we’ve already explored, this is the linen shirt worn under the suit. As you can see, linen shirts can provide a great contrasting texture even if they’re the same colour as the trousers. It’s harder to pull off but definitely doable with a suit. Just remember to keep the fitment slim and the shirt tucked in. When it comes to shirt and suit pairings, treat it like you would any dress shirt in a suit. Keep either the shirt or the suit muted – not both. For example, a navy suit with a white linen shirt or a navy linen shirt with a grey suit. Pull this off and you’ve got the full sartorial spectrum of this awesome and often overlooked fabric.