Getting mobbed by fans and paparazzi every time you stepped out of a building would really suck – hence the celebrities that just brush off their fans to continue about with their day. So it makes it all the more memorable when one of them stops to sign autographs and take time out for the screaming hordes.

That is exactly what Jon Hamm did when he was spotted in New York, he took the time out to sign multiple autographs before continuing about his day. The movie star was in the city at the Build Series studio to discuss his latest film Lucy in the Sky that stars Natalie Portman. Hamm stars as an astronaut in the science-fiction drama that Portman’s character has an affair with after she returns from her mission to space but it’s his fashion on the ground that is getting us talking.

Last time we saw Hamm he was at the premiere for Between Two Ferns: The Movie and he was caught making a basic fashion faux pas. In fact, a brief look through our style pages suggest it’s all or nothing with Hamm, he either emulates Don Draper or he looks like the rest of us. His latest outfit is a casual look but the combination of the bomber jacket and the blue-tinted sunglasses emulate cool. 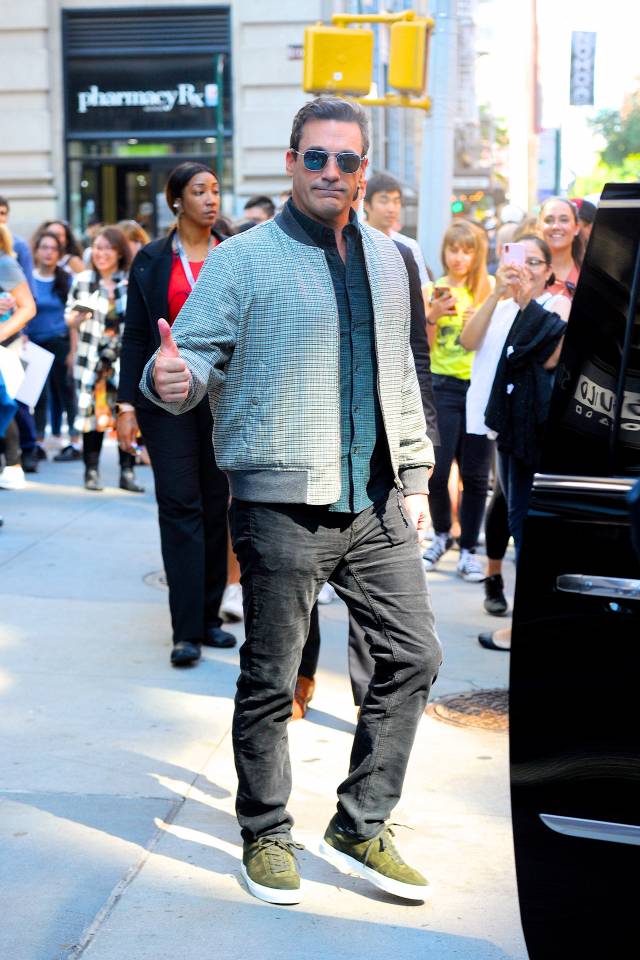 The green & blue plaid shirt was the same one that he was seen wearing in the Build Series interview but styled up with a Rag & Bone reversible bomber jacket. Hamm chose not to wear the corresponding pants, which may have been a bit much instead opting for simple black jeans. The reversible bomber jacket was worn with the multicoloured puppytooth check-weave on the outside, arguably cooler than the simple black on the other side. The blue shades looked perfect on the actor despite potentially not having the desired anonymity effect and frankly the less said about the sneakers the better. The dark green shoes detract from the whole look so best to keep eyes up for this one, which is exactly what his mob of fans did.

Full credit to Hamm he stopped and took the time out to sign autographs for people, despite the unimpressed look on the handler behind him. He even at one point gave the thumbs up to the paparazzi, much better than the usual bird they get flipped. It’s his casual attitude that probably keeps people talking about him and watching out for whatever he does next and he has certainly been busy. Not only has he had his two films but he also recently starred in Amazon series Good Omens and wrapped up his role in Unbreakable Kimmy Schmidt earlier this year.

He still has plenty of red carpets left to walk this year with roles in The Jesus Rolls and Richard Jewell but perhaps the film we are most excited to see him in is Tom Gun: Maverick. The sequel over thirty years in the making will fly into our screens soon starring Tom Cruise in the titular role again and Hamm in an as-yet-unspecified capacity. The entire film is still very hush-hush, with no plot details being given and the trailer offering a few glimpses of the stars as well as of course the fast planes.

We will be keeping our eyes peeled for Hamm’s red carpet looks at these premieres, hopefully he wows us again.