Melbourne is the Australian city lauded for its nightlife, but rather than mingle with hoards of vodka guzzlers at ground level, set your sights a little higher and look to some of the city’s finest rooftop bars.

Here are the best rooftop bars Melbourne has to offer, so you can enjoy a cocktail, beer or vodka lime and soda all at high altitude.

In this Melbourne rooftop bars story…

Easey’s had a grand idea one day to get an old train and put it on top of an office block in the middle of Collingwood, which seems anything but Easey in our humble opinion. However, despite this initial experimental concept, Easey’s has become one of Melbourne’s best rooftop bars. With a comprehensive list of cocktails, beers, wines and all the basic spirits covered, Easey’s is the place to go if you’re looking for casual drinks with mates.

A creation from the folks behind North Melbourne staple Fancy Frank’s, Good Heavens brings a classic combination of cocktails and good old-fashioned southern American cuisine to an upstairs setting more geared towards the classic Melbourne city-slicker.

It’s not exactly ground-breaking with its take on inner-city tropical décor, but the food is good and the cocktails are boozy enough for you to lose yourself in the heavens pretty easily.

Less of a rooftop bar than it is simply a really good pub that happens to have an open-air rooftop, the Marquis has a more seasoned history than most Melbourne drinking establishments and has been a Fitzroy favourite for years, both before and after it closed and subsequently re-opened.

The rooftop has everything you could ever want on a summer’s day boozing with the lads: a bathtub famously full of international tinnies and century-old architecture fitted out with breezy 70s décor.

The idea of “Project Spaces” combining with bars is a New York staple that’s slowly working its way into Australia’s bigger cities, but Loop Roof’s rooftop bar adds a little more extravagance to the idea.

Loop Roof combines dense foliage, botanical-inspired cocktails, and garden furniture with the modern fit-out of Loop Project below, making for a surprisingly relaxing space in the middle of the city to smash back a few bevvies on a sunny day.

A classic example of capitalising on an already fantastic idea, the folks at Fonda Mexican decided to take the success of their Richmond eatery and further it with a brand-new rooftop location in Windsor.

Its menu features all the things that made Fonda so successful, with fusion burritos, iced Horchata and $10 Paloma cocktails, only this time you can enjoy it all as they would in Mexico. Just make sure you arm yourself with a sombrero to escape the merciless summer sun.

Johnny’s Green Room is on the site of the old Johnny’s, a bar which locals will know as being one of the best spots in Carlton. This reincarnation of Johnny’s now offers guests a rooftop bar that serves up 360-degree views of Carlton and out to the CBD. If it’s Italian-style charm you love and you want to feel like you’re in Rome, while sipping on a negroni, this is the best place to be.

Set on the roof of the heritage-listed The Rivoli cinema building, Nineteenforty (named after the year Rivoli Cinemas opened) is a celebration of everything old-world, art-deco and timeless.

They’ve decided to go for a garden-inspired fit-out for their rooftop bar, which plays host to a menu of old-world cocktails and bar snacks.

Nineteenforty also makes for the perfect setting for either a few pre-dinner drinks or even somewhere to continue the evening once you’ve finished up watching a movie in the cinema downstairs. 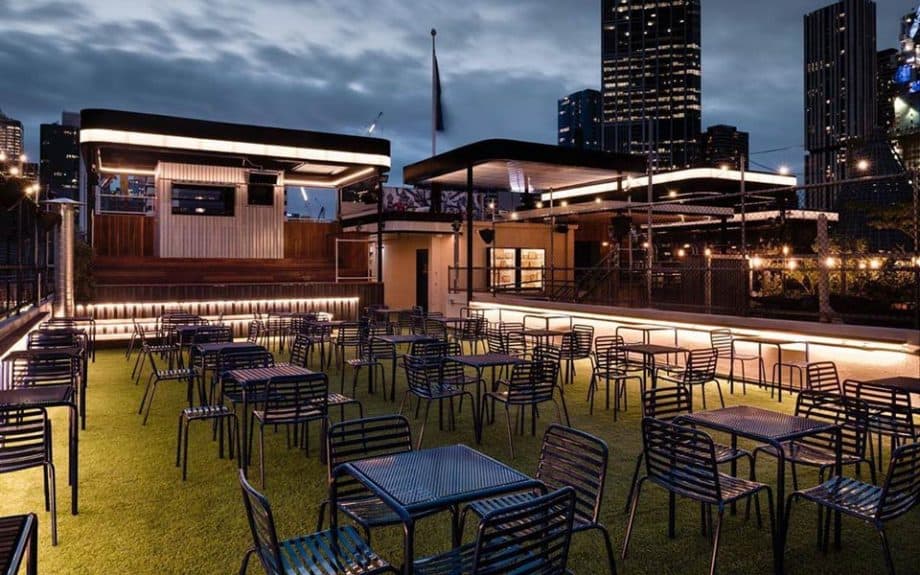 We’re not sure how much was paid to secure the naming rights to this venue, but there couldn’t be a more appropriate title for a bar anywhere else in the world. Situated on top of Curtin House (don’t worry, there is an elevator), which also houses the Toff in Town, one of Melbourne’s best live music venues, Rooftop Bar does – and is – just what its name suggests.

This innercity drinking hole offers sublime views over the CBD and a well-stocked bar serving cocktail classics such as margaritas, mojitos and espresso martinis. Food is supplied by Burger Shack and in the summer, it turns into a rooftop cinema. All in all, Rooftop Bar is the perfect venue for a night of shenanigans.

This lively bar atop the Imperial Hotel is often thought of as one of the best places to watch sport in the CBD, as it overlooks the city skyline and has incredible views of Parliament house.

Imperial Hotel is one of the oldest and most popular bars in Melbourne, thanks to its excellent pub food and glorious sport viewing parties happening right in the heart of the city. It’s also close by to the Princess Theatre, making it the perfect stop-off, either before or after a performance. So kick back with a lager and enjoy all that this chic rooftop beer garden has to offer.

If you’ve been to Melbourne a fair few times, or you live there, when you think of a rooftop bar then you have to think of Naked for Satan. This Fitzroy-based drinking institution may have a downstairs bar, but is well-known throughout the city for the views and brews being slung upstairs.

With tapa-inspired small plates, house-infused vodka you simply have to try and one of the absolute best views in the city, Naked for Satan has it all.
Naked for Satan

If you’re looking for a super trendy rooftop gin garden with a rustic vibe and some of the finest cocktails Melbourne has to offer, then make sure you check out Union Electric Bar & Rooftop Gin Garden. This little hidden gem tucked away under the lightning bolt on Heffernan Lane in Chinatown serves delicious cocktails, craft beers, gin, rum and old school hip hop tunes.