Looking for some stylish taper fade inspiration? Or do you just want to know “what is a taper fade?” well, you’ve come to the right place.

When it comes to short hairstyles, and haircuts for men on the whole, you’d be forgiven for thinking the minefield of cuts would be pretty simple to navigate, but you couldn’t be more wrong. Despite a lack of length when concerning men’s short haircuts, there are actually myriad options to choose from

One such option that you may not be aware of is the taper fade.

What Is A Taper Fade Haircut?

A taper fade is essentially a combination of a taper haircut and a fade haircut.

Taper, by its very definition, means to gradually get smaller towards one end, or as is the case with haircuts, to gradually get shorter. If you’re someone who likes to keep some length on top of their head, but can’t tolerate longer hair around the sides of the head, the taper fade could be your saviour.

The main difference between a fade haircut and a taper fade haircut is that with a fade, the hair all around the headline will be cut at the same level, a taper fade, generally, only concerns the hair on the sides of the head, over the ears (although will also extend to the neckline so as not to be completely out of proportion).

It’s an incredibly versatile haircut too, as you can choose whether or not you have your hair cut down to skin level (something that is far more common with regular fade haircuts), and you get to decide how long you leave the hair on top.

The taper fade differs from the classic taper in that, with the latter, the hair is generally kept at a similar length around the sides, although may get ever so slightly shorter as it approaches the ears. A taper fade will see a more gradual change as you move down to the ears and neckline.

What Are The Best Taper Fade Haircuts For Men?

But of course, within the taper fade hairstyle, there are several variations from which to choose from, and your face shape or hair type may dictate which one is best for you. And so, to help you through the dizzying world of taper fade haircuts, we’ve compiled together a list of some of the most popular options, complete with images so you have something to take to your barber with you next time you need a cut.

What is the difference between a taper, a fade and a taper fade?

A taper and a fade can be easily distinguished. A taper hairstyle will see the hair on the sides of the head gradually get shorter as it gets closer to the ears, but doesn't have to expose skin. A fade will have a more distinct line and contrast between the longer hair and the faded hair. A taper fade is essentially a combination of the two, where the hair gets shorter to the point it fades to skin level.

Should I get a taper fade haircut?

A taper fade haircut is a great option for men with virtually all face shapes because of its versatility. The length and starting point of the fading section can be adjusted according to your face and hair type, so there will definitely be a style to suit you. 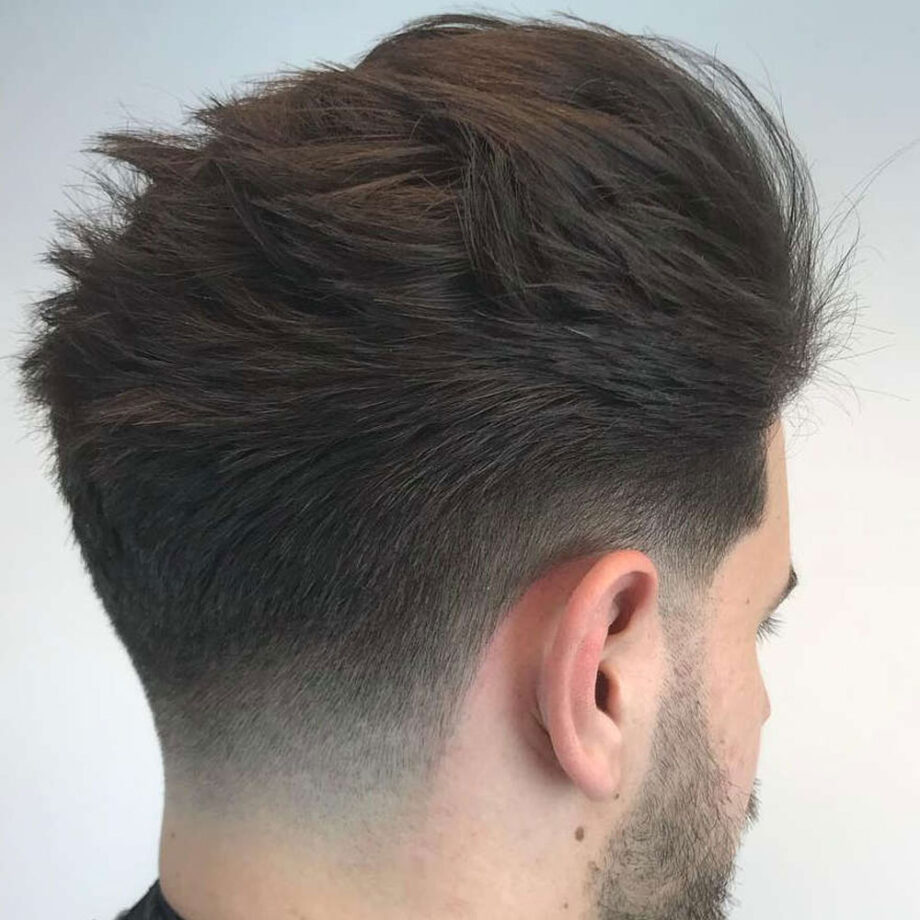 The low taper fade haircut is for men who don’t want to change too much about their hair, but just want it to look tidy. As the name implies, the low taper fade starts low on the head, pretty much just above the ears. From here, the hair is gradually made shorter until it joins with the upper portion of your jawline, where your beard or stubble would start growing.

The low taper haircut will follow the hairline around to the nape of your neck to keep everything in check. Because of a general lack of contrast compared to what you would get with a mid or high taper fade, the low taper fade can work wonders with medium length hair, or even long hair, because it will help accentuate the tapering effect. 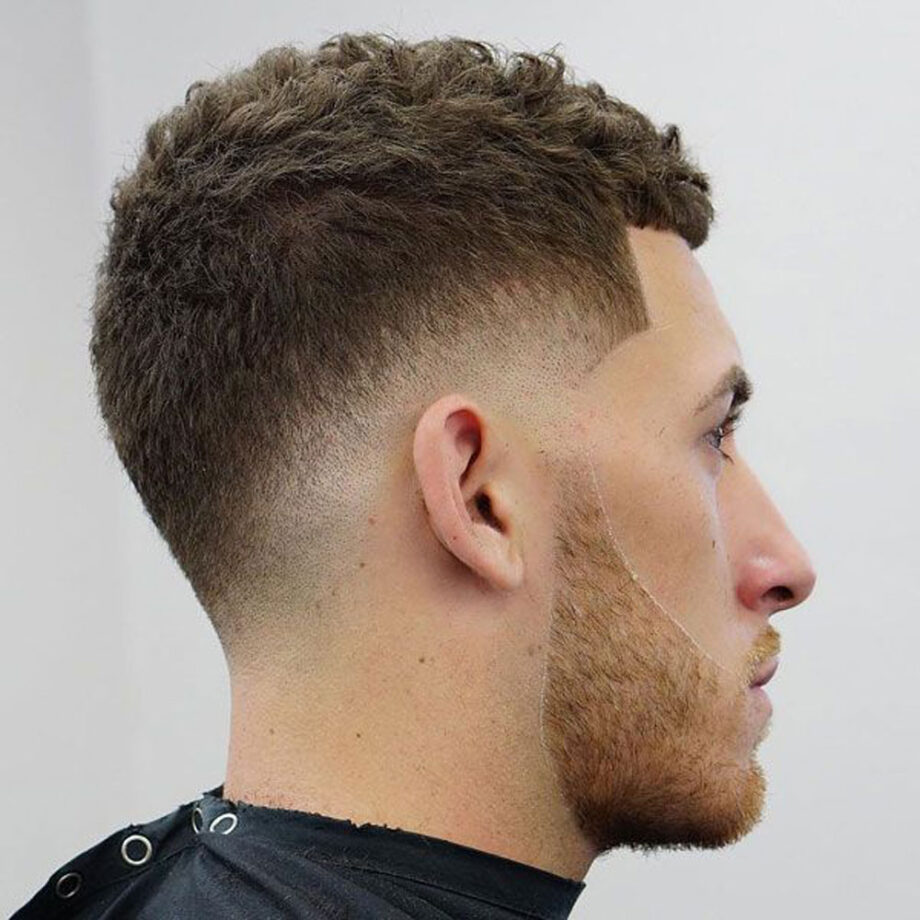 The mid taper fade haircut could be regarded as the perfect haircut for most men, due to it offering all the stylish benefits of a fade, without the intense, drastic nature of showing a lot of skin that you’d need from a conventional fade. A mid taper fade begins mid-way up the sides of the head, roughly in line with your temple, and will see the hair gradually become shorter as it moves down toward your cheekbones. The rate at which it gets shorter is up to you. You could, for example, have it transition down to a number 1 or 2 on the clippers, to leave some hair around the ears. Or, you could go for greater contrast and end up on a grade 0, showing off some skin.

Whichever option you choose, the mid taper fade is a great option for those wanting to take some weight off of their hair, particularly benefitting those with thick hair. It also means you’re able to let loose a little more with how you style your hair on top as, like with the low taper fade, the mid taper fade works well with slightly longer hairstyles such as pompadours and quiffs. It is also a great option for men with curly hair, or even those with less intense wavy hair. 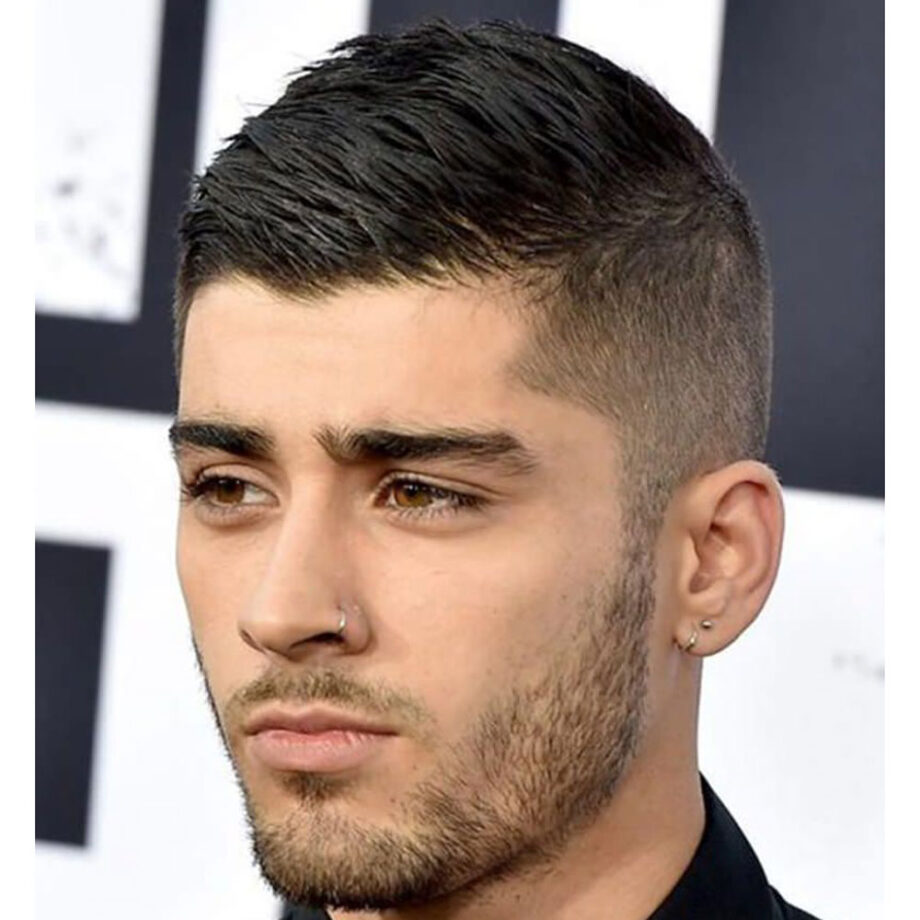 Rounding out the main three styles of taper fade is the high taper fade. No prizes for guessing what defines this haircut; the fade starts even higher up the head, encroaching onto the crown. The high taper fade offers up the greatest contrast between the hair on top of your head and the sides (naturally) so provides a perfect playground to play around with styling longer hairstyles such as pompadours and afros, but can look equally as good with short hairstyles such as crew cuts and the Caesar haircut.

High taper fades should definitely be considered by men with thick hair, since the extra density will add even greater contrast (which is what you’re going for in the first place if you opt for this cut) but that’s not to say men with thin hair can’t benefit, they just may need to consider the length on top. 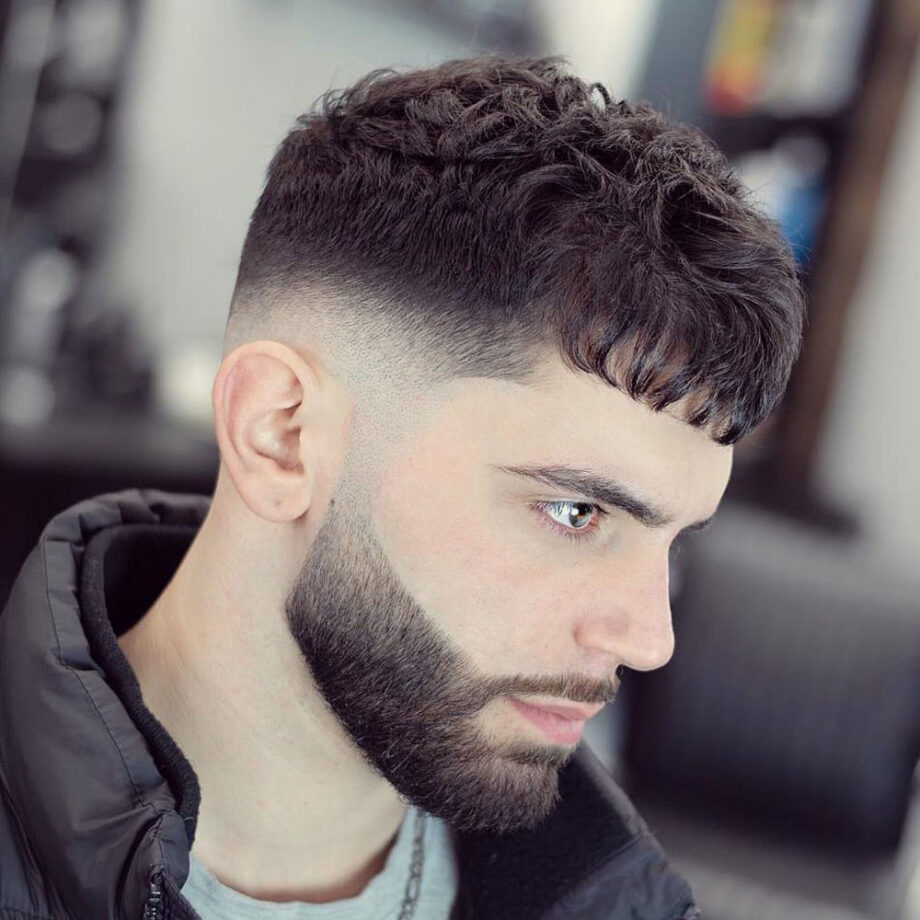 The Caesar fade is an incredibly stylish alternative which, despite its historical associations, is wholly modern. The Caesar fade, unsurprisingly, takes the Caesar haircut, and adds in a fade. To achieve an effective and authentic Caesar haircut, you’ll want to brush and style your hair forwards, resulting in a short fringe, as opposed to spiking it up or parting it to the side. Once that’s done, you can add in a taper fade, and for the Caesar, we’d recommend a mid to high fade to help accentuate the forward motion of the hair on top. This hairstyle suits men with thick hair, such as those from multi-cultural backgrounds. 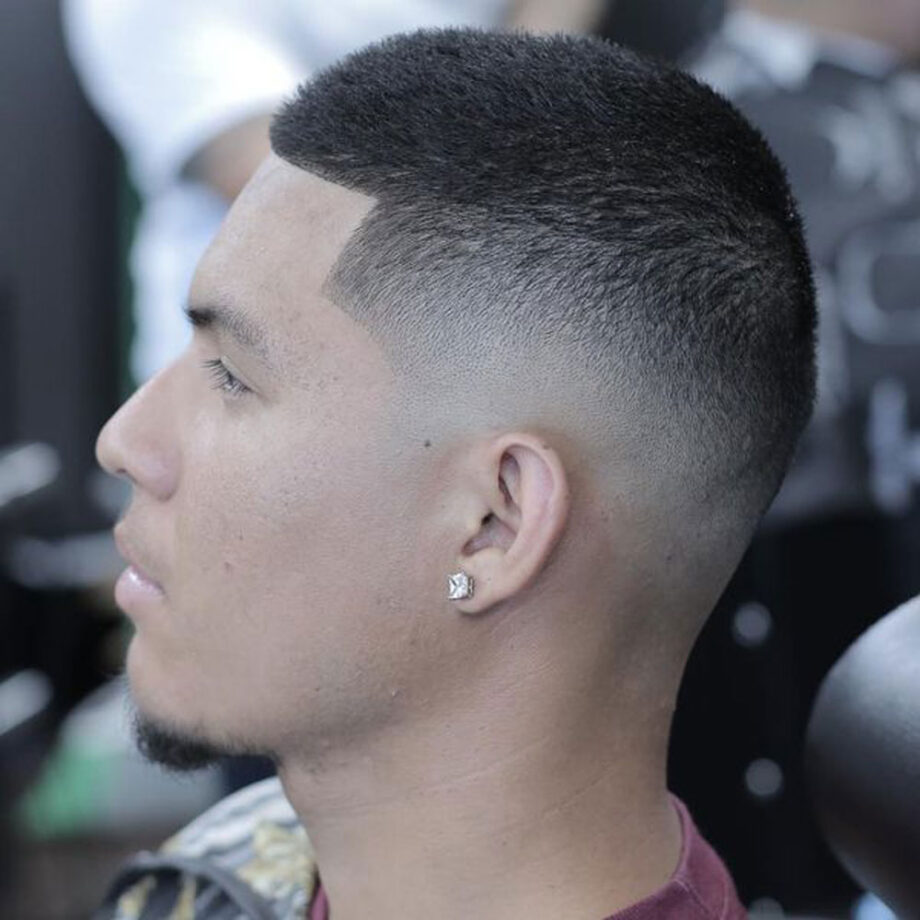 You might be wondering, how can someone have a taper fade haircut if they’re bald? Well, when we say bald, what we actually mean is just incredibly short hair. Men who have a military-style buzz cut, or even a butch cut, will have very minimal hair on top of their head, and so pairing with a high taper fade will help to distinguish that short hair from no hair on the sides of the head. This will result in a high and tight finish that can look super cool. It’s the ultimate in low maintenance and will help keep you cool in the summer months.

A bald taper fade also allows you to show off your personality through your clothing choices instead, which is no bad thing. Just bear in mind that because of the sheer lack of hair covering your head, that you don’t have any scars or other blemishes that you don’t want other people seeing, as they’ll be exposed front and centre. 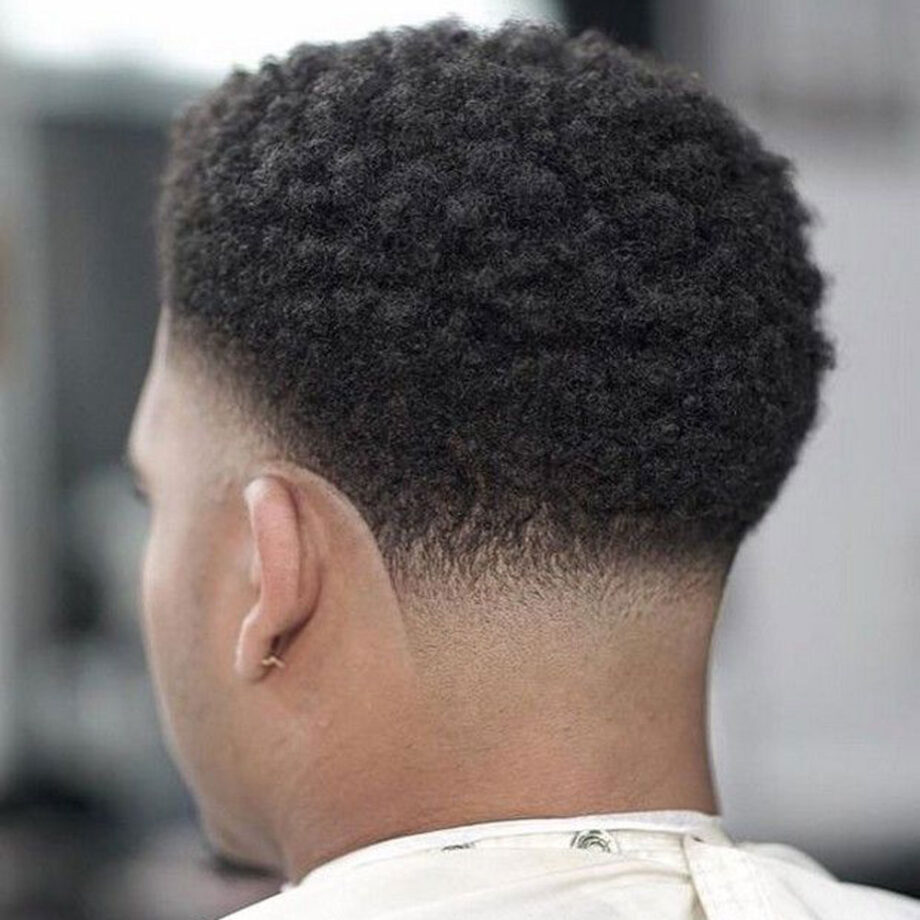 For black men sporting an afro, you can still get in on the taper fade action with an afro taper fade. As with other taper fades, the afro taper fade sees some of the weight of your hair being removed from just over the ears and around the back of the neck and give it a tidier appearance overall. Of course, you can choose what level of taper fade you want with your afro, such as a low afro taper fade to remove just a small amount of hair, or you can go higher. We reckon the afro taper fade looks best with a low fade.

Another benefit of removing hair from the sides of the head  is that it will help accentuate your facial structure, and if you’ve got the cheekbones of a runway model, you’re going to want to show them off. 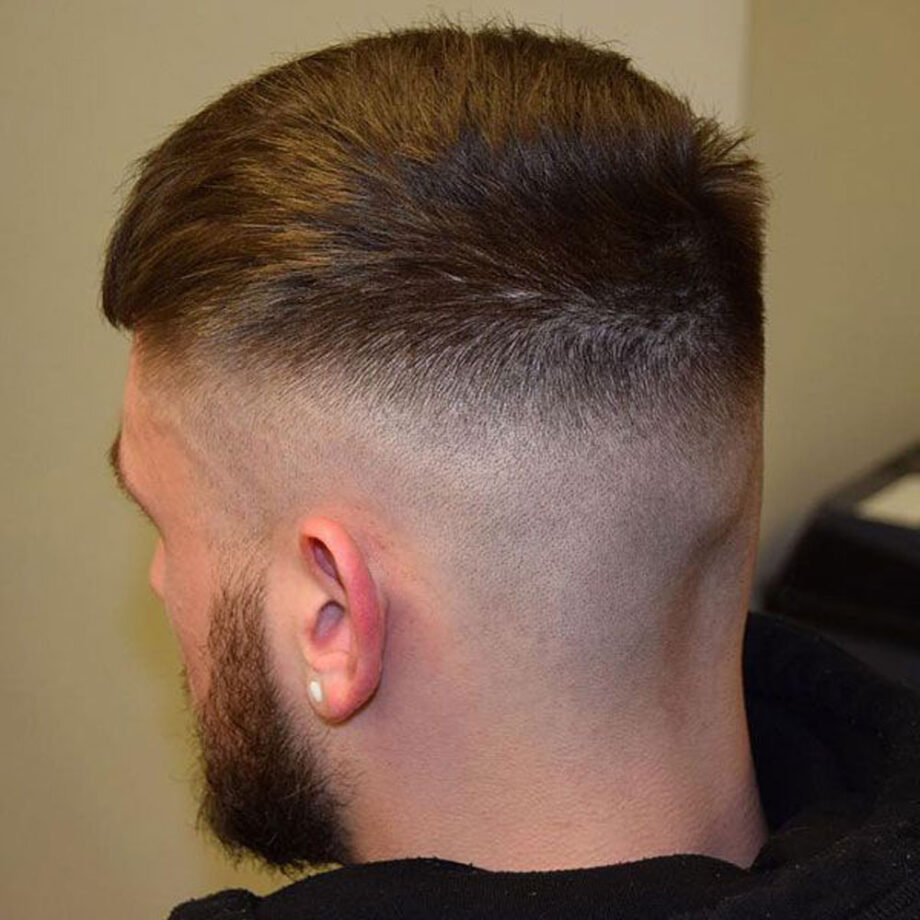 The skin taper fade is similar to the bald fade in that both will expose the skin on the sides of your head, however, it is commonly paired with hairstyles that are longer on top. It could be considered part of the undercut family too, since it sees great contrast between the sides and the top of the head. Since this is a tapered version of the classic skin fade, the hair on the sides will gradually get shorter until skin can be seen, as opposed to a hard, distinct line between hair and skin that you’d get from a skin fade. It can look fantastic with voluminous hairstyles such as pompadours and quiffs, but can ultimately suit a number of classic men’s hairstyles. 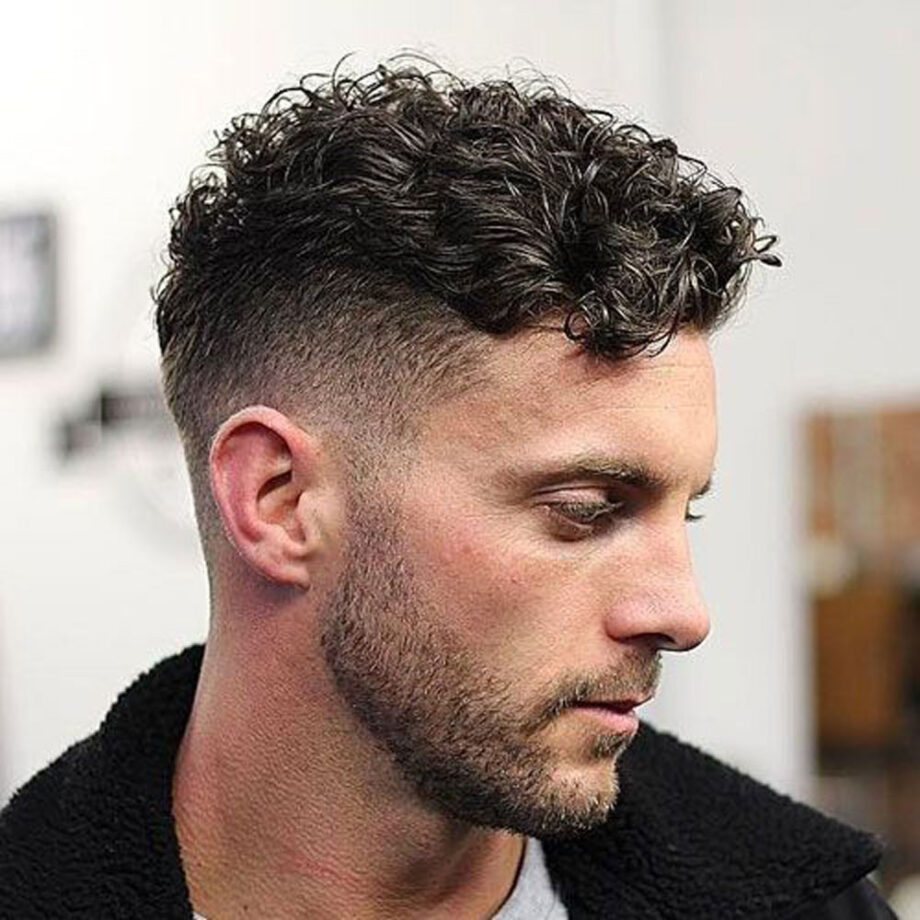 Curly haired men rejoice, the curly hair taper fade is definitely an option for you. In fact, the taper fade is one of the best fade options for men with curly hair as it removes some of the excess weight provided by your curls, but still allow you to keep a solid portion on top of your head. Try a curly taper fade with your hair styled forward, similar to a Caesar haircut or a French crop and you’ll soon wonder how you ever did without a taper fade at all. 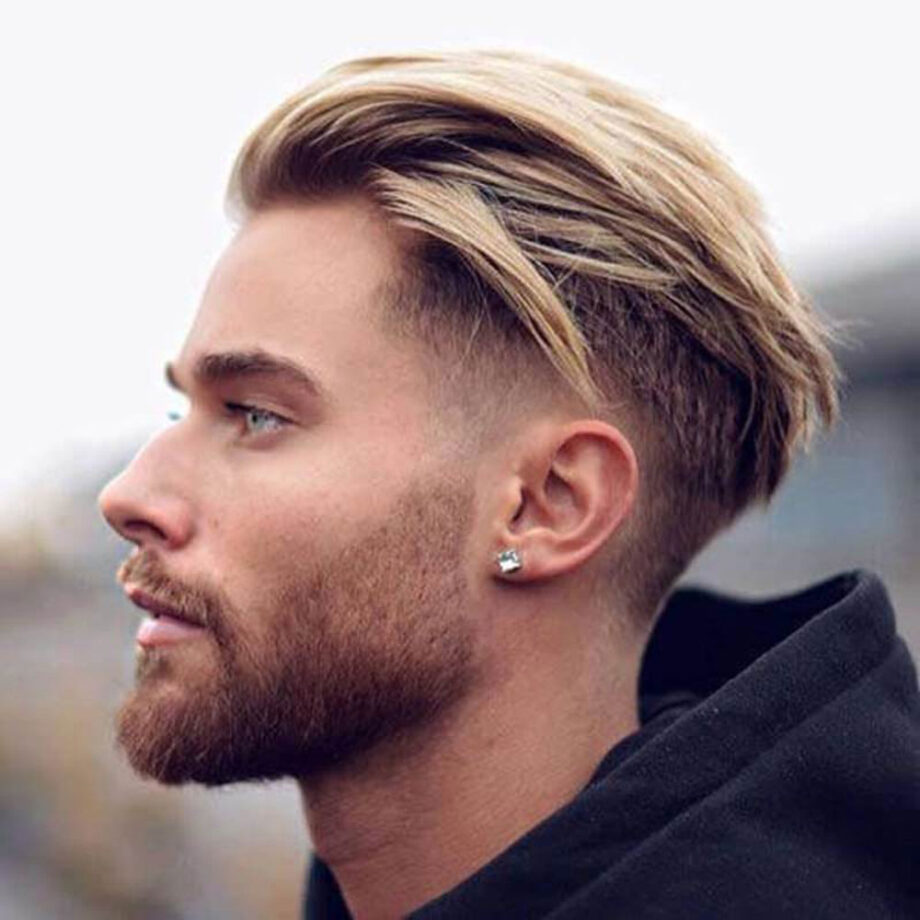 The undercut is already a relatively striking hairstyle for men. Defined as exhibiting extreme contrast between long hair on top of the head with short sides and back, it’s a daring cut for sure, but one that can earn you serious style points if pulled off correctly. The undercut can also be paired with a taper fade to help reduce some of the extremeness of the cut, and is a great option for those who are taking their first steps into undercut territory, but don’t want to go full head on right away.

The undercut taper fade looks superb when the hair on top is slicked back, put into a hard side-part or even just with a regular comb over. To be honest, any style of undercut seen in Peaky Blinders would look pretty damn good with a taper fade. 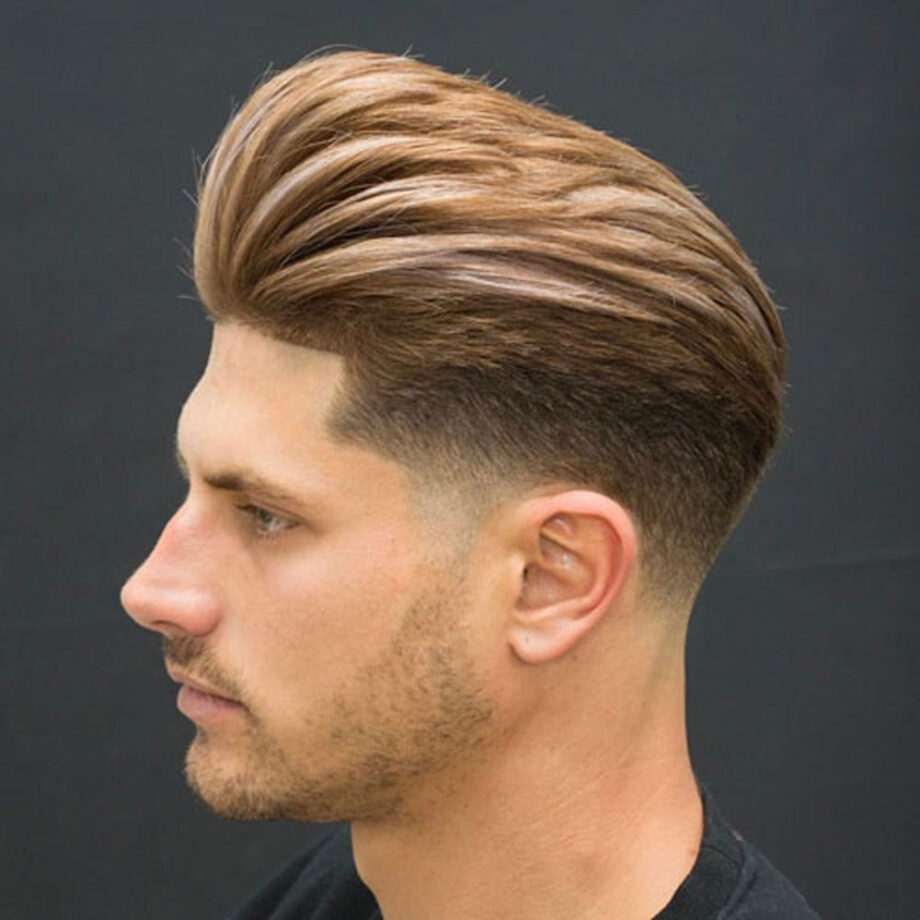 The blowout, a voluminous hairstyle similar to the pompadour, is another that can be updated for the modern day with a taper fade. Traditionally a very retro haircut – think Elvis Presley – that would normally have similar length hair all around the sides and back, even if it’s shorter than the hair on top, the blowout is one for those who want to stand out from the crowd. To brings things in line with more modern hair trends, pairing your blowout with taper fade will help to not only accentuate the length on top, but also adds a slightly more sleek touch to the hairstyle.