Who wore it better has been a red carpet style game since before there were style magazines. Admittedly the competitors are usually female celebrities as they are usually the ones to take risks with their outfits. It’s a bit hard to compare men’s tuxedo’s when realistically they all look the same, some are just tailored better than others. But sometimes there comes an outfit that is so similar that we would be doing you a disservice if we didn’t discuss the similarities.

You may remember last week we blue our minds at Joel Edgerton’s blue suit that he wore to the premiere of The King in New York. Well, it clearly had an impact on his co-star Timothée Chalamet who rocked up to the Australian premiere of the same film in an all-blue number. Now usually we could say this is just a coincidence but Joel & Timothée are both stars in the film and both attended the same premiere so clearly they are sharing style tips. 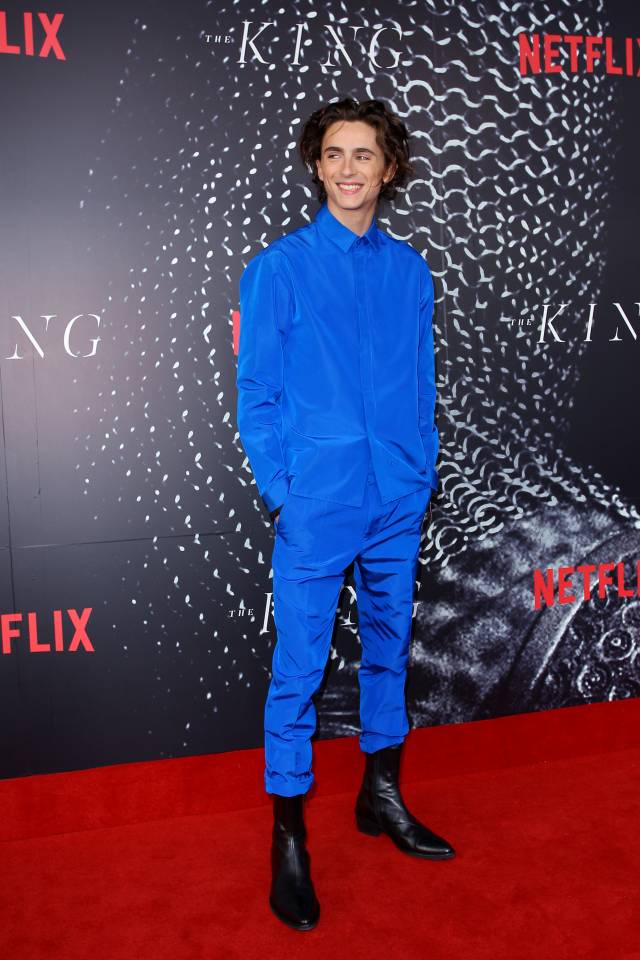 Joel wore his blue outfit as a suit with a blue jacket and matching shirt and pants. Timothée puts an edgier spin on it as it isn’t a full suit but more a shirt and pant combination. His long bright blue shirt is buttoned to the top and untucked from his matching pants. The bright blue is quite confronting but somehow it works for the actor when it probably wouldn’t on any normal person. Timothée also gives himself some height with heeled black boots that he has shown off by rolling up the pants into messy cuffs which does give it a relaxed look that compliments his grown-out wild hairstyle.

The outfit is the product of Haider Ackerman and is part of his 2020 collection. It is not the first time Timothée has worn an outfit from the designer after he opted for a silver suit at the Venice premiere of The King. Like his blue outfit, this suit was all one colour and featured a collarless shell beneath with a double-banded belt. Naturally his fans and the internet went wild over it and Timothée must have been hoping for the same reaction with this blue number. It begs the question though, did he already pick out this blue outfit and Joel beat him to it, or was it the over way around?

The actor has quickly become one to watch on the red carpet, who could forget his glitter harness at the Golden Globes earlier this year? Even on his current promotional tour he was spotted in a Louis Vuitton sequined glitter hoodie in London and in South Korea he was in splattered overalls and chunky boots. It certainly makes him interesting to watch and we are now expecting male celebrities to step their game up. Can’t let the millennial actors have all the fun after all.

The Oscar-nominated actor still has plenty more red carpets to strut his style on with Little Women completed and hitting cinemas in December and his role in the remake of Dune is currently in post-production and slated for release next year. We will start up a betting pool for what colour he will wear next. Our guess is on something outlandish.