Travis Scott might be the biggest rapper in the world right now.

Scott (real name: Jacques Webster) has celebrated his bumper year with a double flex worthy of the gods: a highly customised Lamborghini Urus and a pair of archival Supreme x Nike sneakers.

Let’s start with the sneakers: they’re Supreme x Nike SB Blazers from 2006 that feature a quilted texture, snakeskin-effect Nike ‘swoosh’ and a golden swing tag adorning the heel. Anything Supreme attracts hype and an appropriately high price tag, and these 14-year-old creps are no exception: some sizes are fetching over A$2,000 on StockX (an upwards trend that’s only likely to continue thanks to Scott’s co-sign).

It’s all about collaborations with Scott, and the Lamborghini is no different: first modified by Mansory in Germany, Scott’s also taken his A$400,000 Italian SUV to famous Californian garage West Coast Customs, who have spruced up the car in Scott’s favourite colour: mocha brown. It’s a colour scheme that Scott’s painted many of his cars in, including his Range Rover, Mercedes-Maybach G650 and Lamborghini Aventador.

The white rims and black carbon fibre that contrast with the brown bring to mind Scott’s collaborative Nike Air Jordan 1s, which also demand A$2,000+ resale prices. ‘La Flame’ shared a close-up of the wheels, which also feature ‘Cactus Jack’ centre caps and brake calipers (Cactus Jack being one of Scott’s many nicknames as well as the name of his record label). 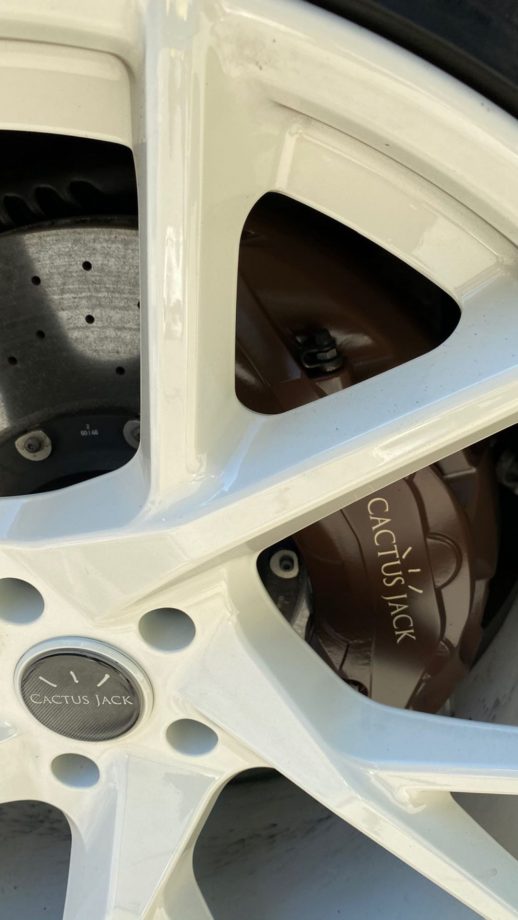 Mansory is known for their outlandish modifications and love of carbon fibre (as well as stratospheric price tags). The ‘Venatus Evo‘ customisation package Scott has optioned costs an additional €556,800 (~A$928,000 or US$655,000) on top of the Urus’ already eye-watering sticker price.

Scott is working on his upcoming fourth studio album Utopia, which is due for a 2021 release. He’s already released two singles from the project: Highest in the Room, which came out last year, and Franchise (featuring Young Thug and M.I.A.) which came out just last month.