Whether it’s dressing Bond, a monarch, or David Beckham, British clothing brands have done more than their fair share of introducing understated masculine style to a global audience. Britain is arguably the birthplace of menswear and the traditions of the past are still heavily ingrained in its menswear scene today.

While you might think the Brits are all about raincoats, stuffy clubrooms, and posh names that remind you of the guys who bullied you at rugby training, there’s much more to see than just the polished suits of Saville Row.

Whilst British suiting brands pride themselves on being meticulously crafted in only the United Kingdom, British menswear labels are a bit more relaxed when it comes to their clothing’s country of origin. That’s not to say that they’ve off-shored all manufacturing to Asia. Swimwear brands like Orlebar Brown still make their clothing in Portugal and England. Their materials meanwhile are sourced from Italy, France, and Portugal.

For high-end British clothing brands like Belstaff who pride themselves on being British, their entire collection oddly isn’t made there anymore — most of their products today are Italian made. For brands like Barbour, if there’s no country of origin on the label indicating ‘made the U.K’ then you can assume their products were made in European regions like Turkey, Portugal, and Bulgaria. Their biker jackets are still made in the U.K by third parties though.

Even clothing brands that are quintessentially British, like Burberry, have multiple countries of product origin. The iconic label has factories in China, Polan, Romania, India, Spain, Italy, England, and the U.S.

Where To Buy British Clothing Brands From

We don’t live in the stone ages anymore so you’ll be pleased to hear that many British clothing brands have online stores these days. If they don’t provide worldwide shipping you’re likely to find them through local distributors, albeit at slightly higher prices. Beyond that, your best bet is to hit up online stores like ASOS, MR. PORTER, SSENSE, End Clothing, YOOX, and Everlane.

If you hear London calling, then take a look at the best British clothing brands that you should definitely add to your wardrobe. 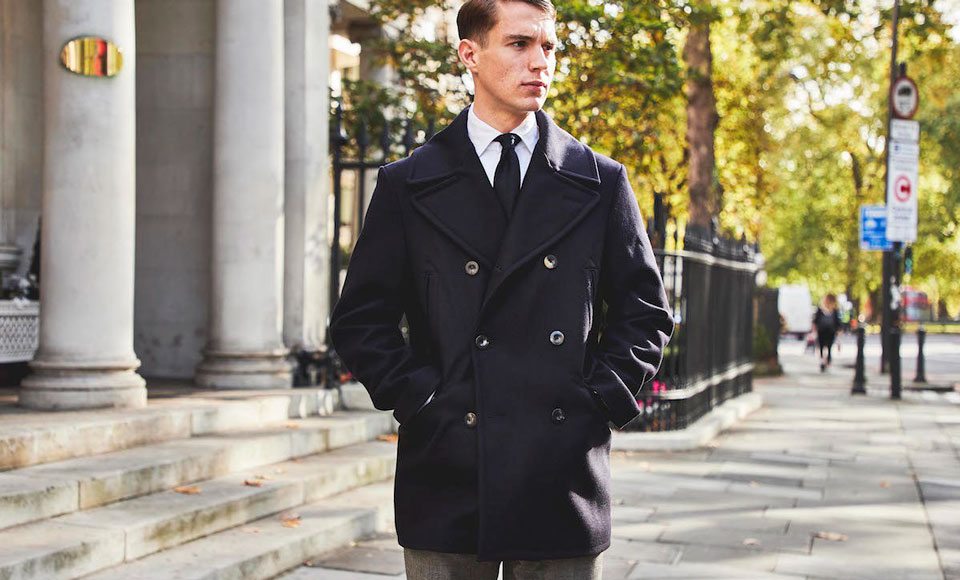 Private White VC is named after a guy whose story will probably make you feel rather inadequate. Fortunately, their clothes are designed to have the opposite effect. They offer a range of hard-wearing, functional casual wear but it’s their jackets – bombers, motorcycle jackets, and raincoats – that hold our attention.

Their production standards are hard to beat – each garment passes through 21 pairs of hands during the process and it’s all done from a factory in Manchester. You can probably tell by now that Private White VC is all about continuity, and with the original White’s grandkids still running the show, we’re pretty sure that’s the way this British clothing brand will stay. 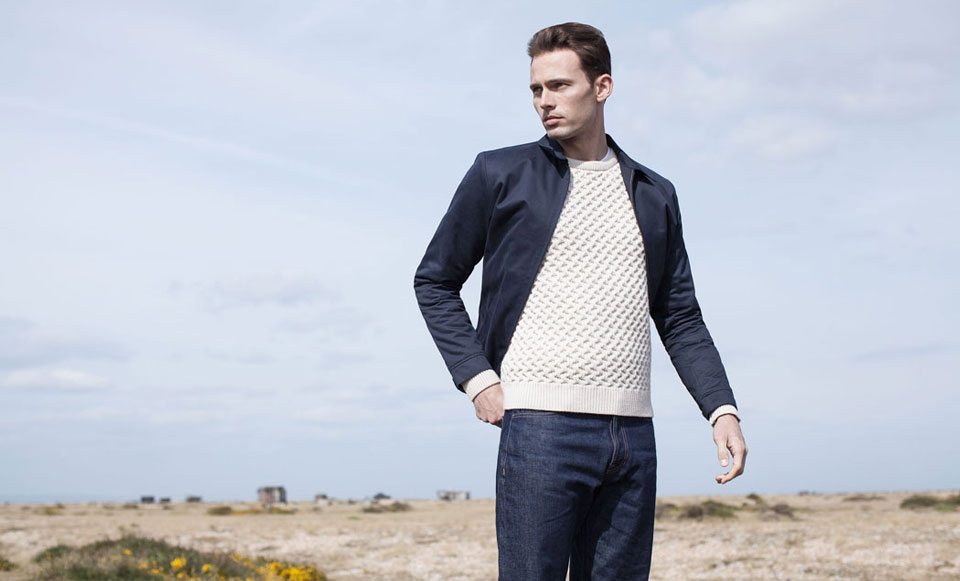 Sunspel makes its home in premium basics, an area of the market that’s often easy to overlook.

This was one of the first British clothing brands to make premium underwear in Britain in 1860 and spearheaded the introduction of boxer shorts in the 1940s. They’ve since broadened their horizons in a big way, with everything from merino knitwear to swim shorts to tees.

Sunspel tends to stick to a neutral colour palette, making their basics versatile enough to slot in and out of every outfit. 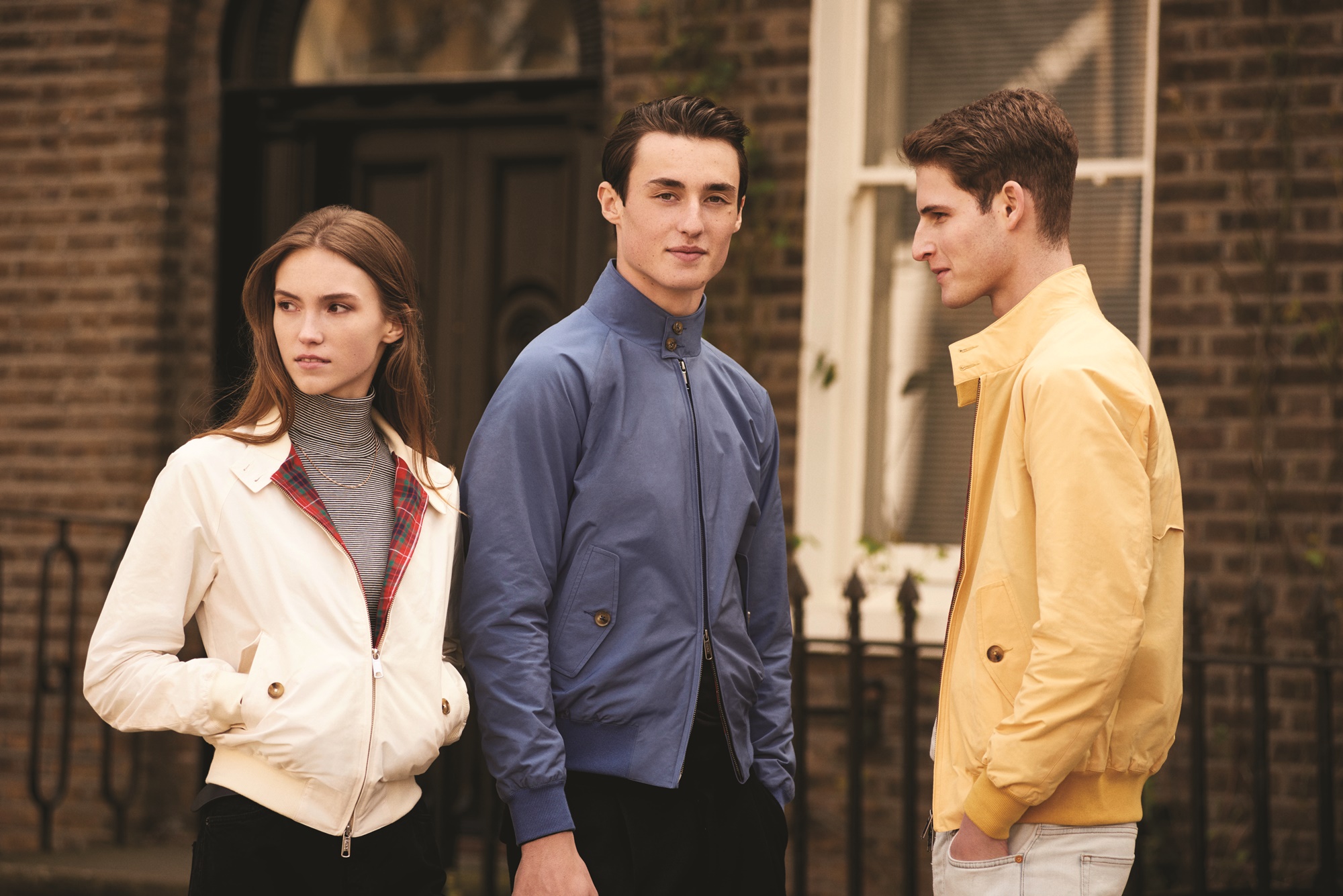 Haven’t heard of Baracuta? Well, you’ll most definitely have seen one of their jackets. Quite possibly one of the most iconic designs of all time, the Baracuta G9 has been a favourite of well-dressed men for decades. It has been the jacket of choice for personalities like Steve McQueen, Elvis, Jason Statham, Daniel Craig, Damian Lewis and Bradley Cooper. 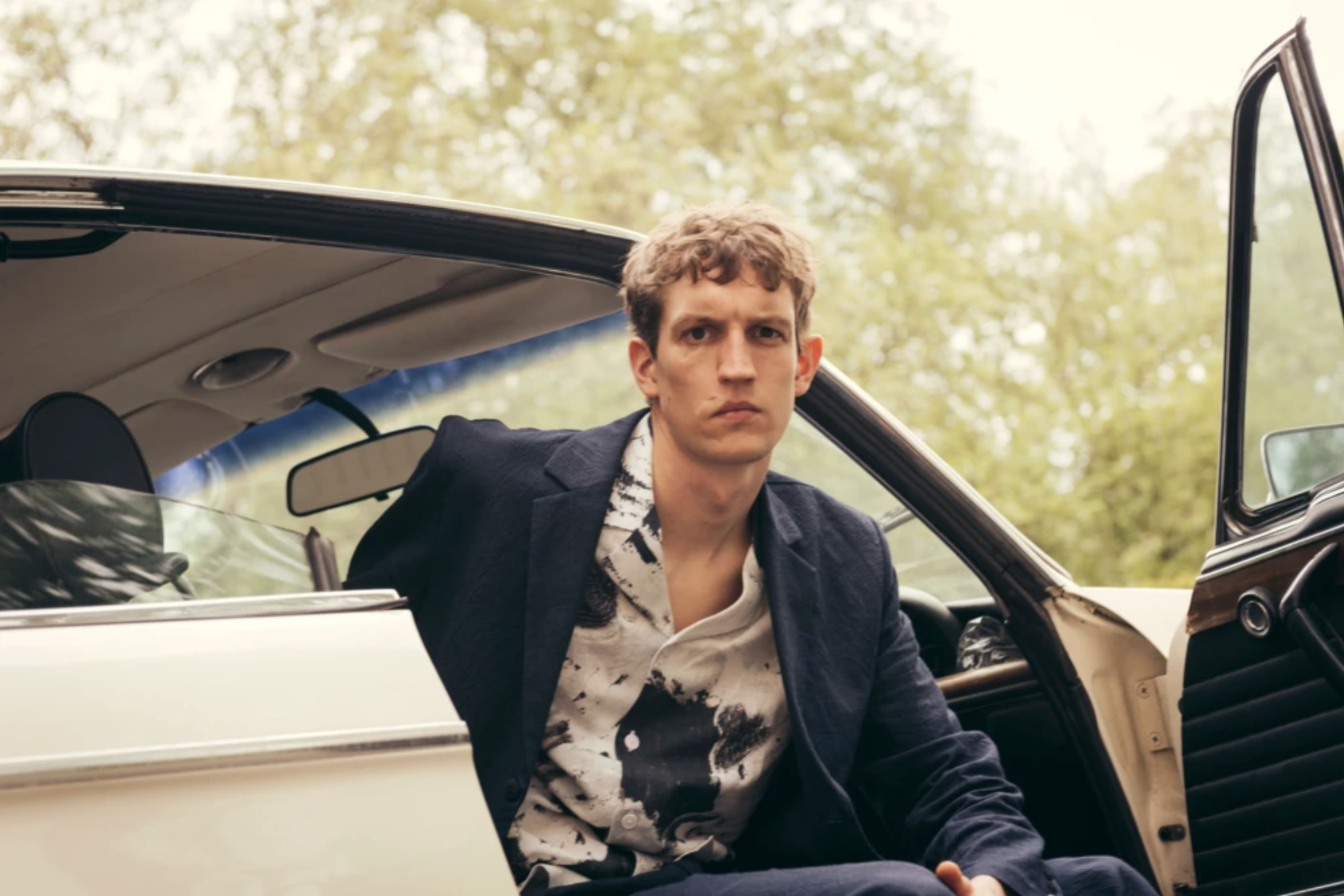 Folk describe themselves as ‘quietly elegant clothing enriched by subtle details: style without drama’. This obsession with the finer details is what makes their garments stand out from the crowd. Made from a range of high-quality fabrics and materials, their simple designs will last forever and look great; hence the inclusion on our best British clothing brands list. 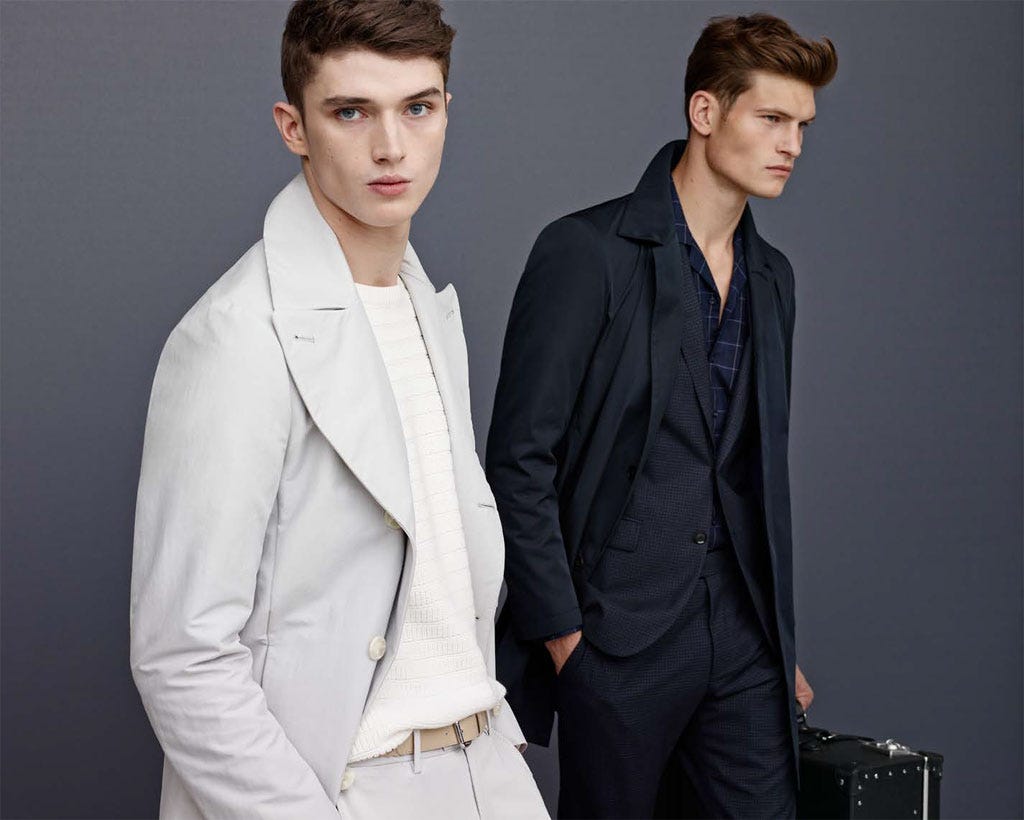 Launched in 1971, Reiss has captured a loyal following of guys who always need that next shirt, tie, or knit. Reiss offers men both casual and formalwear, with modern tailored two-piece suits and a grasp of British style that’s geared towards the younger and more sartorially progressive gent.

Reiss’ white shirts are a staple and you can’t go wrong with any of this British clothing brand’s navy suits for a job interview or fraught in-laws dinner. 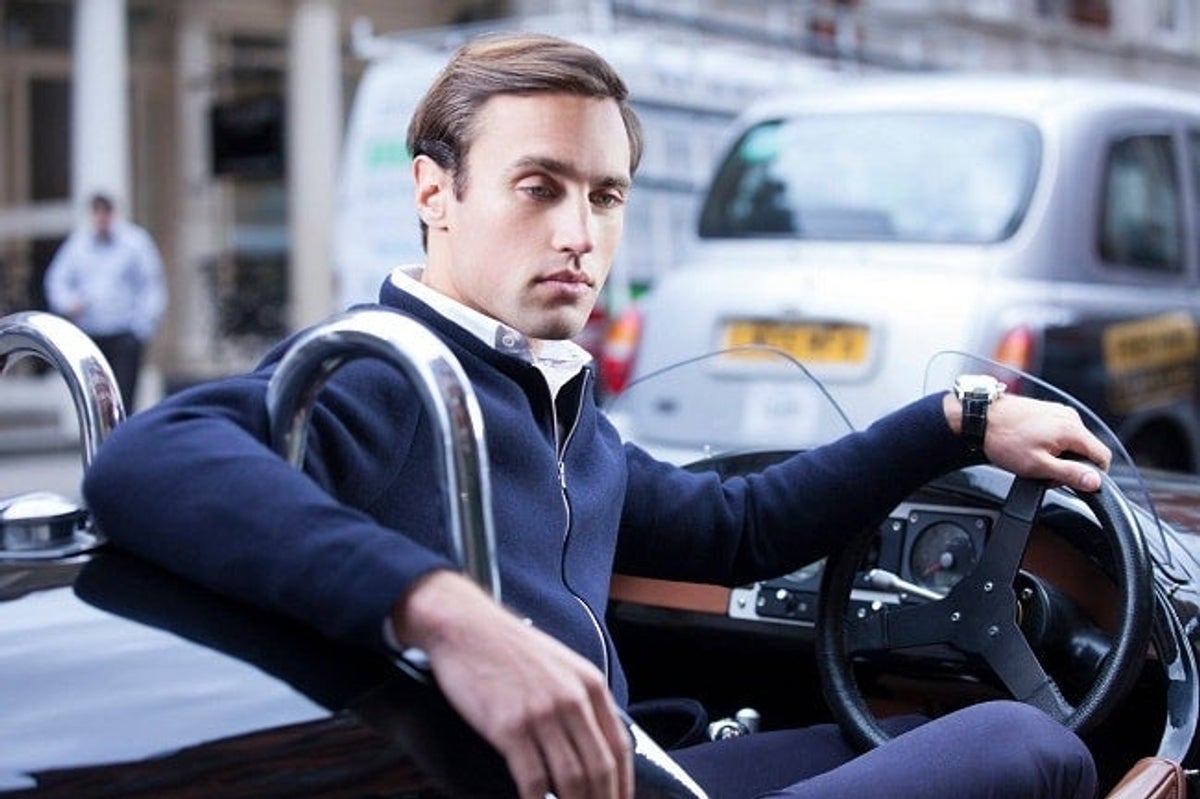 N Peal creates some of the finest cashmere clothing known to man. The British clothing brand’s cashmere is sourced from a selection of special Mongolian goats and each step of production is meticulously overlooked to ensure only the highest quality.

N Peal has been the choice of cardigans and jumpers for James Bond as well as several other heavy-hitting celebrities like Arnold Schwarzenegger, Marilyn Monroe, and the Princess of Monaco. 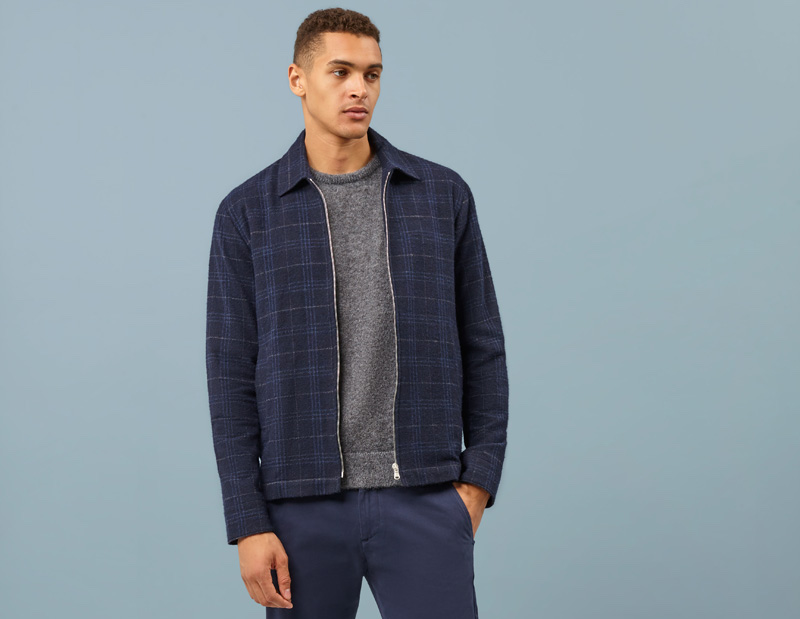 Wax London was formed by a group of friends who wanted to bring the tradition of making garments in the UK…back to the UK.

Their designs marry quintessential British looks with hints of Scandinavian influence to create ultra-functional, minimalistic clothing for everyone. Made in the UK, with a strong emphasis on production quality, this British clothing brand’s garments will last a lifetime. 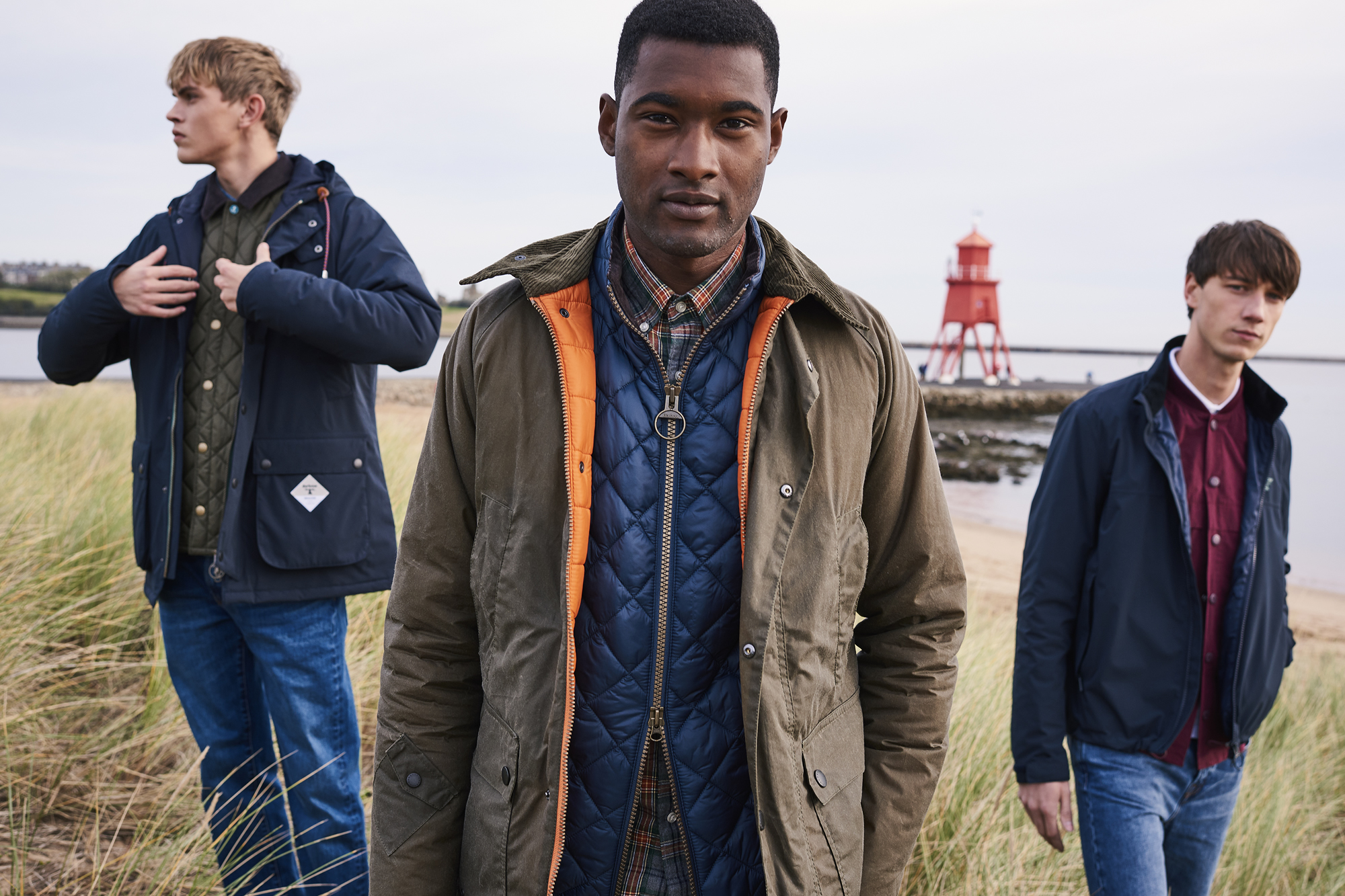 It should be no surprise that British menswear comes with a history that’s hard to match. Founded in 1894, Barbour is no exception.

Their reputation rests on the laurels of their enduringly popular waxed cotton jackets which are as relevant now as they were in decades past. Barbour isn’t just a one-trick pony though; you’ll be able to find gilets, motorcycle jackets, and casual polos and trousers in recent collections.

Plus, Barbour offers a garment repair service, working on over 100,000 jackets annually. So if you buy a jacket in now, there’s every chance you’ll still be wearing it in a decade or more. 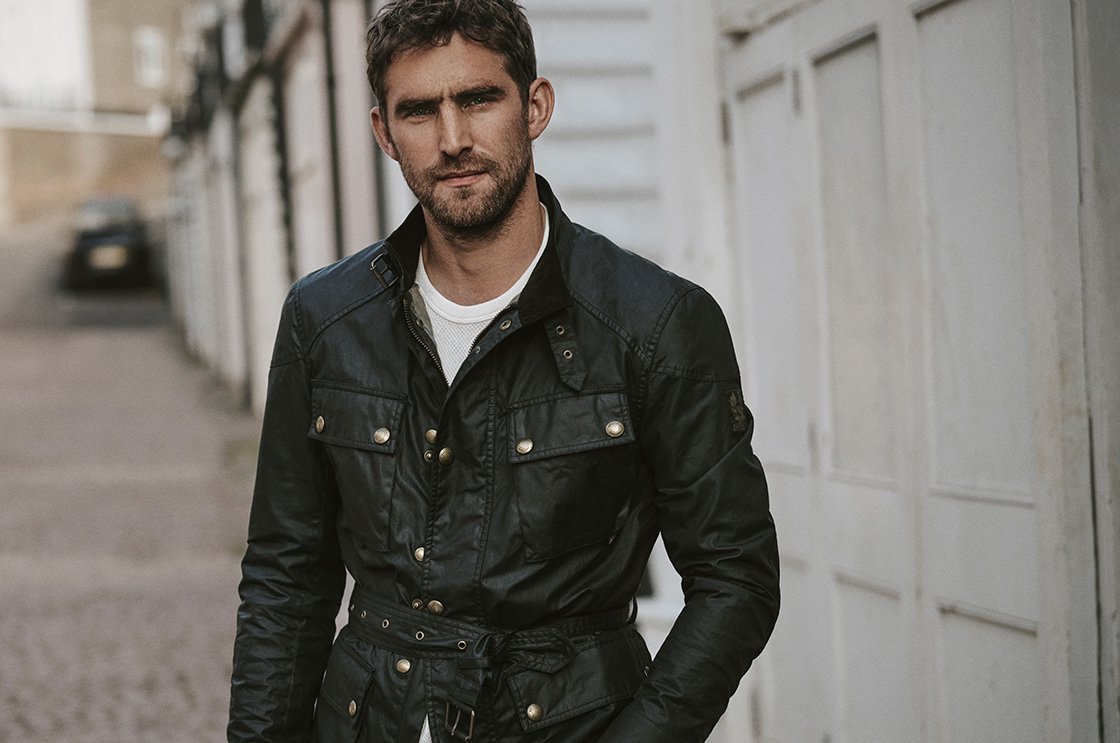 At the heart of Belstaff is adventure. Their garments are designed to travel with you wherever you go and to help you look your finest along the way.

Originally famous for their innovative use of waxed, waterproof cotton, Belstaff has come a long way since and has a range of clothing and accessories that are luxurious yet rugged. 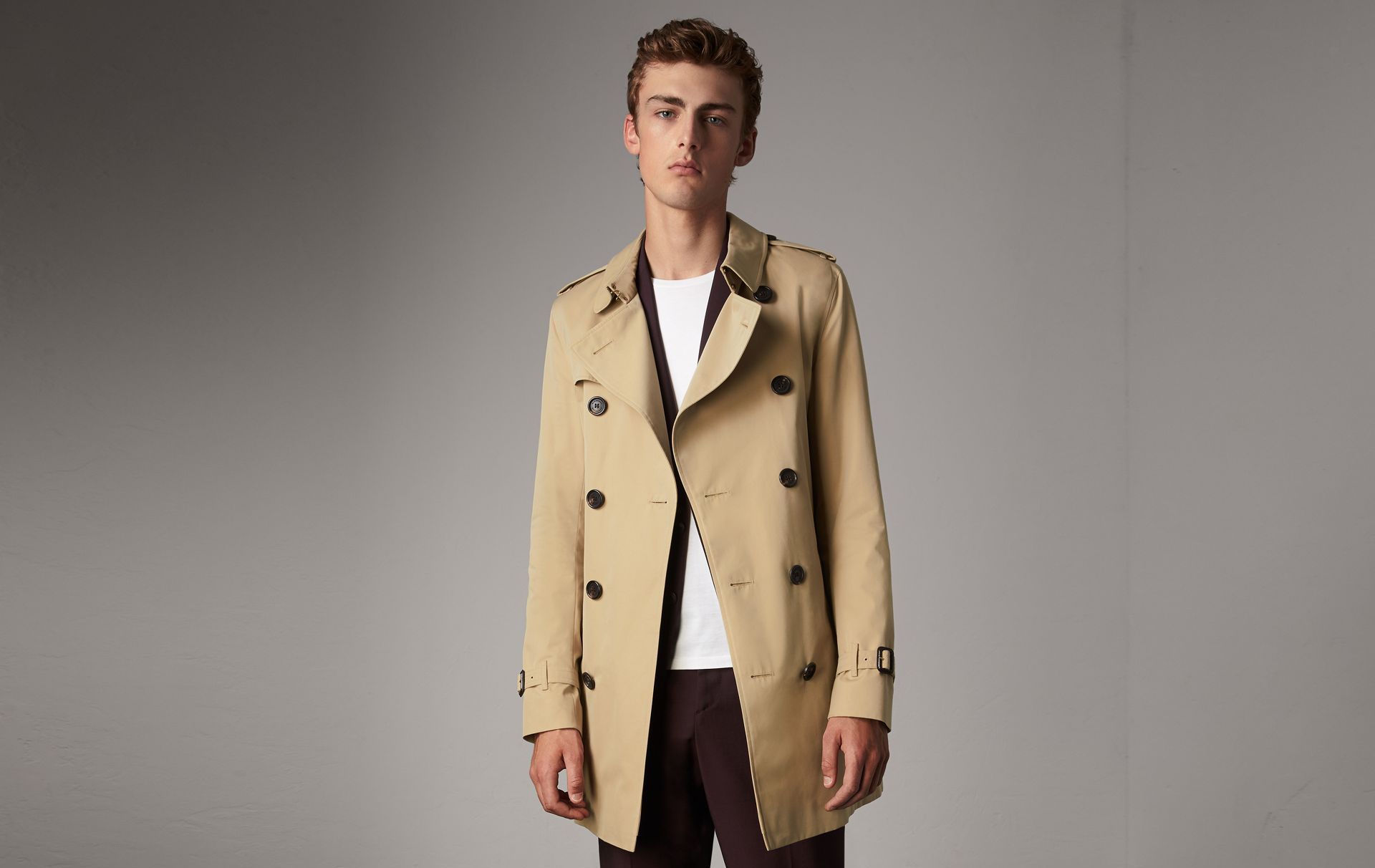 Everyone wants a Burberry coat – period. Burberry has some serious historical mileage behind them, from outfitting British officers in WWI to their presence today as runway stalwarts.

The trench coat is a small, but distinctive part of their offering and you’ll be able to find luxury fragrances, scarves, and bags in the British clothing brand’s range. If we had a choice, we’d see you walk out the door with one of their camel trenches.

They never, ever go out of style, and the countless imitations on the market don’t do them justice. If there’s any piece of clothing to invest in, it’s this. 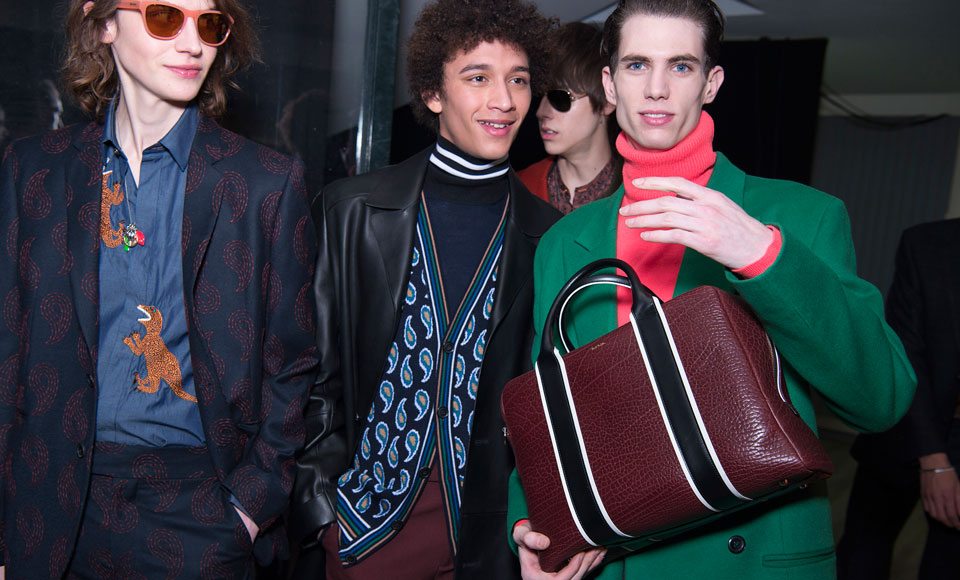 ‘The quirky Brit tailor that likes funny patterns’ doesn’t quite do Paul Smith justice. A menswear heavyweight, Paul Smith redesigns classic British tailoring with a bold eye for colour and prints, without cutting any corners during the design process.

He’s an advocate for wool and tailoring heritage but doesn’t let that get in the way of a cheeky print or jab at Saville Row’s stuffy pretensions. Nowadays, Paul Smith is exploring subdued, light outwear in contrast to his characteristic boldness: floral printed knits and espadrilles, tailored swimwear, and a whole lot of orange, everywhere.

Have a look at his wool bombers and don’t feel afraid to slot a Paul Smith floral tie into your rotation. 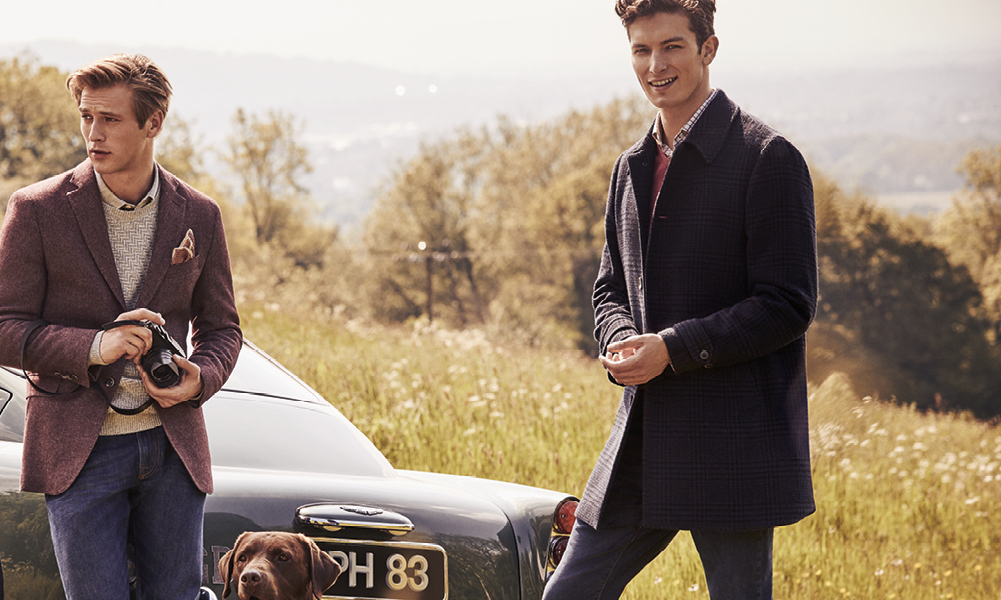 Founded in 1979 and operated to this day by the dashing Jeremy Hackett, Hackett offers classic ready-to-wear tailoring with the maturity you’d only expect from the elders of the Saville Row establishment.

His emphasis is on the classic workhorses of a masculine wardrobe, allowing you to build a full complement of suits, shirts and ties for the corporate nine-to-five. Their latest spring collection includes lighter knits, gilets, and casual jackets, but you won’t see novelty prints or clever pop-culture nods anywhere here.

Hackett is for the guy that wants British understatement without the musty sartorial cobwebs you tend to associate with Saville Row. They’re great for a mature, but contemporary wardrobe. 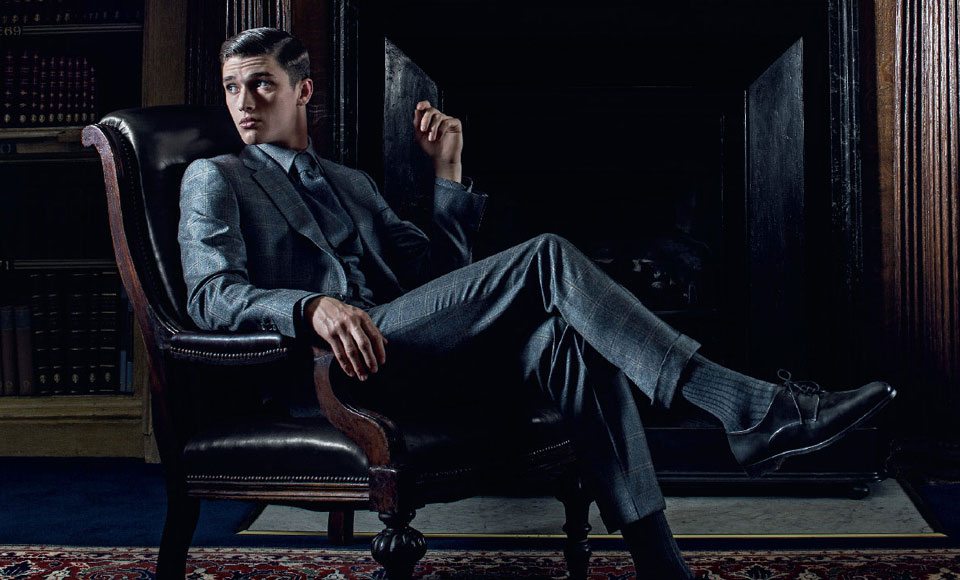 Gieves & Hawkes have an impeccable CV that spans some two hundred years and a client list to match. This British clothing brand originated in London in 1771 as military and establishment tailors and earned not one but three Royal Warrants (not an easy thing) in the process.

While they might outfit former heads of state and celebrated sportsmen like David Beckham, mere plebs like us can still access a strong made to measure and bespoke program that’ll have you leaving their plush London headquarters feeling like you should be a leading face in the next 007 flick. 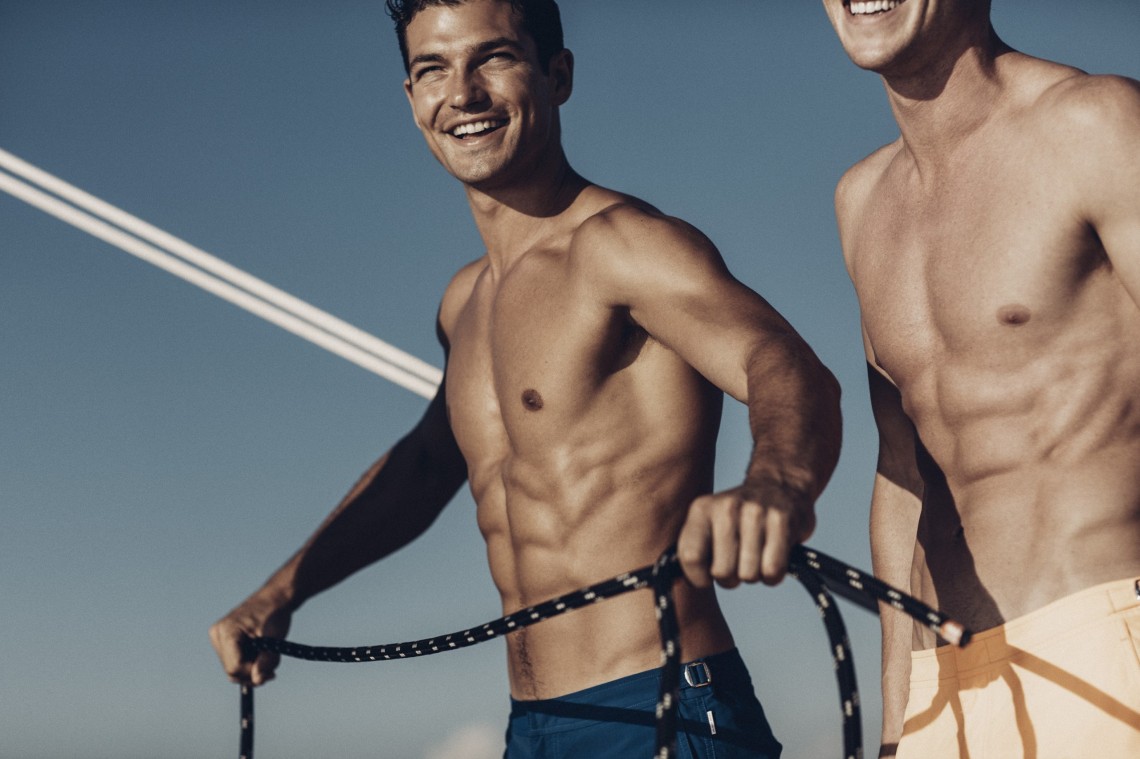 Most guys don’t put ‘luxury’ and ‘bathers’ in the same basket, so thankfully we have Orlebar Brown to make it a thing.

Orlebar Brown answered the cries of men who were fed up with long, fratboy boardies, replacing them with smart, tailored shorts that you could probably wear out on the town. They encompass both plain, versatile patterns and novelty prints, and are as carefully made as other serious tailoring brands.

If you want to make getting sunburnt by the pool a luxury experience, a pair of Orlebar Brown boardies is a stylish step in the right direction.