With a bar and fully-reclining seat, it’s hard to go wrong in business. But if you’re spending a small fortune to be cradled over the clouds, you really ought to pick the best crib.

After a disappointing experience on a wrinkled old 747 we did some recumbent research—wetting our lips on only the finest champagnes and resting our weary limbs on only the comfiest of beds—so you didn’t have to. 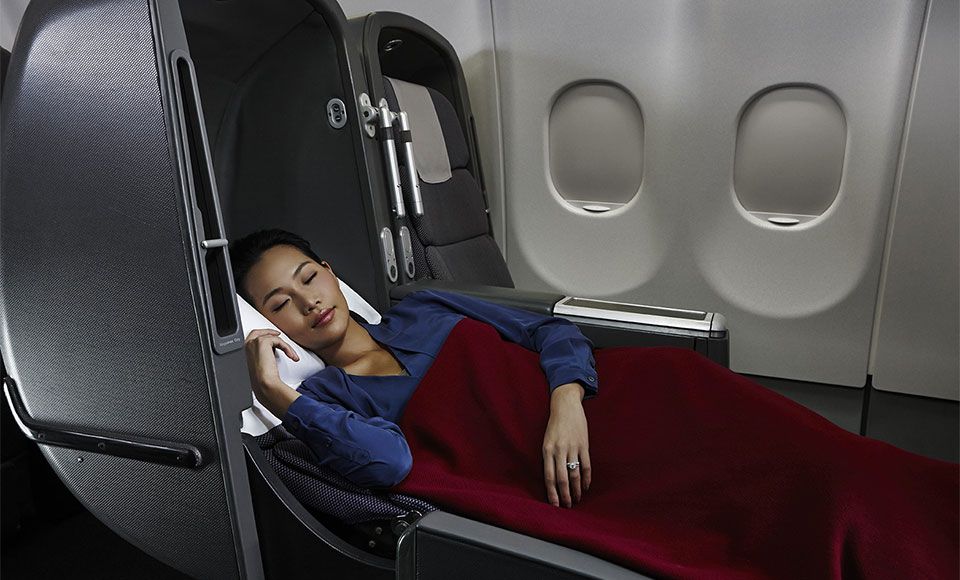 Seats: The second generation SkyBed cocoon seats are comfortable, and offer massages (and of course, you get the trademark Qantas PJ’s). No-where to store your laptop close by though. Business Suite on the 787 is what we’re waiting for, however the rollout has taken so long the seats will be dated by the time it’s across the fleet. (pssst… Just hope you don’t get stuck on a 747 with the now incredibly old First Class seats.)

Food: Trays set with white linen, where roast beetroot salad and a chicken, leek and chestnut pot pie will appear with a smile. Lighter options include chicken schnitzel and Swiss cheese toasted sandwiches, while for dessert there’s a seasonal cheese selection and ice cream with almond praline.

Lounge: Clever sectioning offers various spaces for relaxing, working or enjoying a meal pre-flight. Showers are available, as is a family zone—for when the kids need to be entertained. QANTAS First lounge in Sydney is what makes the trip special as well as First check-in. Yes, it’s true QANTAS destroy the competition when it comes to lounges, however you only spend 1 hour on the ground and 14 in the air.

Aircraft: From Sydney there are two options—the Airbus A380, and Boeing 747—both of which are non-stop flights of about 14 hours. The Airbus comes in a 2-2-2 seat configuration (which means people in a window seat don’t have direct aisle access), while the Boeing features a 2-3-2 configuration, meaning that on full flights everyone—window seat or not—will either be climbing, or climbed over, to stretch their legs. It’s worth noting that if you fly from Melbourne you can get a QF95, a modern Dreamliner with a superior 1-2-1 seat configuration.

Our Two Cents: After some recent lacklustre flights on antique 747’s, we can’t wait to see the Qantas fleet move to 787’s. Considering what the airline charges for business class, it should be a LOT better in the air. If you fly via Melbourne, then you’ll be sweet as a nut on the 787 with the business suite. For now… we wait patiently for their 747’s to be sent to Saudi Arabia. 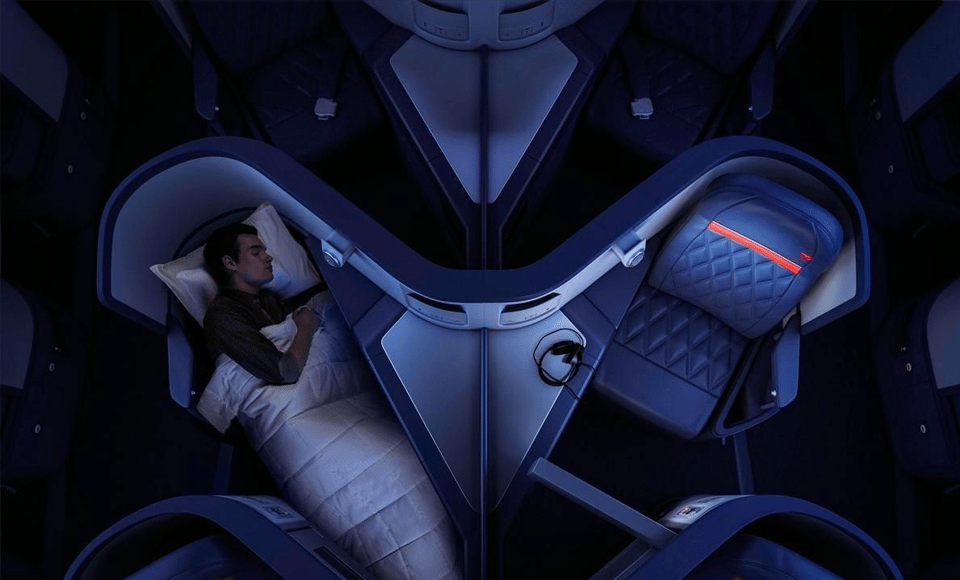 Seats: We’re looking forward to the launch of Delta’s Airbus A350 later this year, a game changer that will offer superior privacy in the form of individual business suites. Until then they will be continuing with (what some would call) phallic-shaped seats, in the trusty old 1-2-1 ‘herringbone’ configuration.

Food: Seasonal, fresh produce, cocktails, beer, wine—the works. There is also a ‘Dine and Rest’ option, enabling you to have your meal delivered as a single service rather than at intervals, which is perfect for red eye flights when you want to get some serious sleep.

Lounge: The Skyteam lounge is a haven from the busy international terminal of Sydney airport. Complimentary wifi and—as you would expect from any business class lounge—excellent food.

Our Two Cents: Impressed with Delta internally within the US of A. Their new business class suites will be a winner and a clear leaders in the sky across the Pacific. Bring it on! 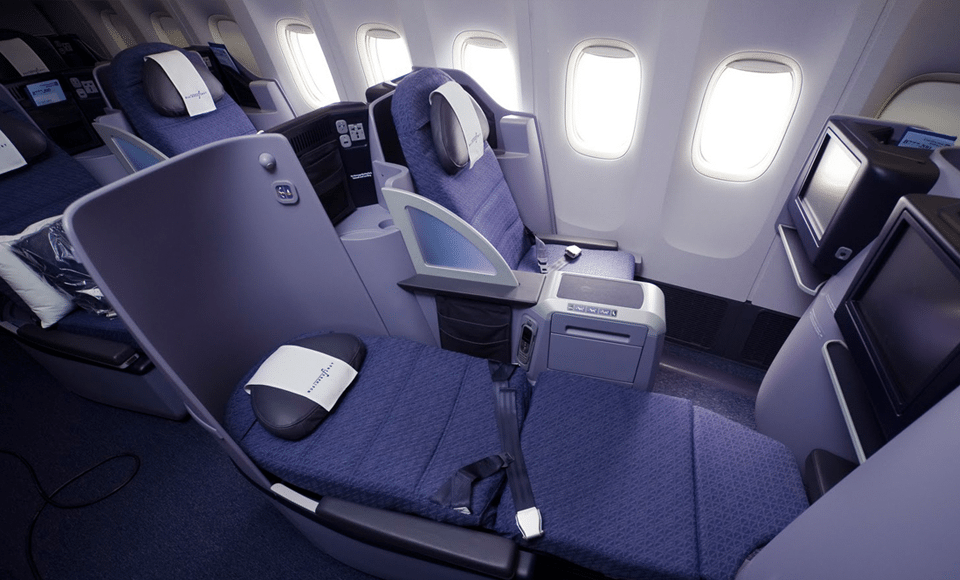 Seats: Eight rows of seats in a 2-2-2 configuration, a setup which forces window-seaters with small bladders to be constantly straddling their travel companions. Each reclines to a 180-degree flat-bed, 52 centimeters wide and 198 centimeters long. Storage is a shelf beneath the TV. Comes with, “Custom bedding from Saks Fifth Avenue with a plush duvet, a lightweight day blanket and a premium pillow,” as reported in Traveller.

Food: There are four mains to choose from (highlights include the pan-fried chicken breast with chestnut-raisin sauce, and hapuka fish fillet with sun-dried tomatoes and cashews), but beware: as Kerry van der Jagt from Traveller found out the chewy-way, “While the fish is sweet and delicious, the accompanying pea risotto is like glue”.

Lounge: United’s business class passengers out of Sydney have a choice between the lounges of Star Alliance partners Air New Zealand and Singapore Airlines. According to Australian Business Traveller, “United steers you to the crowded Air New Zealand lounge where there’s barista-pulled coffee, an ‘egg station’ for poached or fried eggs cooked to order plus the usual scrambled eggs, baked beans and grilled tomatoes”.

Aircraft: From Sydney there’s the Boeing 777 (13.5 hours), while Melbourne has the newer 787-9; a smoother, more comfortable and less jet-lag inducing ride.

Our Two Cents: The United experience is good but for some reason you feel like a hindrance to their flight attendants. They lack the charm of Qantas, Air New Zealand and Virgin Australia. Their seats, (a 2-2-2 configuration) is kinda daggy looking but remarkably comfortable. 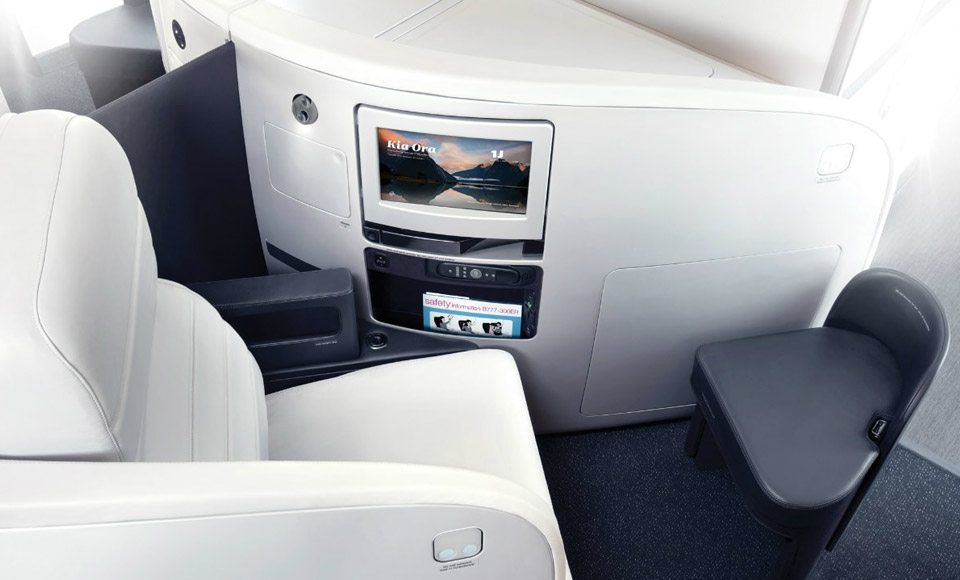 Seats: 55 centimeters wide, furnished with white leather, these seats are basically home-style lounge chairs that recline into 2 meter long beds. The thick memory foam mattresses, fluffy duvets and hotel-size pillows add to the comfort, as does the increasingly popular ‘herringbone’ 1-2-1 layout, which means everyone has direct aisle access.

Lounge: Split into several zones, there’s a cafe area where you can either dine buffet-style or—if you so desire—with a dish prepared by the resident chef.

Flight: The Air NZ Boeing 777-300 flies between Sydney and Los Angeles via Auckland in 17 hours and 45 minutes (including a 2 hour 35 minute stopover in Auckland).  The only downside is the luggage allowance (3 bags of 23kg each), which is lower than some other airlines.

Our Two Cents: Arguably the most innovative and progressive airline. The stop in New Zealand will be a no-go for some. 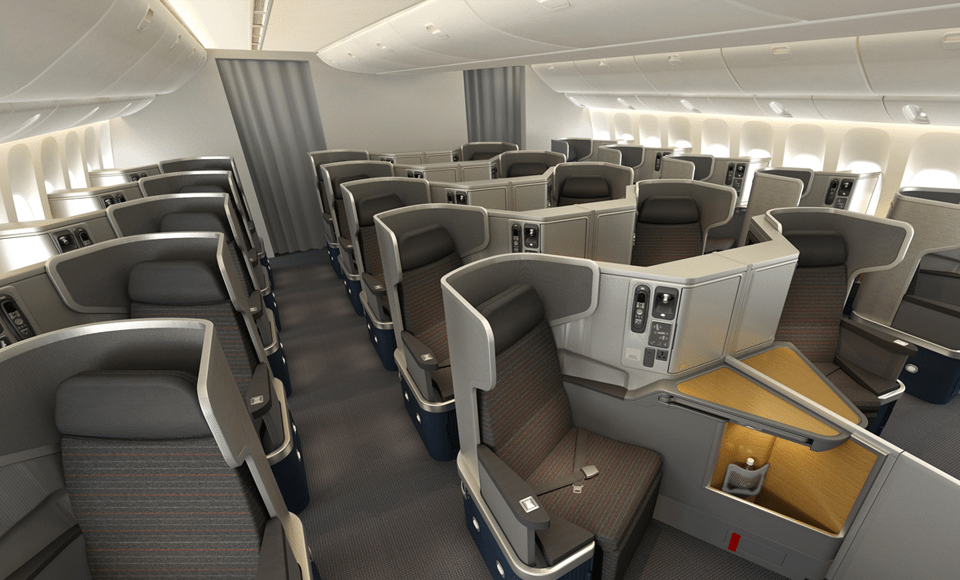 Seats: The bed features a removable armrest, and reclines to 198 centimeters in length, designed in ‘reverse herringbone’ style a la Virgin. Passengers are provided with mattress pads come bedtime.

Food: For dinner the choices include grilled beef filet, chicken tikka masala, lobster ravioli and asiago-stuffed gnocchi. The wine list contains Australian wines from the Barossa and Margaret River regions. Breakfast is a choice between traditional American and continental.

Lounge: Buffet food, complimentary alcohol and more substantial dishes available for purchase. However, according to Australian Business Traveller, it isn’t as good as the newer One-world Business Lounge.

Our Two Cents: AA have come a long way in recent years. They are going hard after the business traveller and with the revamp of their entire fleet they’re definitely a contender. Plus they’re Oneworld which is great for Qantas regulars. 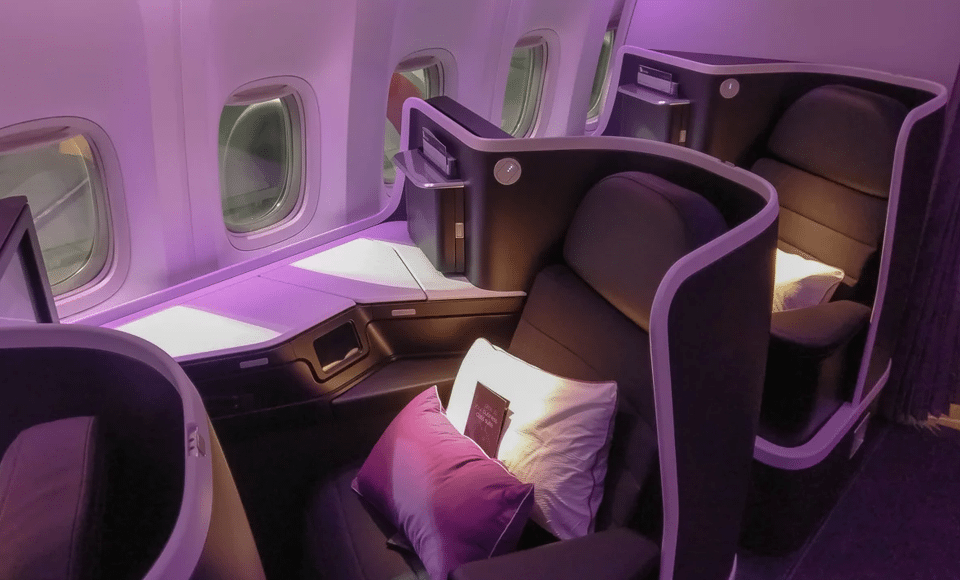 Seats: You wouldn’t expect a seat configuration to be named after an exotic species of fish—but it makes sense when you think about it. Virgin has fitted their 777-300ER fleet with ‘reverse herringbone’ seats (the 1-2-1 configuration ensuring easy aisle access for everyone), 53 centimeters wide (71 when you lower the armrest), lengthly (in fully flat mode it’s 203 centimeters) and spacious around the feet.

Food: A la carte, express dining, a bakery, and a ‘pantry’ are all on offer. Described by Business Insider as, “Hearty Australian fare rather than anything gastronomically exciting.” But we wouldn’t have it any other way.

Lounge: Stylish, classy, and with a great bar. Also includes complimentary WIFI, meeting rooms and access to a suite of the latest news publications and magazines.

Our Two Cents: With great lounges, staff, aircraft and price it’s hard to beat Virgin Australia when you’re traversing the Pacific ocean. Let’s see whether they can keep this up or whether Qantas over take them when their 787 fleet is in service.