Time. It’s a constant which forms the very backbone of motor sports. Without it there’s no competition, no finish line.

It’s little surprise then that luxury watch makers have let some of their most coveted creations be inspired by the world of motorsports. Whether it’s Formula One, Le Mans, Mille Miglia or just weekend cruising, there are no shortage of watches designed for the die-hard motoring enthusiast.

Herein lies eight of the most stylish watches that will make any car lover do a double take. 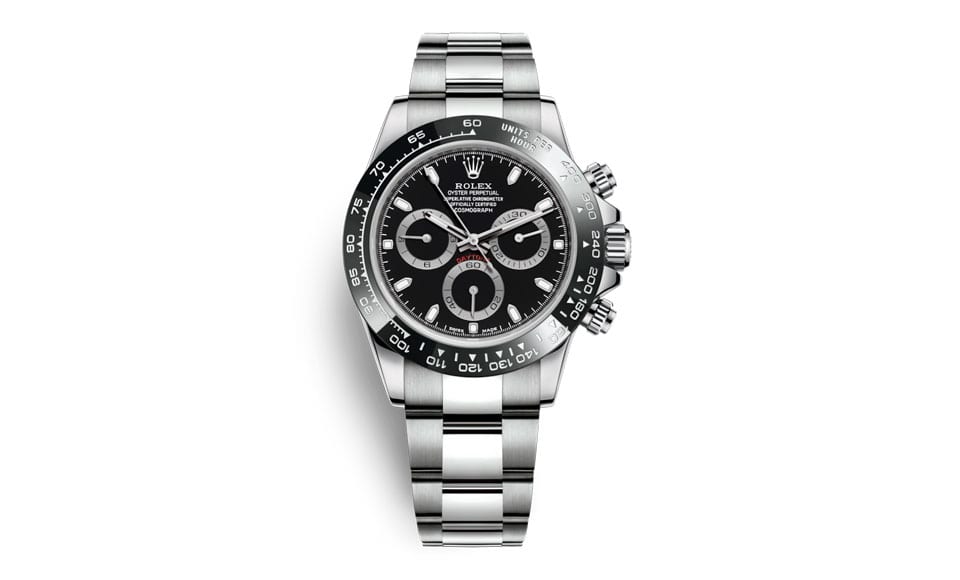 It comes with a three year waiting list but you can rest assured that the Rolex Cosmograph Daytona is worth every dollar it commands. The watch design was first introduced in 1963 as a timing instrument to meet the demands of professional racing drivers. Legendary actor and motoring enthusiast Paul Newman eventually rocked one and from then the watch spawned a dedicated fan base of its own. There are countless variations of the model over its 50 year lifespan so your best bet is to shop around and be patient in order to lock down one of history’s greatest sport chronograph watches. The model shown above is a 40mm stainless steel version. 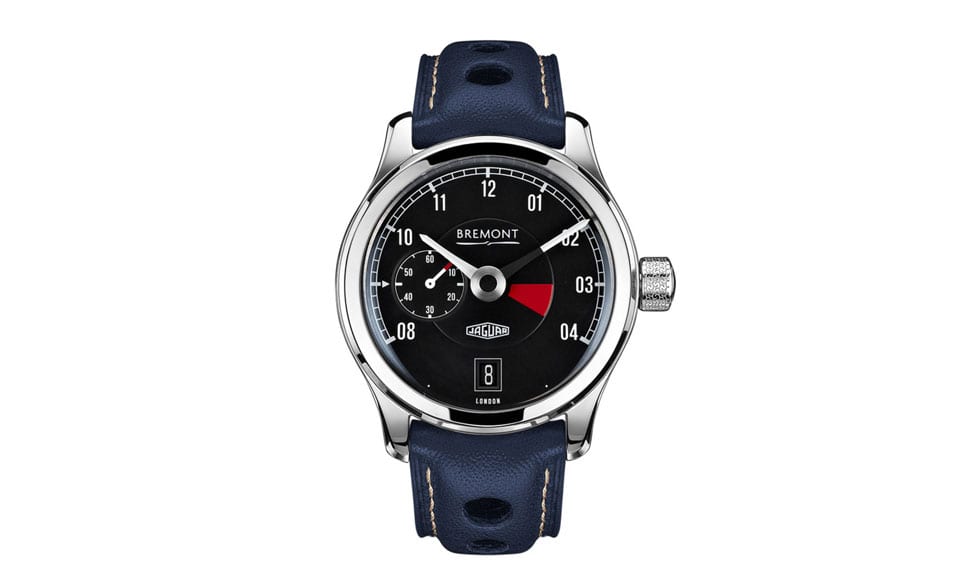 Fine British carmaker, meet fine British watchmaking. The partnership between Bremont and Jaguar is unlike any other thanks their shared roots. Crafted to pay tribute to the legendary Jaguar E-Type – a car which Enzo Ferrari called the fastest production car in the world at its launch in 1961 – are six chronometers marking the resurrection of the six ‘continuation’ E-Type racing cars currently being built by Jaguar. One of the six watches, the MKI model, responds to the call for a more accessible version of the original ‘Lightweight’ limited edition watch by reproducing many of its design features sans the white gold and aluminium case. What we have here is a slimmer variant in polished 43mm stainless steel case backed by a tachometre-inspired dial. 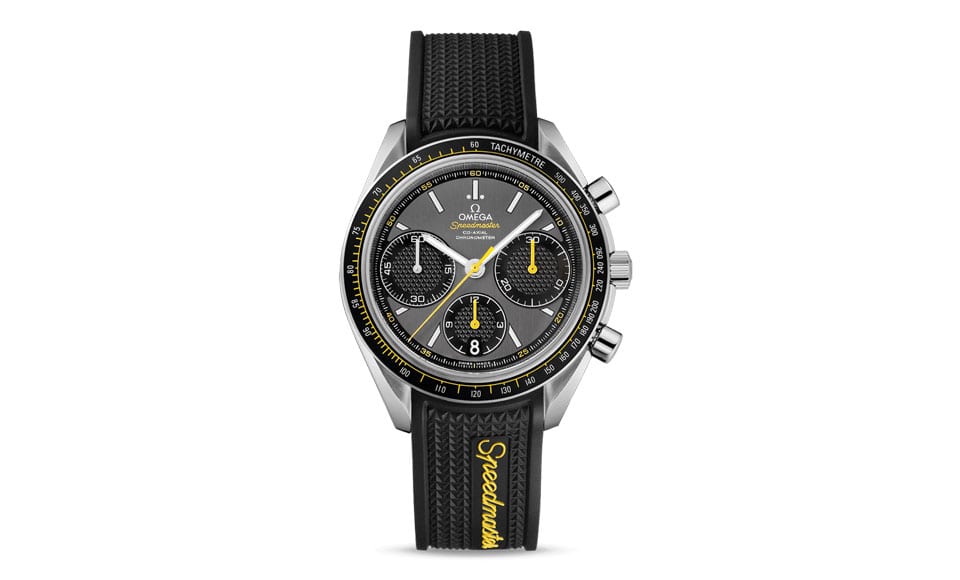 OMEGA‘s Speedmaster is famous for being the first watch on the moon, but that’s not the only place it’s gone. Their watches have also acted as dedicated timekeepers for countless motorsport disciplines which demand precision lap timing. This particular Speedmaster Racing variant is a modern representation of OMEGA’s pioneering spirit underscored by motorsport design elements. The model wears a grey dial with bright yellow accents to mimic the gauges of racing cars whilst the three sub-dials feature a textured “Clous de Paris” pattern. The mechanism sits in a 40mm stainless steel case which is paired to a black rubber strap moulded to a cool tyre tread pattern. 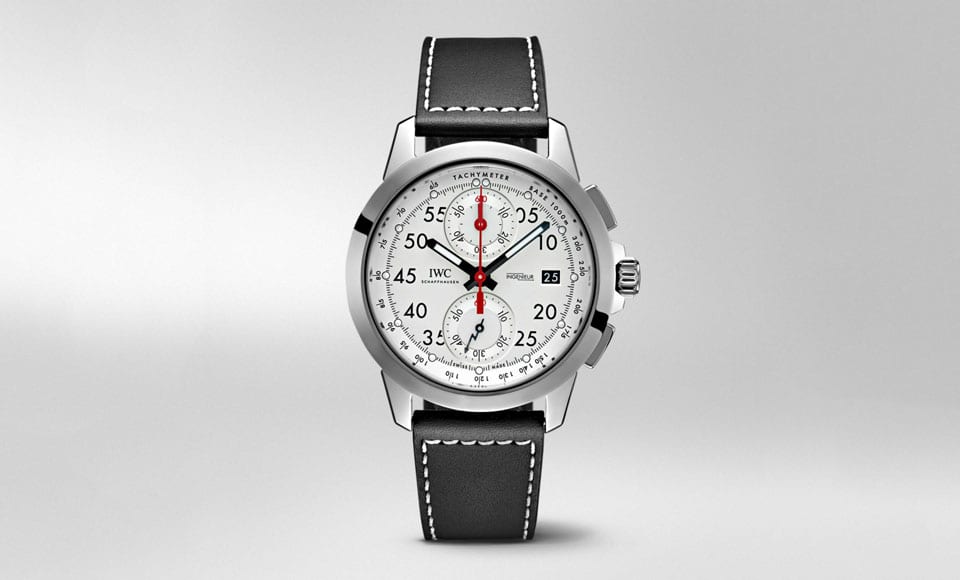 The IWC Ingenieur Chronograph Sport Edition is a tribute to the 50th Anniversary of Mercedes-AMG. Taking inspiration from the first Ingenieur models from the 1950s, the new variant injects a bit of modern technology in the form of a lightweight titanium case. The vintage lines continue with an intricate dial with striking hands and indices with luminescent elements. It also features a tachymeter scale that, when used together with the stopwatch hand, allows the wearer to calculate the average speed covered over a distance of 1,000 metres. The protection against magnetic fields on the case back is inspired by the carbon brake discs that feature on Mercedes-AMG cars. Only 250 units of this watch have been produced. 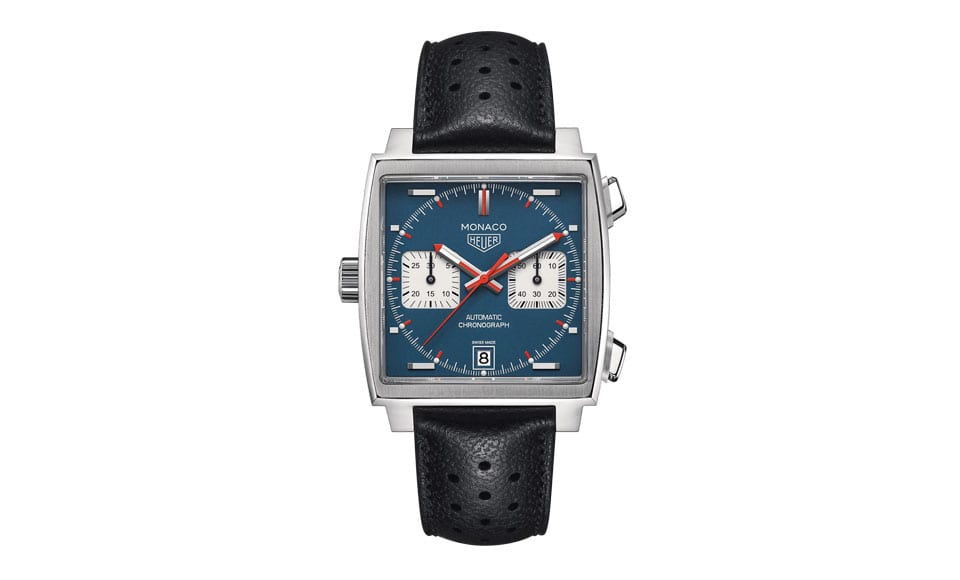 If the name doesn’t give it away then we don’t know what will. The TAG Heuer Monaco was inspired by the Monaco Grand Prix at a time where racing was as glamorous as it got. It first appeared in 1969 and was considered revolutionary thanks to its water resistant square case – the first ever, alongside the title as the first automatic chronograph. It was given even more racing pedigree when Steve McQueen wore the watch as part of his character in the 1971 film, Le Mans. After a big break from production in the mid-70s, the Monaco was resurrected in 2003 and today it sees renewed adoration as an icon of motoring watches. 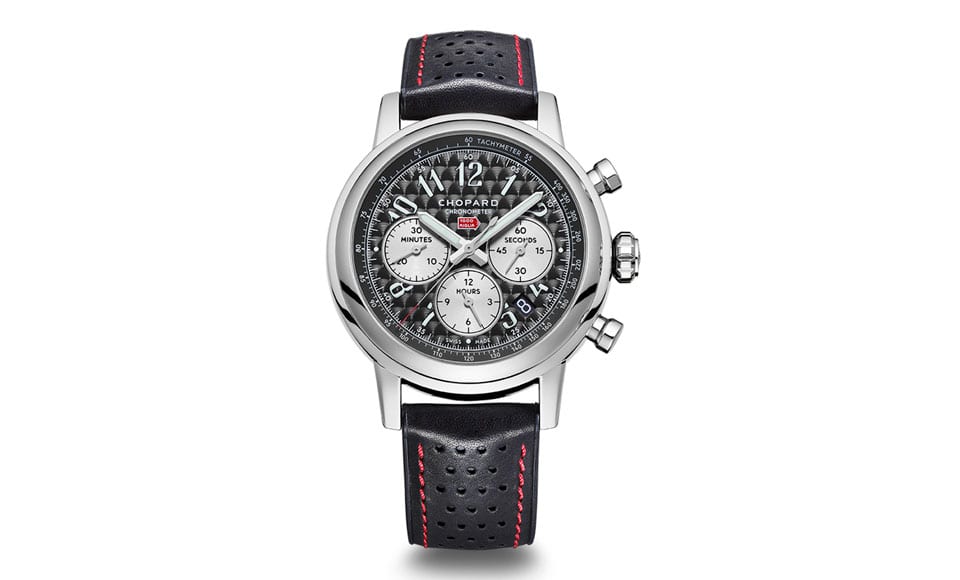 It might not be as well known as others on this list but Swiss watchmaker Chopard has been the partner and official timekeeper of la corsa più bella del mondo for 30 years now. To celebrate this milestone, Chopard created the special Mille Miglia 2018 Race Edition. It’s a timepiece which subtly evokes Mille Miglia racing cars from 1927 to 1940, with its anthracite engined-turned dial inspired by classical dashboards. The limited edition design is housed in a 42mm stainless steel case paired to a leather strap with rubber linin and emblematic red details throughout. 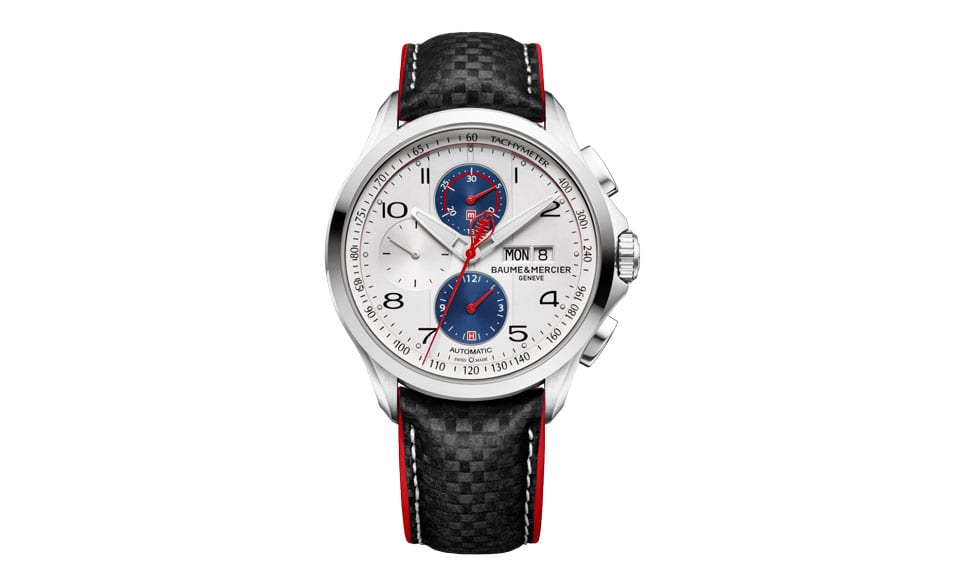 Any car lover will know the iconic American car known as the Shelby Cobra. Baume & Mercier certainly did and that’s why they partnered up with the carmaker to create the Clifton Club Shelby Cobra 10342. There’s plenty of motorsport appointments here from the smooth silver-colored dial with three subdials in silver and Daytona blue, to a red accented leather strap which mimics the appearance of carbon fibre. Functionality doesn’t escape this attention-grabbing piece which also boasts a sturdy water resistant rating of 50 metres. 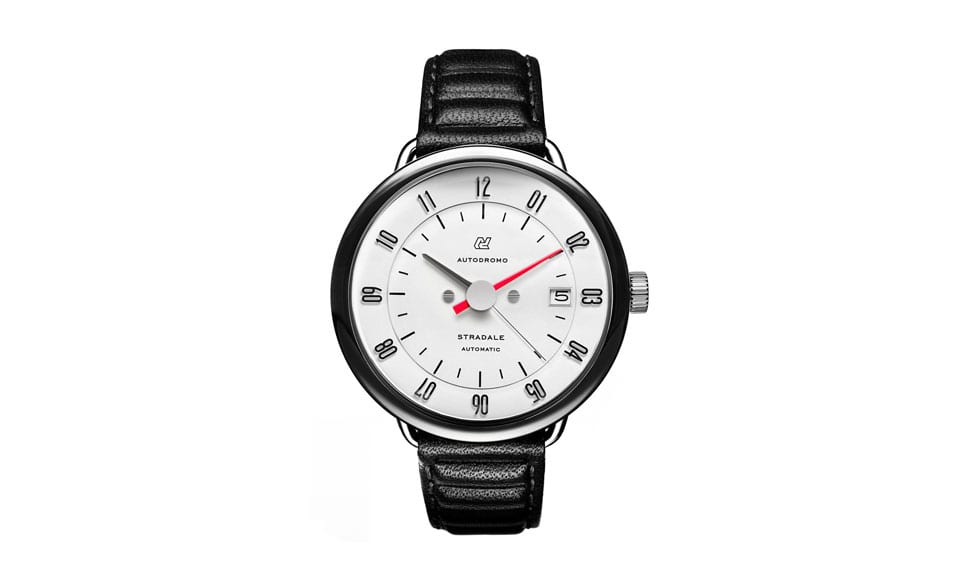 Taken straight from a dashboard of Italian sports Berlinettas of the late 1950s and early 1960s, Autodromo’s Stradale is a minimalist’s timepiece made for motoring enthusiasts. It’s most unique feature is a multi-layered dial which sees the hour indexes floating on a transparent glass ring. That transparent layer itself floats over the white dial to create a three-dimensional effect reminiscent of their motoring counterparts. Reliability of Autodromos are solid – the Stradale model is powered by a 24-jewel Japan-made automatic movement. The mechanism sits in a 40mm stainless steel case that’s paired to a black leather strap. A 50m water resistance rating should also help shall your Lotus Esprit also decide to become a submarine. 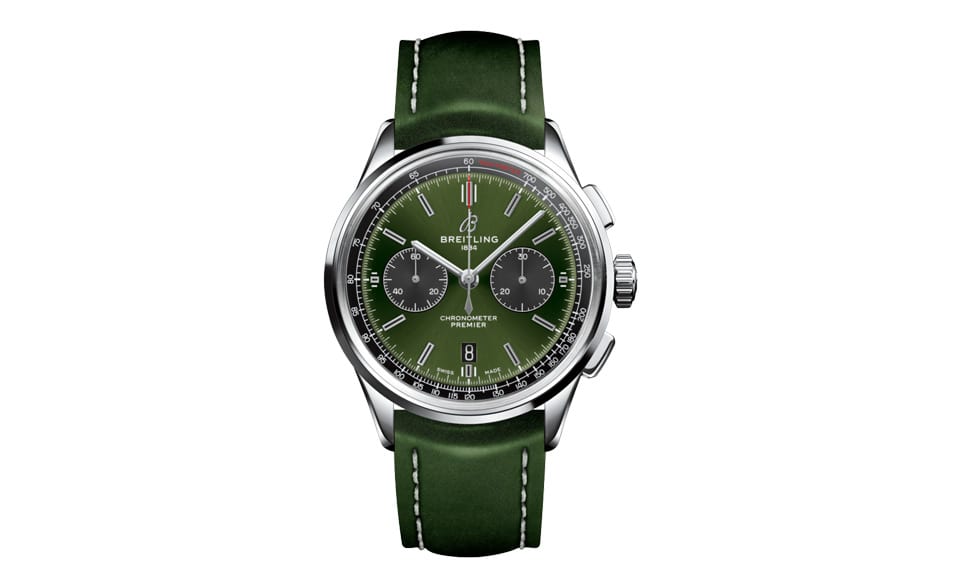 A newcomer for 2018 was a revamped and new look Breitling and Bentley collaboration. For year Breitling and Bentley made unsightly watches for men with no taste. Today that’s a totally different story. Under the leadership of Georges Kerns, Breitling launched the super elegant yet masculine Premier B01 Chronograph 42 Bentley in late 2018. Part of this launch saw the release of the racing green Breitling Premier Bentley edition. It’s 42mm case was a refreshing change from the 48mm versions and is definitely one of the best watches for the motoring enthusiast.