Finding the perfect snowboard boot is a make-or-break task; as it determines whether you’ll have a pleasurable day in the snowy mountains or if you’ll suffer excess pain and misery in the cold.

Deciding on the proper snowboard kit is intimidating, especially when there are so many things to consider when searching for the best pair of boots. You’ll need to think about heel support, lacing, gripping, insulation, riding style… the list goes on and on. And, once you’ve found your perfect pair of snowboard boots, you’ll need to combine them with a set of bindings to ensure you get the most stable connection to your snowboard.

However, despite endless requirements for suitable gear, ultimately your boots must be snug and tight-fitting, offering maximum comfort. Snowboarding is a vigorous sport, the least you can do is choose a pair of boots that will make you feel supported and confident while shredding through powder. Failure to invest in the proper boots could severely impact your snowboarding performance.

Is it better to have tight or loose snowboard boots?

Snowboard boots should be snug everywhere - at your heel, instep, and toe-box. When you first try on your boots, lace them up tight, as this will help push your foot to the back of the boot, allowing your toes to have extra room. However, don't panic if your boots initially feel too tight, as it takes a few weeks of riding before they perfectly mould to your feet.

Are snowboard boots supposed to hurt?

While snowboard boots should be a snug fit and may, at first, feel tight; they shouldn't hurt your feet. If you're experiencing pain, this could be because of excessive flattening of the arch that occurs during inward turns. When your foot flattens the ligament and your muscles at the base of your foot are stretched beyond the norm, which causes arch pain. To avoid heel and arch pain while snowboarding, tighten your boots and ensure you have the proper interior padding.

Should you buy snowboard boots a size bigger?

You want to purchase snowboard boots that are the same as your shoe size. At first, your boot may be tricky to take on and off, however, this doesn't mean they're the wrong size as eventually, the liner will pack out, making it a comfortable fit.

Here are the best snowboard boots available and some key technologies to look out for. These snowboarding boots will ensure you pick up your game in comfort and style. See you on the slopes! 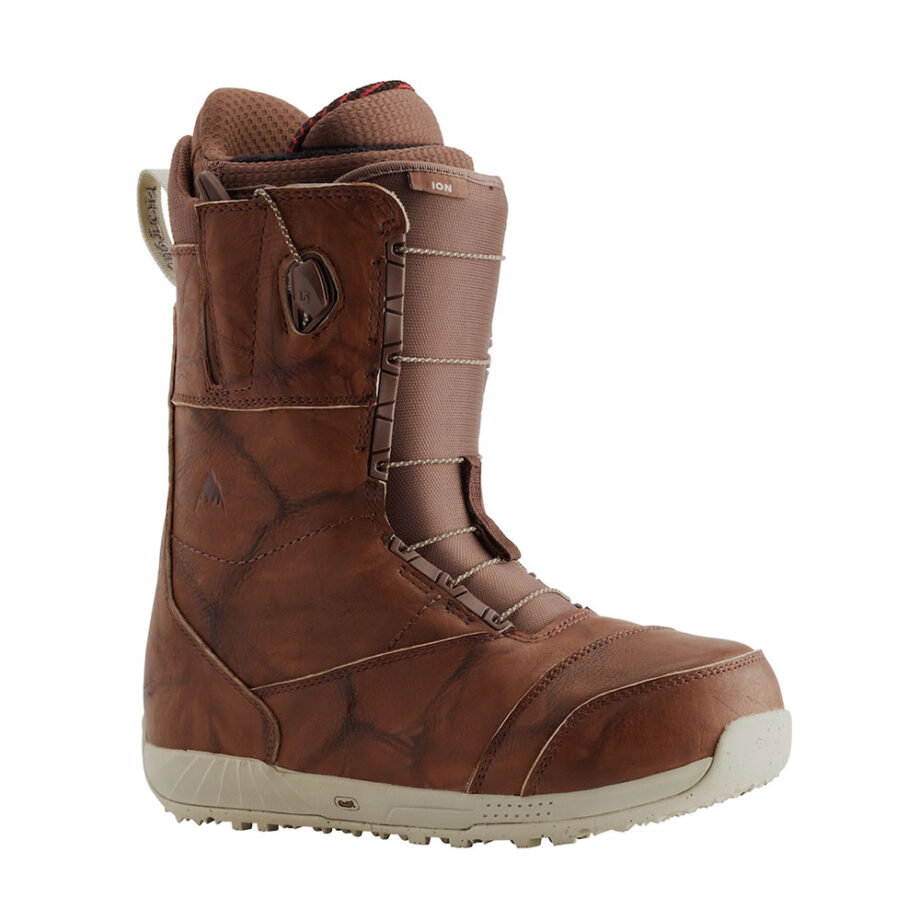 Founded by Jack Carpenter Burton in 1977, Burton is one of the leading snowboarding brands, making groundbreaking products and technology. Burton are world champion innovators and leaders in the sport, taking on all the feedback from their customers to create the best snow products possible. Producing some of the best snowboard boots, they have a wide range of footwear available including Boa, freestyle, park, and all-mountain boots.

If you're looking for a pair of Boa boots, then have a look at their Men's Burton Photon Step On Snowboard Boot. Featuring Boa lacing, these snowboard boots are a cosy fit and include an easy lace adjustment with a twist a dial. These boots are also made from American fibres and are virtually indestructible, ensuring they won't kink and are easy to re-lace.

But if you're looking for a pair of snowboard boots featuring dual boa lacing, may we suggest the Men's Burton Ruler Step On Snowboard Boot? Made to be versatile, the Burton Ruler Step on has added durability and micro-adjustability from a Boa system with Coiler Technology. Simply step onto the binding and away you go.
Shop Now 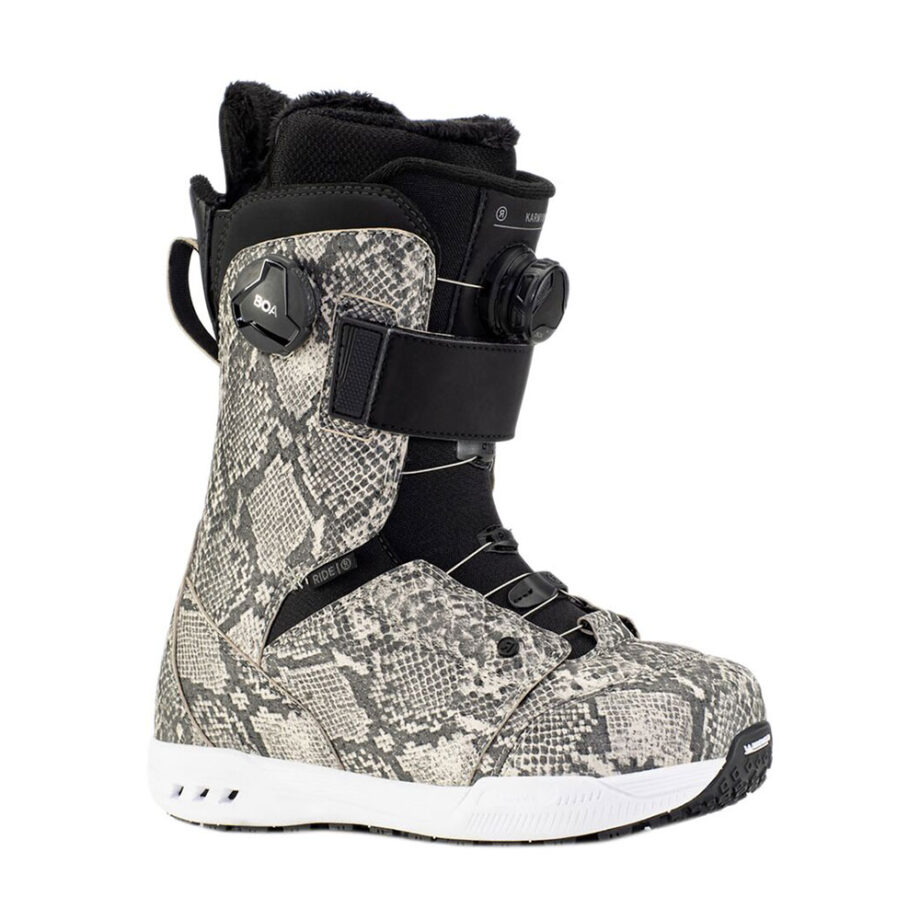 Ride is a top-tier brand as it's committed to producing high-quality snow gear. Founded in 1992, in Redmond, WA, Ride is embraced by pro-athletes and up-and-coming riders as they create equipment made "for the people" and have never strayed away from this goal. Built with superior technology and materials, Ride's snowboard apparel is made for those who love the outdoors.

Among some of their finest winter attire are their snowboarding boots - the very best traditional boots tailored for freestyle riding. Their Ride Anchor Lace Snowboard Boot comes in a striking Autumn Blaze colour and has a Boa adjustable dial designed with a classic lace closure system. The boots also have heat-reflective foil, guaranteed to keep feet warm in the coldest conditions.
Shop Now 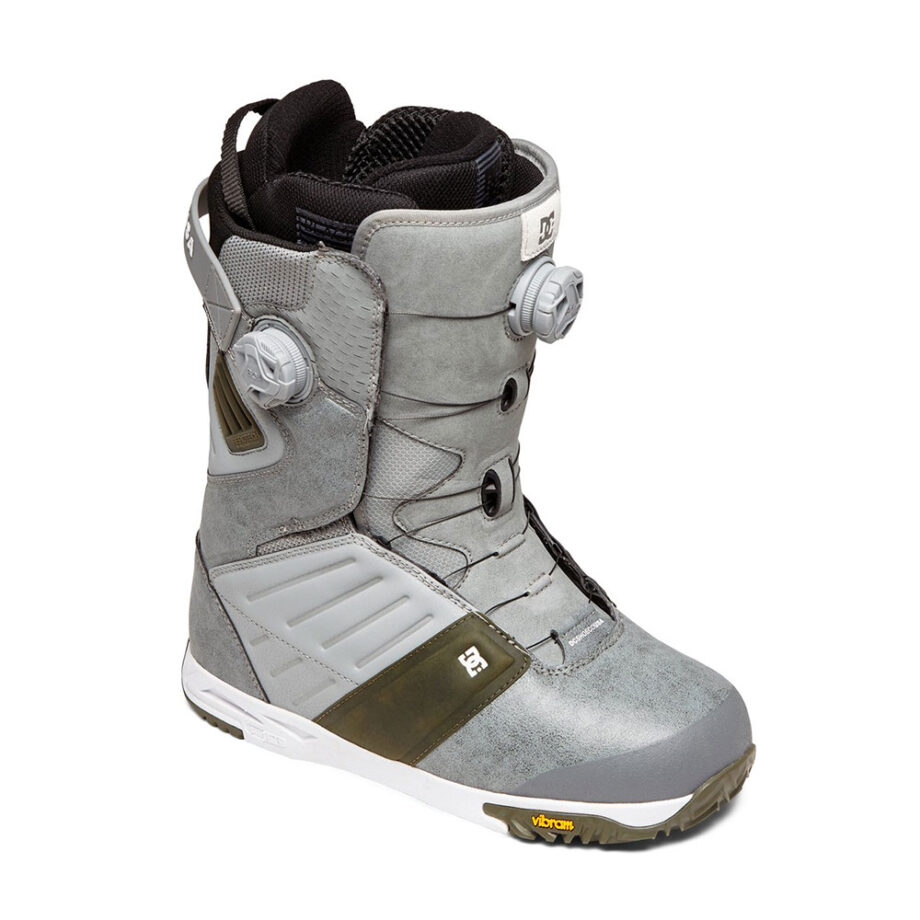 DC shoes have been at the forefront of the skating and action sports scene since 1994. Although the brand is mainly affiliated with skateboarding products, it’s also home to some of the most impressive winter gear and accessories. DC Shoes has built a world-class brand with pro athletes supporting its promotional efforts, embracing its signature style. Offering high-quality shoes, for every sport, you know DC has some impressive snowboard boots.

The DC Travis Rice Boa snowboard boot is an award-winning boot, thanks to its responsiveness and comfortability. This boot has it all, from its asymmetrical anti drag design to its carefully crafted interior that offers a BOA focus closure; you've never seen a pair of boots this well constructed. Its strategically-placed Carbitex also increases responsiveness, guaranteed for easy control while feeling extra lightweight on your feet.
Shop Now 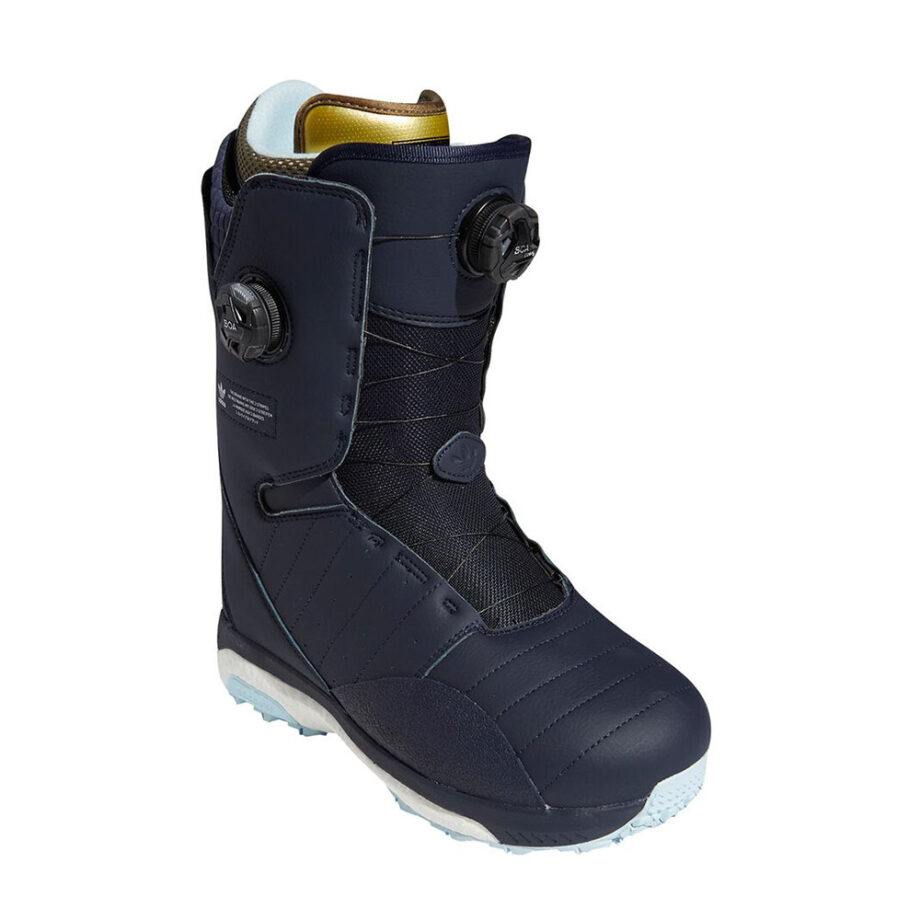 The Adidas Snowboard boot collection is highly versatile, as there's something suitable for everyone, no matter what your riding style is. Whether you're hiking up some of the steepest mountains, or free-riding at your local ski resort, Adidas have boots made for aggressive riding while offering maximum comfort.

The Acerra ADV Snowboard Boot has a Double Boa system that gives you a cosy fit and is easy to adjust on the go. The H3 Boa Fit System lets you dial in the fit and feel of both the ankle and foot regions, designed for you to alter a perfect fit every time. Additionally, the heat-moldable liner fits the boot to your foot's exact shape and the boost midsole provides extra support with its cushioning.
Shop Now 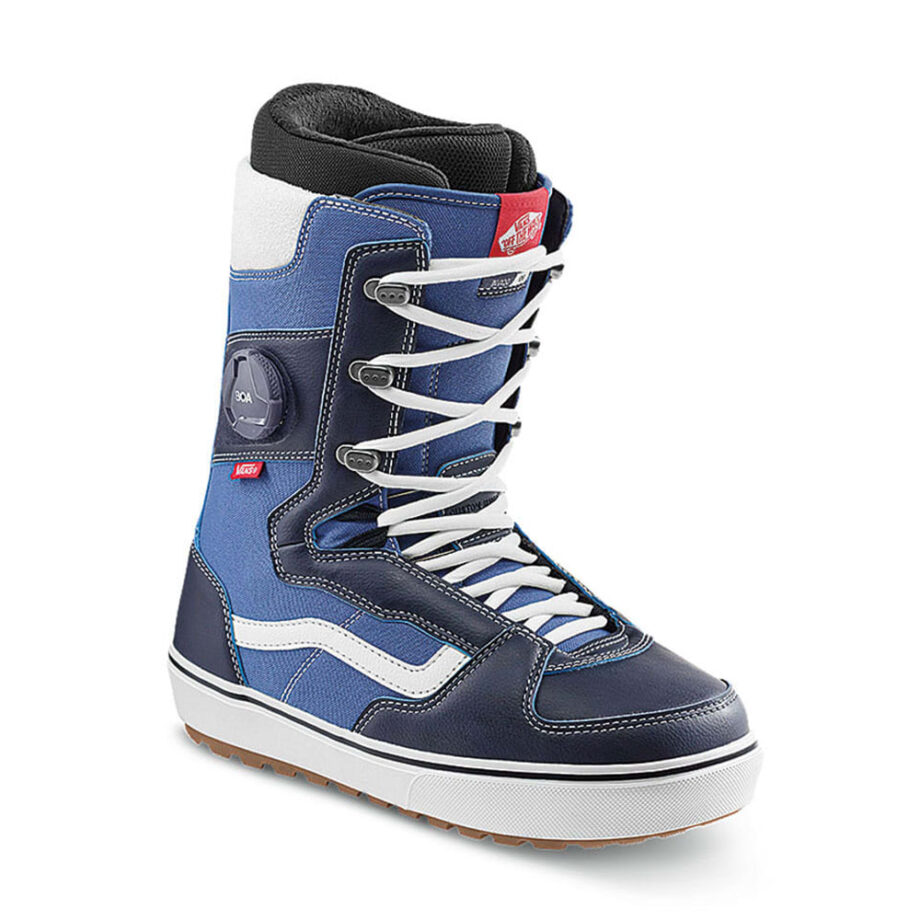 Vans are offering a large collection of ski boots, available in all different, shapes, sizes, and colours. Their Vans Auro Pro comes in a cool grey, well-polished design, providing you with a locked-in feel through its Boa Custom lacing system. This custom focus includes a high power coiler reel and mid-power remote reel that promises concentrated closure around the instep area for a focused heel hold.

However, if you're looking for something demonstrating a little more grip, why not try the Vans Hi-Standard Linerless boots? They are the best all-mountain snowboard boots with their lightweight construction and a user-friendly lacing system that allows you to tie boots effortlessly. These boots are made to be used without a liner and are a freestyle park boot made to feel super soft with its V1 PopCush Footbed.
Shop Now 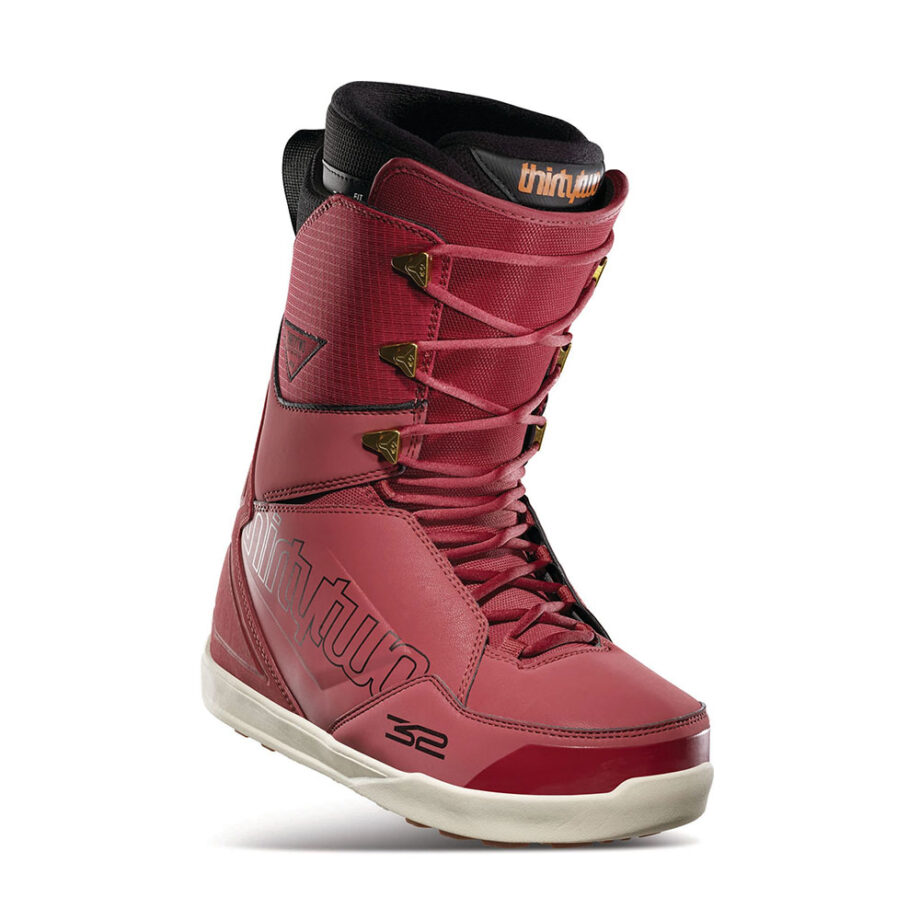 Speaking of which, a favourite snowboard boot for Chris Bradshaw is the brand's Lashed Snowboard boots that offer a performance rubber outsole with Evolution Foam Cushioning. Designed to be a super responsive and comfortable fit, the boots are suitable for all riders, no matter what their experience level is.

Also, while you're there, check out Thirty-Two's Premium Snowboard Boots as they're sure to enhance your performance with a fit liner design and tongue stiffeners, added for extra support. These boots also offer a performance rubber outsole and an energy foaming cushion, with a heel hold kit ensuring you won't get fatigued when faced with a long day of riding.
Shop Now 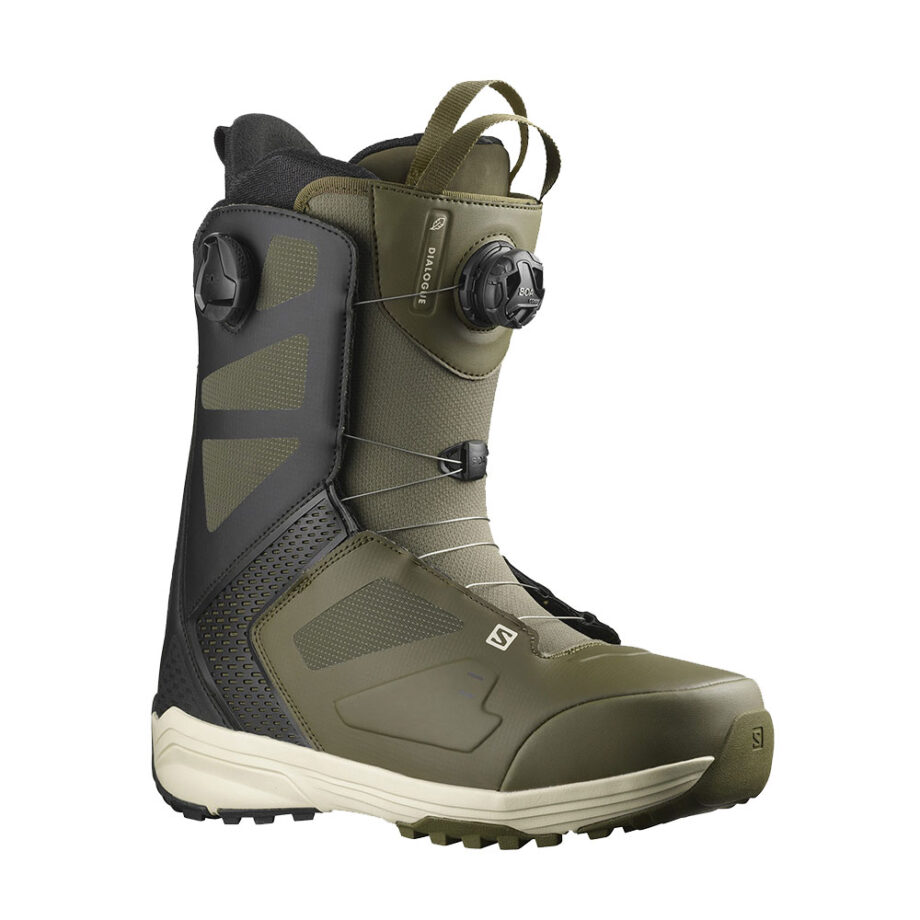 Salomon got its start designing mainly skiwear and ski equipment, however, they quickly rose to prominence in the snowboard industry for their broad range of high-quality products. Salomon is an absolute to-go this snow season as they have all types of high tech snowboard boots suitable for all weather conditions. From boosting backcountry to crushing park lines, you're sure to find a pair right for you.

Their Dialogue Dual Boa comes with a Boa fit system that allows for easy adjustment on the foothold for both the upper and lower regions of the boot. Meanwhile, its dialogue exclusive heel cage provides a progressive and durable flex. While promising a stiff flex, the boot also features DAMPLite+ which gives you extra grip, and a dual-density insole that moulds to your foot ensuring maximum comfort.

Another top pick from Salomon is their Faction Boa boot; a soft flexing boot that promises first-rate support and durability for those looking for progression. Built to make you feel light while you ride, the D-Light outsole reduces weight and shock absorption as the boot is 10% lighter and 10% more compact, and is guaranteed to improve performance.
Shop Now 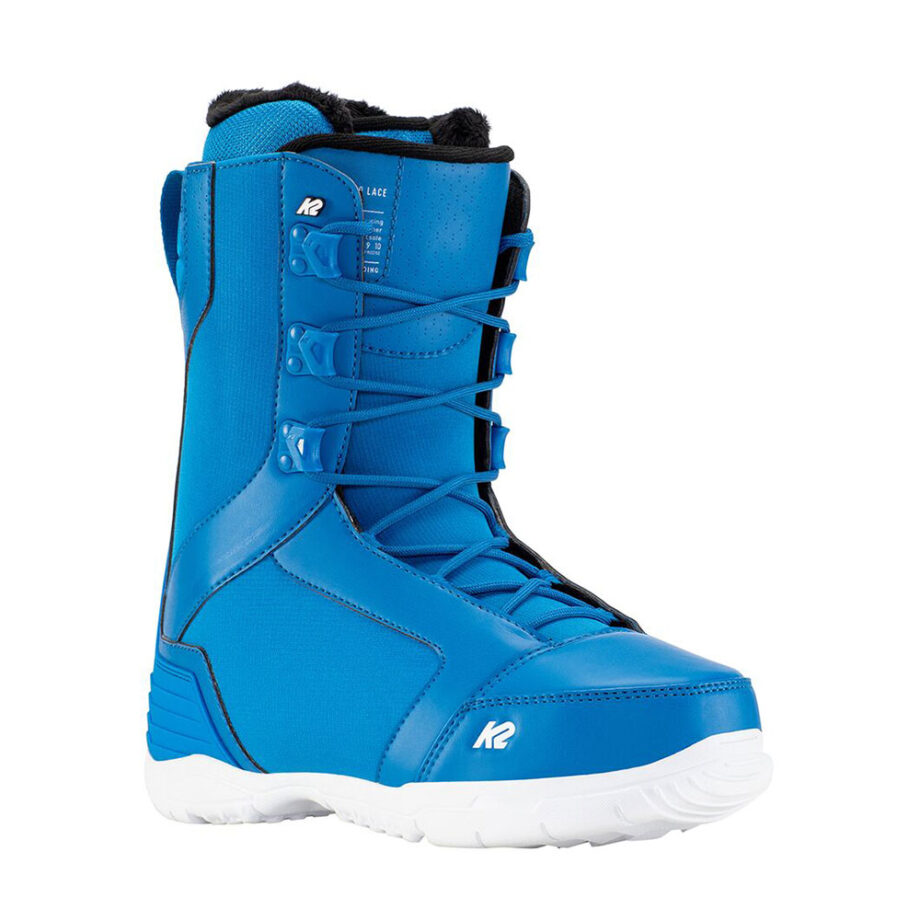 K2 has supported snowboarders globally for over 25 years, through its authentic and innovative products, guaranteed to provide you with an awesome day on the slopes. Going back as far as 1962, K2 founder Bill Kirschner was one of the first to manufacture sets of fibreglass skis, prompting him to create a collection of ski gear. K2 are pioneers in the industry, so you always know you're in good hands when it comes to searching for the best equipment for the snow.

K2's snowboard boots are some of the best snowboard boots on the market, offering slick technology that allows you to feel extra light while you tackle the slopes. The Renin Boa Snowboard Boot are a freestyle favourite due to its H4 Coiler Boa system that lets you tighten upper and lower zones for a custom fit, while the Boa Mobility Conda liner keeps your heel locked down - but is still super responsive. This medium flex boot also comes with a Vibram RollSole outsole for lightweight durability and grip.
Shop Now 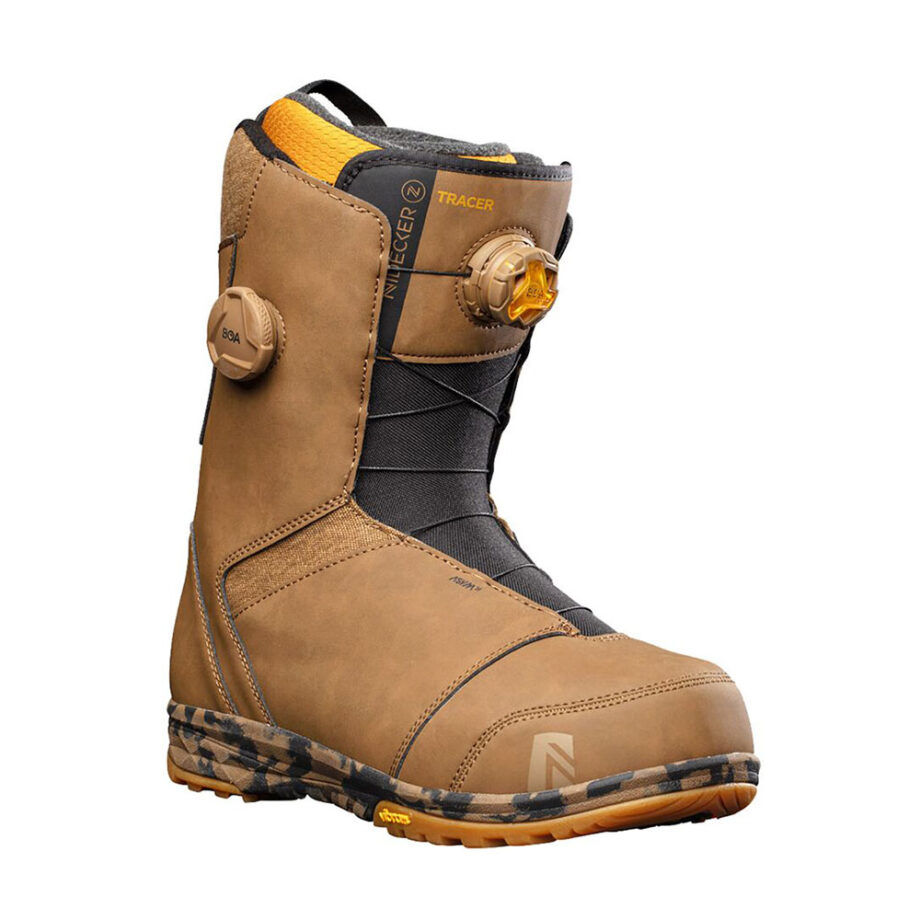 Nidecker is a family-owned Swiss snowboarding company that has been delivering the best-made winter apparel and equipment since 1887. The company's founder Henri Nidecker I launched the business in the small town of Etoy, Switzerland. Trained as a carpenter, Henri used his knowledge of wood bending to manufacture skis. Gradually, the brand expanded to creating all sorts of gear for alpine sports and we're so glad they did as they incorporate groundbreaking technology in all their designs.

Nidecker boots promise ultimate comfort and support. The Nidecker Triton Boa Focus Snowboard Boot is designed to feel like a custom fit. The Nidecker Triton Boa Focus is a clean, mid-still made to scale the harshest mountain terrain. Its Boa H3 Focus dials allow you to tighten separate zones of the boot giving support while letting you alter your style of riding. The snowboard boots will also keep you feeling dry as it comes with odour-resistant, moisture-wicking properties, guaranteed to keep you fresh while you work up a sweat on the slopes.
Shop Now 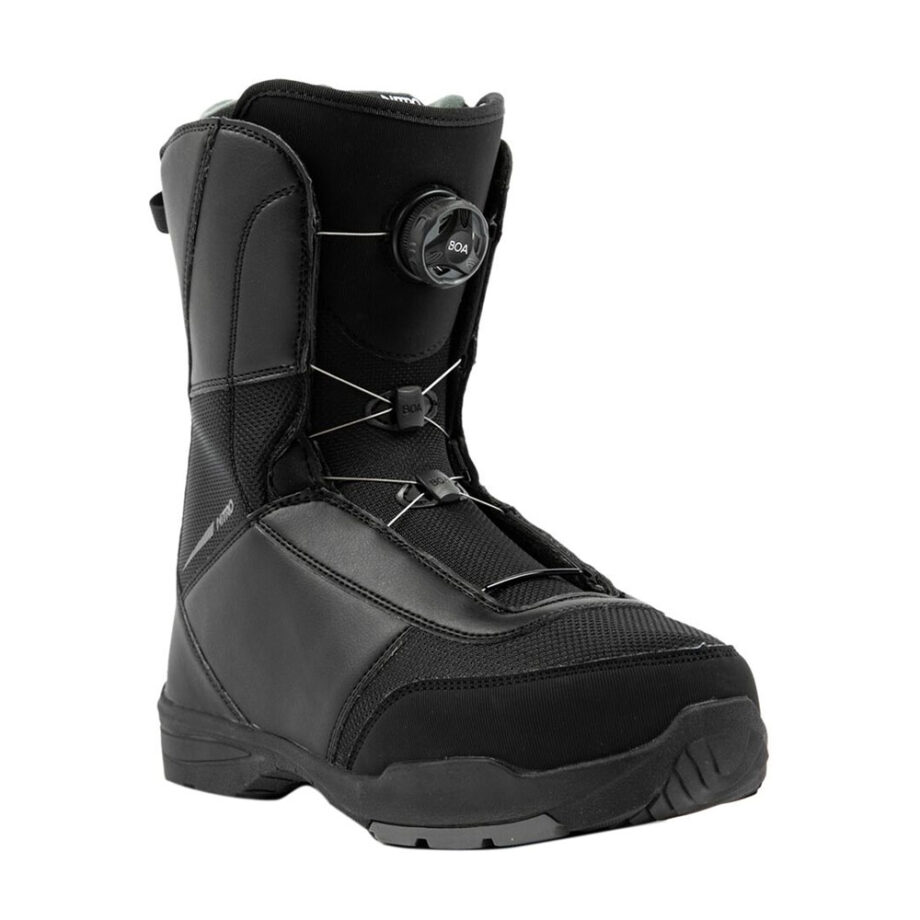 Guaranteed to provide you with some of the best, well-fitted boots on the market, Nitro has been designing equipment for the past 25 years, serving classic traditional gear, updated with newly developed technologies.

Nitro's range of snowboard boots are built for top-tier versatile shredding as many of their boots offer a thermal-moldable liner which help to create a customized fit. If you're looking for a clear-cut traditional boot for a great price, then Nitro 's Team TLS Snowboard boot is for you.
The mid-still flex offers response and support for bigger terrain while its Armored Spine adds further stability for charging steep mountains. Its Vibram EcoStep sole also lends a sure-footed grip for hiking and fresh turns, especially on hard ridges and icy surfaces.
Shop Now