Snowboarding has come a long way since 1965 when Sherman Poppen, “father of snowboarding”, bolted two snow skis together and paved the way for the modern board. What was initially referred to as a “Snurfer”, got its name from Poppen’s wife, who described the newly invented sport as ‘surfing for the snow’. Poppen later attached a rope to the initial model, for better steering. And to think that’s all he needed when riding.

Thankfully, snowboarding has become a revolutionary, highly celebrated winter sport. Often applauded for its innovative gear, snowboarding is where technology and fashion meet. The most important thing to consider for your new winter wardrobe is finding apparel that will keep you warm without adding bulk. A high level of mobility is key; movement should be easy and unrestricted in your gear. Also, insulation is a must when facing those unforgiving cold climates.

It may seem like a daunting task choosing a reputable snowboard brand to purchase apparel from; you want to make sure you have all the added extra layers while the right outerwear (that’s as functional as it is stylish) is imperative.

Can I wear jeans while snowboarding?

No. It's highly recommended that you stay away from all cotton materials and this includes jeans. Jeans and other cotton clothing such as sweatshirts, sweatpants, hoodies, will absorb snow and sweat and make you cold. Not to mention, jeans also restrict movement, making it incredibly difficult moving around in the snow.

What jackets do snowboarders wear?

Snowboard jackets are usually waterproof or water-resistant that often come with breathable materials too. Jackets that are insulated are great as they allow you to stay warm in the harshest weather conditions. The majority of ski jackets are 3-in-1 jackets, technical shells, or soft shells that help manage the temperature.

With snowfields slowly reopening post lockdown, we have curated the best snowboarding clothing brands to check out this winter. We’ve even thrown in some affordable brands too, so any rider can hit the slopes for reasonably priced high-end products that don’t compromise on performance. See you on the slopes! 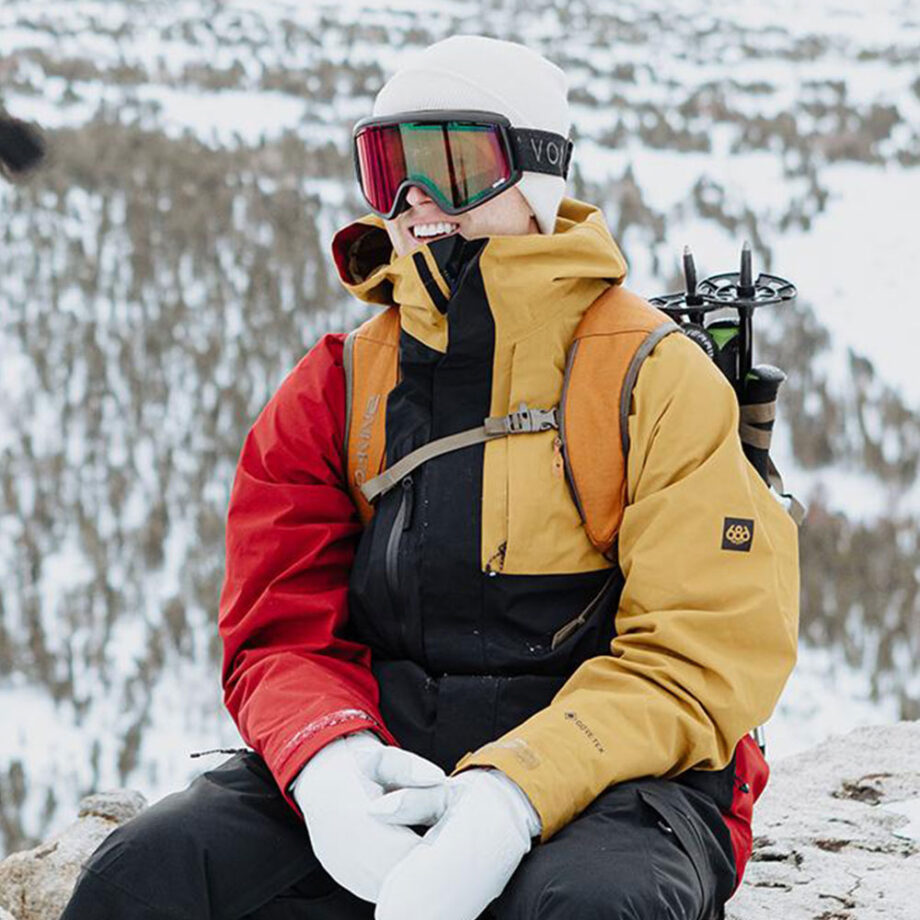 After exhausting the skating scene at Venice Beach, 686 founder, Michael Akira West began snowboarding and soon loved everything alpine-related. 686’s clothing is regarded for being both high-tech and fashion-forward.

What makes 686 different is they draw influence from unexpected places. With its apparel emulating a vintage and punk style, you’re sure to look like no one else while you ride down the mountains when repping this snowboarding clothing brand.
Shop Now 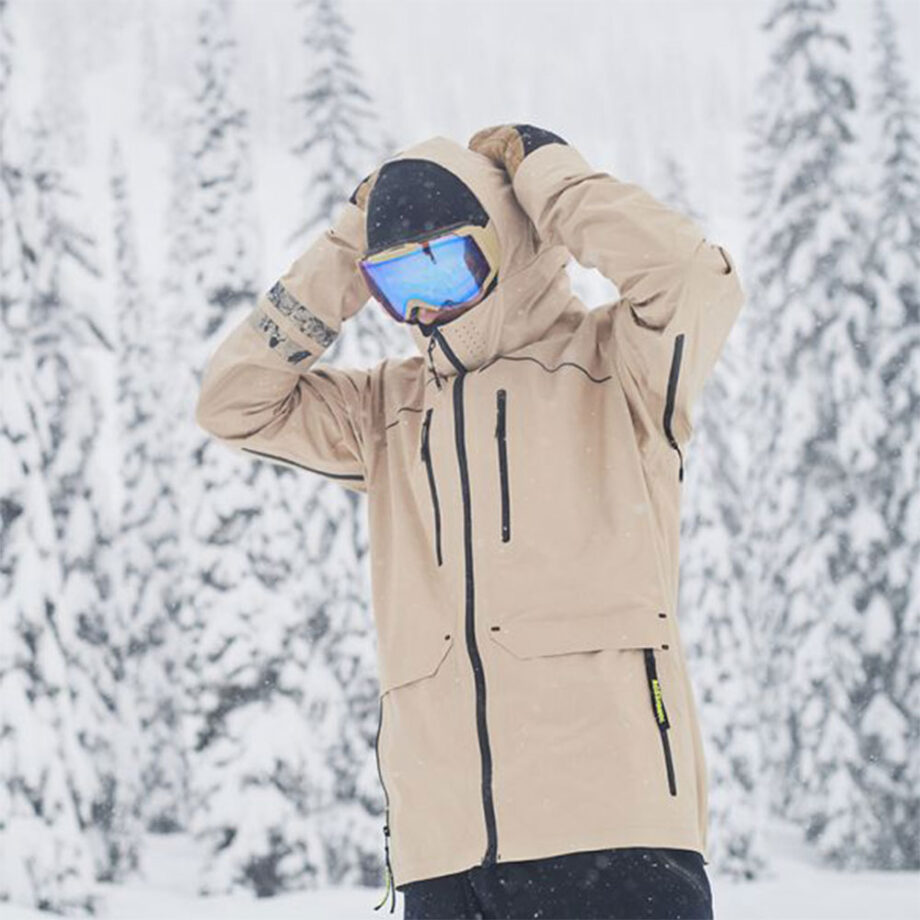 Founded by Abel Rossignol in 1907, the Rossignol brand is an expert when it comes to sport and has been an industry pioneer for over 100 years. The French manufacturer of alpine, snowboard and Nordic equipment was even one of the first companies to produce plastic skis.

Today, the company produces all types of ski and snowboarding equipment, including high-performance jackets and pants making it easier and more fun to ride.
Shop Now 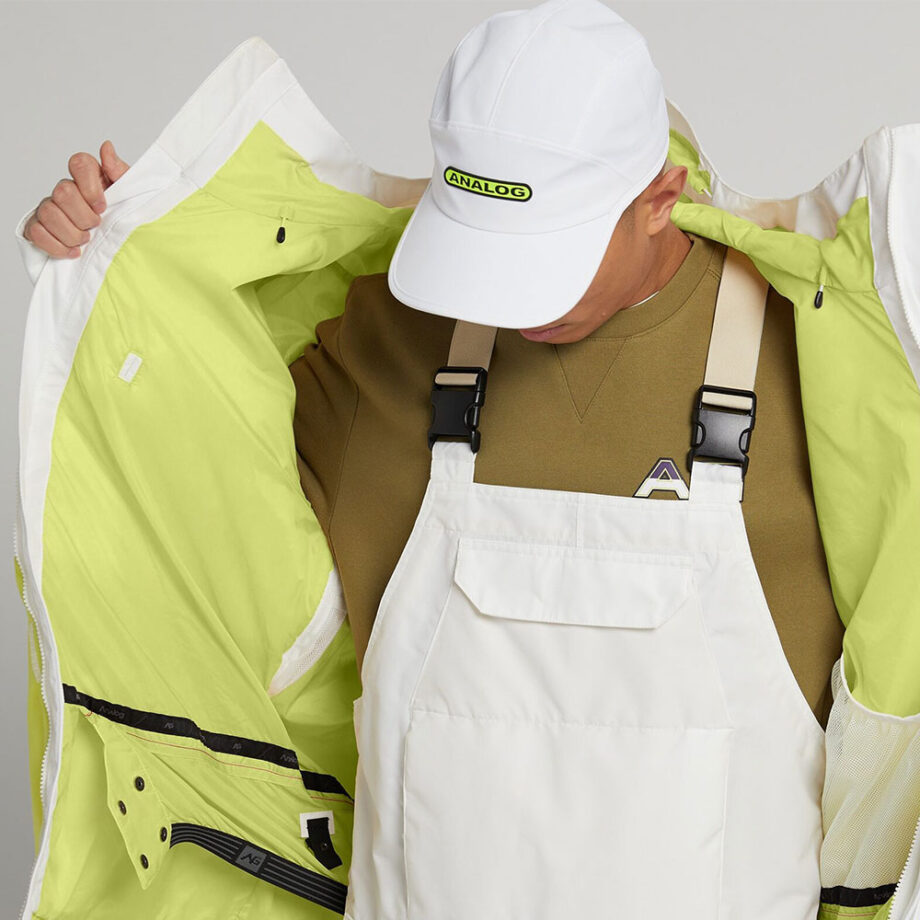 Initially starting back in 1998, Analog quickly became a reputable name in the snowboard industry. In 2003, it expanded into a line of soft goods, offering the most stylish garments for skiers and snowboarders on the market. Analog is dedicated to delivering fun and creative snowboarding clothing while always keeping its fingers on the pulse of fashion evolution.
Shop Now 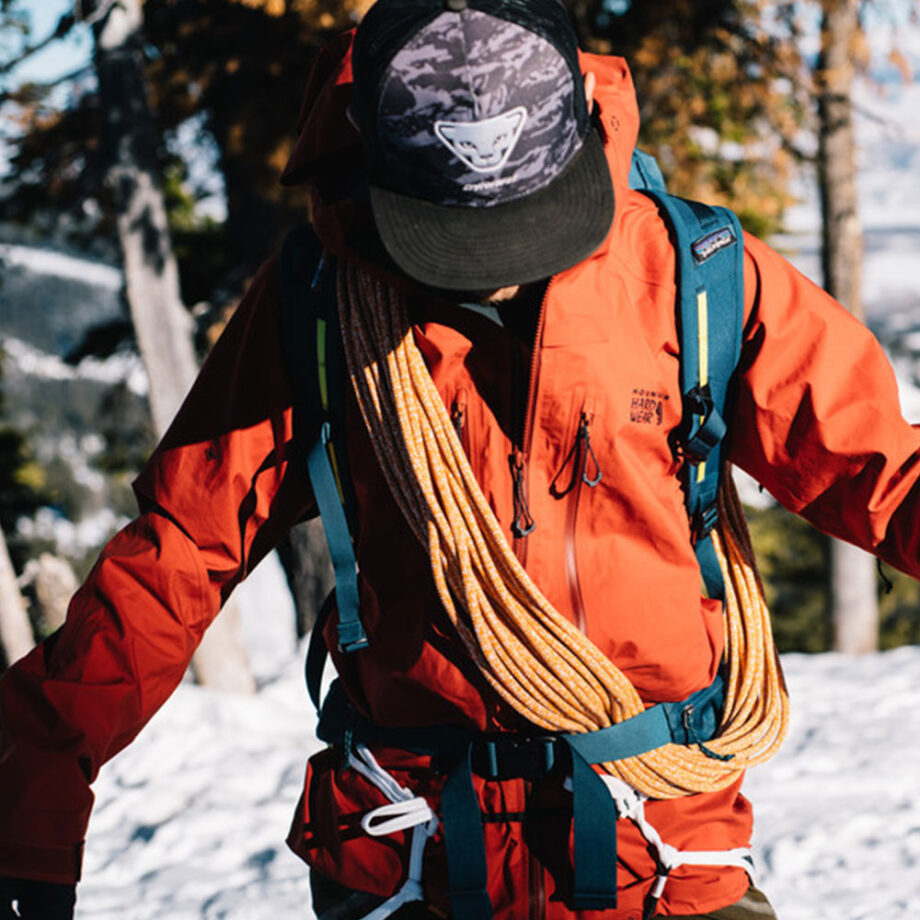 Mountain Hardware is often regarded as one of the best snowboarding clothing brands, as they are all about creating apparel and equipment that'll empower their customers. Founded in 1993, the company wanted to produce high-quality goods as they saw the industry comprising and only providing average products for less experienced users. Mountain Hardwear was founded to buck this trend, to serve the needs of outdoor athletes. Not to mention their new robust load-hauliers are perfect for full days out on the hills.
LINK 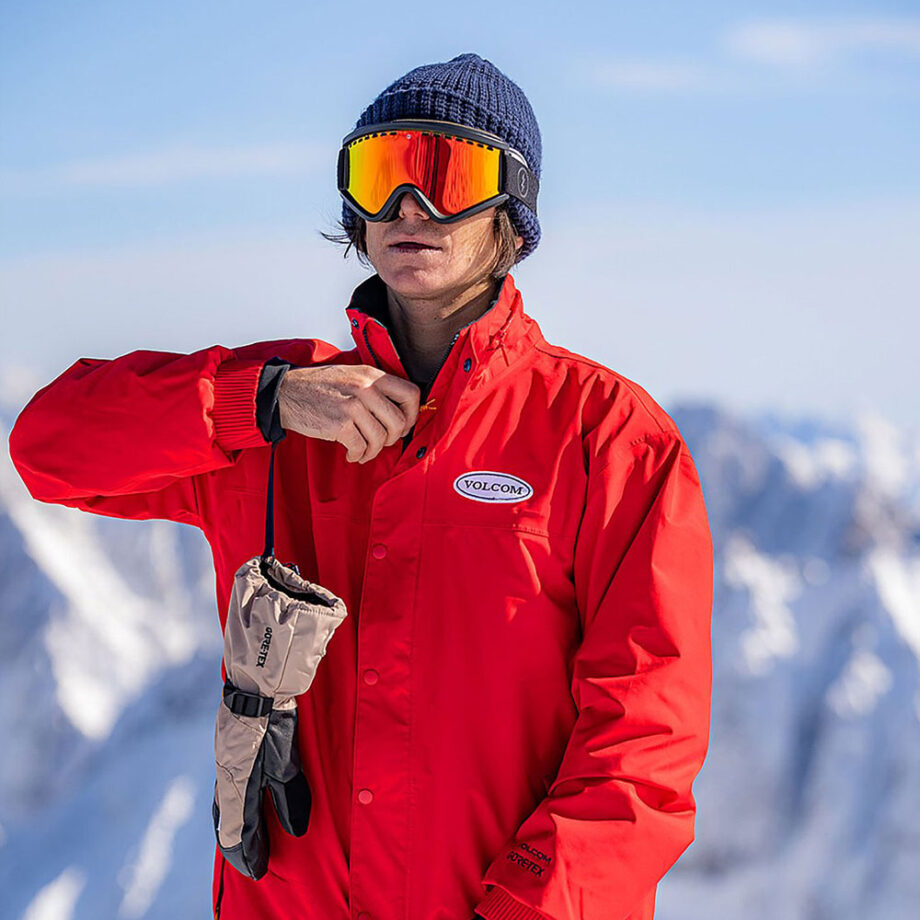 Known for their funky colours and patterns, Volcom is taking risks when it comes to snowboarding clothing. Headquartered in Costa Mesa, California, their snow gear is made for quality and style. They’ve even sponsored some of the industry’s biggest icons and wildcards like Ozzie Wright and Ryan Burch. Recently, Volcom apparel made it to the silver screen and was featured in season two of Outer Banks.
Shop Now 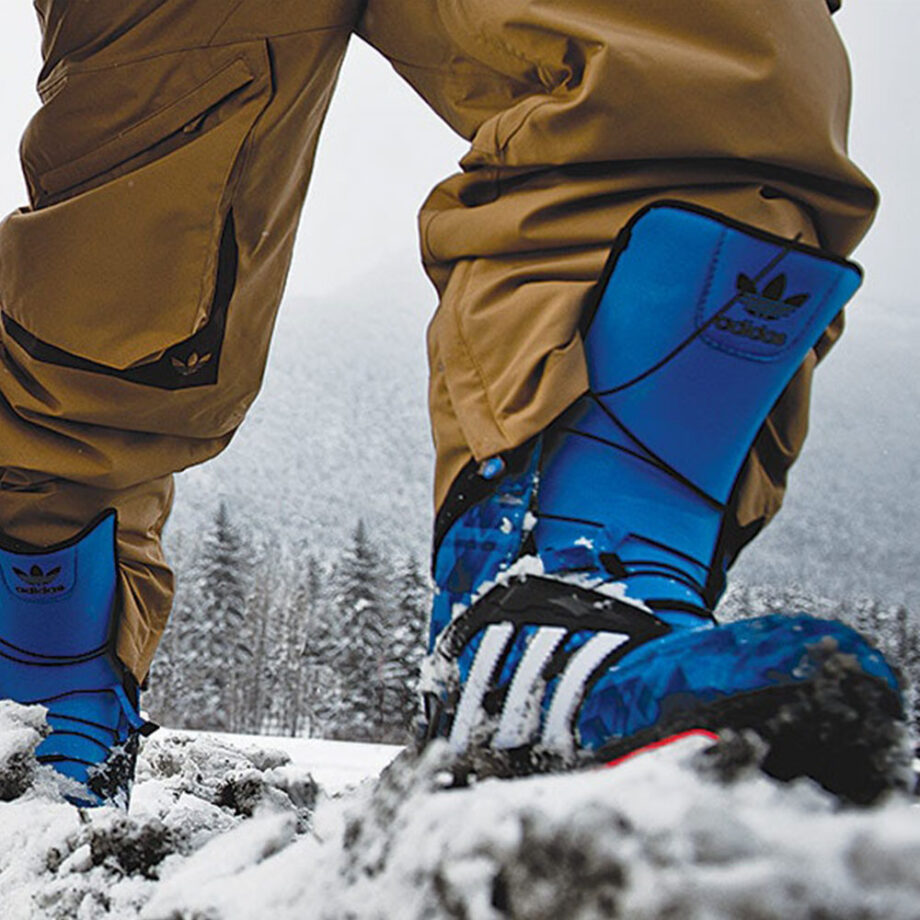 They may be most recognisable for their sneakers, but Adidas is offering some of the best snowboarding clothing and equipment too. Adidas Snowboarding caters to every style and budget, specifically made for the penniless rider who still wants to look fly. The Adidas boots are either a traditional lace-up system or the popular double BOA system, but all are super comfy.
Shop Now 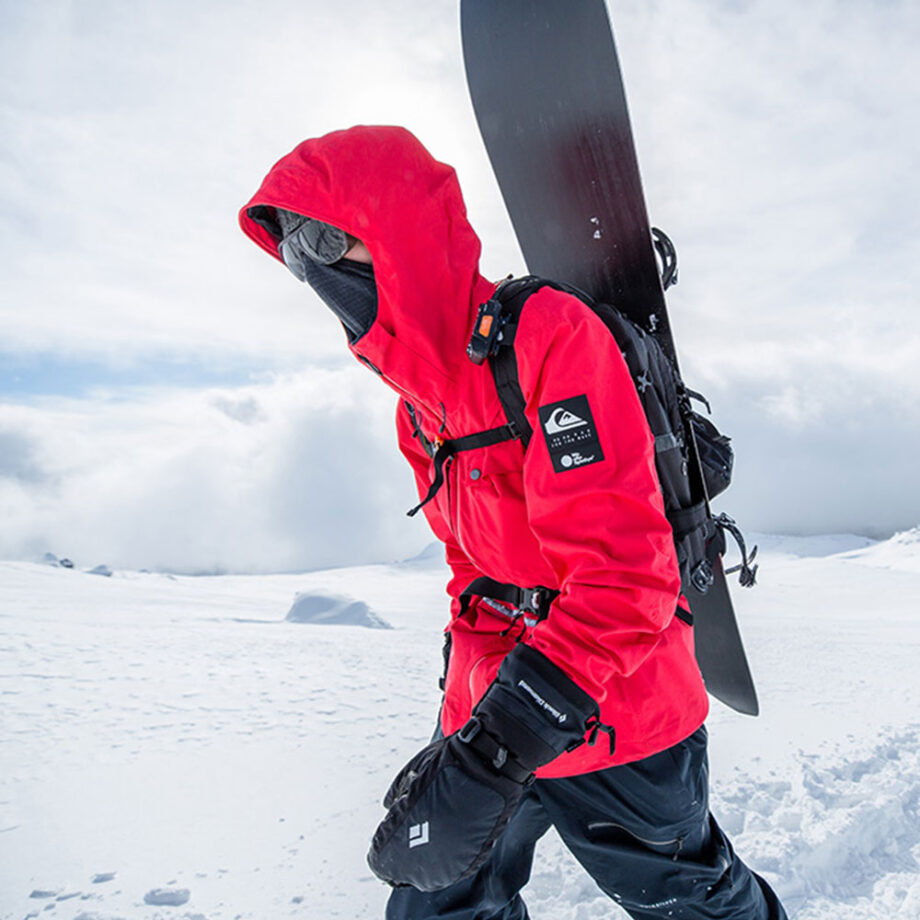 Quiksilver, Australia’s premier snow retailer are dedicated to creating products that are high in both quality and performance. The name Quiksilver was derived from the ancient alchemists’ term for turning the base metals into gold. A suitable name for a company that aims to turn good fabric into extraordinary products. Its snowboarding clothing collection includes the warmest of jackets, many of them made from recycled 4-way stretch polyester, to make mobility easy.
Shop Now 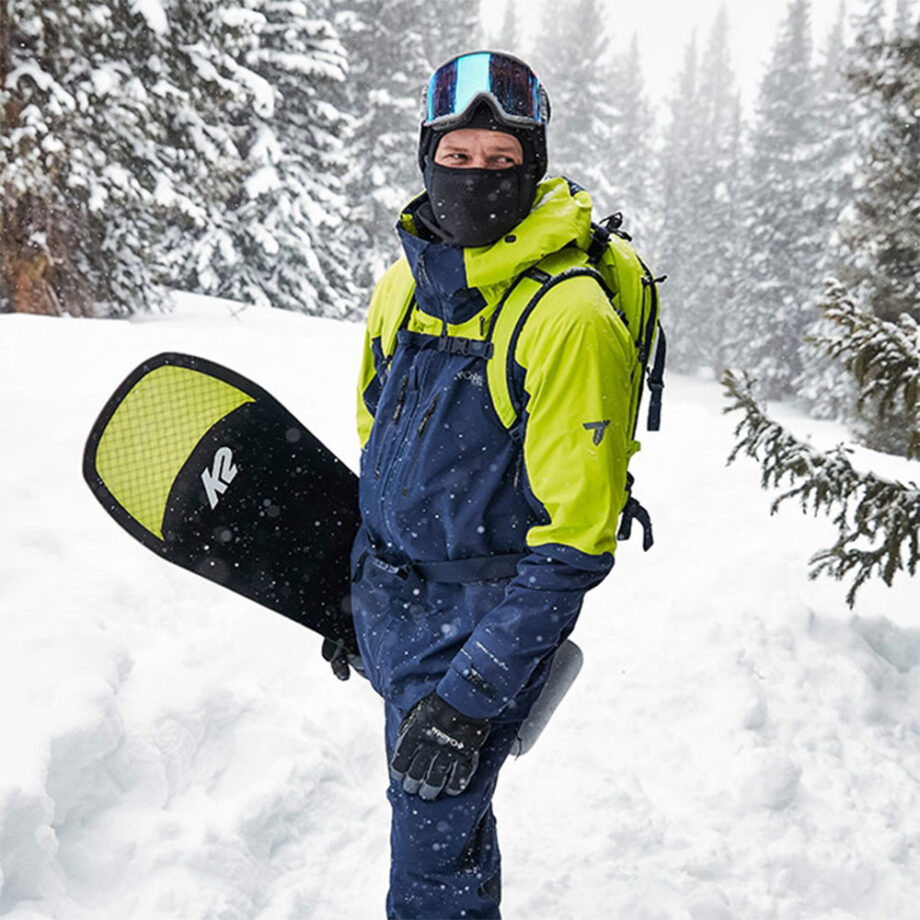 Columbia has some of the warmest, well-built jackets, so it's no secret they're one of the world's best snowboarding clothing brands out there, offering the most affordable prices too. Many of the 3-in-1 jackets are built-in with a waterproof-breathable shell providing maximum warmth thanks to its Omni Heat technology. Its sleek designs and reasonable prices make Columbia outerwear a must-have for the snow season.
Shop Now 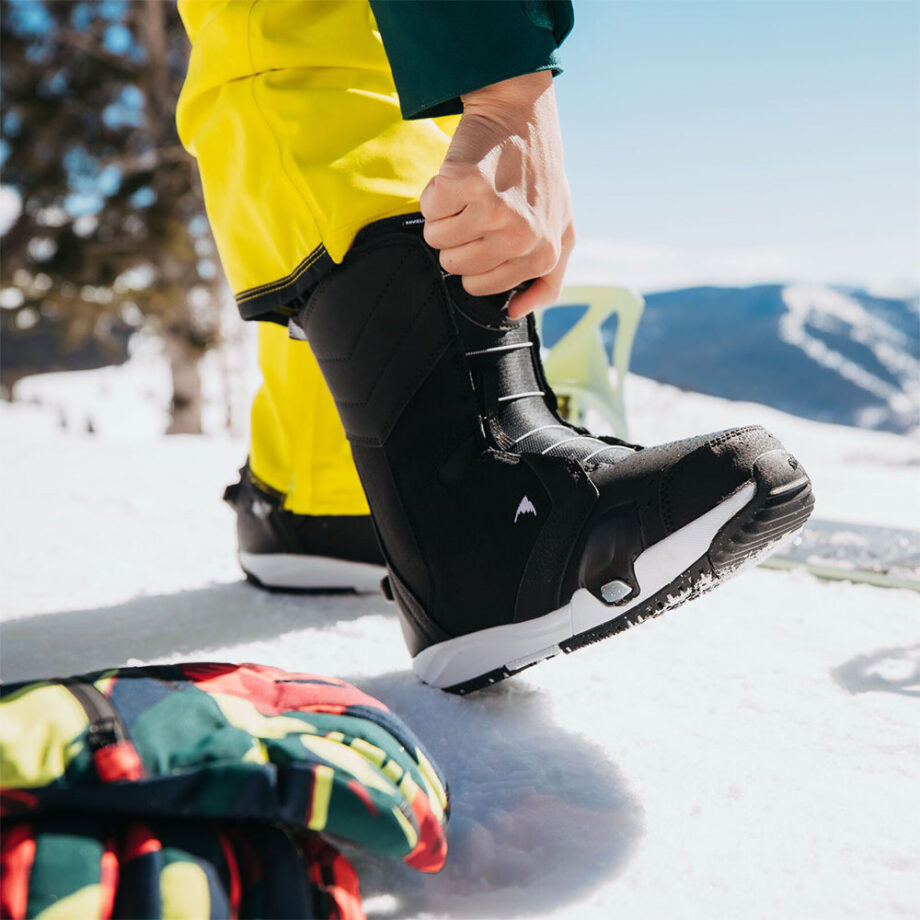 Burton has been a leader in the snowboarding industry ever since Jake Burton Carpenter launched it out of a Vermont barn in 1977. Today, it is one of the largest snowboarding brands in the world, embraced by both beginners and professionals. An award-winning brand, known for its innovative graphics and cutting-edge technology, Burton delivers top-of-the-line snowboarding equipment and gear, including fashionable snowboard clothing.

Today, it is one of the largest and best snowboarding clothing brands in the world, embraced by both beginners and professionals. An award-winning brand, known for its innovative graphics and cutting-edge technology, Burton delivers top-of-the-line snowboarding equipment and gear. Burton's boards often have a camber profile allowing for springiness and weight to be evenly distributed from the tip to the tail. Burton snowboards are world-renowned and they offer every type of board too, whether it's freestyle boards or split boards, Burton has you covered.
Shop Now 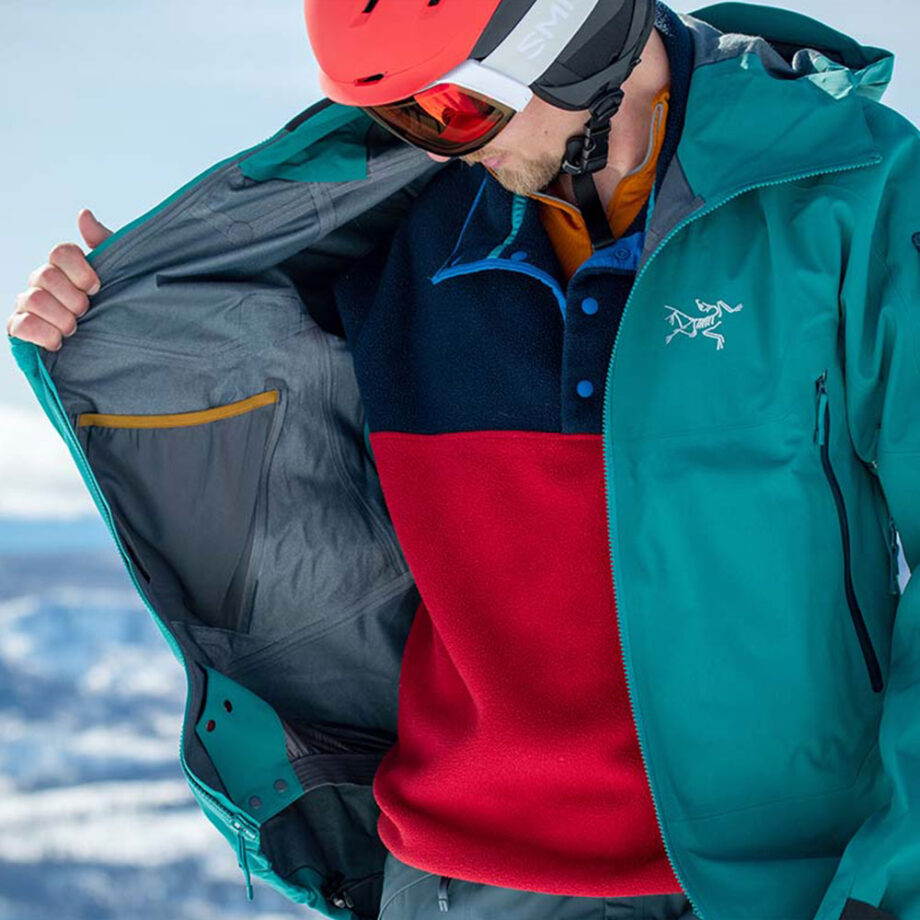 Arc’teryx was founded on the idea that “there is always a better way”. With the Coast Mountains serving as both inspiration and a testing ground to the brand, its gear will have you prepped for everything, from diverse climates, challenging weather conditions, to hiking up a big mountain. Being one of the only clothing manufacturers to have their independent manufacturing facilities, Arc’teryx treats its design centres like an engineering lab. You can't go wrong with Arc’teryx as it creates the finest, most efficient snowboarding clothing.
Shop Now 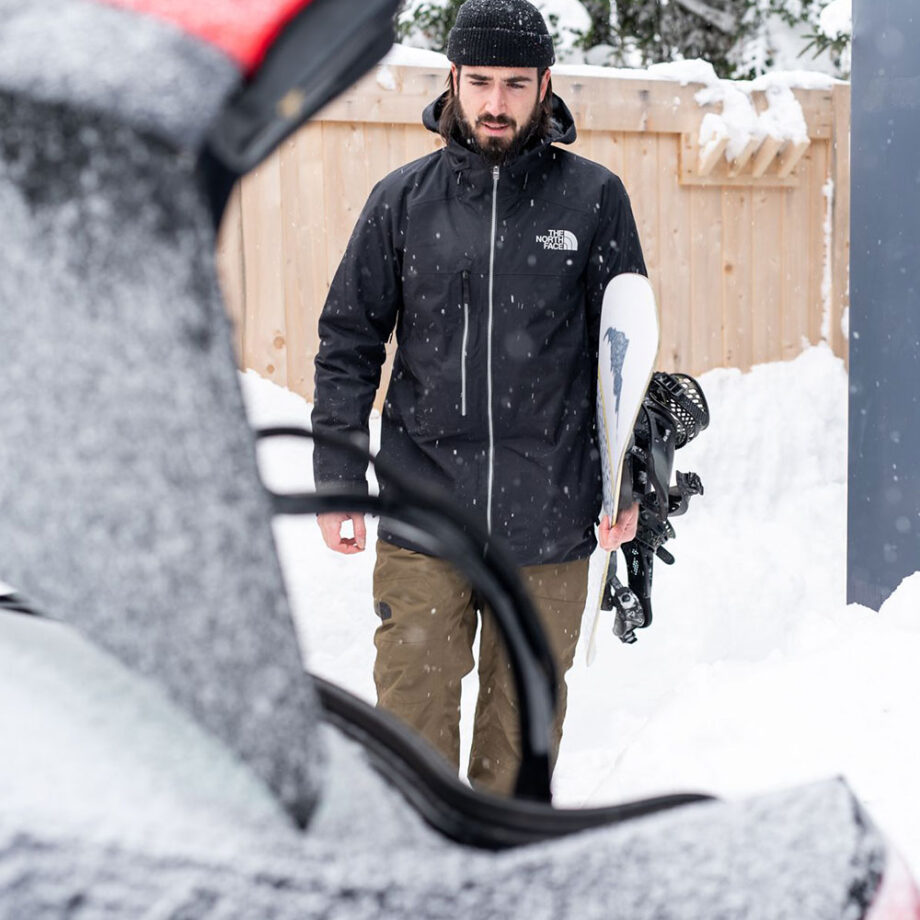 Named after the coldest, unforgiving side of the mountain, The North Face is a sure thing when searching for the world's best snowboarding brands. Everything from their outerwear, boots and bindings, sleeping bag, footwear, and accessories have insulating properties installed guaranteed to keep you warm in the coldest of winters.

However, what sets The North Face apart from other snowboarding clothing brands is its commitment to becoming environmentally friendly and improving animal welfare as many of its products are Responsible Down Standard certified. Animal lovers take note!
Shop Now 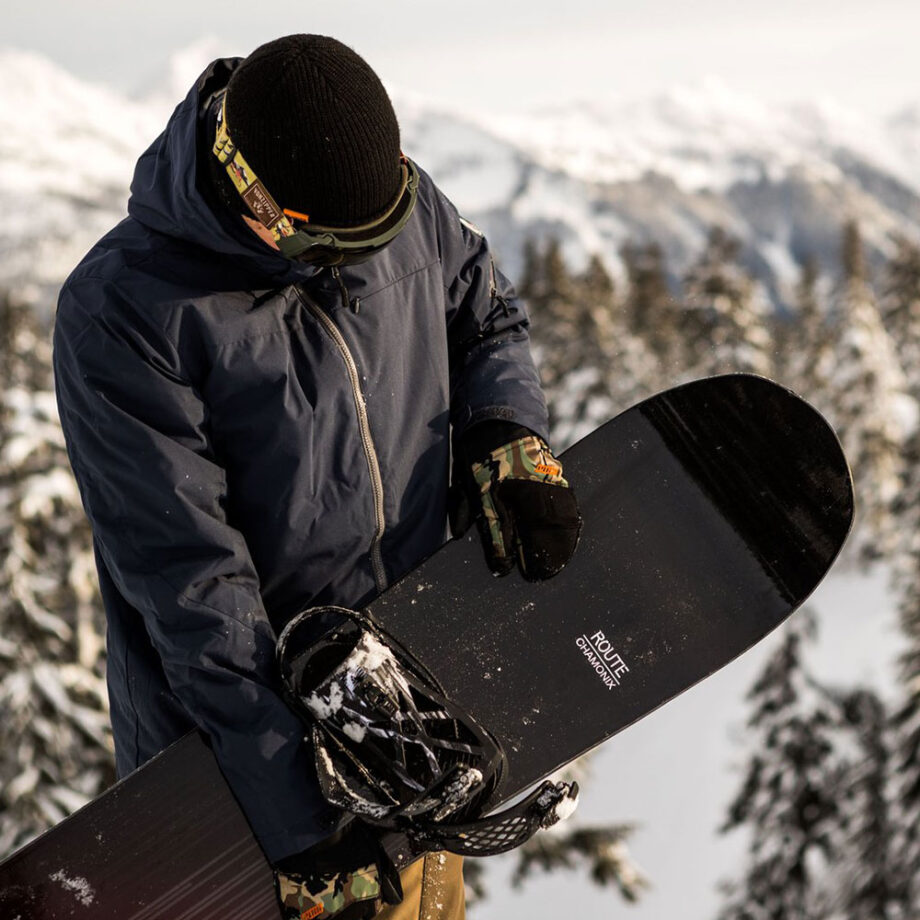 Chamonix is the intersection of great products and accessibility. Founded in 2017, Chamonix was built on the idea that great snow apparel should be available to the average man. Passionate about making the best snowboarding clothing and gear, Chamonix clothing will have you looking and feeling great. Their collections sell everything from vests, base layer tops and bottoms, boots, bindings, jackets, and pants.
Shop Now 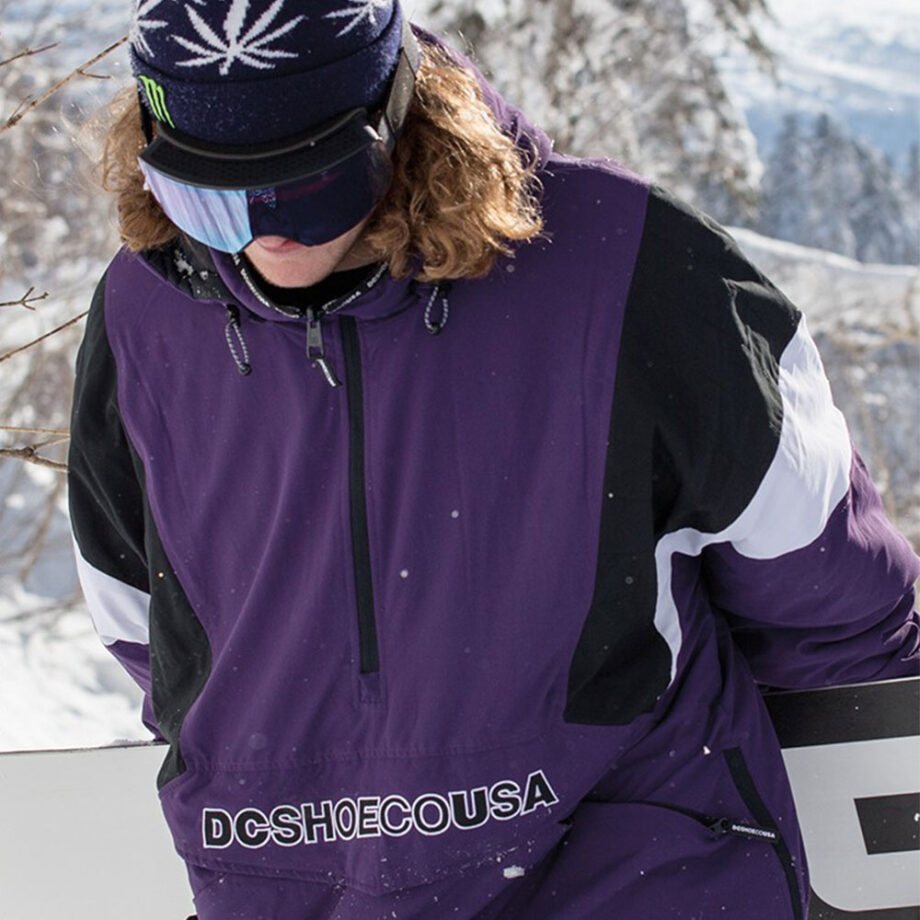 DC has been at the forefront of action sports since 1994 and they’ve continued to bring premium gear with high tech yet stylish designs. When it comes to DC, innovation is above all. Known for their comfortable snowboard boots, they’re sure to make you feel ultralight while providing extra grip, thanks to their 'Contact Unilite' outsole. Excellent for new riders as all gear makes you feel super comfortable while improving your skills on the slope.
Shop Now 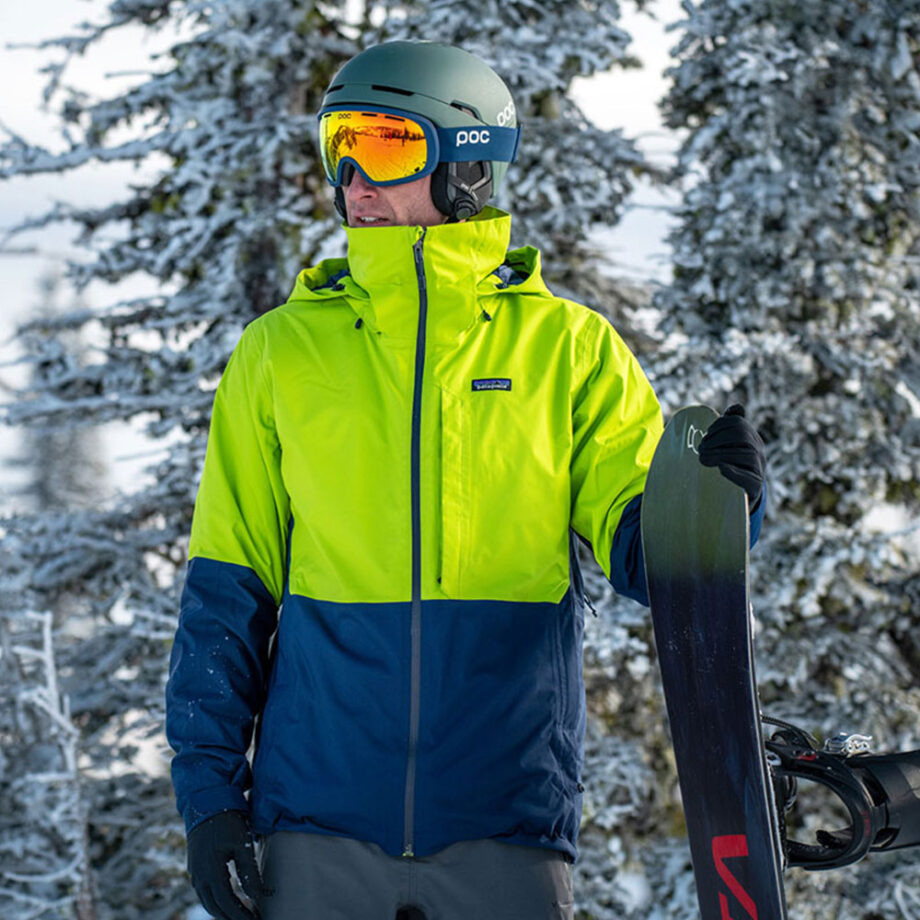 One of the more famous brands, Patagonia founded by Yvon Chouinard in 1973 and based in Ventura, California. A true innovator and highly recognised in the industry, Patagonia has hundreds of stores and factories in 16 countries. Creating some of the most impressive outdoor gear, Patagonia has you covered for every snow occasion. The Nano Puff is a customer favourite as it sustains heavy rain or dunking. More importantly, once it's wet, the Nano Puff dries super quick.
Shop Now 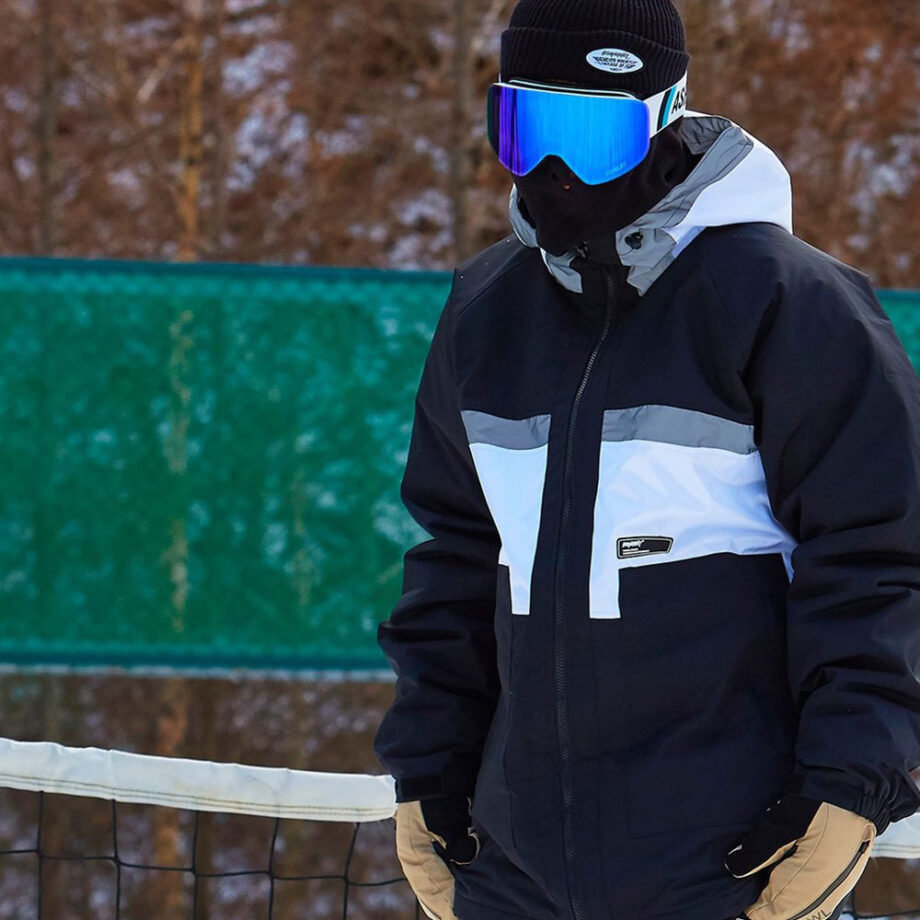 BSRabbit bears two rabbits of both snowboard and street style fashion which provide comforting daily life in the mountains but can also be worn casually in the street. Creating some of the coolest and unique snowboarding clothing, BSRabbit is at the centre of snow fashion as they aim to strive for a better future with positive mindsets.
Shop Now 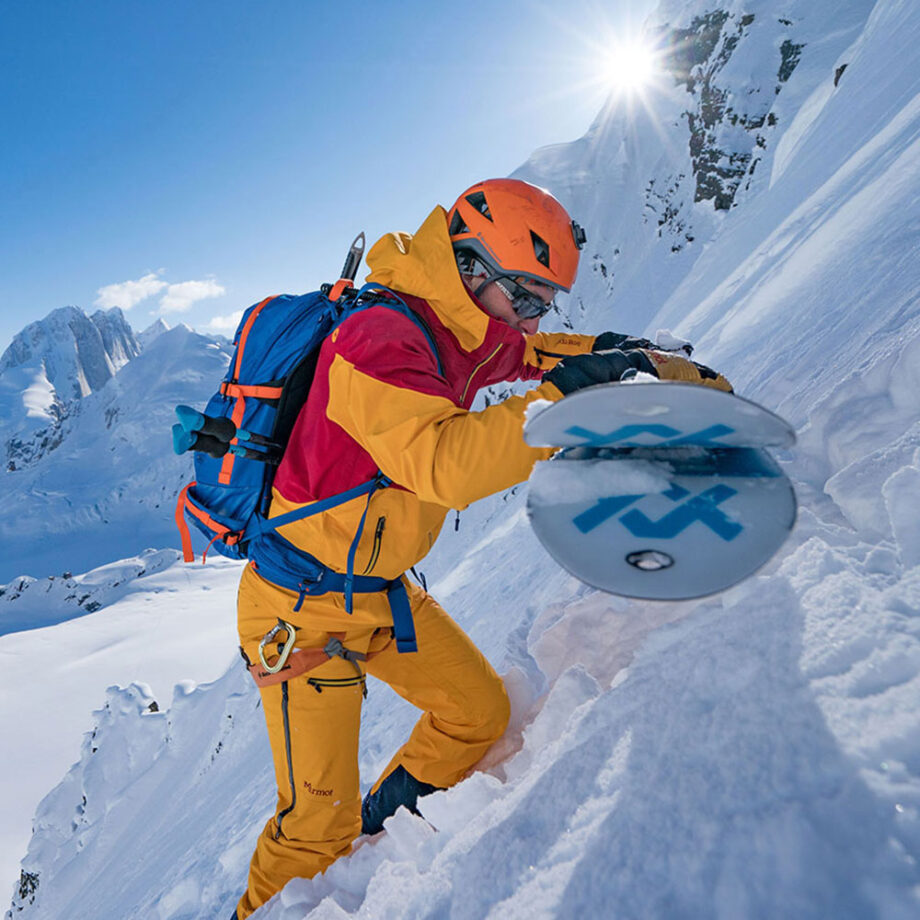 To avoid classes at U.C Santa Cruz, Marmot founders Eric Reynolds and Dave Huntley made parkas and sleeping bags in their dorm room and soon launched Marmot Mountain Works. Marmot incorporates high tech into their clothing and was even the first company to use Gore-Tex in snow gear. Now, they're getting on board with synthetic insulation, as their featherless jackets are scientifically engineered with 3M insulation, meaning you can have optimal warmth without being weighed down. Not to mention they have every type of snow jacket available, whether it's 3-in-1 jackets you're after or a softshell that's wind and water repellent. Marmont has it all!
Shop Now 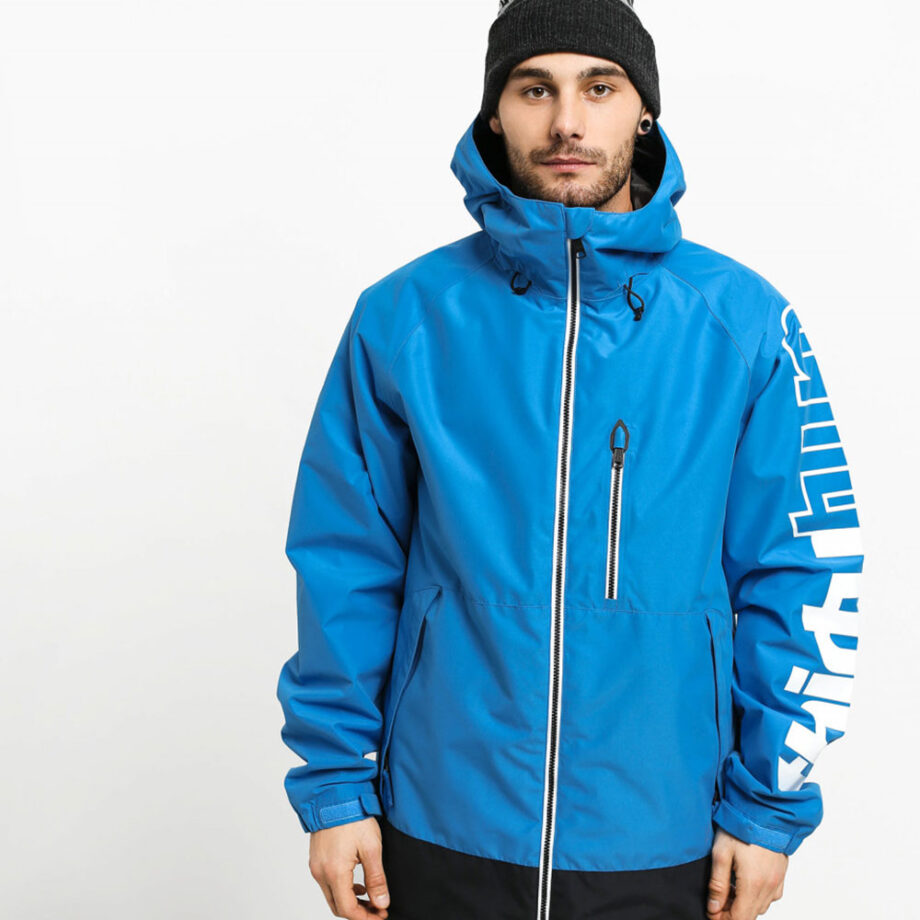 Founded in 1995, ThirtyTwo has become a benchmark in the industry. Created by snowboarders for snowboarders, ThirtyTwo has led the snowboard market with innovation in technology, performance, and commitment to sustainability. All ThirtyTwo snowboarding clothing and gear is trialled and tested by their all-star lineup of pro riders including JP Walker, Scott Stevens, and Chris Bradshaw. Plus, offering some of the world's best snowboard boots, ThirtyTwo's range will make you feel super comfy and ultralight.
Shop Now 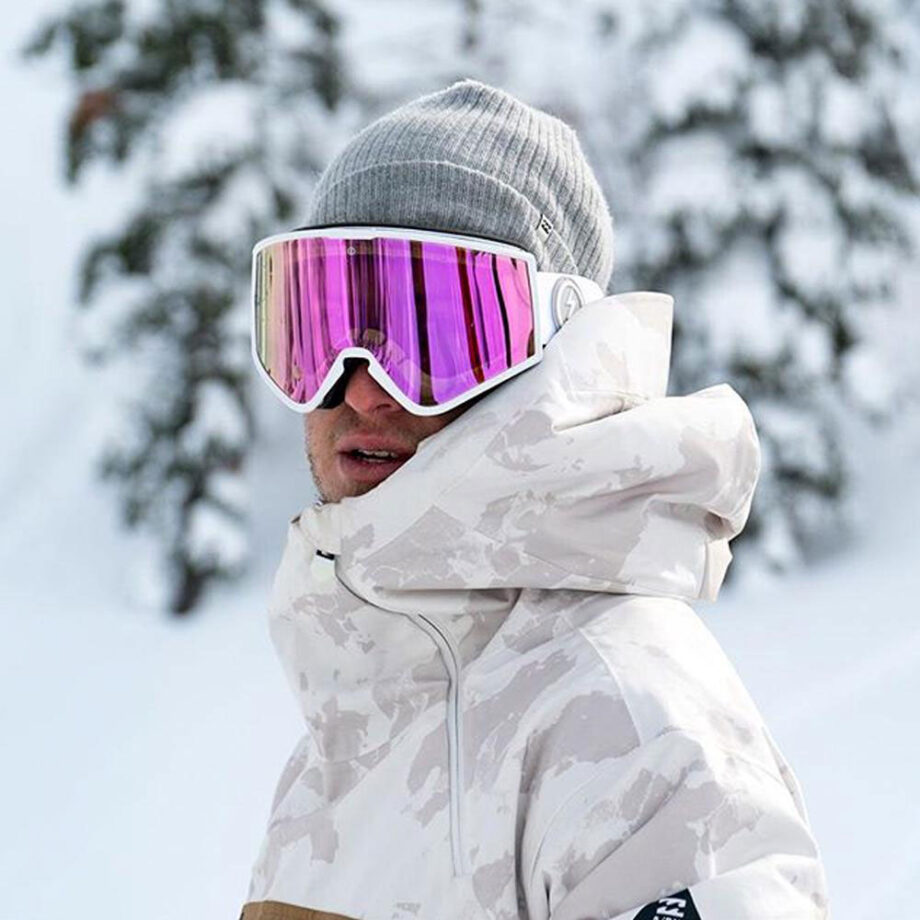 Electric has produced some of the most iconic ski goggles the snowboard industry has ever seen. Designed in California and made in Italy, Electric is inspired by Southern California’s rich music, art, surfing, and snowboarding scenes.

A trustworthy brand that lives by the words “more lens, less frame," their snowboarding goggles are made to improve performance as the egg features a toric lens that mimics the curve of the human head, providing peripheral vision and clarity while ensuring less distortion. Electric glasses and goggles are essential accessories this ski season.
Shop Now 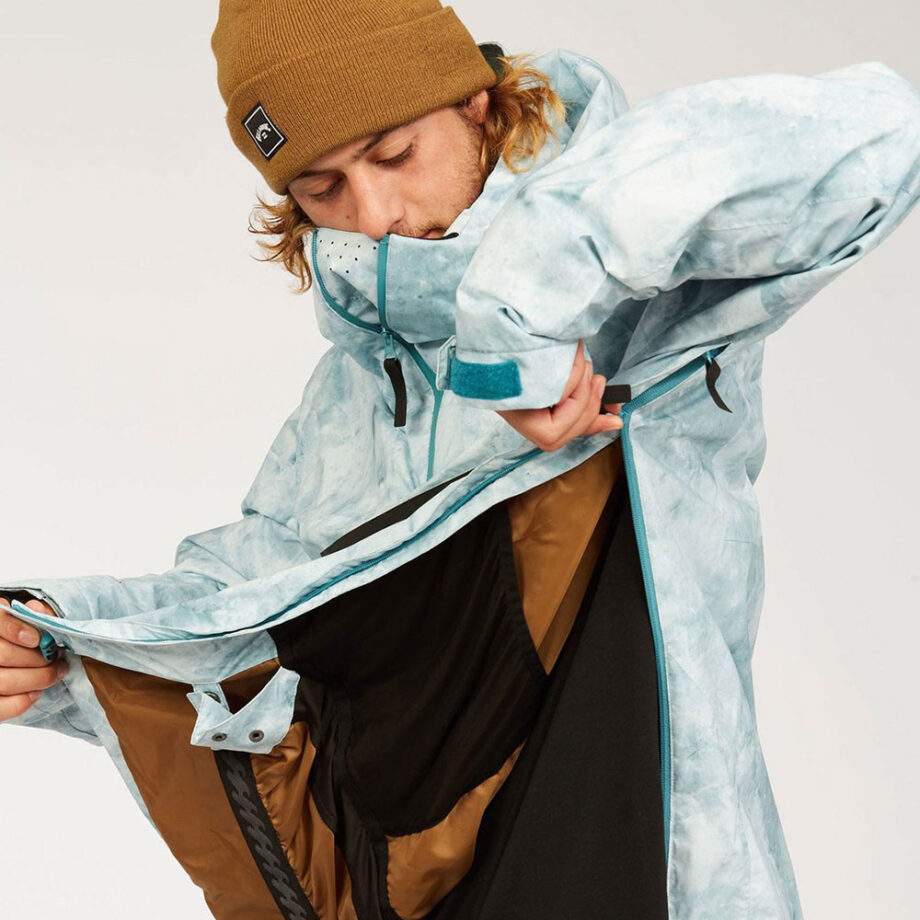 Founded in 1973 by Gordon and Rena Merchant, the name "billabong" is taken from the Aboriginal word bilabaŋ that refers to a "creek that runs only during the rainy season".

Billabong snowboarding clothing provides premium heat without making it bulky. Offering a diverse range of outerwear, the All Day 2L jacket is a favourite as it's guaranteed to elevate your winter wardrobe. Available in different colours, this snow jacket is designed to wear over layers and is suitable for a wide range of snow conditions.
Shop Now

The 14 Best Snowboard Helmets For Ultimate Style And Protection