Best Valet Trays For Men With More Cents Than Dollars 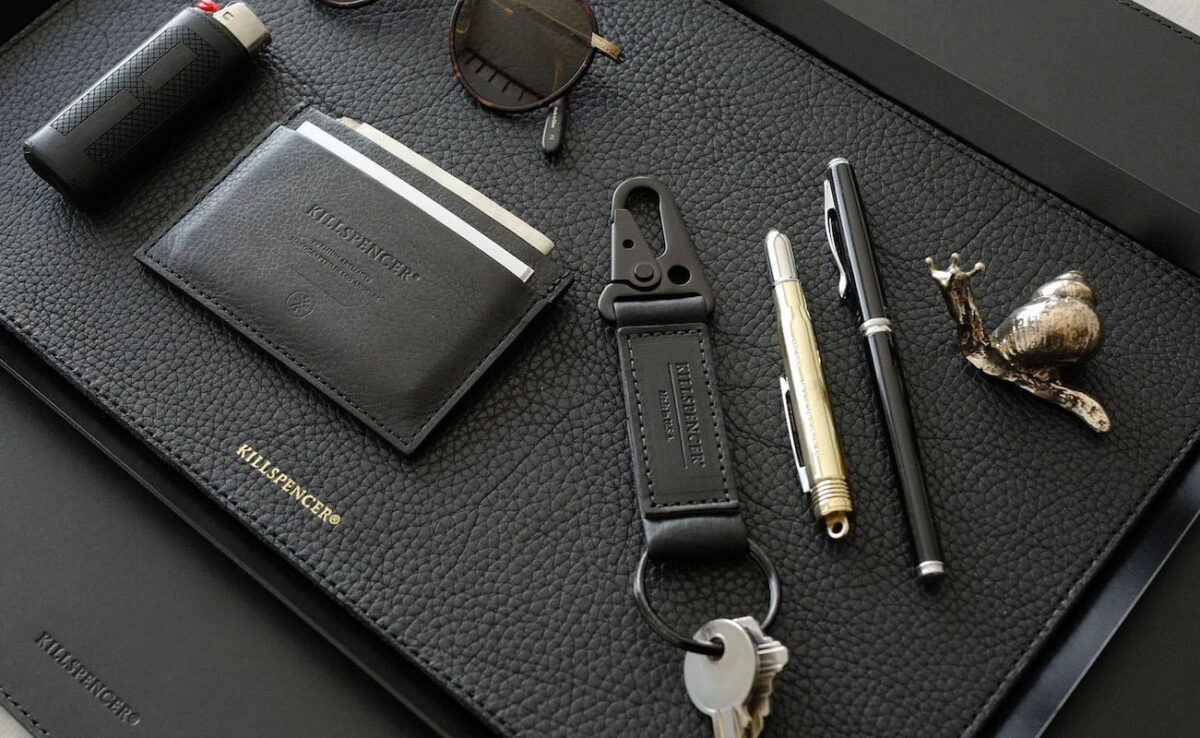 The valet tray takes its organisational traits from the clothes valet. Reaching back some 200 years, men with money and fine clothes had a clothes valet (a manservant of sorts) to organise their wardrobes and care for it when not being worn.

Valets also helped the aristocracy change throughout the day; moving from morning suits to cocktail attire to evening dinner party tails without a hitch (for a pop-culture reference think Lord Grantham and valet Bates from Downton Abby).

Nowadays, the valet’s been reduced to a neat place to store and organise your personal things. Designed more succinctly and smart, it’s followed menswear’s evolution into more pared back, quality wardrobe.

‘Where are my keys?’: a frustratingly familiar phrase, made all the more sickening when running late for work or a first date. Instead, maybe it’s your wallet that’s amiss? And, sure enough, you’re doing a mental-backtrack to where you used it last while padding down your trouser pockets.

So it’s time you bought a valet tray. A safe place for putting your Everyday Carry (EDC) – affordable wallet, keys et al. – the valet tray will put an end to unnecessary leaving-the-house frenzy. Plus, the best valet trays are designed so luxuriously, they double as interior art, adding some depth and texture to a boring benchtop or bedside table.

So, stop scattering your pocket change and keys all over the house and invest in a high-quality valet tray 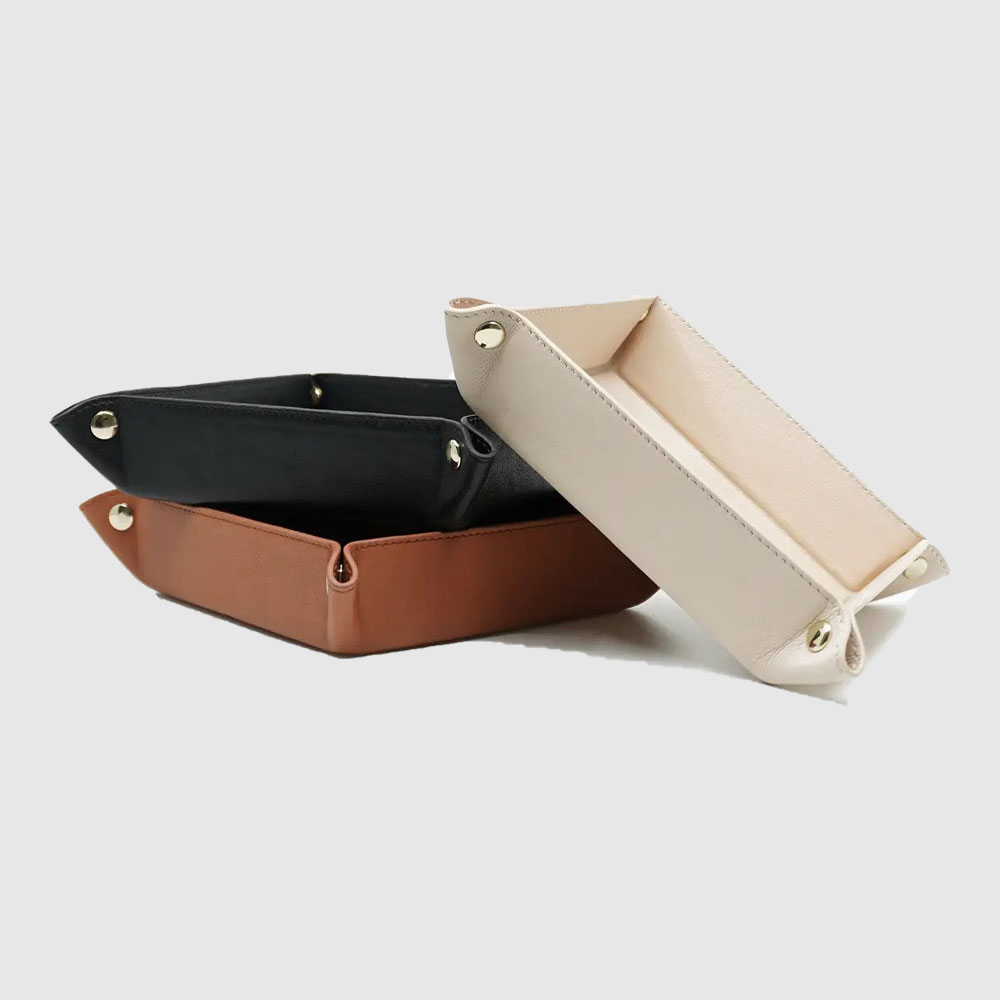 San Francisco-based label Quince recently burst onto the scene with an incredible range of clothing for men and women that proves quality can be affordable. Not one to just stick to clothing, however, Quince has diversified into leather goods, including valet trays. The company has just one in its line-up, but it's available in a few colour options and made from quality full-grain leather. Simple, effective and above all, affordable.
Shop Now 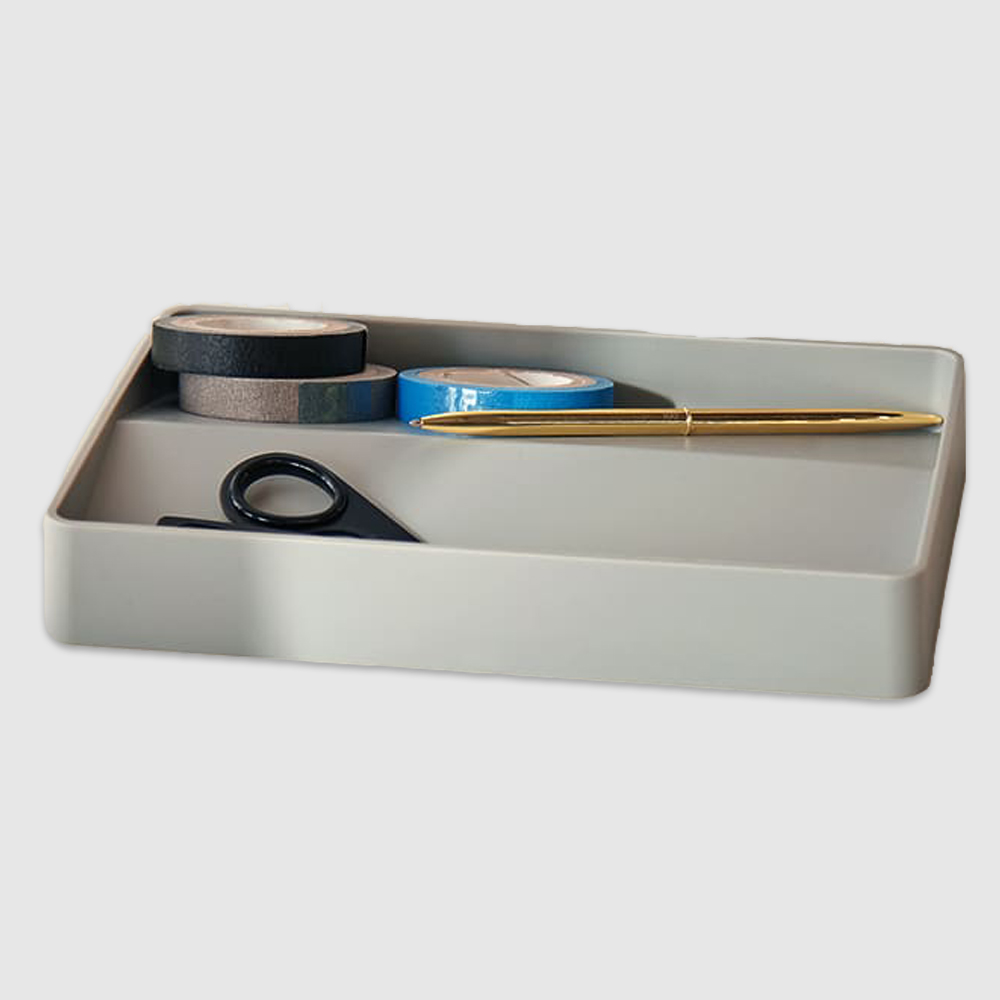 HAY is a Danish design company founded in 2002 that makes high-quality products designed to make the lives of everyone that little bit easier.

The company's medium split tray presents the conventional valet tray in an entirely new way. Rather than settle for the standard flat design, it rocks a two-sided shape, so you could effectively keep your sharp, scratchy keys away from your watch, for example.
Shop Now 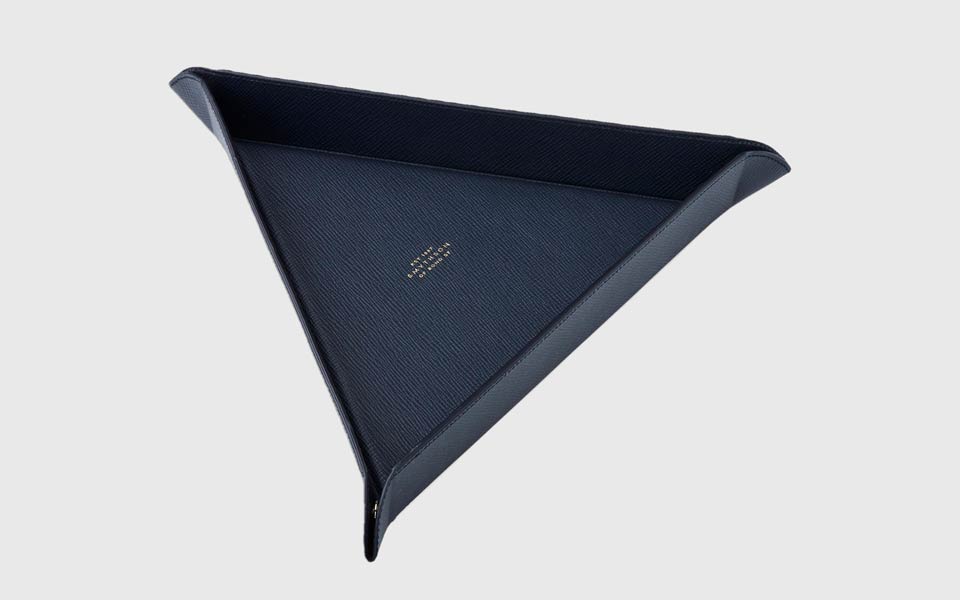 British luxury goods brand Smythson has been kitting out the social elite since the 1800s. The official supplier of stationery for Queen Victoria and a brand favoured by the likes of Grace Kelly, Smythson has remained exclusive and premium ever since.

This Panama Trinket Tray is made from genuine crossgrain calf leather, is available in a few colours and can be folded flat thanks to popper fasteners in the corners.
Shop Now 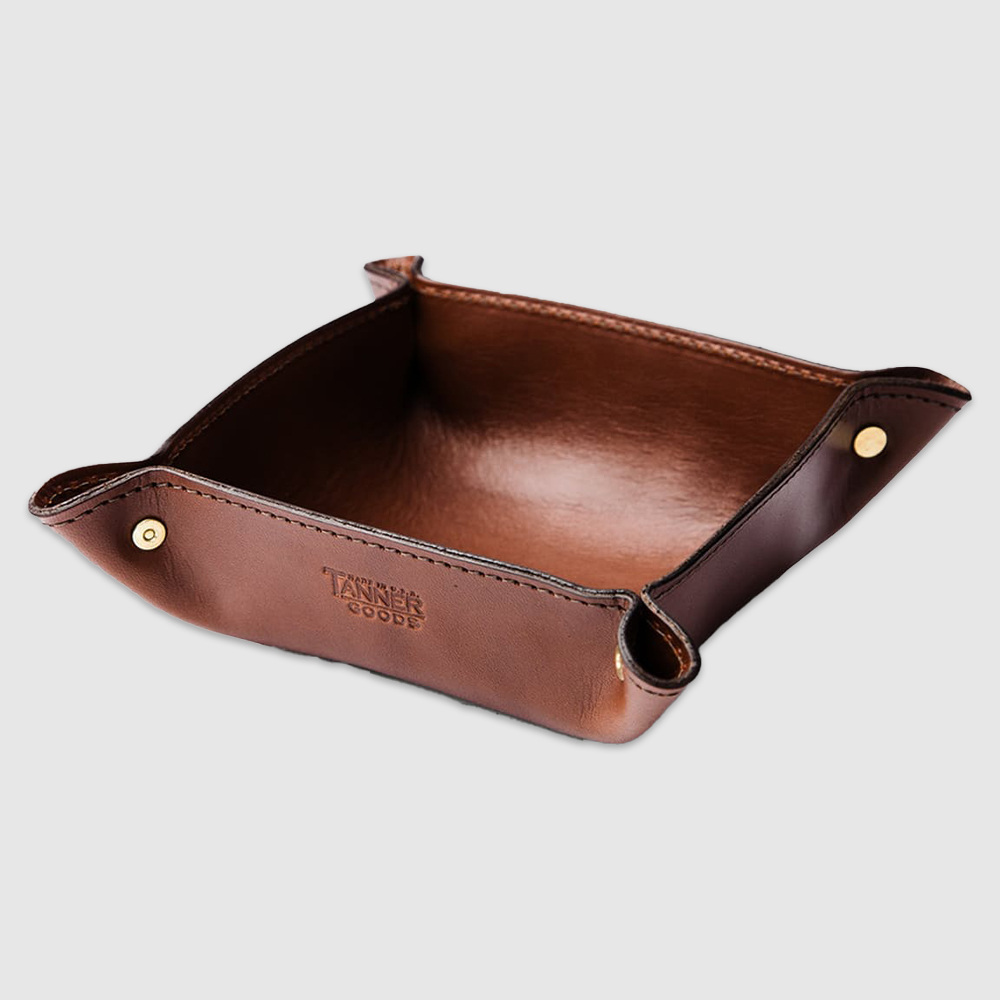 Tanner Goods operates out of Portland, Oregon and makes everything on its roster by hand. Products are produced in limited numbers, and are designed to last a lifetime, with its leathers in particular responding well to the ageing process.

The aptly named Valet Try is made from 3oz Meridian English bridle leather and hand sewn, before having Portland-made brass rivets placed on each corner. It may not gobble up the entire contents of your pockets, but for the real essentials, it'll cradle them with love.
Shop Now 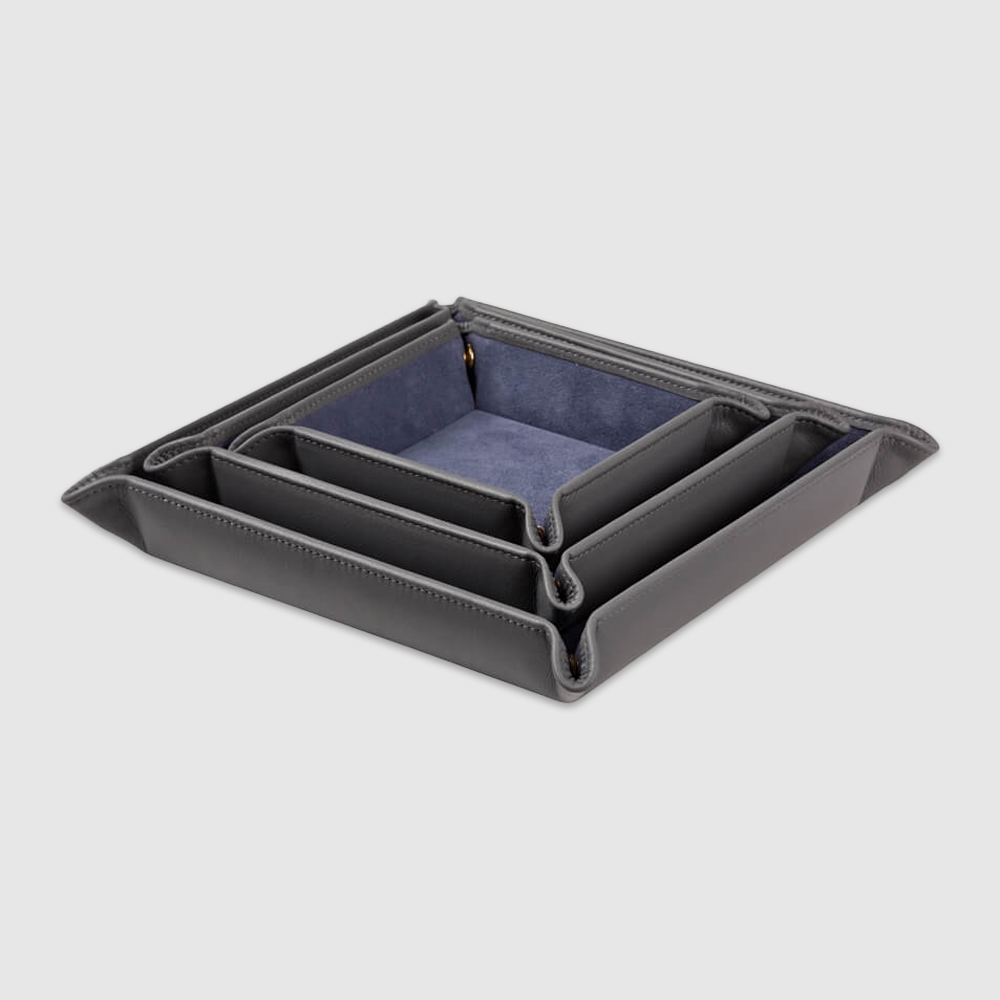 Stow is a travel brand that hails from England, more specifically, Hertfordshire. Founded in 2013, it continues to made predominantly handmade leather accessories (in Spain), all designed to make travelling that little bit easier for you.

Understanding that modern-day gents could have a varied selection of EDC to keep close by, Stow has designed a three-set of valet trays. Made from a combination of calf leather and Italian goat suede, all three valet trays offer your gear a luxurious bed to lie on.
Shop Now 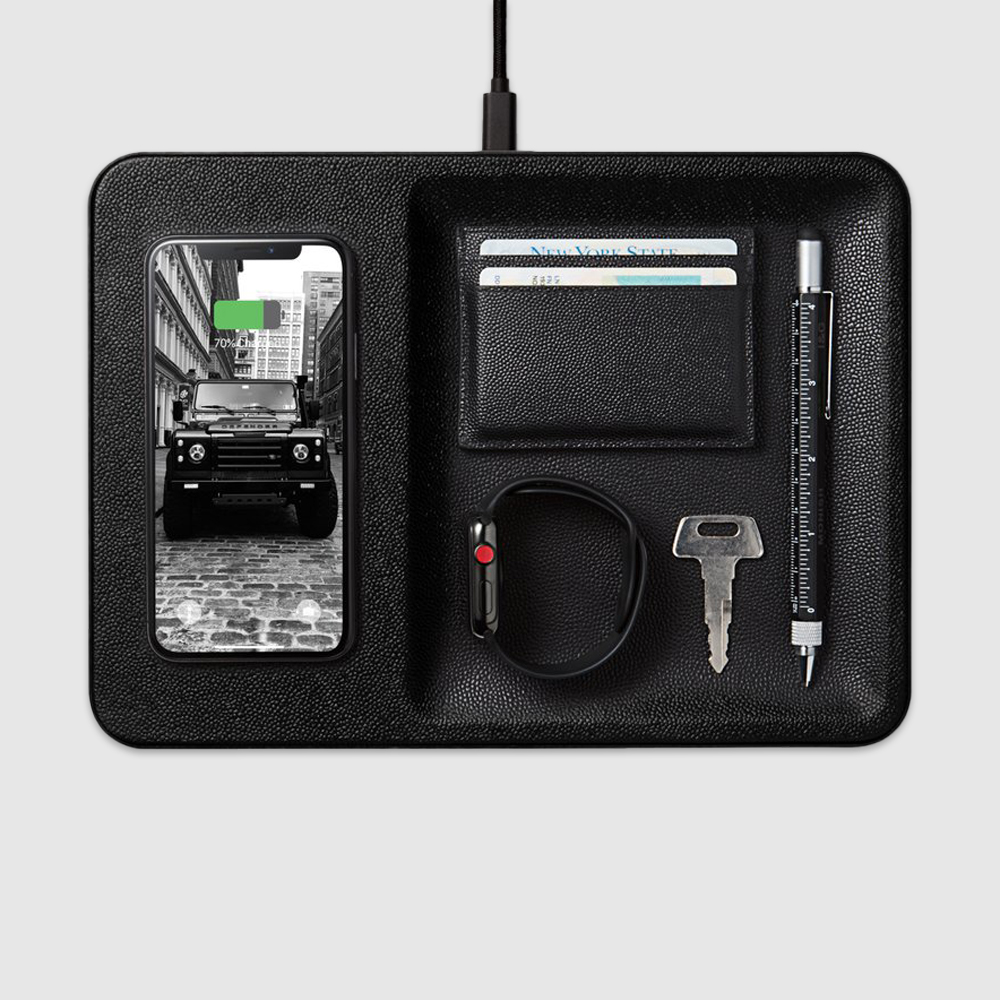 Courant is an American company that specialises in producing leather-wrapped wireless chargers for your smartphone. However, understanding that people have more than just their phone to carry around, has integrated it with valet tray options.

Case in point is the Catch:3, a wireless charger on one side and a valet tray on the other, giving you plenty of space to leave your keys and any other paraphenalia.
Shop Now 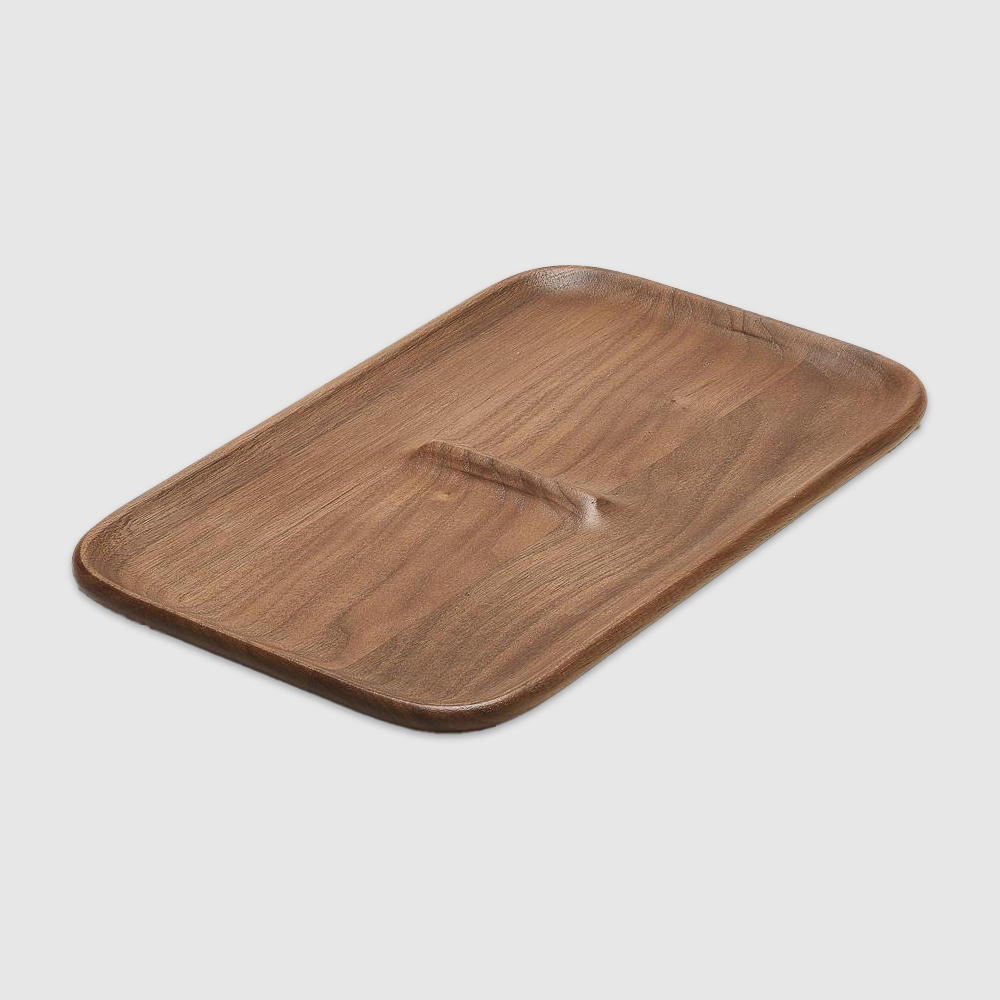 Craighill is another company to hail from New York City, with a strong focus on design and creating objects that will not only enrich the lives of those who buy them, but ones that will last for years too.

The Catch valet tray is made from solid American hardwood and available in maple or walnut. It's received a smooth satin finish, and offers something a little different to the vast quantities of leather featured on this list.
Shop Now 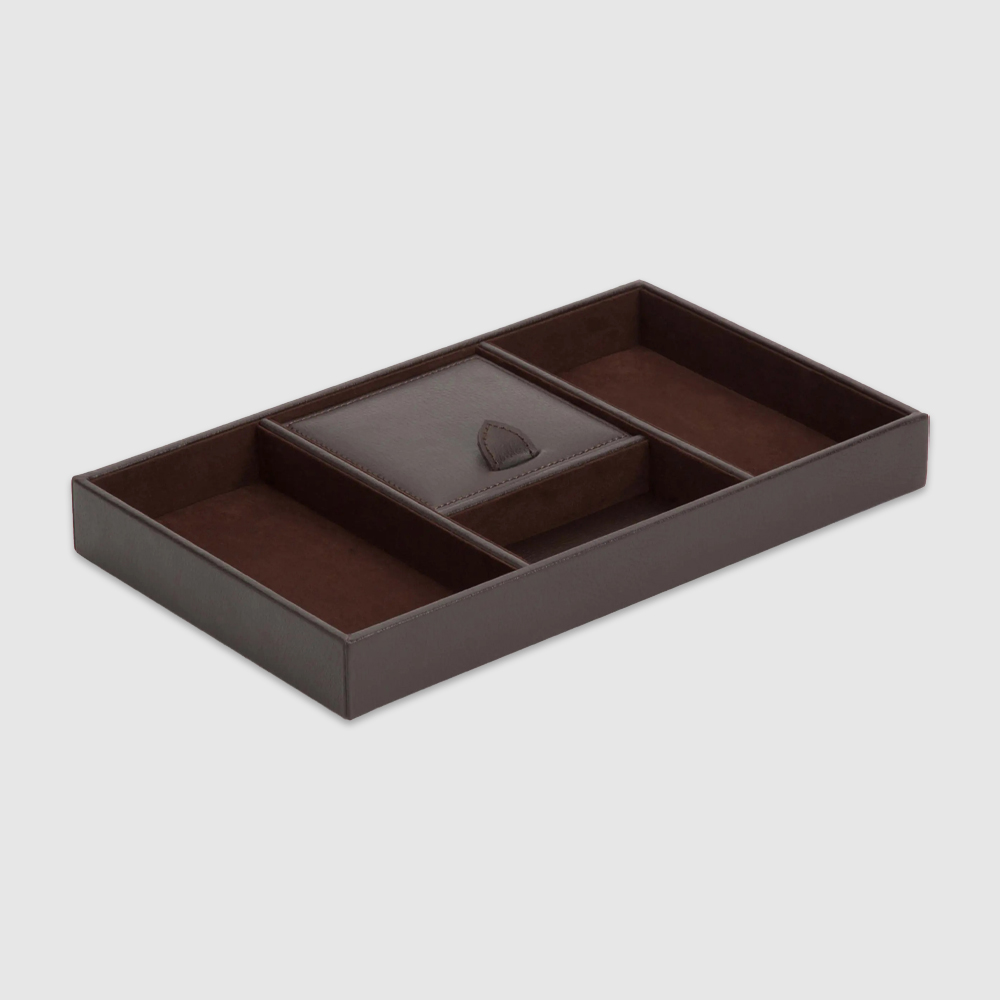 WOLF was founded way back in 1834 when owner, Philip Wolf I, found that the boxes he made to present his silverware in became more popular than the silver itself. He turned his attention to jewellery cases and in the years since, the company has consistently honed its craft, implementing new techniques along the way.

The Blake valet tray offers plenty of space to store all your belongings, whether it be your phone, watch, keys or spare change. You're presented with three open storage compartments and one with a lid, with the whole tray made from a combination of leather and suede.
Shop Now 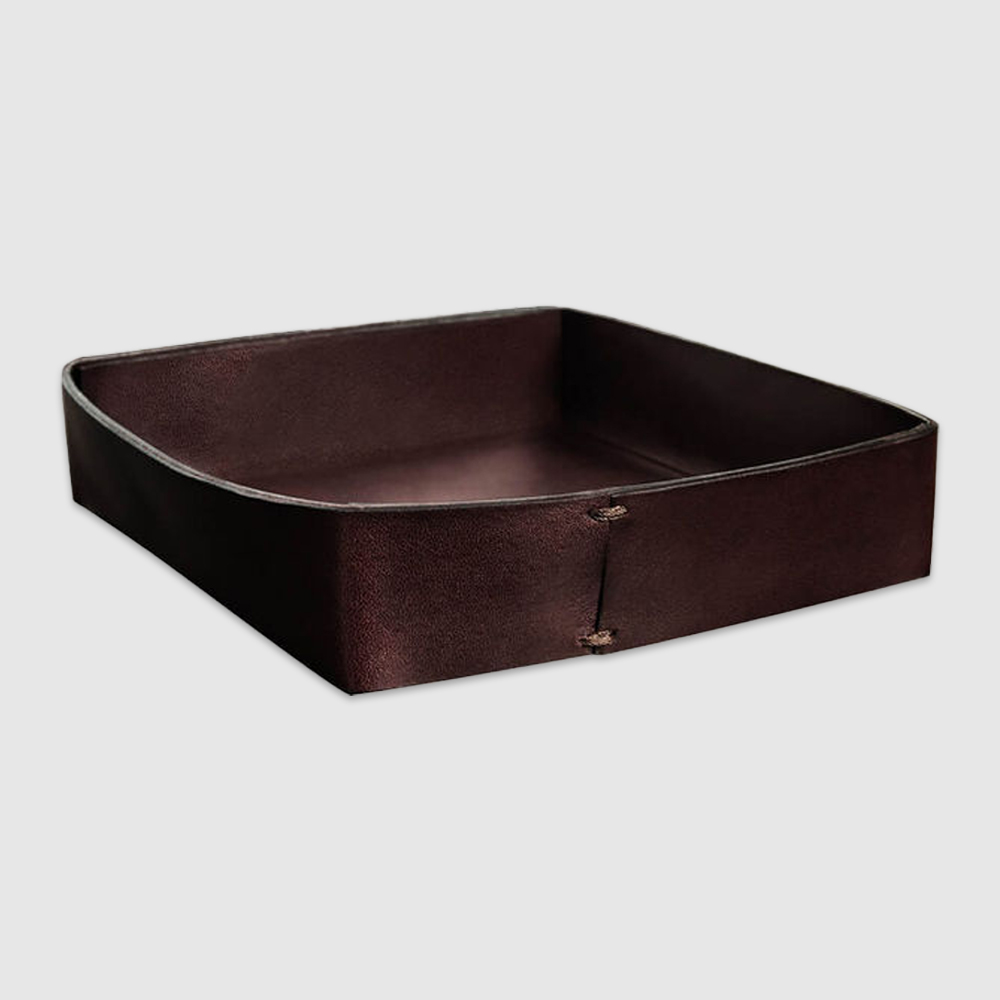 Carl Friedrick is another English brand committed to making a premium collection of leather accessories. Leathers used to make its bags, wallets and accessories are sourced from all around the world, but all are required to meet strict quality criteria.

This chocolate valet tray is made from Vanchetta leather, vegetable-tanned by Artigiano Del Cuoio in Tuscany, Italy. Minimalistic in its design approach, this valet tray will blend in to any environment.
Shop Now 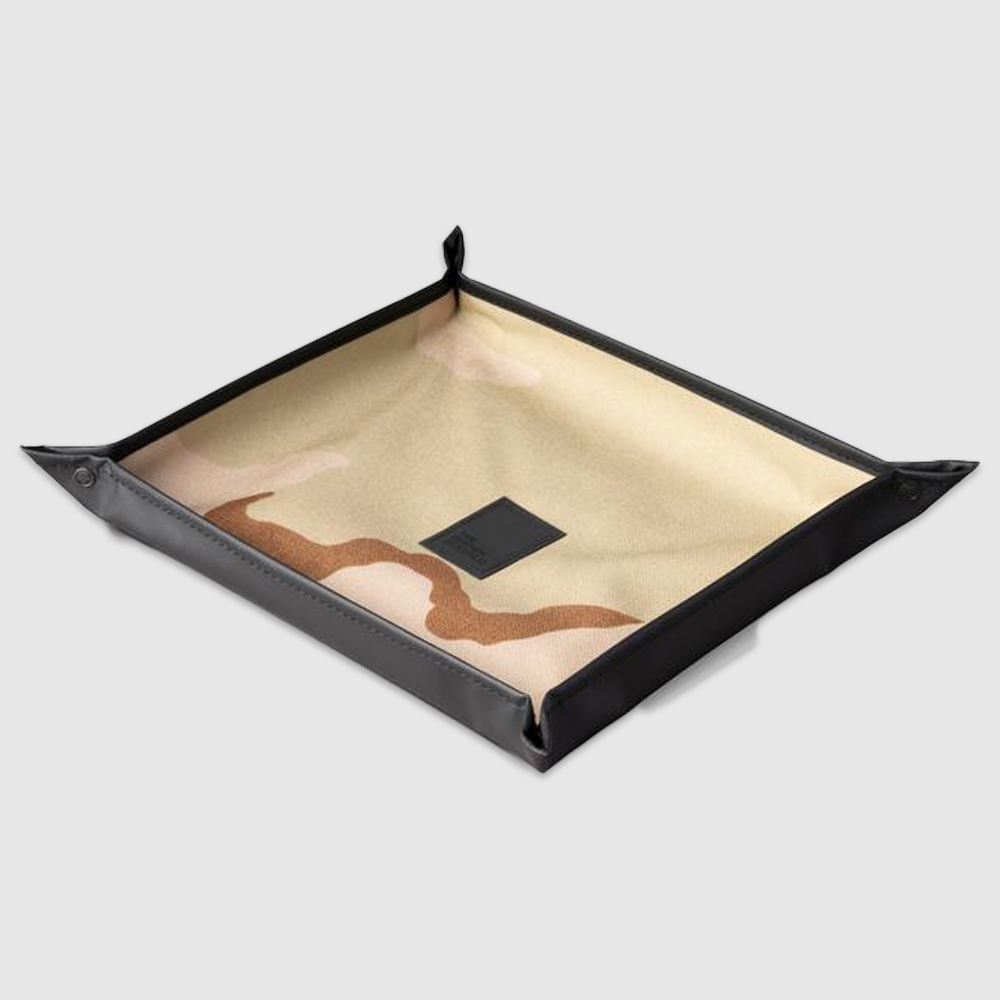 California-based design and manufacturing company The Brown Buffalo was founded with a purpose of supplying consumers with backpacks and accessories built for a specific purpose. Those purposes require the use of heavy-duty materials – that it makes itself – that can comfortably undergo rigorous testing.

The Brown Buffalo's valet tray range isn't huge, but it doesn't need to be, as the XL tray (available in three finishes) is made from a tough-as-nails nylon, that also happens to be waterproof. It's sewn together in California too, so you can rest easy knowing you're getting something of true quality.
Shop Now 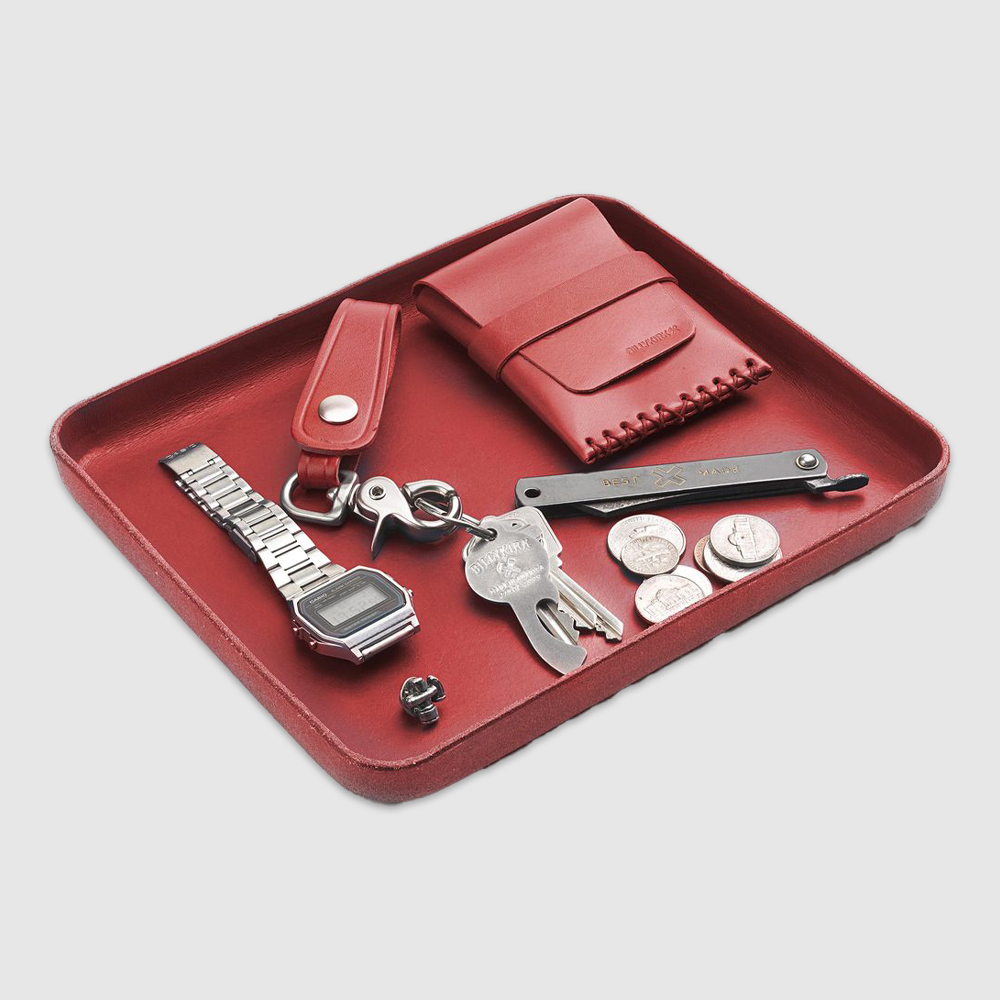 Billykirk is an American bag and accessories brand founded by two brothers in 1999. With 20 years experience under its belt, it's fair to say the company knows how to put together a well-finished valet tray, and you certainly won't be disappointed by the selection in store.

If you've got a good chunk of stuff that you want to make sure you don't lose sight of, then the No. 471 large leather valet tray is for you. Available in a choice of colours, this tray is made from full-grain vegetable tanned leather.
Shop Now