The Classiest Whiskey Glasses For Sipping Your Finest Single Malt 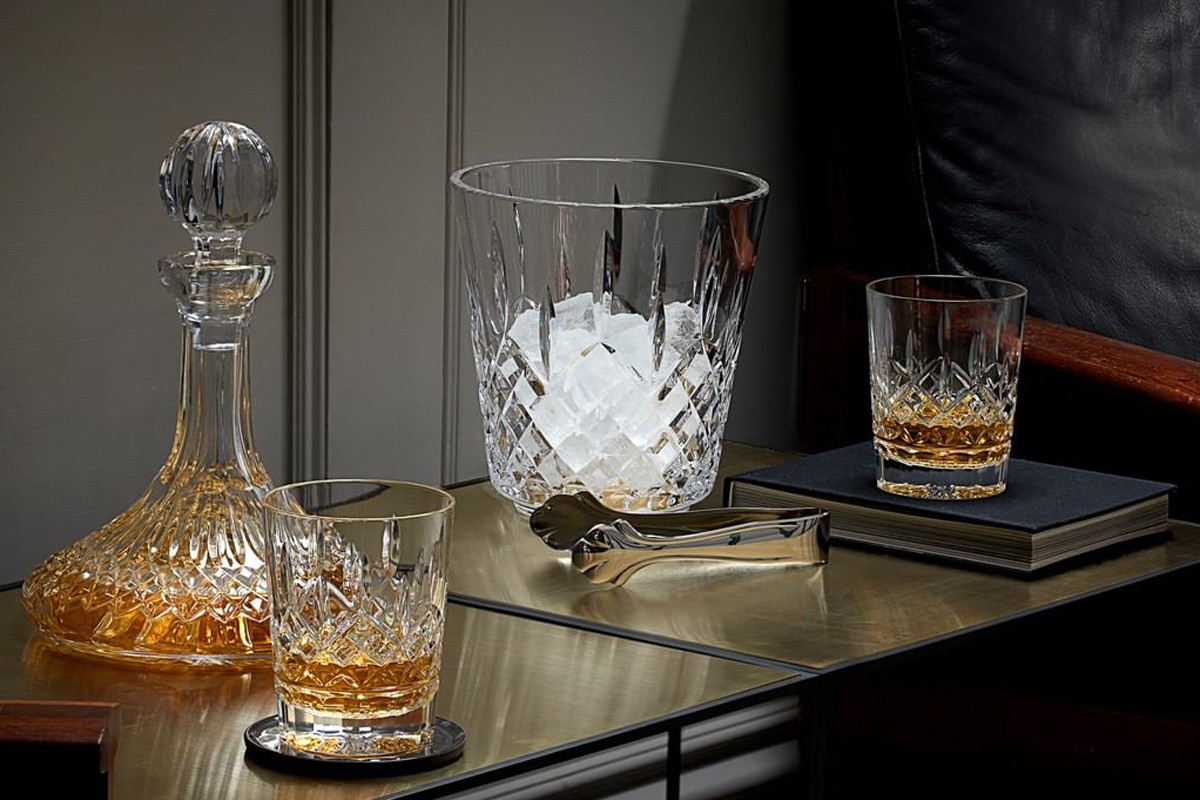 Drinking whiskey (or whisky, if you’re not American) like the magnificent bastard you are is an art that needs to be enjoyed. Not only is there a whole world of whiskey to learn about, with several countries around the world producing bottles with their own unique tastes and textures, but just being able to relax in a chair (an Eames, ideally), savour the taste and enjoy a cigar or two is every gentleman’s idea of paradise.

But the whole look can be ruined if you drink your whiskey from the wrong glass. Yes, when it comes to drinking the oesophagus-burning good stuff, there are distinct right and wrongs with regards to glassware. You can’t simply reach for any old tumbler in your cupboard. Instead, you need a proper whiskey glass. Don’t argue with us.

When shopping for whiskey glasses, you’ll likely come across the terms old fashioned and double old fashioned. The naming comes from the classic whiskey-based cocktail, but with regards to the ‘double’ prefix, this type of glass is usually two ounces (60ml) larger than its single rocks glass sibling.

The larger size lends it to be better suited to cocktails with ice, whereas the single rocks glass is what you want when you’re sipping on a neat pour. It’s not wrong per se to drink a neat pour from a double glass, it will just look slightly out of proportion.

However, there are also other whisky glass variations, with official titles, that have their own respective properties. Old fashioned tumblers have a wider opening at the top, which whiskey boffins claim doesn’t focus the aromas of the spirit so well.

In order for your sense of smell to be truly satisfied, you should be looking for glasses such as the Glencairn, developed by Glencairn Crystal in Scotland, UK. The Glencairn glass fuses together the best of everything in whiskey glassware, with a heavy bottom akin to the old fashioned rocks glass, with a curved upper to focus the aromas, similar to a nosing copitas glass.

And when you’re spending good money on a bottle, you shouldn’t settle for some cheap-ass glassware either, but something that is just as much a piece of art that can be displayed through a glass-fronted cabinet, as it is a functional glass.

What is a whiskey snifter?

A snifter is commonly used for consumption of dark, aged spirits like brandy, whiskey and bourbon. It is a short-stemmed glass with a wide bottom and narrow top.

Do whiskey glasses make a difference?

Definitely. Whiskey glasses are shaped to enhance your drinking experience. They should influence the smell and taste you perceive, concentrate vapors and allow you to “nose” the whiskey.

How much whiskey do you pour in a glass?

A standard whisky is 1.5 ounces for a shot. For a near or rocks pour, it should be two ounces. For double, its three ounces.

Here are some of the best whiskey glasses for whiskey worshippers. 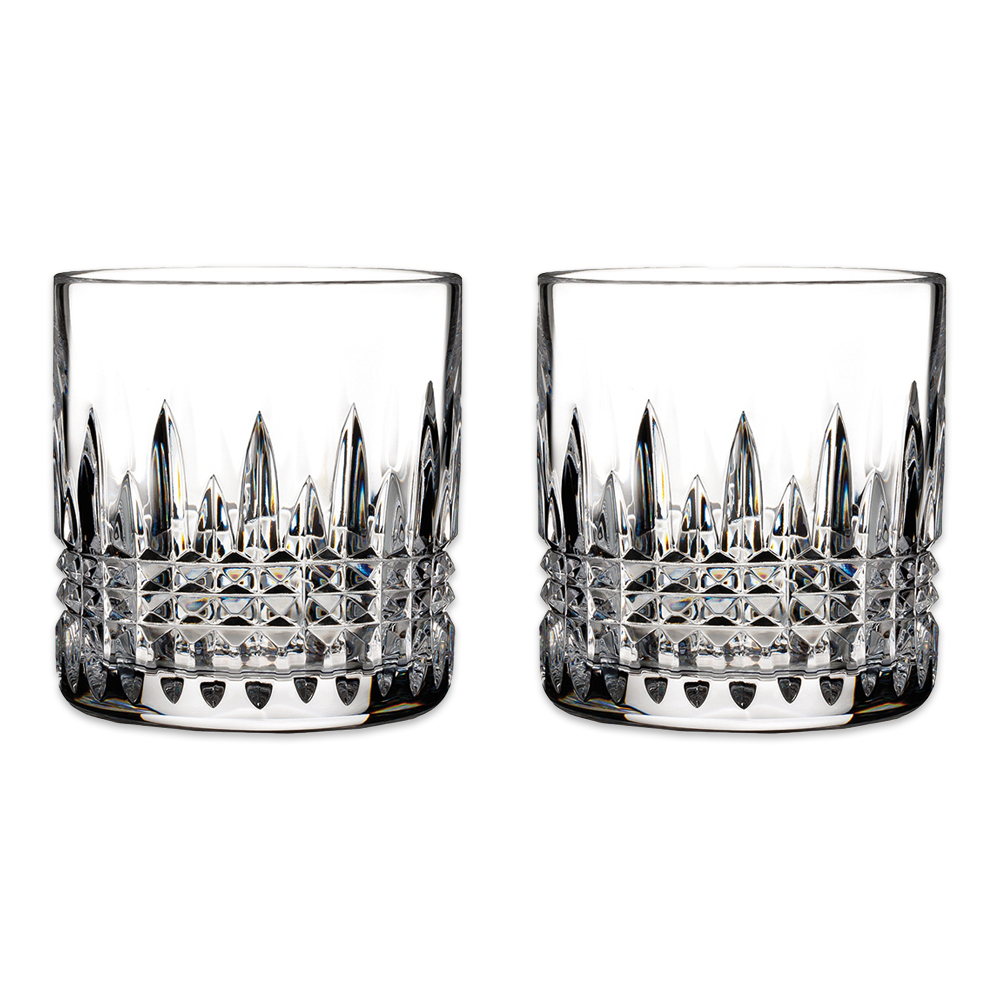 1 of 8
Waterford
Waterford is an Irish maker of crystal and glassware. Named after its home city and founded in 1783 (but closed for 100 years in 1851) the company certainly knows how to make a fine whiskey glass.

A large portion of Waterford's range are the double old fashioned style, but this duo of Lismore Connoisseur Diamond glasses are large enough to hold whiskey-based cocktails, ice or whiskey with a splash of water, but not so large that a neat pour will look out of place. They're hand-crafted from "the finest crystal" and have some real heft to them making them feel all the more substantial.
Shop Now 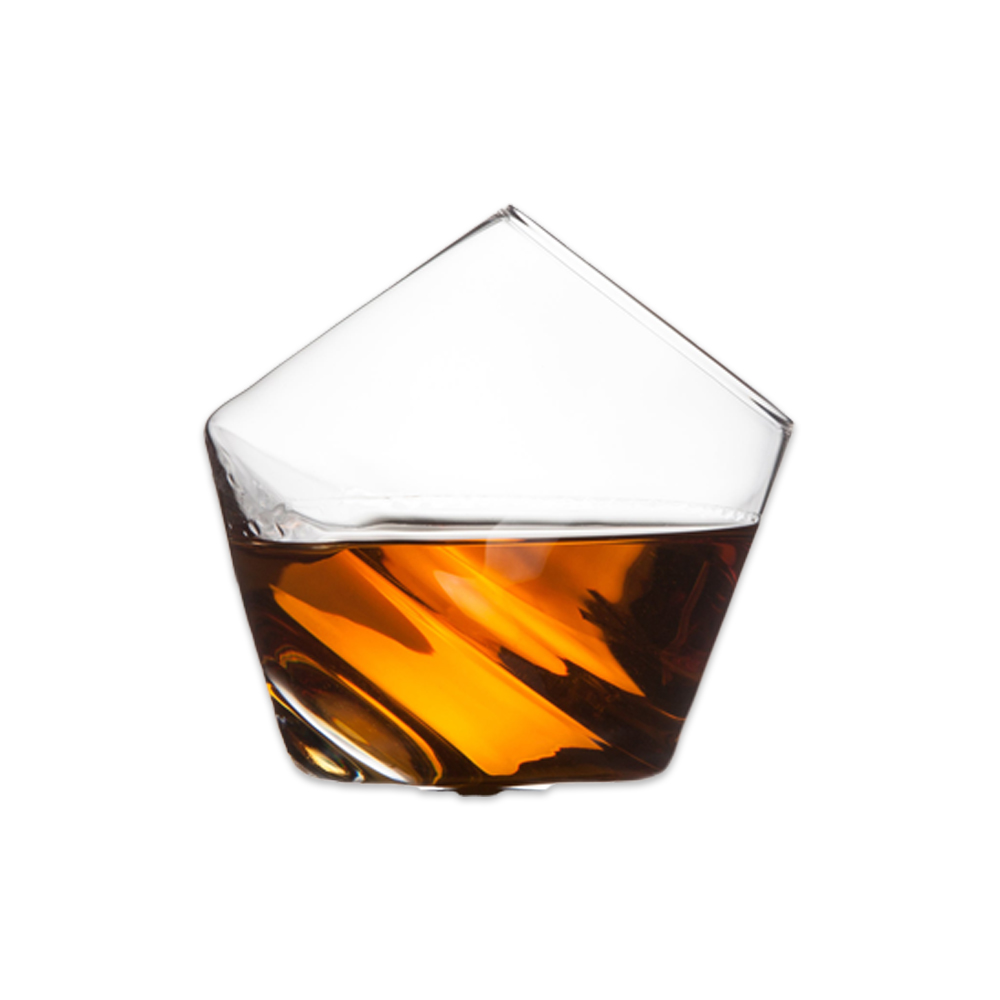 2 of 8
Sempli
Los Angeles-based glassware company Sempli is very much a design--focused brand. After all, why settle for run-of-the-mill glasses when you could have something functional yet elegant. That's exactly Sempli's mission, with founded Daniele Semeraro drawing on his dual-citizenship of Italy and Sweden.

The Cupa Rocks glasses are designed and produced to fit perfectly in the hand, allowing you to swirl your whiskey to release its aromas with ease. The edge upon which the glass can lean on provides a perfect 2oz/60ml pour, so no need for a jigger or other measuring device, and they're hand-blown in Florenc,e, Italy. Simply stunning.
Shop Now 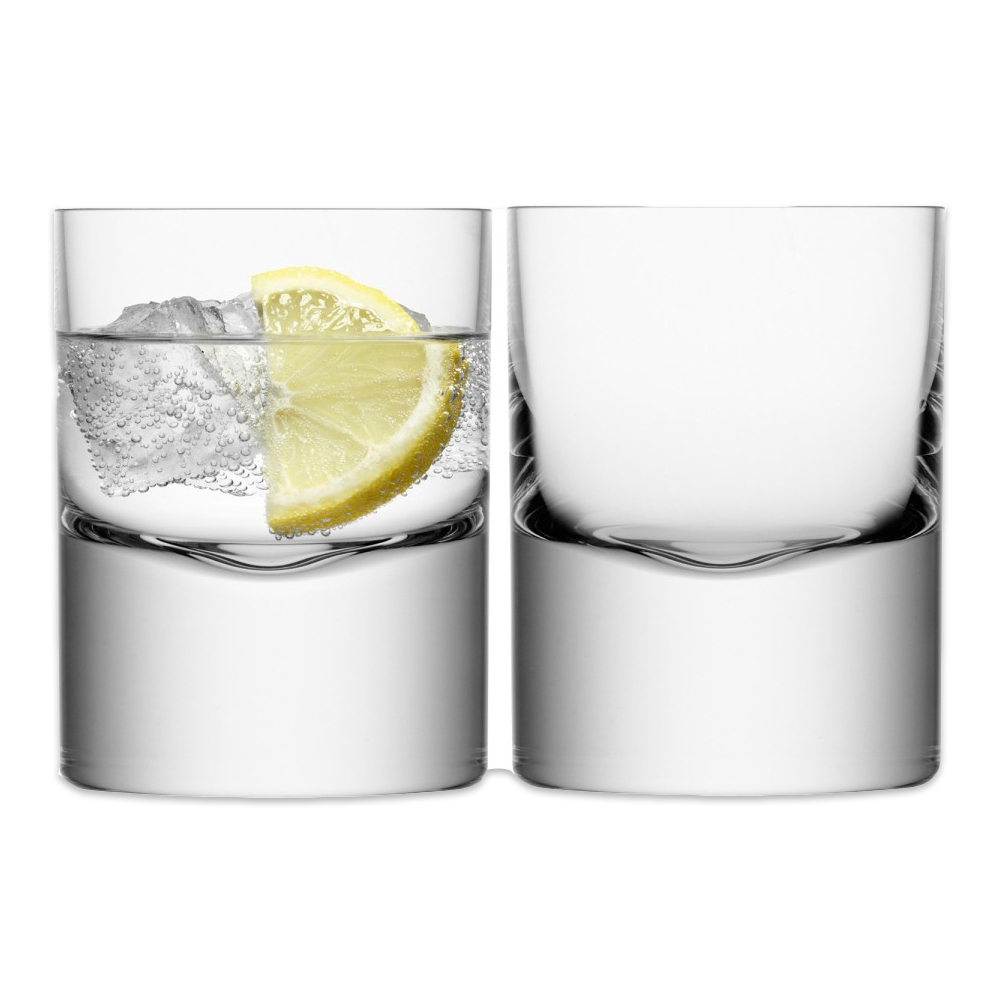 3 of 8
LSA International
LSA International is a brand founded in London over 50 years ago by Polish man Janusz Lubkowski. Seizing the opportunity to infiltrate London with not just mouthblown glassware, but products from other materials such as natural wood and leather, LSA quickly found a loyal audience. The company is run today by his daughter, who continues to adjust the stylings of its products with each season. The same craftsmanship and quality remains though.

The Boris tumblr, bought as a pair, have a 250ml volume, putting them bang in the middle of the ideal size for a single rocks glass. The nature of the design means they have a base with some real heft, which only adds to their appeal. You don't want something flimsy that feels like it could break at any second, do you?
Shop Now 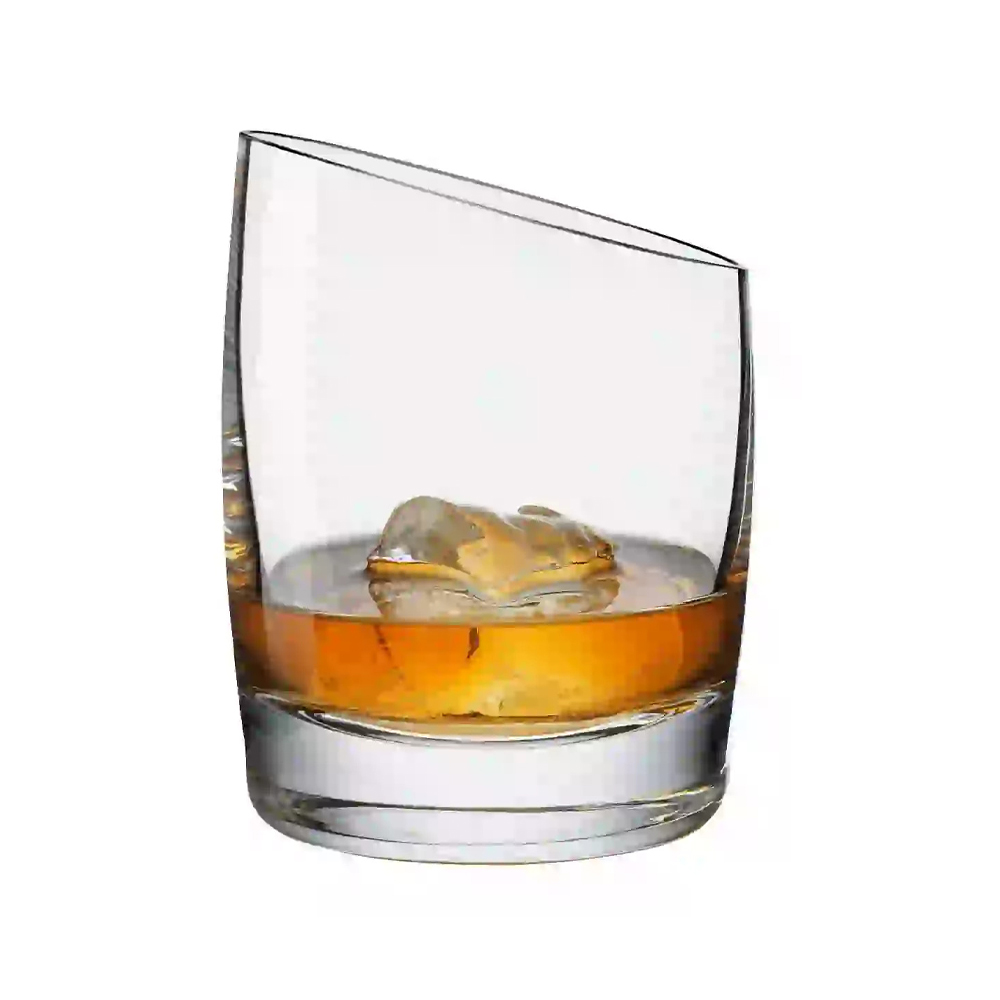 4 of 8
Iittala
Littala is a Finnish brand of glassware that, in typical Scandinavian style, makes great use of minimalist design. Glassware collections make use of patterns or colours, and in select cases, both, meaning there is a collection for all tastes and home décor.

The Eva Solo glass is mouth-blown and sports an unusual sloped design. It's not just to make it look pretty though, as the slope allows the flavours of your whiskey to really come to the fore (and provide an easier route into your mouth, of course).
Shop Now 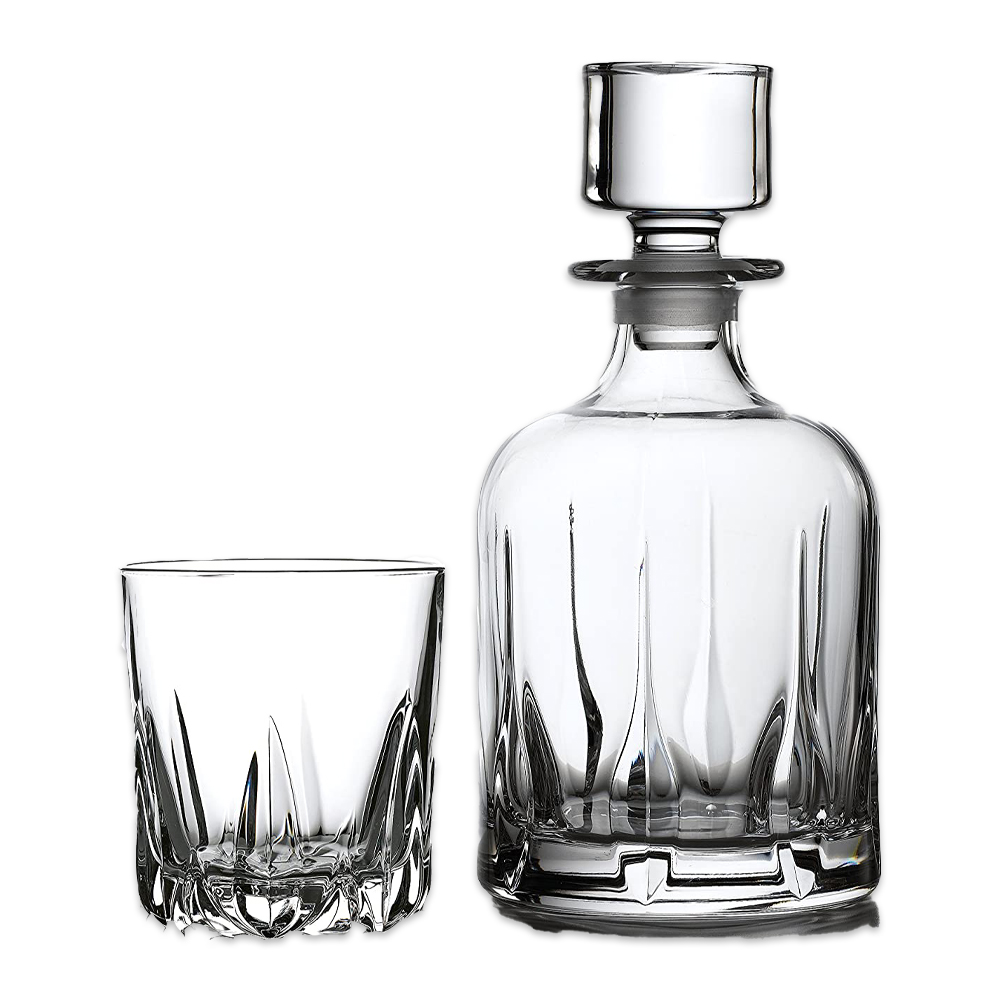 5 of 8
Royal Doulton
Royal Doulton is one of the most well-known glassware and ceramic companies to come from the United Kingdom. Founded in 1815, the company didn't take its current name until 1901 when it received a Royal Warrant from King Edward VII. Royal Doulton ceramics have since appeared in the 2018 Mary Poppins remake and the James Bond films.

Clearly being a company to encourage dinner parties, this Mode whiskey glass set comes with six glasses and a decanter, so you can channel your inner Don Draper and offer a drink to your friends. Design-wise, they're perhaps more modern in their approach than you would expect from a company such as Royal Doulton, but it provides more universal appeal.
Shop Now 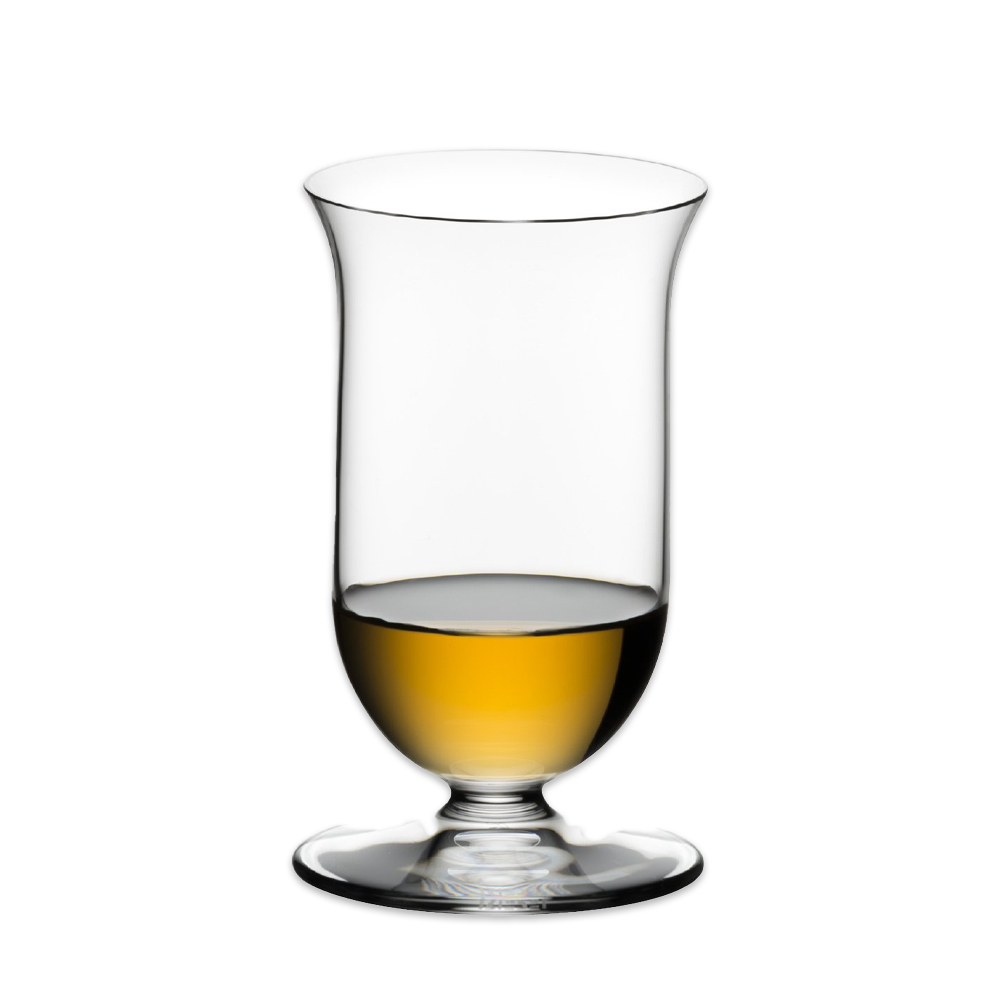 6 of 8
Riedel
Austrian glassware manufacturer Riedel was founded in 1756. It's primary focus is to develop various styles of glassware that enhances the flavours of different wine grape varietals (although some publications cite Riedel's claims as complete nonsense).

Nonetheless, this Vinum glass is said to be the perfect suitor for single malt whisky. The result of several design workshops conducted in 1992, the Vinum rocks a out-turned lip which claims to highlight the sweet flavours of your single-malt.
Shop Now 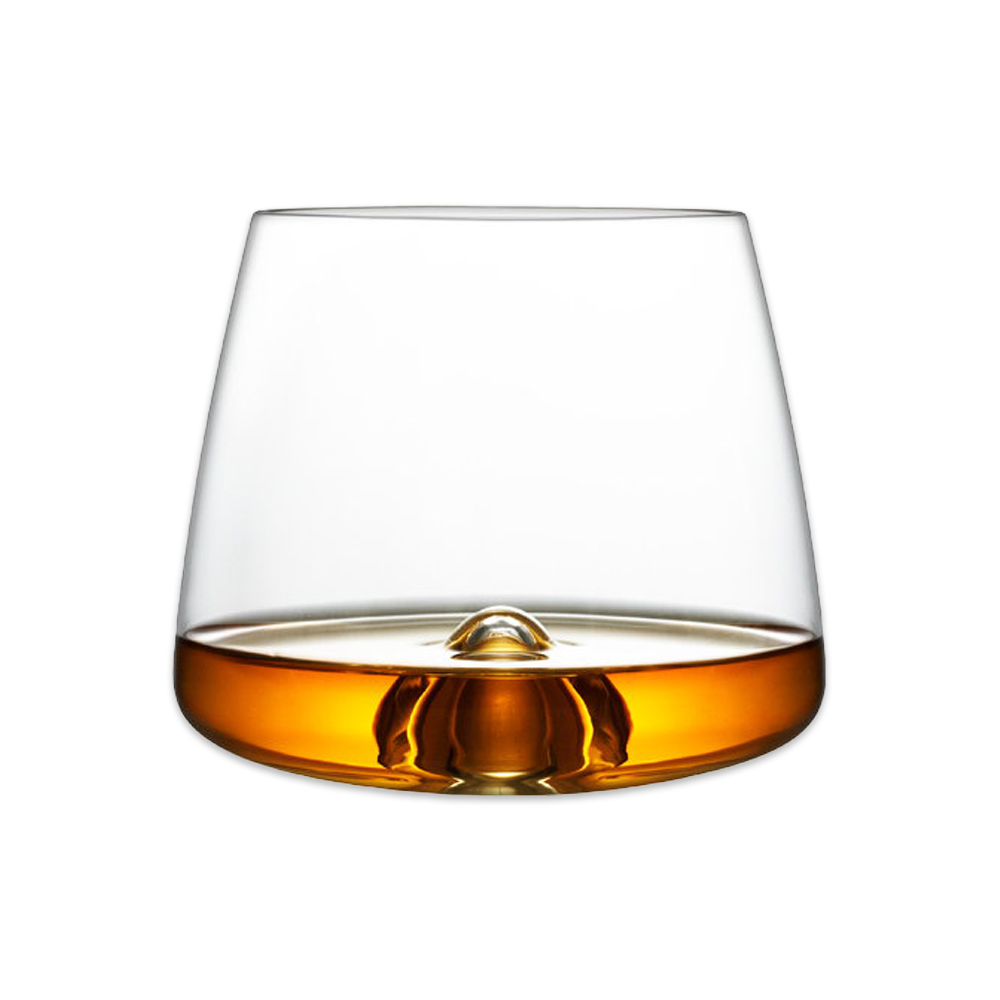 7 of 8
Normann Copenhagen
Normann Copenhagen was founded in 1999 as a design company with a particularly Danish flair. Products include furniture, textiles and lighting (you may recognise the Norm 69 lamp) all of which encompass simple, yet contemporary design.

This set of whisky glasses was designed by Rikke Hagen for the brand, and exhibit typical Nordic style. A wide opening helps to emphases the natural aromas of whatever whiskey you pour in and being mouth-blown, are of incredibly high-quality.
Shop Now 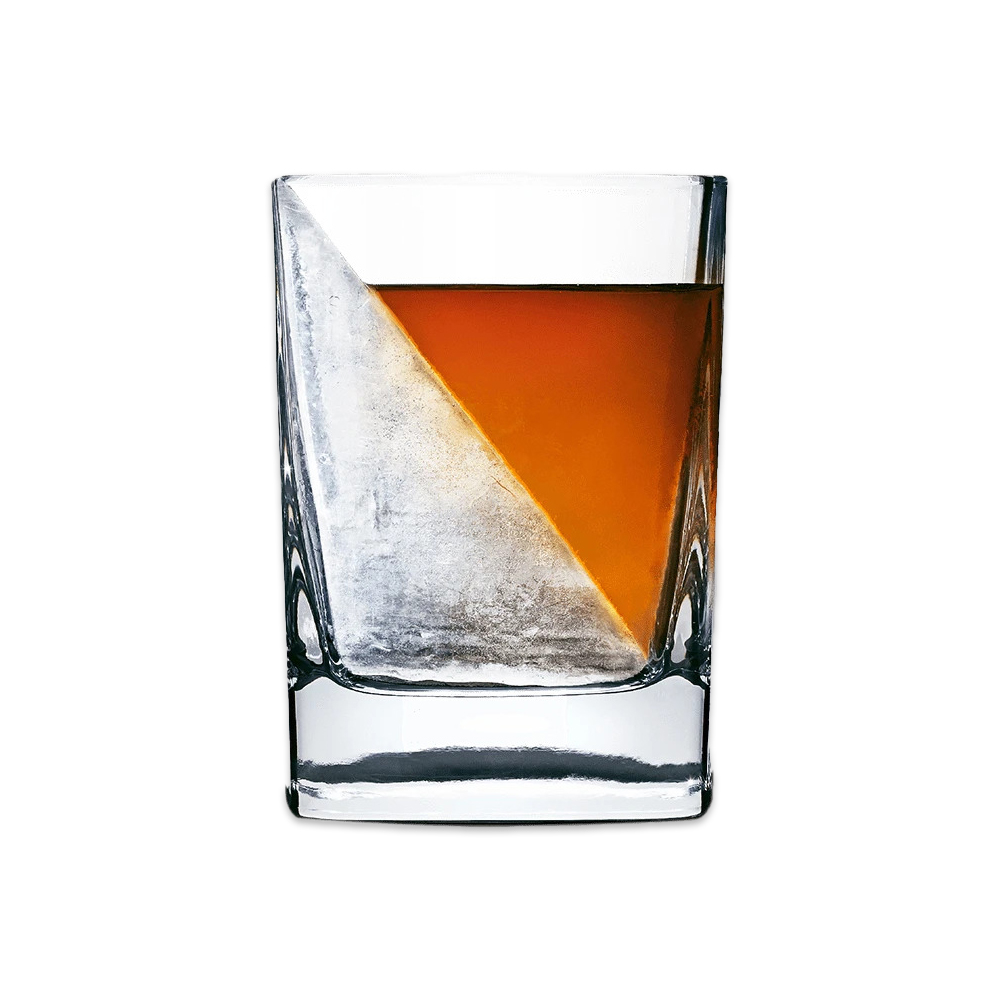 8 of 8
Corkcicle
Corkcicle is a relatively young company having been founded in 2010, it's also not one with a common tie to glassware in particular. However, the company has always been interested in the idea of keeping things cold in interesting and inventive ways. It's perhaps best known for its range of insulated bottles to keep liquids hot or cold, and everything it makes is reusable and sustainable.

The Whiskey Wedge is Corkcicle's modern take on the humble whiskey glass. You get an Old Fashioned glass and a wedge-shaped separator. With that inside the glass, simply fill the glass with ice, freeze it for a few hours and you're left with a perfectly solid wedge-shaped piece of ice that you can pour your whiskey onto to enjoy chilled, without diluting too much.
Shop Now