Frivolous as fashion might be, there’s not much out there that can compete with tartan’s storied history.

Worn by monarchs, punk rockers, and unpopular Prime Ministers, tartan has crossed social and cultural boundaries, and it never seems to truly go away. A recent renaissance by fast-fashion retailers and the likes of and Burberry tells us that this trend is set to continue well into the future of menswear.

Tartan’s enduring, if inconsistent popularity deserves more than an honourable mention in the annals of menswear. Here, we offer a brief and by no means definitive summary about Tartan’s peculiar origins, the period of peak-tartan during the 20th century, and the gradual return of tartan pants to respectability in contemporary menswear.

Hate to break it to ya, but tartan isn’t quite as Scottish as we originally thought. There’s solid evidence to suggest that tartan existed in Europe and Asia well before the 18th century. While the Scottish clan system certainly played its part, the patterns we recognise today are largely products of the 19th century weaving industry. Letdown? Maybe. The truth? Unfortunately.

In a stroke of irony (that endlessly pisses off true blue Scots) tartan’s wider popularity can be attributed to the efforts and/or appropriation of two Brit royals – Queen Victoria and Prince Albert. They couldn’t get enough of it, decking themselves and their castles out in enough tartan to make even the most fearsome highlander blush.

For better or worse, tartan took a funny turn in the 20th century. Once favoured by monarchs and the well-heeled, tartan shed some of its upper-classness at the hands of anti-establishment misfits and punks. If you know your music history, you’ve probably seen black and whites of Johnny Rotten in tartan-to-toe, attending court or stoking the fires of dissent onstage. Funnily enough, Royal Stewart tartan became an essential piece of the punk uniform – despite the fact that you’re supposed to secure royal permission to wear it (we assume this directive didn’t last long).

Punk eventually fizzled, and tartan did too (although that didn’t stop it ending up on shortbread boxes globally). But after a period of dormancy, we’re seeing glimpses of a resurgent tartan, even if it doesn’t reclaim its former glory as the sartorial calling-card of the young and culturally dispossessed.

We all saw Brit PM Theresa May cause a bit of a stir with her Black Watch tartan suit. Less controversially, high street labels like Burberry have gotten in on the fun with tartan trousers for business or play (no Parliament required). Finally, tartan’s universal appeal has also resonated in men’s formalwear (a velvet jacket with tartan strides, anyone?)

So if you thought tartan was just for burly Scotsmen and Sex Pistol cover bands, you’re a bit off the mark. Tartan is also a growing market, with a formidable 5,000 tartan weaves in circulation today and more on the way. Tartan is back, with plenty to go around.

RELATED: Wide Legged Trousers Are Officially In; Here’s How To Wear It

How To Wear Tartan Pants

So now that you’ve gotten the back story of where tartan came from, it’s time to teach you how to wear it. Given that tartan is a bolder pattern, it’s crucial to get the proportions and pairing right to avoid looking like nan’s table cloth from 1960.

Tartan is a vast kingdom and there is a world beyond the bold and memorable Royal Stewart tartan you see just about everywhere. Want something muted and understated? Black Watch tartan is king. Feel like something neutral and earthy? Mackay Weathered tartan is a solid pick.

With over 5,000 tartan weaves available, even the most clueless kids in the back of the class can find something that suits their tastes and the occasion. You’re not bound by heritage either. The notion that clans or families ‘own’ a tartan pattern is (mostly) poppycock.

Check patterns aren’t slimming – any tailoring nerd can tell you that. Next time you’re in town, visit your tailor and ask him to tuck the trouser leg in a bit with a small break over your shoe. This will offset the illusion of bulk from a tartan check, and stop you from resembling a serial op-shopper.

Have you ever seen a guy mix and match tartan with another pattern? I haven’t either, but I’d put money on it looking rubbish. Pattern marriages rarely work, so your best course of action is to keep it simple. Keep the top half of your outfit anchored in block colours and let the tartan pants take centre stage.

You’ll see the likes of Lewis Hamilton wearing tartan from top to toe. Be careful. This is quite a full on look and may not be suitable or wearable for most.

What is the difference between a tartan and a plaid?

Tartans are plaids, with intersecting horizontal and vertical stripes that are replicated multiple times. Unlike plaids, however, their patterns carry history and are often associated with a historic clan, family or community.

What is the best cut for tartan trousers?

Your tartan trousers give off the illusion of bulk, so make sure to wear a pair with a slim fit and a small break over the shoes.

What to wear with my tartan pants?

You should never pair patterns with patterns. Keep your shirt simple. Choose one in block color and let your tartan pants get all the attention. 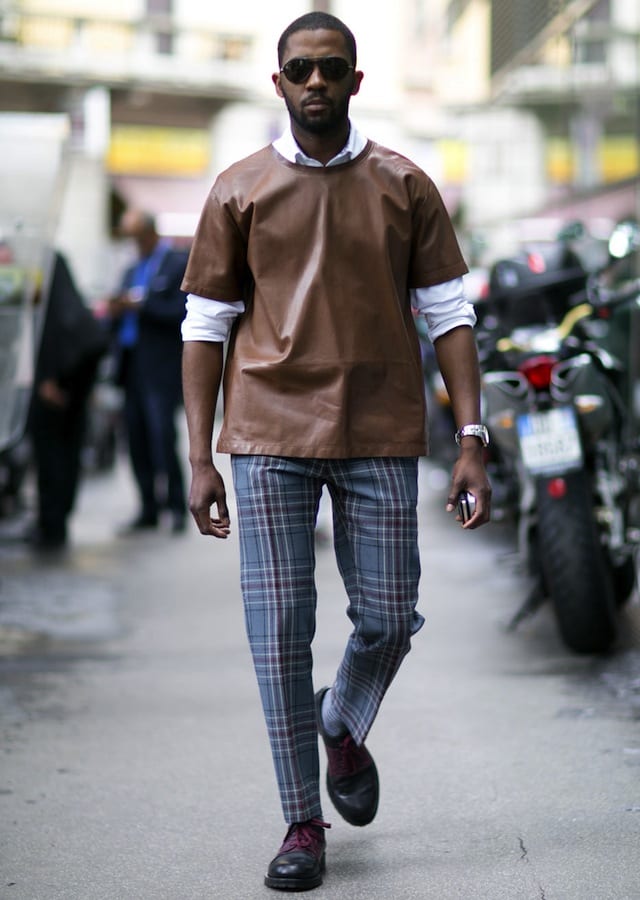 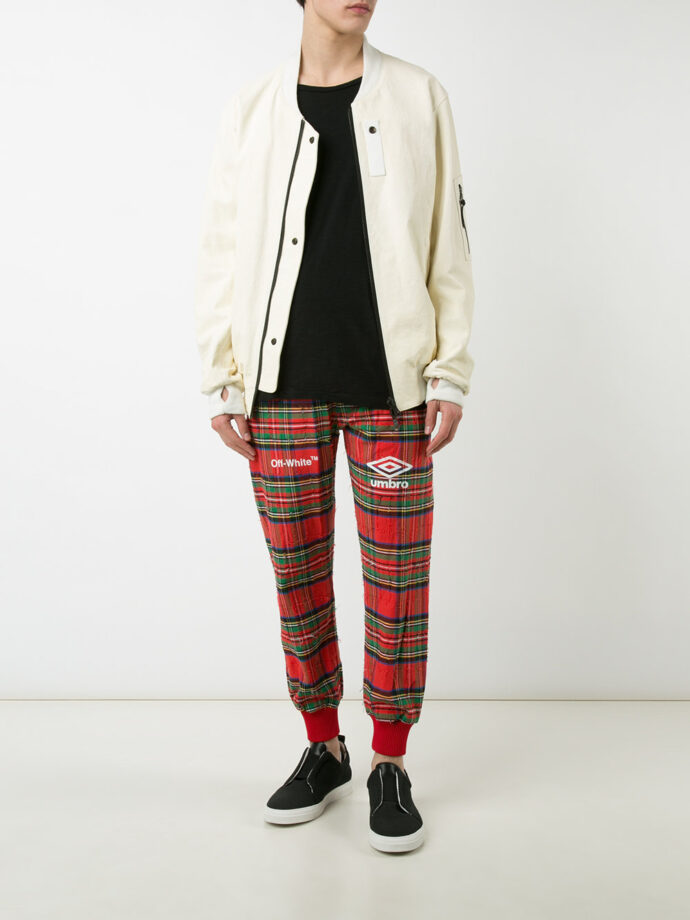 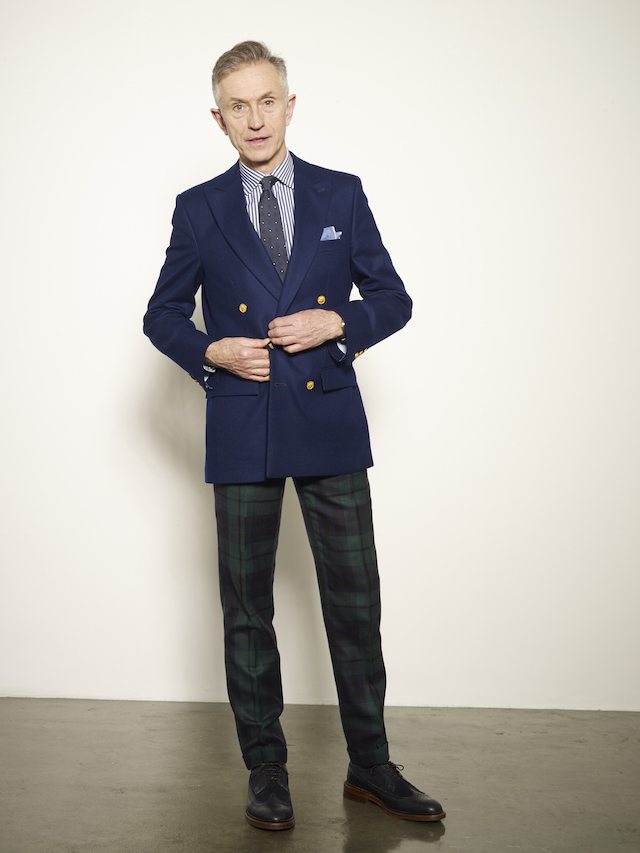 3/11
A gentlemanly affair with a double breasted jacket 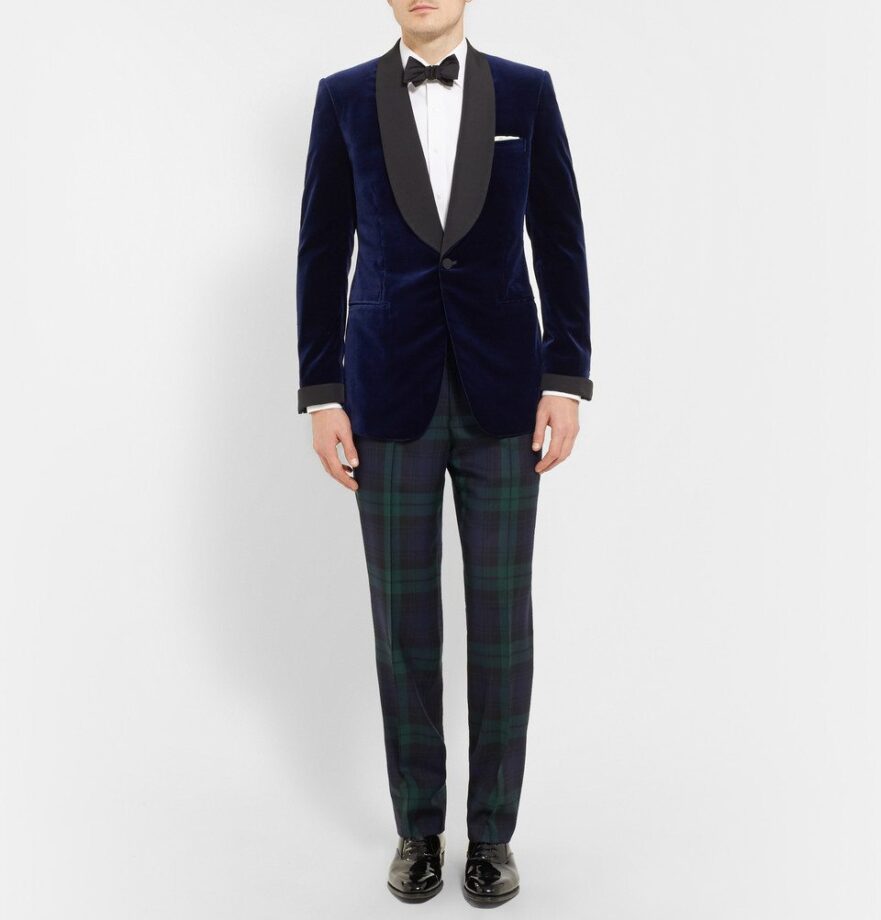 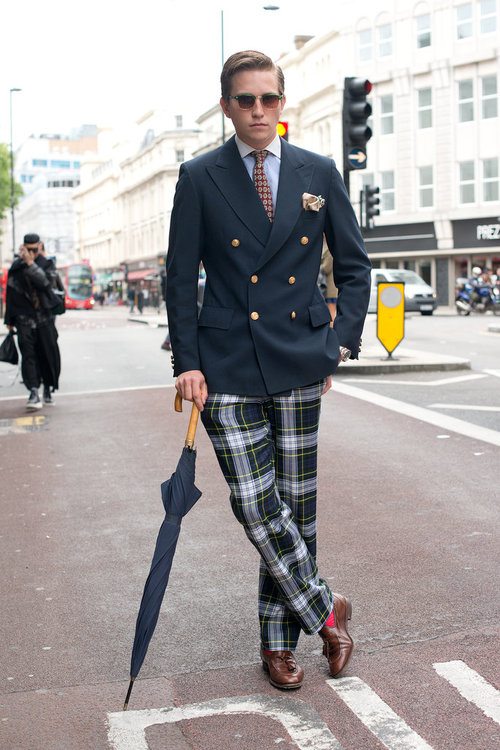 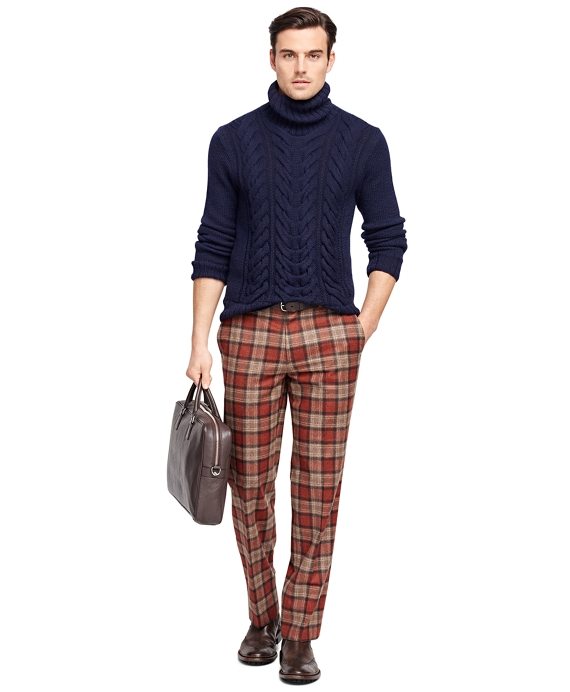 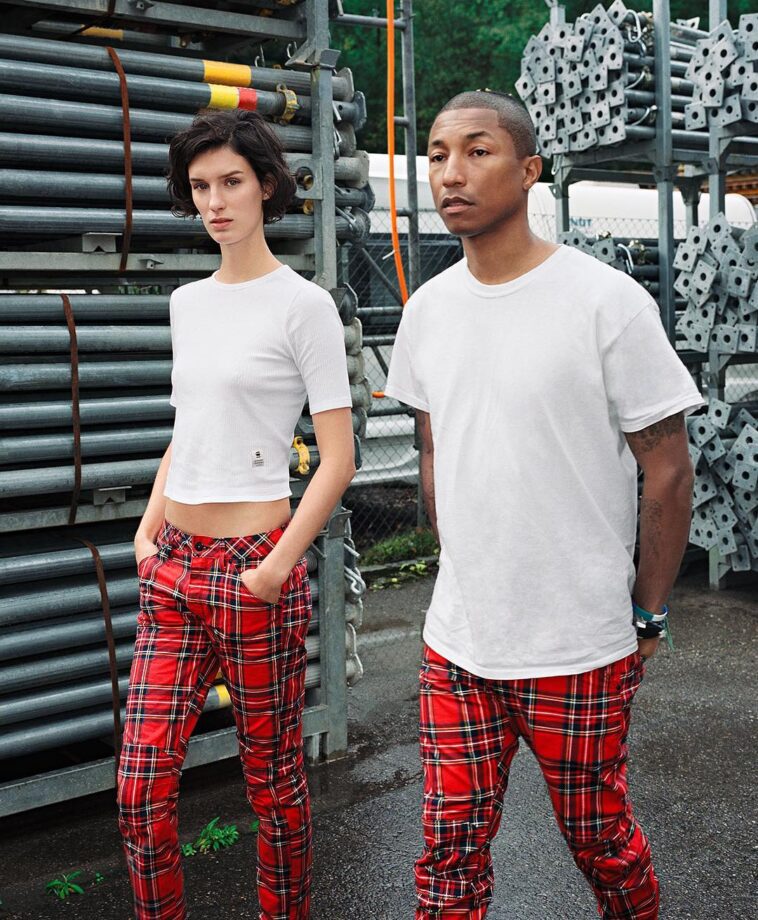 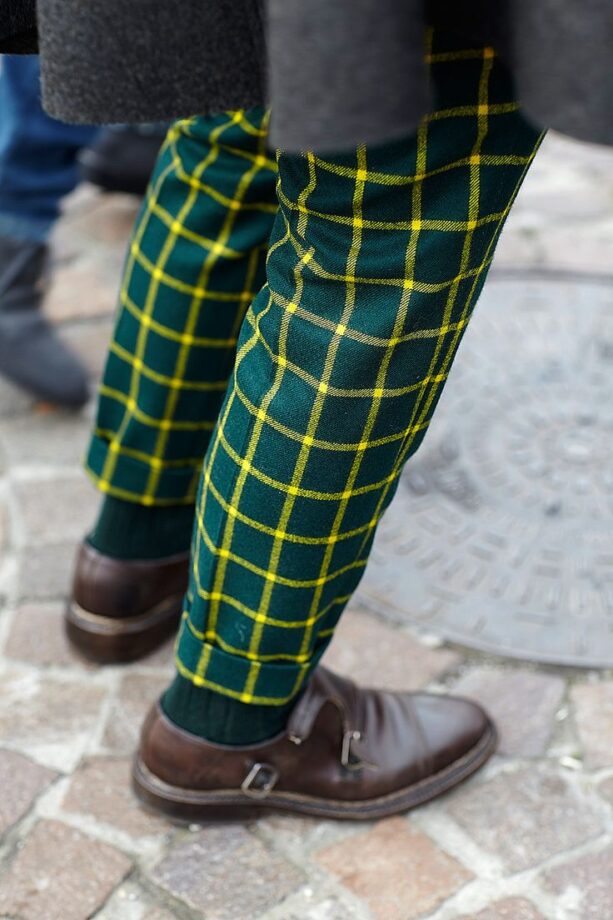 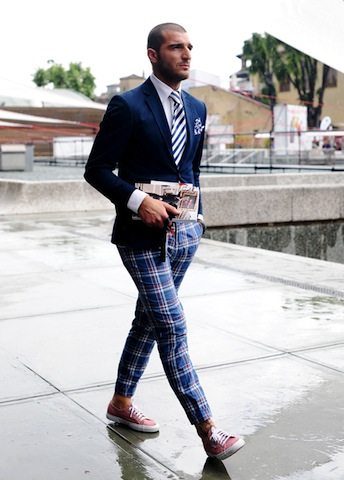 9/11
Perhaps with a pair of sneakers, good sir? 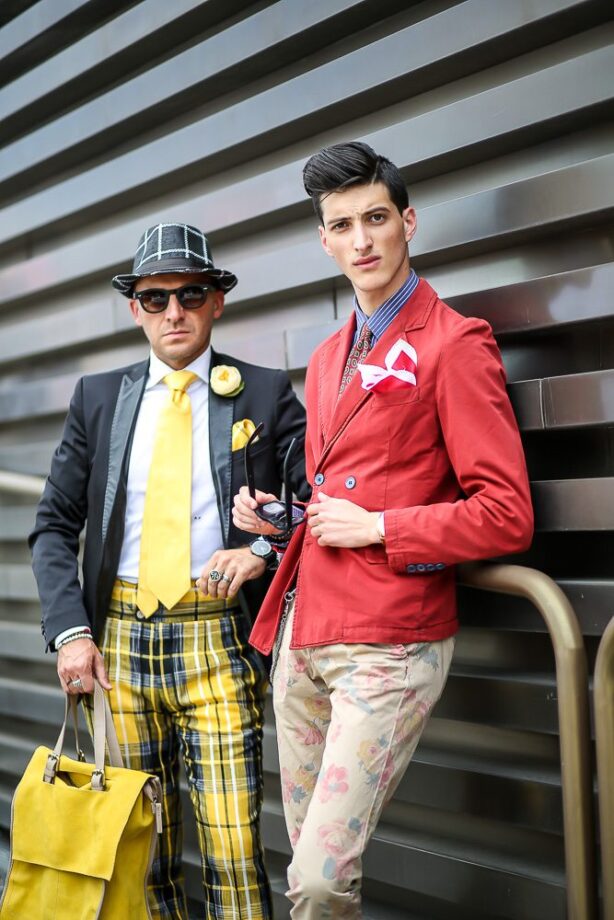 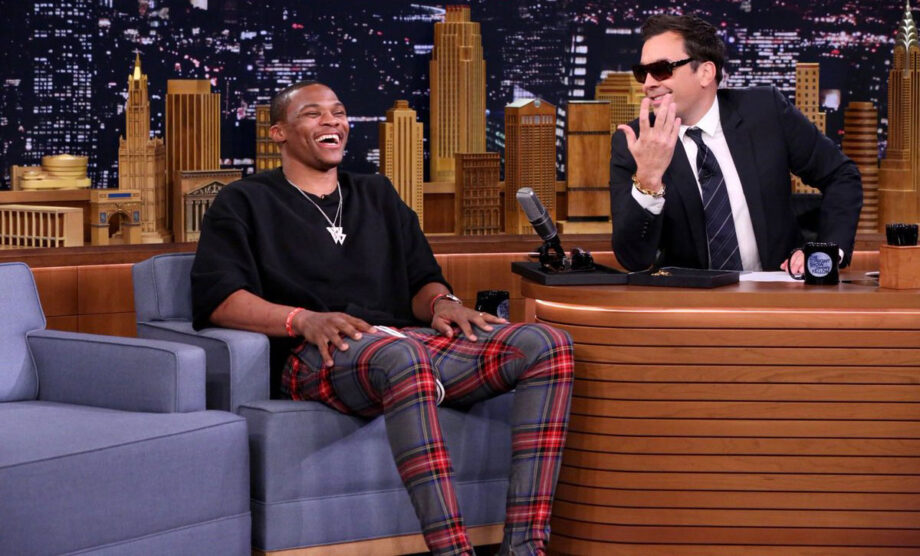