Lewis Hamilton’s jumped on what’s shaping up to be the most divisive style trend of 2020. Thankfully his watch is pretty universally cool.

The Formula One champion, who’s enjoying some downtime in Tuscany ahead of the 2020 Tuscan Grand Prix, shared his latest sartorial experiment with his almost 20 million Instagram fans: a lairy matching shirt, shorts and bucket hat combination, sporting a colourful grid pattern. Hamilton rounded off the look with some frameless sunglasses, Dior B23 luxury high-top sneakers, and a fetching IWC timepiece.

Leaning against a bright red Vespa scooter (very Italian), Hamilton shared this shot showing off the ensemble in full.

It seems Hamilton, like a lot of celebrities this year, has taken to doing the ‘matchy-matchy’ thing: Kevin Hart, Cristiano Ronaldo, Scott Disick, LeBron James… It’s not for everyone but he makes it work. We’re more interested in the watch than his ‘table cloth’-esque outfit, truth be told.

The Big Pilot Perpetual Calendar perched on his wrist is a limited edition signature version of the already complicated and expensive watch. This Lewis Hamilton edition Big Pilot has a distinct Bordeaux red pallet and was limited to only 100 pieces (well, 99 really, seeing as Lewis demonstrably kept one for himself). Normal Big Pilot Perpetual Calendars fetch for around 45,000 AUD on watch aftermarkets like Chrono24, but a rare edition like this one – that has such a desirable colour scheme and celebrity association – would likely fetch for much, much more. Indeed, there aren’t any for sale on Chrono24 right now.

Hamilton showed off different angles of his outfit on his Instagram story, where he also shared a closeup of the watch, as well as a new pair of driving gloves from Mercedes-Benz and Virgil Abloh’s ‘Project Geländewagen’ collaboration. 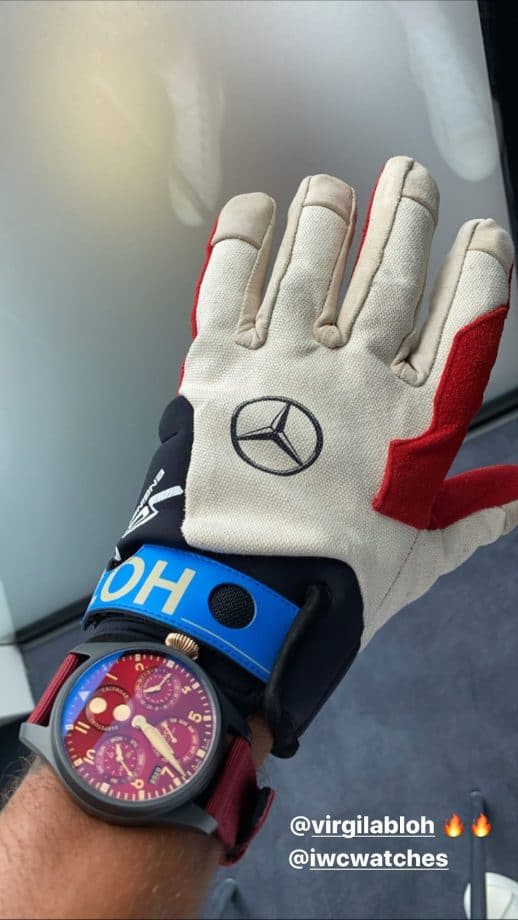 The Tuscan Grand Prix, the 9th round of the 2020 Formula One World Championship, is set to run from the 11th to the 13th of September, and will see the fastest racers in the world make their way around Mugello – the first time an F1 race has been held on the circuit. Hamilton sits comfortably on top of the ladder, 47 points in front of #2 in the standings, Mercedes-AMG teammate Valterri Bottas.

Young AlphaTauri driver Pierre Gasly from France scored his first gold at Monza last week, and Renault’s Australian champ Daniel Ricciardo is keen for a win, so Hamilton will need to up his game to maintain his dominance in Tuscany this weekend.