Ever since it hit our screens back in 2013, the BBC’s Peaky Blinders crime drama has had us hooked. And not just because of the intriguing storyline or excellent cast, oh no. This popular crime drama has also paved the way for the resurgence of the 1920s gangster look, which has since been interpreted and imitated by guys all around the world.

The captivating series set in Birmingham, England, revolves around the Shelby crime family’s exploits right after the First World War. With the razor-sharp suits and awesome haircuts, it’s no wonder that fashion-forward guys are now looking to Tommy Shelby and his gang for inspiration.

If you’ve seen the show and want to get the Peaky Blinders haircut, then this article will serve as the ultimate guide.

What Is A Peaky Blinders Haircut?

A Peaky Blinders haircut has become quite popular in recent years, thanks to the intriguing series of the same name. Guys are now lining up at the barbershop to get a 1920s Birmingham-inspired look.

While a the term actually refers to the newsboy-style hats the gang wears, in this instance, a Peaky Blinders haircut doesn’t refer to one specific cut – although in most cases, will be a variation of an undercut with a fade – but rather, a series of haircuts sported by actors Cillian Murphy, Paul Anderson, Joe Cole and Tom Hardy, in their respective roles as Tommy, Arthur, and John Shelby, and Alfie Solomons.

The majority of the haircuts featured in the show make use of shaved back and sides, and it is their hair on top that differs between the characters. The most iconic and recognised styles include a slicked back, side part and a French Crop.

Why do all the characters rock such hard, shaved sides? We hear you ask. Well, during the postwar era (in which the show is set), people shaved their heads like this because of lice. The haircut was also popular among gang members since it was practical during street fights (no playground antics of pulling on someone’s hair).

How To Get A Peaky Blinders Haircut?

Imitating any of the haircuts you see on the show is surprisingly simple. First, you need to decide which one stands out for you, or at least best suits your face shape or hair type. Fortunately, the boys all sport haircuts that are pretty unique to each other, the only thing that binds them together is a short back and sides.

However, having the sides shaved is something we see a lot of on the high street, so opting for this hairstyle won’t cause others to turn their heads in dismay. The main hairstyles chosen for the show are disconnected undercuts, textured crops and short crops, and haircuts with a fringe. Once you know which style you want, you’ll need to make a trip to the barber and invest in some high-shine hair product for the ultimate slick back look. 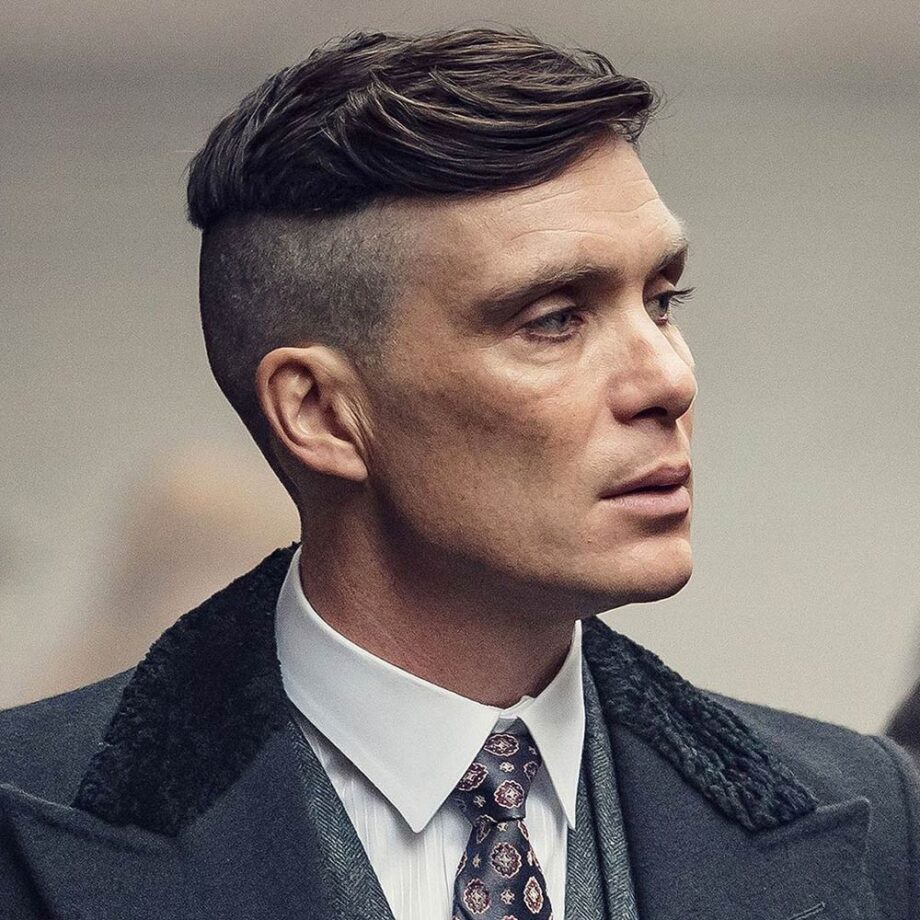 The main man Thomas Shelby (portrayed by Cillian Murphy) has one of the most stylish and easily imitable haircuts of the entire gang. Essentially a French crop without the hair on the sides of the head, you would need to ask your barber for a textured crop with high fade (assuming he wasn’t already aware of what a ‘Tommy Shelby’ cut would entail).

Tommy Shelby’s haircut, admittedly, looks best on guys with more elongated faces, however, guys with other shapes can still get a similar cut; the proportions and lengths of the hair will just need to be adapted. Your barber should be able to help you out in this regard.

You will first need to ensure you have length on top, so that your hair is long enough to style in the first place. If you currently rock short hair, then be prepared to play the waiting game. You can still get the back and sides of your hair cut to a shorter length while you go through this process.

When it comes to styling, your main mission is to make sure the hair moves forward from back to front. This can be achieved by using a hairdryer and blowing hot hair from behind. You can then work through a matte styling paste or clay to give your hair some added texture. 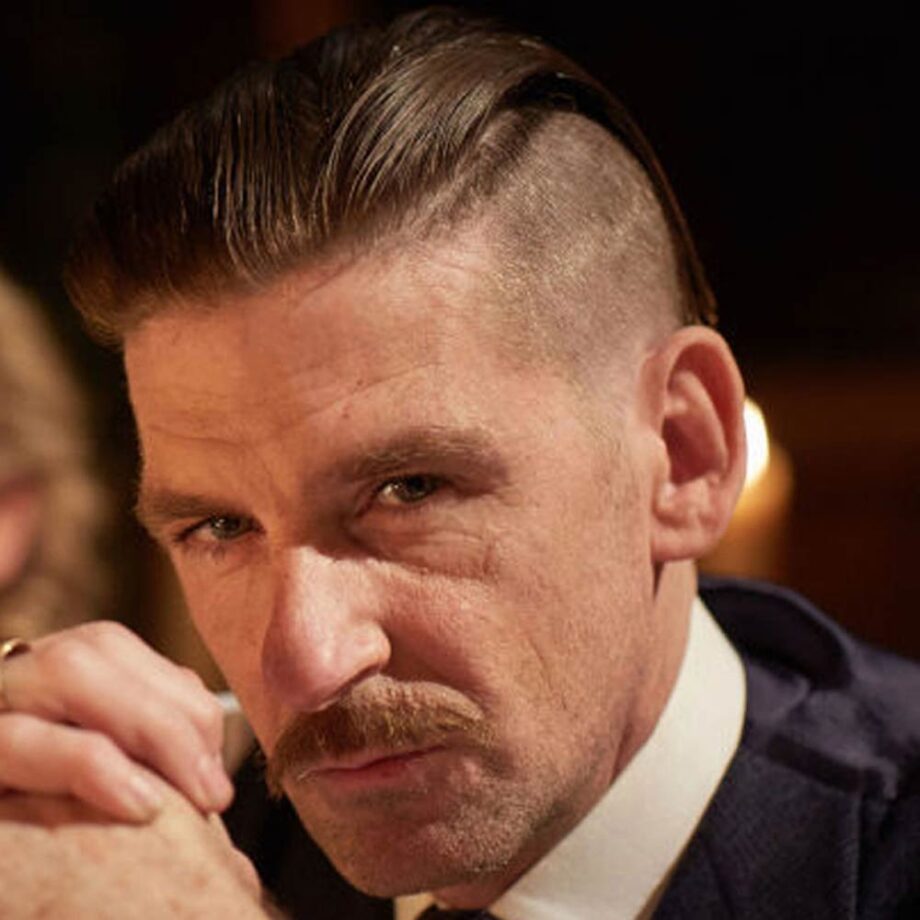 Perhaps an even more iconic character – and look – in the show, is Arthur Shelby. The hotheaded brother (portrayed by Paul Anderson) rocks a disconnected undercut not too dissimilar to that seen on Brad Pitt‘s character in Fury. Both characters choose to slick back the hair on top, a move that has found favour with many modern gentlemen for its rebellious yet sophisticated look.

The main thing you’ll need to imitate Arthur Shelby’s Peaky Blinders haircut is long enough hair on top to sweep to the back of your head. With that taken care of, ask your barber for the disconnected undercut, which will see the sides of your head shaved down to a grade 1 or 0, and completely up the side to where it meets the top.

To achieve Arthur Shelby’s iconic undercut at home, you’ll want to use a hairdryer and a brush to work the hair towards the back of your head and finish with a high shine pomade. Use a little hairspray to hold in place. 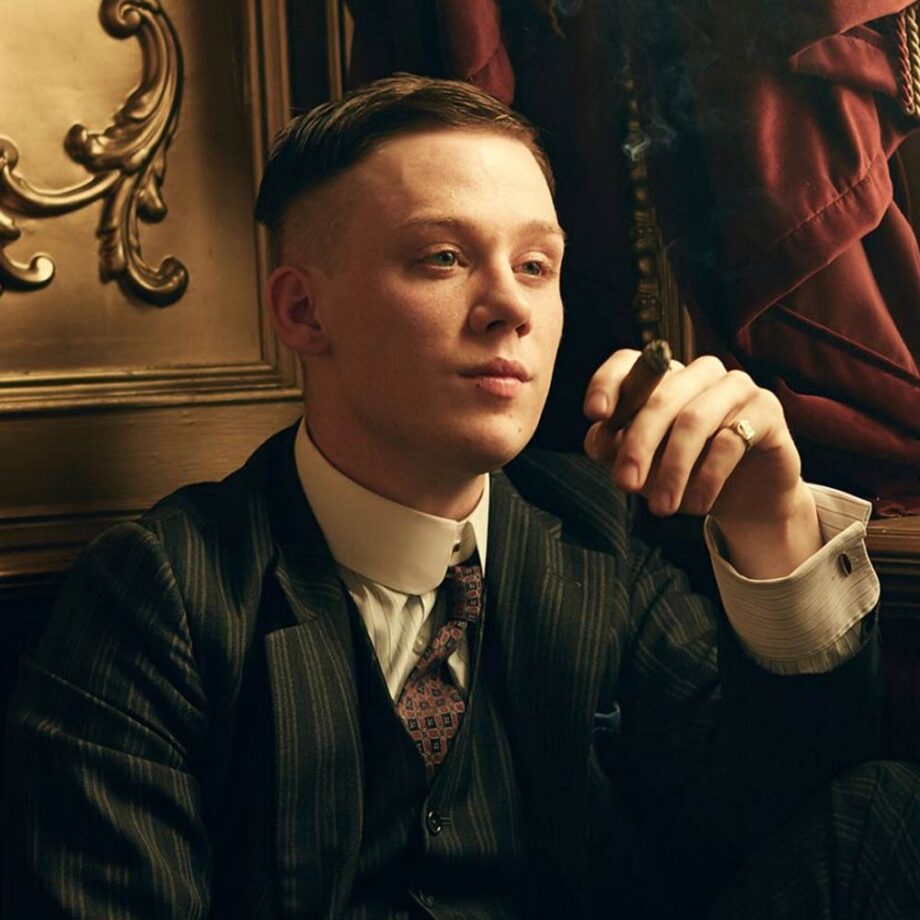 Rounding out the trio of brothers is John Shelby (played by Joe Cole). Like his brothers, John also rocks a disconnected undercut, but to keep things different, he opts for much shorter hair on top. Length-wise, it’s similar to a buzz cut or crew cut and should be short enough so that it is as low maintenance as possible.

Asking your barber for John Shelby’s haircut is relatively simple, and all barber should be able to pull it off. Simply ask for a short back and sides, such as a grade 1 or 2, and ask them not to blend the hair on top of your head. You will, of course, need to have longer hair in order to achieve the contrast effect.

Having some decent length on top is important, as you’ll need to work some product such as a high shine pomade, or even a matte effect styling paste (for a more casual look), to sweep it to one side. This haircut can be copied by almost all guys. 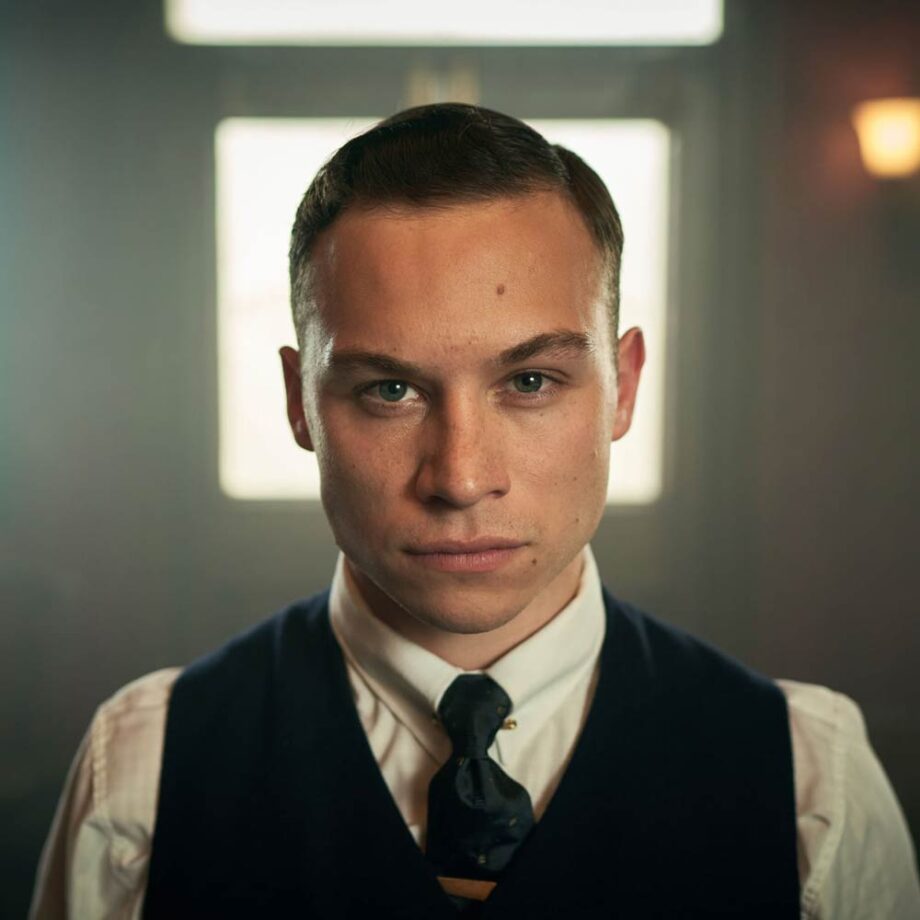 The Shelby brothers’ cousin Michael Gray (played by Finn Cole) distances himself from the foul-mouthed clan with a decidedly different haircut. Rather than go for the harsh, disconnected undercut, he instead rocks a rather more sophisticated and timeless side-part hairstyle.

No grade zero clippers needed here. Instead, ask your barber to taper the sides of your head, blending them in with the hair on top so as to create one seamless hairstyle.

Relatively simple to achieve at home, you’ll want to create the side-part using a comb after jumping out the shower, and using a hairdryer to sweep the larger portion of hair over to one side. You can work some product of your choice through the hair at this stage to hold it in place, or give a light spray of hairspray. 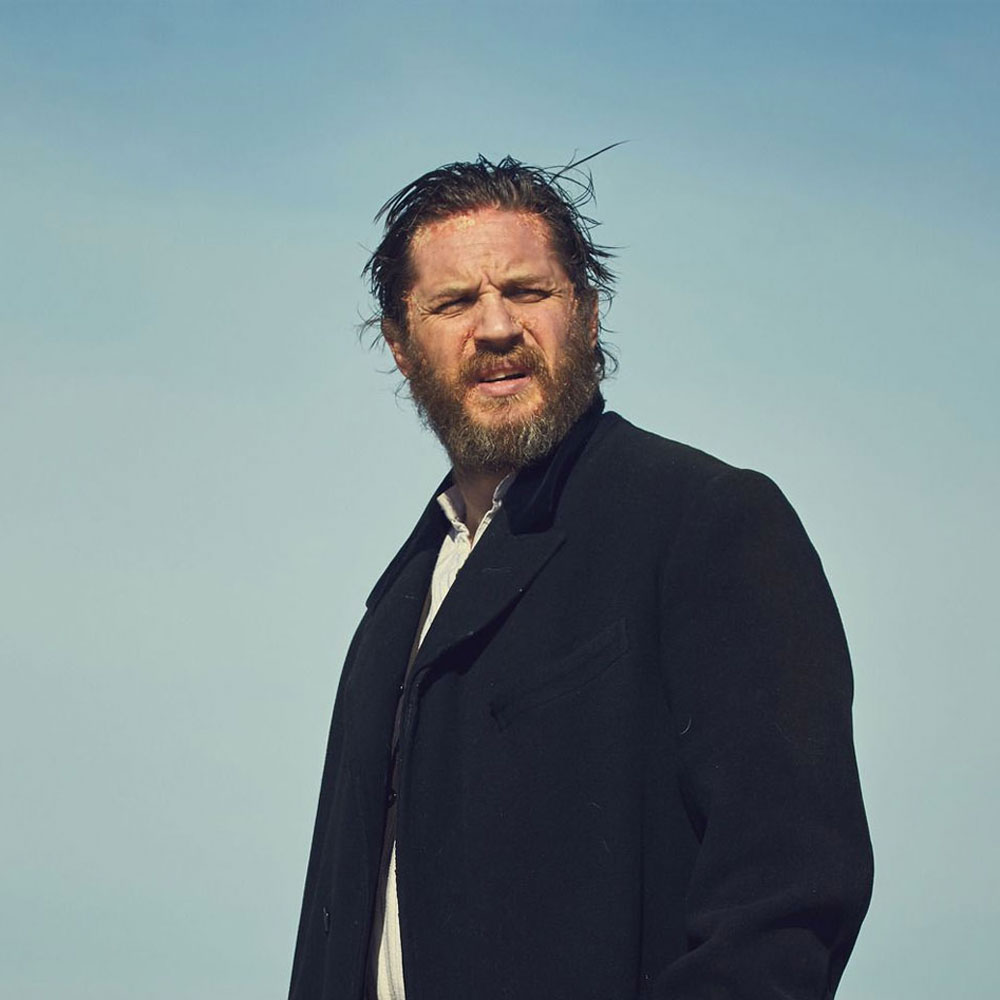 In Alfie Solomons’ case (played by Tom Hardy), the focus is mostly on his beard rather than his rugged and unkempt Ivy League hairstyle. Although sloppy and unruly, you can turn this look into a modern and masculine using a few small touches and a little grooming.

While beards are currently on-trend, well-groomed and maintained beards are way more appealing than messy and untidy ones.

Whilst you can of course ask your barber to help maintain your beard when you go in for your regular haircut, it is far more simple to look after at home compared to your hair.

However, any barber worth his salt should be trained in the art of beard maintenance, so feel free to add the service on when getting your Shelby haircut.

While you may not want Alfie Solomons’ caveman look, this might inspire you to grow a beard. If you decide to do that, you will need to be committed and have a ton of patience. Unlike a haircut, this is not a one-day thing.

However, when you finally achieve the length and the thickness you desire, you only need to worry about keeping it groomed and maintained. You can do this by trimming your beard around the edges regularly to keep it neat and modern. Also, make sure that your beard is healthy by washing, conditioning, and combing it routinely.

RELATED: How To Grow And Maintain A Perfect Beard

What is Peaky Blinders?

Peaky Blinders is a British period crime drama television series, produced by the BBC. It is set in Birmingham, England, immediately after the First World War, and follows the Shelby family and all their endeavours.

How do I get a Peaky Blinders haircut at home?

Fortunately, you can get yourself a Peaky Blinders cut with a set of clippers at home. Shave the sides to a grade 1 or 0 up to the point where the top of your hair starts. Then, use some scissors to evenly cut the hair to the desired length, and point cut to add some texture.

Sexy, Low-Maintenance Crew Cut Haircuts For Men To Own In 2021

Best Low Fade Haircuts For Men To Rock In 2021

The Haircuts Australian Men Can't Get Enough Of In 2021

The Definitive Guide To Different Hairstyles For Men In 2021

Best Short Back And Side Haircuts For Men