Whenever we talk about Dwayne ‘The Rock’ Johnson here at DMARGE, it’s usually got something to do with an insane workout or a gluttonous cheat day, but the Hollywood star who is consistently ranked among the highest-paid celebrities knows a thing or two when it comes to style, too.

Or does he? We’re not sure about the outfit he wore for the UK premiere of his latest film, ‘Jumanji: Next Level’ on December the 5th. Deciding to go more formal than his looks for the other European premieres earlier in the week, the ex-wrestler wouldn’t look too out of place at a school formal. 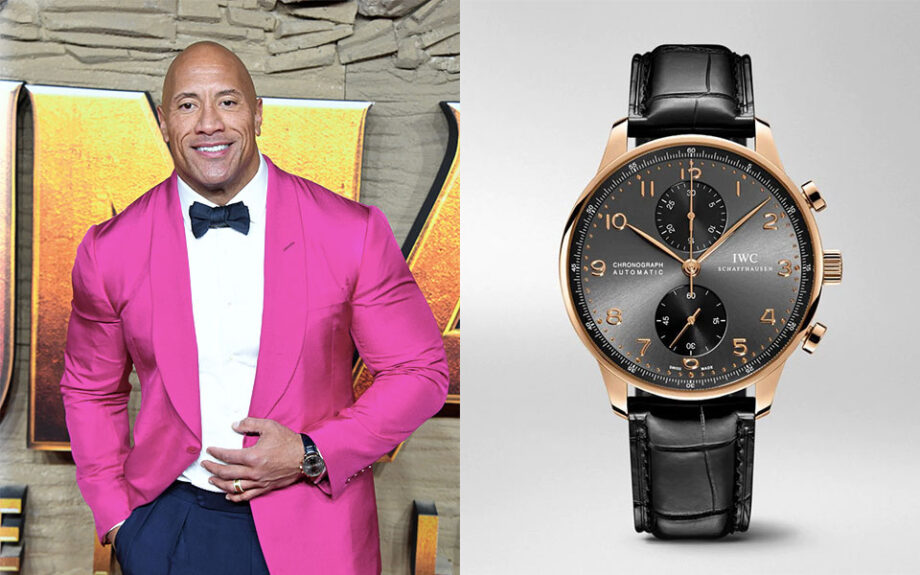 He made the (very) bold move to swap out a traditional black, midnight blue or white dinner jacket for a garish pink version instead. If he isn’t heading to a school formal then he should be presenting the Generation Game instead.

Fortunately, he rescues the outfit somewhat with his choice of watch, an IWC Portugieser Chronograph.

Specifically, it’s the IW371482, one of the more expensive variants within the Portugieser range, although it doesn’t come close to the asking price of the Portugieser Grande Complication. While that model will set you back US$235,000, you can get your own Portugieser Chronograph and be just like The Rock, for a rather more affordable US$16,100.

The giant Hollywood megastar has gone through his fair share of outfits on the press trip for the new Jumanji movie, including an array of timepieces. He could be seen wearing a gorgeous Panerai Radiomir PAM00515 watch at the French premiere a couple of days ago. It’s the most expensive variant within the Radiomir range at US$21,500, thanks in no small part to its proprietary Goldtech material, which combines a small amount of copper, with gold to create an alloy that gives off a distinctive red hue.

He teamed that timepiece with a black Dolce & Gabbana turtleneck (a menswear piece we don’t see enough of, to be honest), grey pants and Christian Louboutin black leather boots – he owes a great deal of thanks to his personal stylist, Ilaria Urbinati.

The Rock delivering style smackdowns day in, day out.