Even if you’re a full-time city-dweller, there are moments when you want to feel like an off-roading, rugged badass. That’s where the SUV comes in. But not the modern, plush SUVs designed by former Spice Girls – the real sport utility vehicles from the golden age of off-roading.

These barebones, classic four-wheel-drives are simple, honest, tough and totally cool. See for yourself. 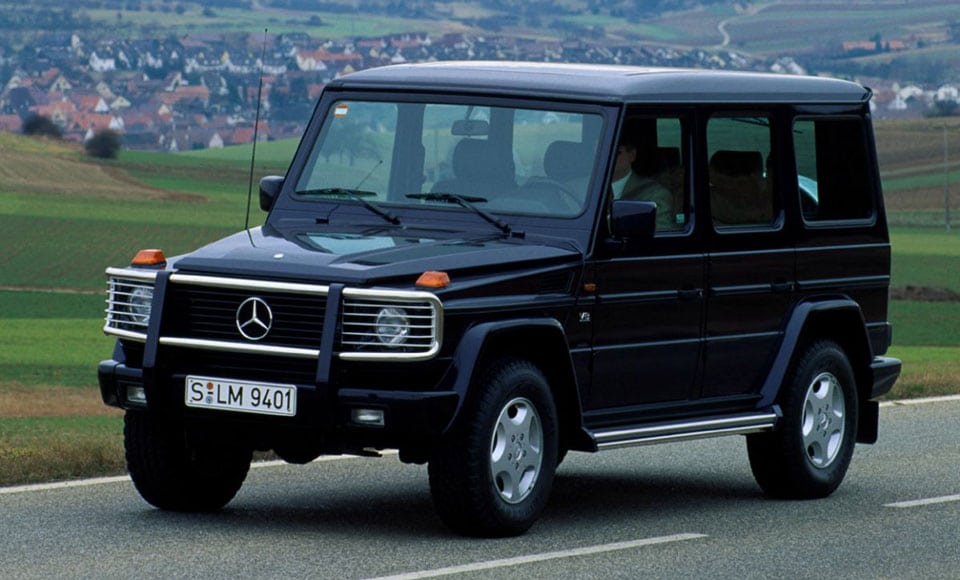 ‘Mercedes’ and ‘macho’ aren’t normally words you put together, but the G-Class changed that in 1979. If a mad scientist developed a way to transform testosterone into a car, it would be this. Built to take over small countries, the über-cool G-Wagen (short for “Geländewagen”, literally “terrain vehicle”) is known for its boxy styling and body-on-frame construction.

Impressively, the G-Class is still in production and is one of the longest produced Mercedes-Benz vehicles in Daimler’s history – these days, you can even get AMG and Brabus versions with big twin-turbo petrol V8s. But we prefer the older, more utilitarian G-Wagens. They’re far less “orange mocha frappucino”. 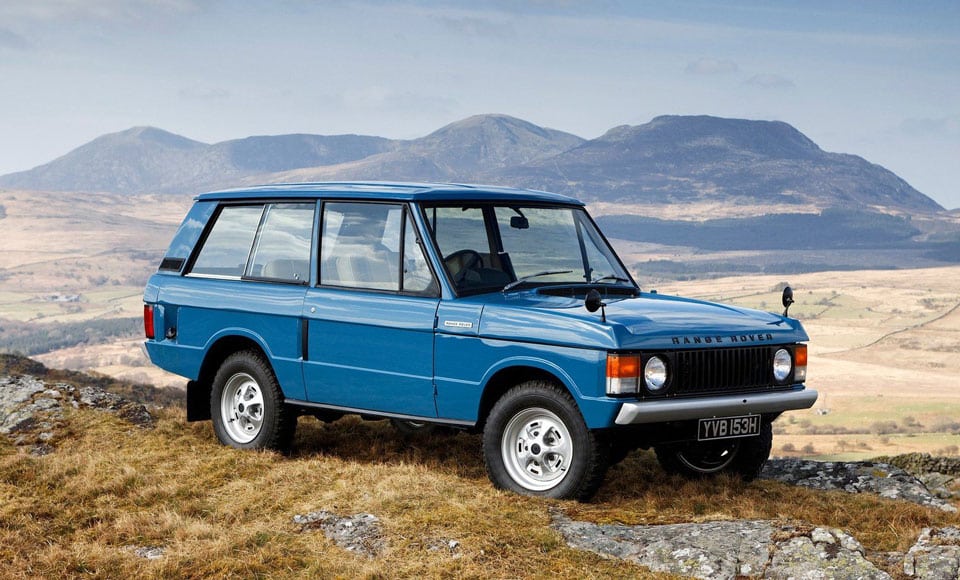 Now in its fourth generation, the original Range Rover made its debut in 1970. Rover had been experimenting with a larger model than the Land Rover Series as far back as 1951, but the first Range Rover prototype wasn’t built until 1967.

Unlike most other 4x4s at the time, the original Range Rover was designed to have a more luxurious focus with more car-like features – although it was still relatively basic. Nevertheless, it was a huge success, and quickly became the car of choice for the English aristocracy. Modern Range Rovers are insanely luxurious – but we have a soft spot for the boxy, less high-falutin’ Range Rover Classic. Plus you can get it as a two-door. Mad. 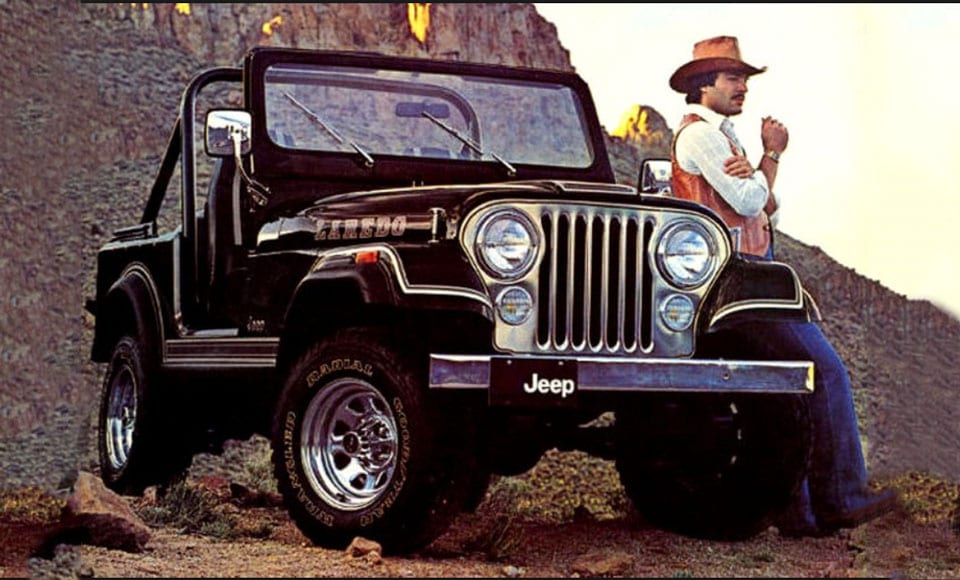 The Willys CJ (later the Jeep CJ or ‘Civilian Jeep’) was a civilian version of the famous Willys MB – the original ‘Jeep’ – from World War II. The first CJ prototype (the Willys CJ-2) was introduced in 1944. By the 80s, Jeep was up to the CJ7, which featured an optional new automatic all-wheel drive system called Quadra-Trac, an optional moulded hardtop and steel doors.

The upgraded Laredo model featured highback leather bucket seats, a tilting steering wheel and an elaborate chrome package that included the bumpers, front grille, and mirrors. The CJ is fondly remembered as one of the best Jeeps ever made, and the Laredo was the one you wanted. Yeehaw. 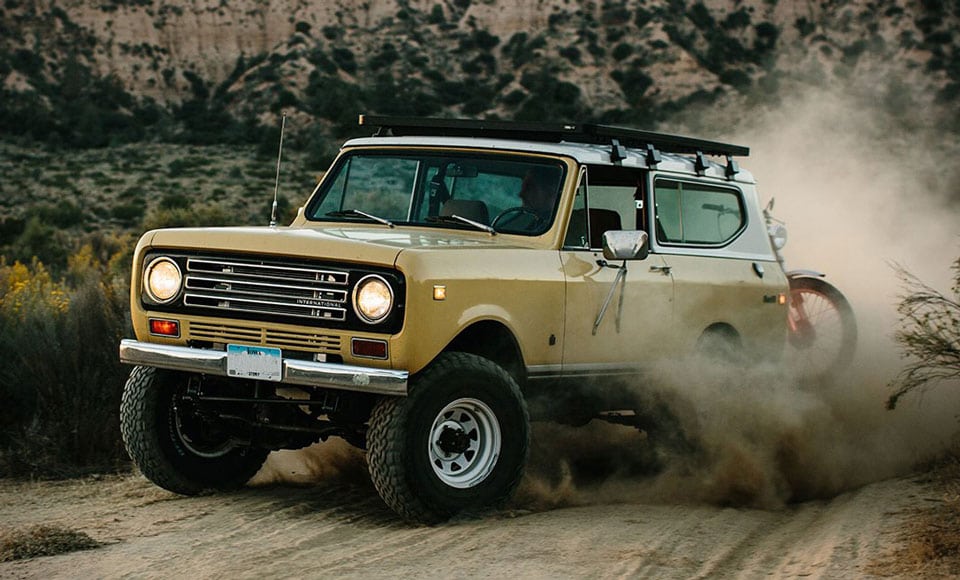 The International Harvester Scout was a pioneering American off-road vehicle that, while obscure these days, was arguably the prototype for the modern SUV. The original Scout 80s were built between 1960 and 1965 were pretty primitive things – International Harvester was mostly known for making agricultural machinery, after all – but later iterations such as the Scout 800 and Scout II were very well equipped (you could even get a Scout II with an internal roll-cage and removable doors like a Jeep).

High-riding, extremely capable and a little bit oddball, we think the Scout’s a ripper. They’re pretty rare though, so good luck finding one in the wild. 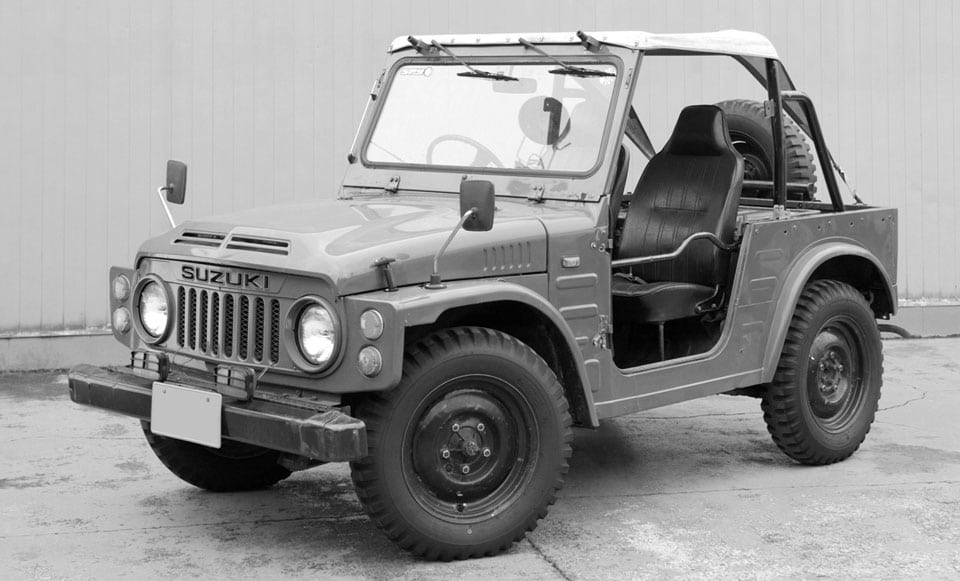 These days, it’s nigh impossible to get your hands on the new fourth-generation Suzuki Jimny – the things sell like hotcakes and the waiting lists are pretty hefty. All generations of the diminuitve 4×4 are pretty cool, but we think the very first Jimny, the LJ10, is worth shining a light on.

The LJ10 has its roots in a small car company called the Hope Motor Company. Before being purchased by Suzuki in 1968, Hope produced a small number of 4×4 ‘kei’ cars (which receive certain tax privileges and other benefits in Japan) known as the ON360s. When Suzuki took over, they gave the ON360 a makeover with their own two stroke, two cylinder, 25-horsepower air cooled engine and the LJ10 was born. It was the first four-wheel drive kei car to enter series production and became Suzuki’s first global success, lending it name recognition and a foothold in markets worldwide. 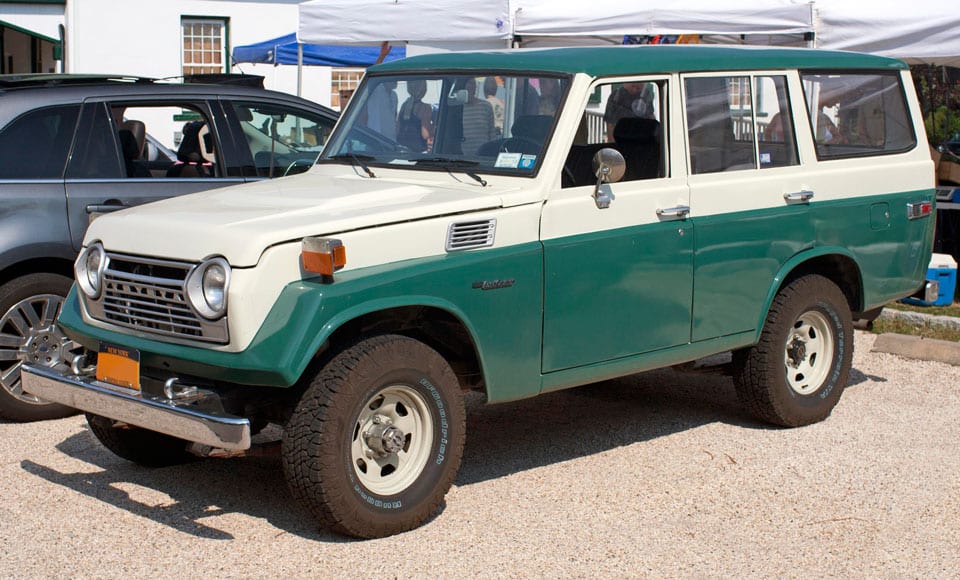 The FJ55 is easily one of the funkiest Land Cruiser designs in the car’s long history. A 4-door station wagon version intended for sale in North America and Australia, the very 60s-looking beast was colloquially known as the ‘Moose’. It has also been referred to as a ‘pig’ or an ‘iron pig’. Why? We’re not exactly sure, but undoubtedly it had something to do with its much lauded off-road abilities. 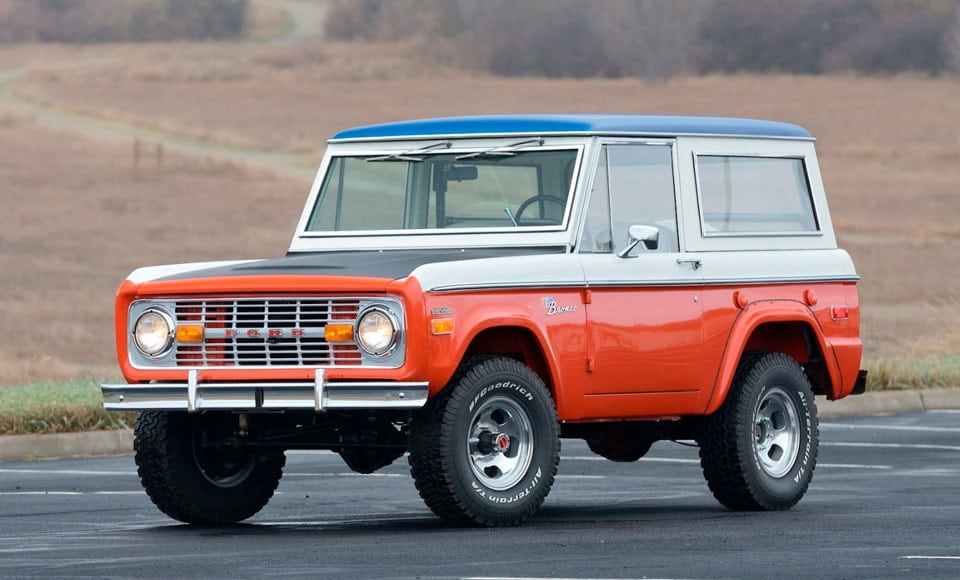 No, we’re not talking about OJ Simpson’s getaway vehicle… The first-generation Ford Bronco, produced between 1966 and 1977, was a groundbreaking car that helped popularise recreational 4x4s as well as help define the modern SUV. Ford offered a huge number of variants and options for the first-gen Bronco back in the day – including snowplows and posthole diggers – but the ‘Baja Bronco’ is an especially tasty variant of the first-gen Bronco.

After convincing Ford representatives to start a West Coast racing operation in 1950, race car builder Bill Stroppe elected to go off-road racing using Ford’s Bronco in the late ‘60s. By 1971, Stroppe Broncos had won both the Baja 500 and 1000, and Ford saw an opportunity to create a special Bronco for off-road enthusiasts. The Baja Bronco was supposed to be a “limited production duplicate” of Stroppe’s team cars. The most interesting upgrades to the Baja models were the automatic transmission and the power steering, neither of which were available on the regular Bronco in 1971.

RELATED: The New Ford Bronco Is Finally Available In Australia Thanks To This Company 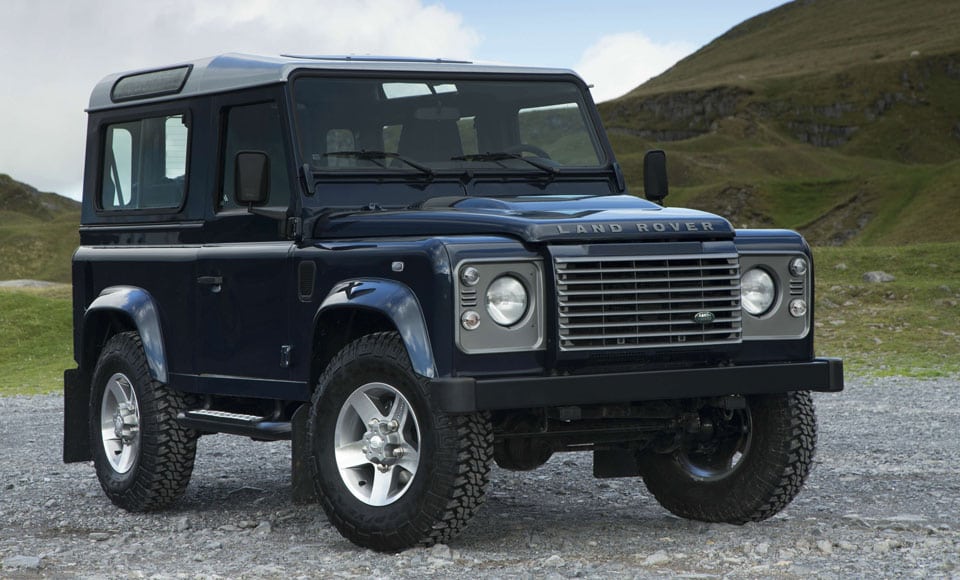 The Defender hardly needs an introduction. The original Land Rover Series was created in 1948 to serve the same general purpose as the American Jeep. The Defender followed on from the original Land Rover Series as the British firm’s utilitarian 4WD, and went on to have a similarly long production run. It’s well-loved by off-roaders, farmers and militaries around the world – including the Australian Defence Force, which developed its own variant, the Perentie, which used a Isuzu diesel engine.

The Defender name has been revived with the new L663 model, but that car’s much more luxurious and performance-oriented than the original Defender, which enjoys an enormous cult following to this day. If you miss the old Defender, never fear: the upcoming INEOS Grenadier is set to pick up the Defender’s mantle. More on that here. 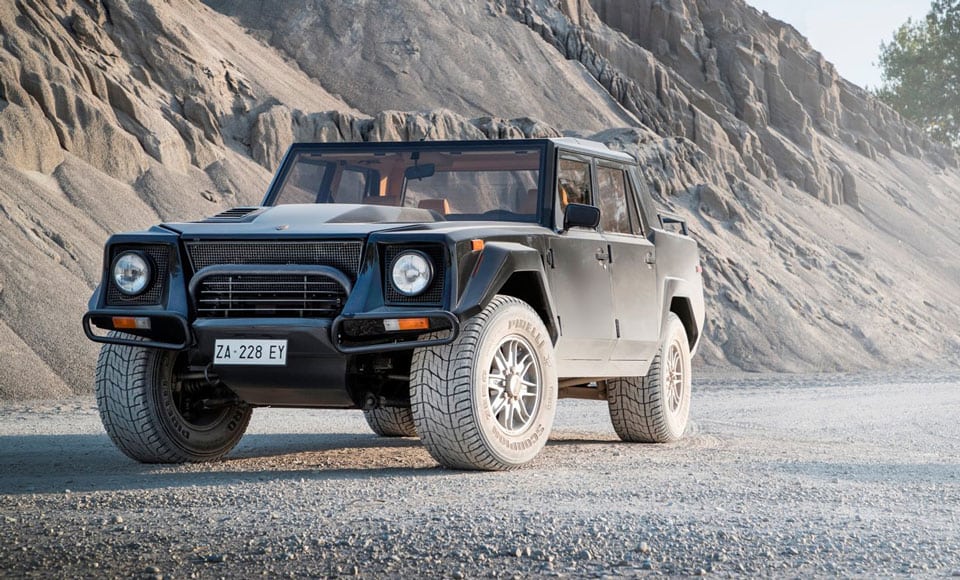 Yes, believe it or not, Lamborghini made a 4WD SUV. The ‘Rambo Lambo’ was the civilian version of a military vehicle Lambo wanted to pitch to the US and others, and was the first four-wheel drive model manufactured by Lamborghini. The car’s famous owners include H.R.H. King Hassan of Morocco, Sultan Hassanal Bolkiah of Brunei, Sylvester Stallone, Tina Turner and Eddie Van Halen.

Quite a few infamous names also appear on the Lamborghini LM002 owners list, too, including Mike Tyson, Pablo Escobar, Muammar Gaddafi and Uday Hussein, whose LM002 was blown up by the US military in 2004 during a “test” to simulate the effects of a car bomb. Ludicrous stuff.

RELATED: I Took A $400,000 Lamborghini SUV To A $2 Bunnings Sausage Sizzle & This Is What I Discovered 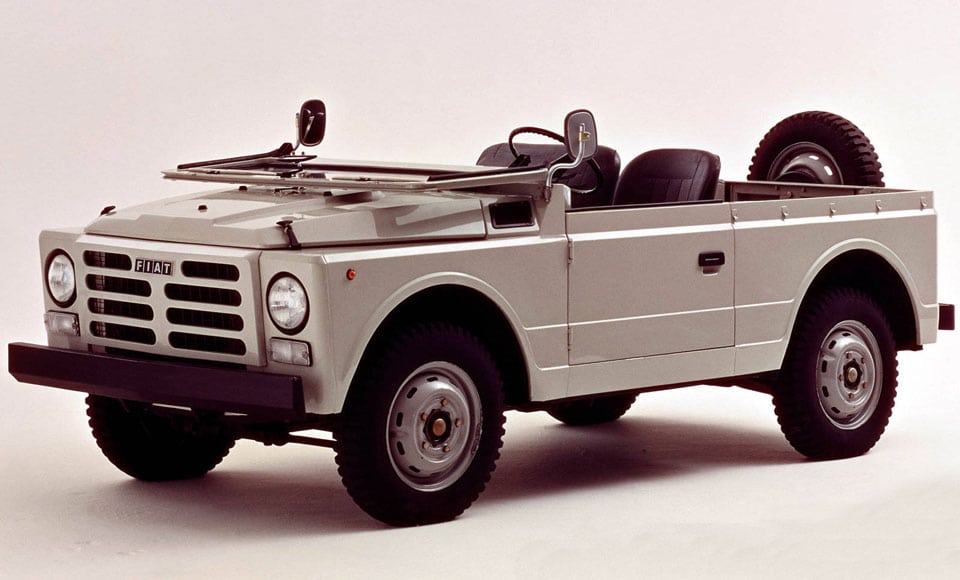 If you find the idea of Lamborghini making a military vehicle hard to wrap your head around, maybe you’ll find the idea of Fiat making one a little easier to understand. Like many 4WDs, the Campagnola was inspired by the Willys Jeep, and saw service with the Italian military as well as many civilian buyers – but it never really took off outside of its home country.

The second-generation Nuova (i.e. “New”) Campagnola represents the second generation of the light off-road vehicle produced by Fiat. Featuring a boxier, less Jeep-like appearance than its predecessor, the Nuova Campagnola is perhaps most famous as the Vatican City’s resident Popemobile. Indeed, it was in a Nuova Campagnole that Pope John Paul II was victim of an assassination attempt in 1981. That Campagnola is now in the “carriage museum” of the Vatican City. 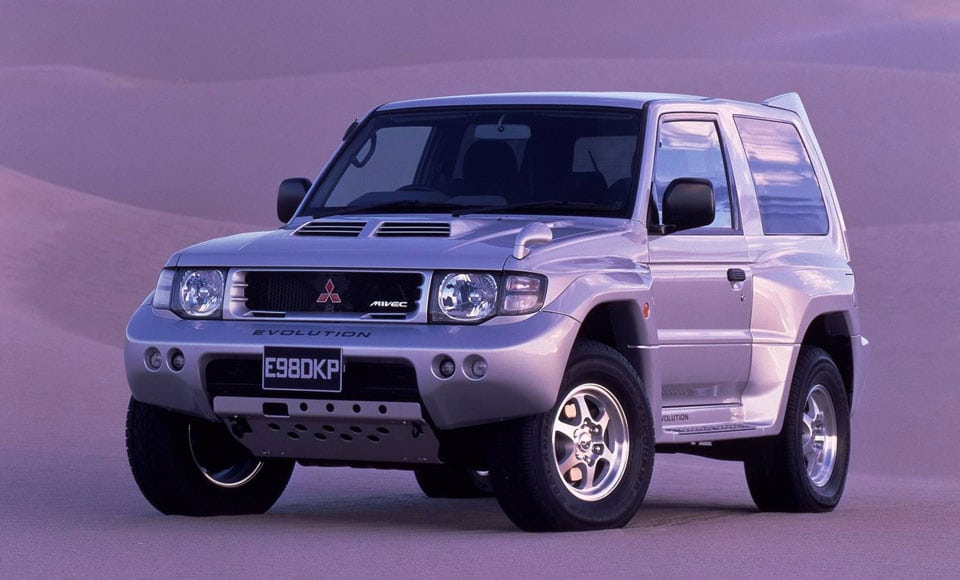 You could argue that a 4WD from 1997 isn’t exactly a ‘classic’… And we’d counter that by saying you should stop being in denial about getting old – it crosses the 20 year mark, it’s a classic. It’s also a bloody bonkers car that we can’t believe mere mortals were allowed to buy.

A road-legal homologation model produced by Mitsubishi so they could take on the Dakar Rally’s hard-fought T2 class, the ‘PajEvo’ is based on the second generation Pajero but had many features unique to the model, including a significantly bigger 3.5L V6 engine, skid plates, mudflaps, beefed-up suspension and diffs, as well as a very 90s body kit with huge fender flares and two rear spoilers. Approximately 2500 units were produced, virtually all of which were only sold in Japan.

As it stands, the Pajero Evolution decimated its competition by winning their class and the entire race altogether, beating out much quicker opponents in the T3 class. These days, they’re rare as hen’s teeth, and for good reason: it’s a seriously impressive off-roader even by modern standards, and it looks sick. Good luck finding one outside of Japan, though.