Getting David Beckham to support your brand is basically winning yourself the license to print cash. From whisky to watches, the man is bankable.

He’ll also go the extra mile when it comes to promoting your product, as his most recent advertisement for Tudor demonstrates.

A few hours ago, the 45-year-old football legend shared a brilliantly cheesy photo of himself on Instagram, making mulled wine in anticipation of Christmas, all smiles as he stirs the pot. He’s also flexing a Tudor Black Bay Chrono S&G (ref. M79363N-0002)… Which he’s wearing upside-down so that we lucky watch fans can get a good look at the thing. The ‘People’s Rolex‘, indeed.

We don’t know if this is ultra-considerate, weird as hell, or if he’s just accidentally put his watch on the wrong way. We hope it’s that first one. 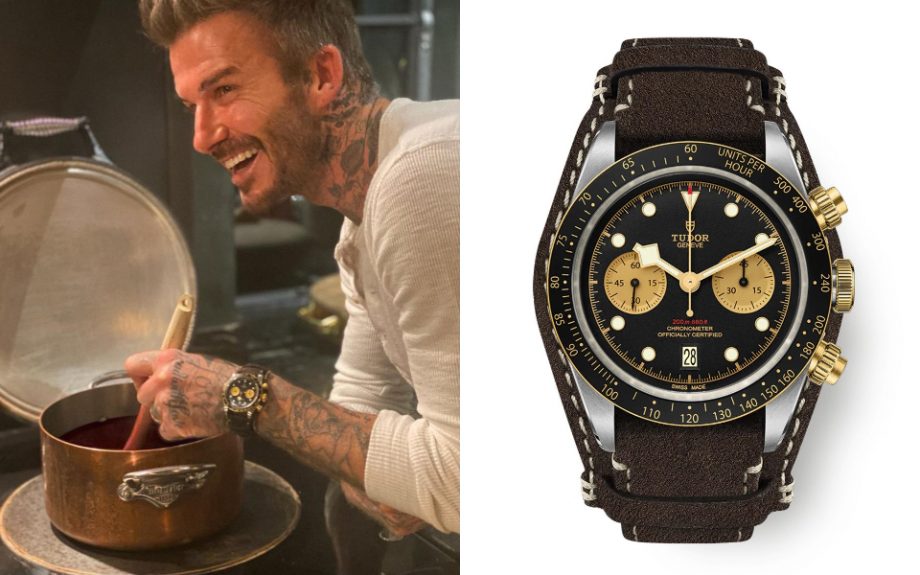 The Black Bay Chrono S&G is an unusual watch that not only blends the Black Bay’s diving heritage with the motorsports-inspired functionality of a chronograph but also blends steel and gold. It’s certainly distinctive, and unlike any other watch in Tudor’s (or even its big brother Rolex’s) lineup. For 7,900 AUD, you can get the Black Bay Chrono S&G with either one of Tudor’s famously comfortable fabric straps, or an innovative leather strap that features a removable ‘bund’. A two-tone steel and gold bracelet jacks the price up to 9,540 AUD.

Bund straps, first worn by German pilots in the 1930s (‘Bund’ being an abbreviation for Bundesrepublik Deutschland, or the Federal German Republic in English) feature a protective leather backing and look almost like mini trouser belts. It was a purely functional innovation: the leather backing meant that pilots wouldn’t be scalded or frozen by the metal caseback of their watches when flying… Plus the leather has the added advantage of absorbing extra sweat and protecting the watch from moisture ingress.

Bund straps saw a style revival in the 60s and 70s, in no small part due to the influence of Hollywood heartthrobs (and well-known figures in the watch world) Paul Newman and Steve McQueen. These days, bund straps are a rather controversial style choice, the horological equivalent of Crocs. But a retro-inspired two-tone watch like this Tudor suits the bund pretty well, we’ll admit.