What you wear on your feet can make or break your look, blah blah blah. You’ve heard it all before and you probably don’t want to hear it again, so we’ll fast-forward to the important part – a men’s dress shoes guide.

Dress shoes are not created equal. They cannot all be worn anywhere, with anything. Which means that, if you think you can drop serious cash on just one pair that will be a multi-purpose purchase, you’ve got an unwelcome surprise coming.

Depending on the occasion and the wardrobe you’re wearing them with, some dress shoes are more suitable than others. Read on to learn about common kinds, what to look for in men’s dress shoes, and how to select the right one for your next upscale affair, where sandals simply won’t cut it. 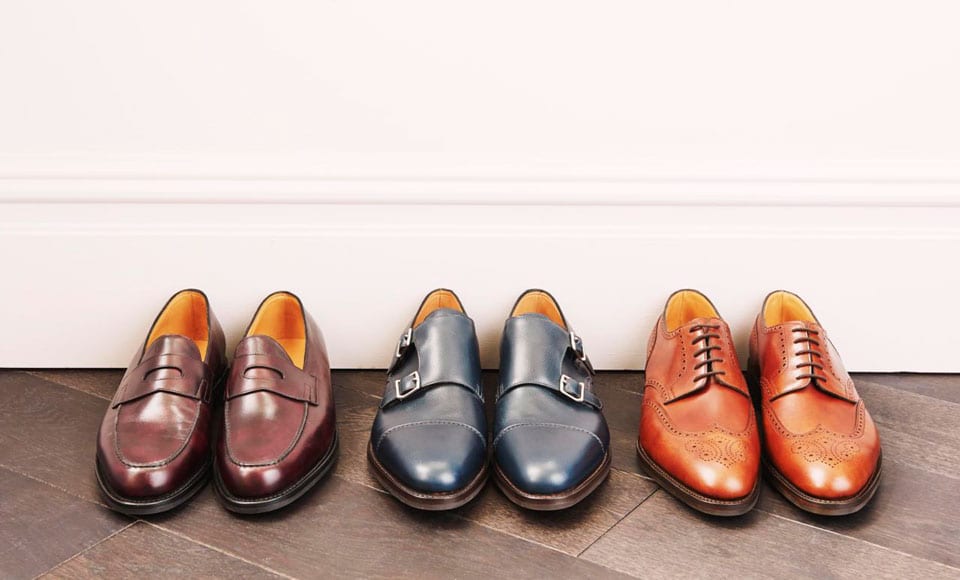 An educated and sartorially-inclined gentleman like yourself is well aware that he has many different types of dress shoes to choose from, but these are six of the most popular styles to suit up or go smart casual with. 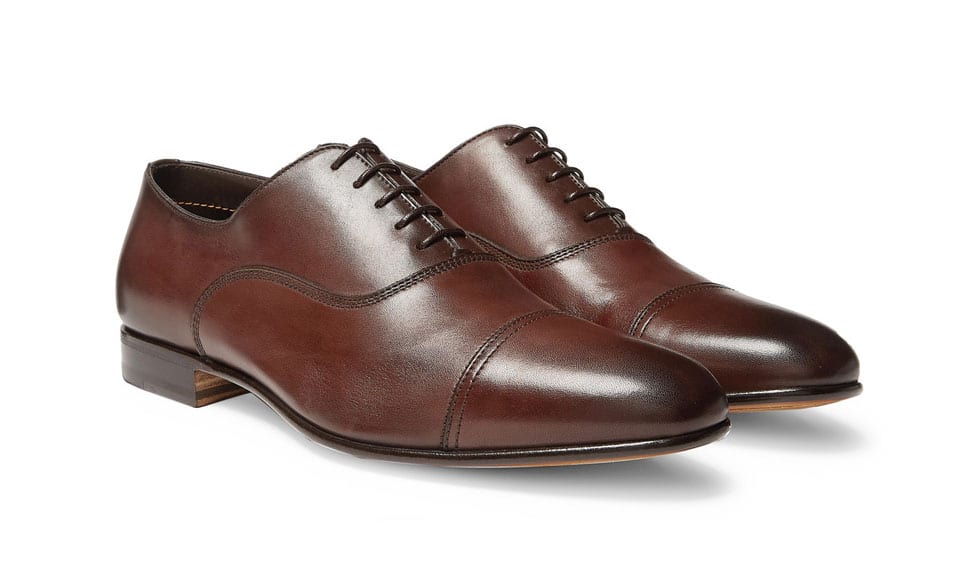 Oxfords take the top spot at the most formal end of the dress shoes spectrum. Also known as Balmorals, Oxfords are (typically) leather shoes with a low instep and a thin, non-rubber sole. Their most distinguishing characteristic is closed lacing, which is what makes them your most elegant option. Cap-toes are a common embellishment for Oxfords, but keep in mind that the sleeker the shoe, the more formal it is. 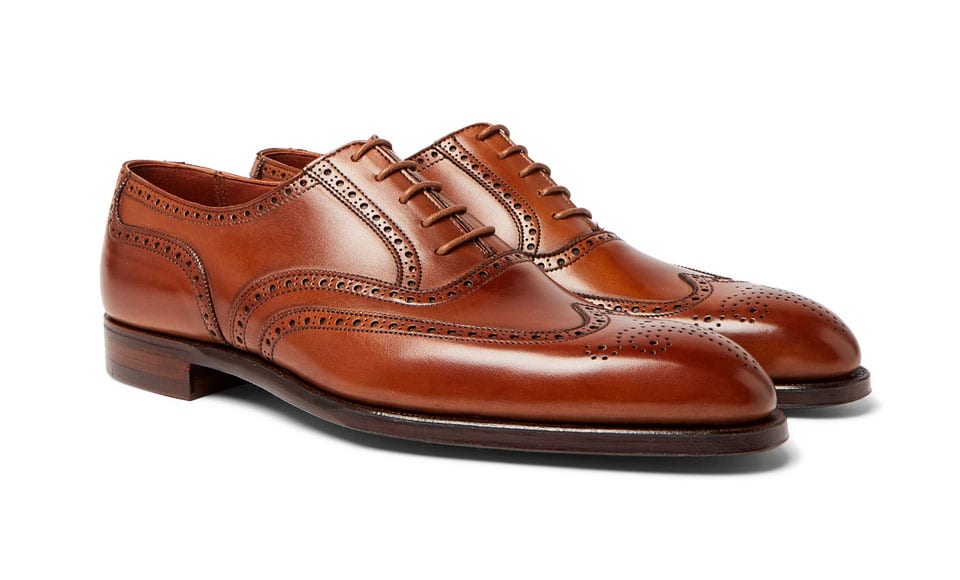 Take a leather dress shoe, add decorative stitches, perforations and serration across the top, and you’ve got brogues. Brogues are most commonly found in one of four closure styles (Oxford, Derby, ghillie, and monk) and four toe cap styles (full or wingtip, semi-, quarter and longwing). Some might call it confusing; we prefer to think of it as versatile. If you’re abiding by tradition, the more broguing a shoe has, the less dressy it is. 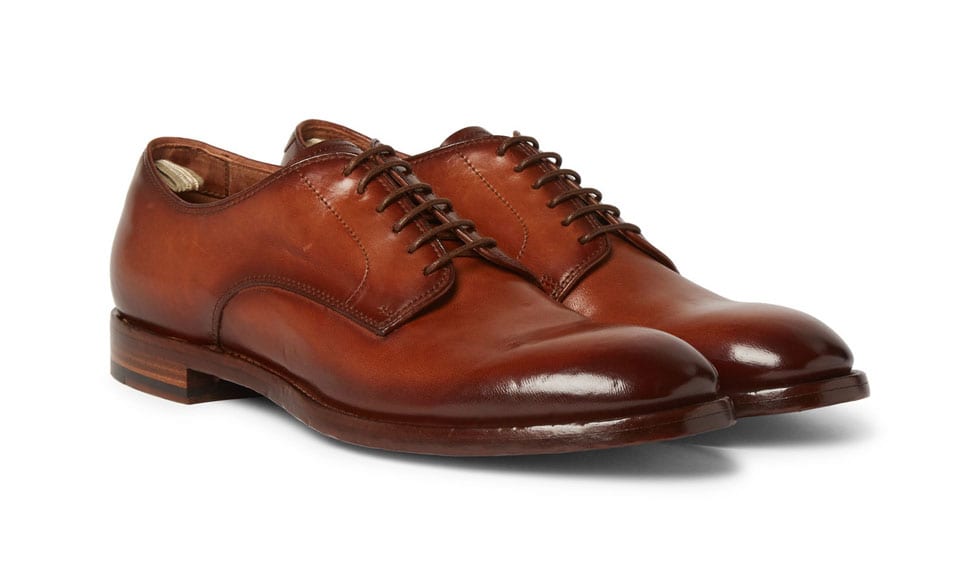 The Derby is very similar to the Oxford, with one key difference: the lacing is sewn outside of the shoe. This method creates visible flaps, which are less formal than an Oxford’s closed lacing. Derby shoes (sometimes called Blüchers) can come in a variety of colours and materials, and a range of styles (brogue and non-brogue, wing-tipped, cap-toed, etc.). They’re less appropriate for wearing with your most refined tailoring, but perfect for smart-casual attire. 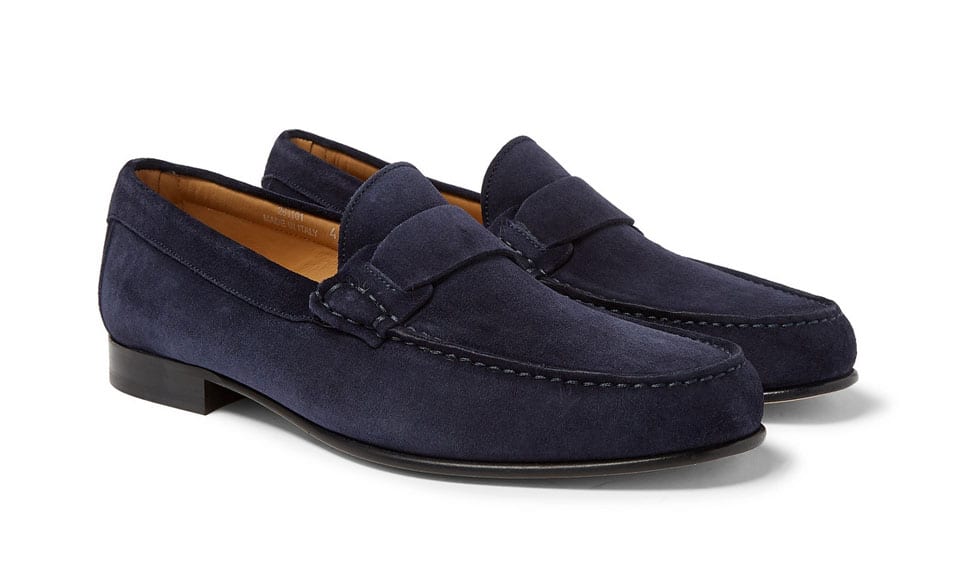 Loafers can be either dressy or sporty, but all have one distinctive feature: a lack of laces or buckles. The classic loafer is a slip-on shoe, often with moc-toe construction, with a wide, fairly flat heel. Decorations can include tassels, metal “snaffles,” or the leather strap of penny loafers. As per usual, the sleeker and simpler designs are the most formal, as are darker colours. Make sure you wear socks with your loafers unless the occasion is very casual. 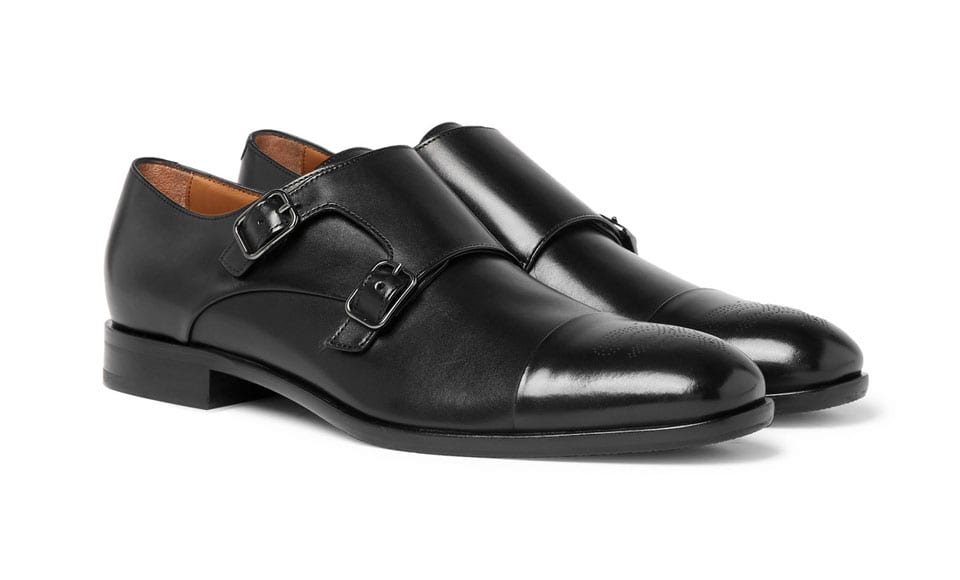 Anything named after a religious ascetic doesn’t sound like much fun, but monks buck the trend. Like a loafer, monk strap shoes don’t have laces. Unlike a loafer, monk strap shoes aren’t just slip-ons – instead, they’re closed via a leather strap and metal buckle on the upper portion of the shoe. One, two, and even three-strapped versions are available. Monks are ideal for the man who wants to draw attention to his unique tastes. 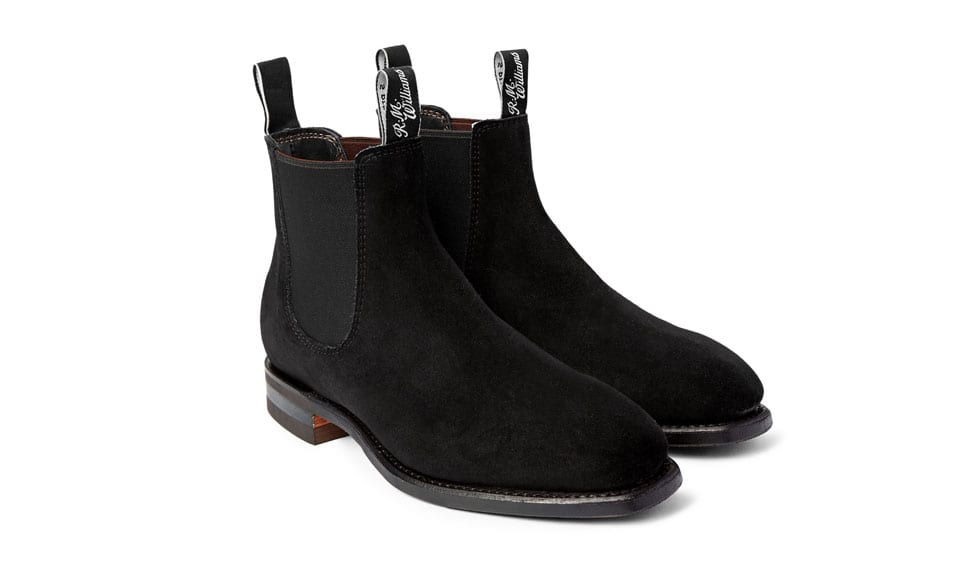 Put the hefty combat boots down. We love them too, but they’re not appropriate for a formal occasion. Opt for dress boots instead, which are slim, sleek and snug, often with a slight heel. Dress boots are typically ankle-length and come in many styles (the usual brogue, wingtip, cap-toe, etc.). The conventional rules apply: more details are less formal, fewer details are more formal. Wear them with dark denim, dress trousers or a casual suit. 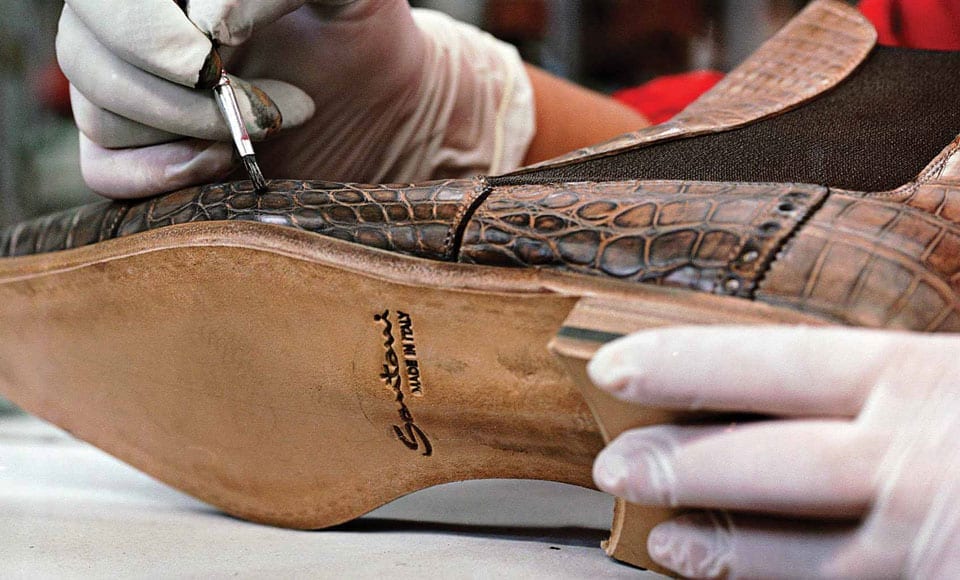 We’re open-minded here at DMARGE. We like to think that all constructions, colours and materials have their place, and we know that much of it comes down to personal taste. That being said, there are a few points of decorum one should keep in mind when choosing which shoes to don on a particular day.

Glossy leather is the most foolproof choice. It’s as elegant as it gets, and can be worn anywhere that requires a suit and proper comportment. Take the shine out of the leather and you have a less formal, but still dressy, shoe. Suede brings the formality down yet another notch, but still looks smart.

After that, the leathers get exotic and experimental. The sky is more or less the limit, but please don’t slaughter anything endangered in the name of fancy footwear. Unusual skins run the gamut from alligator to ostrich, with all manner of reptiles, mammals and birds in between.

How To Spot Quality 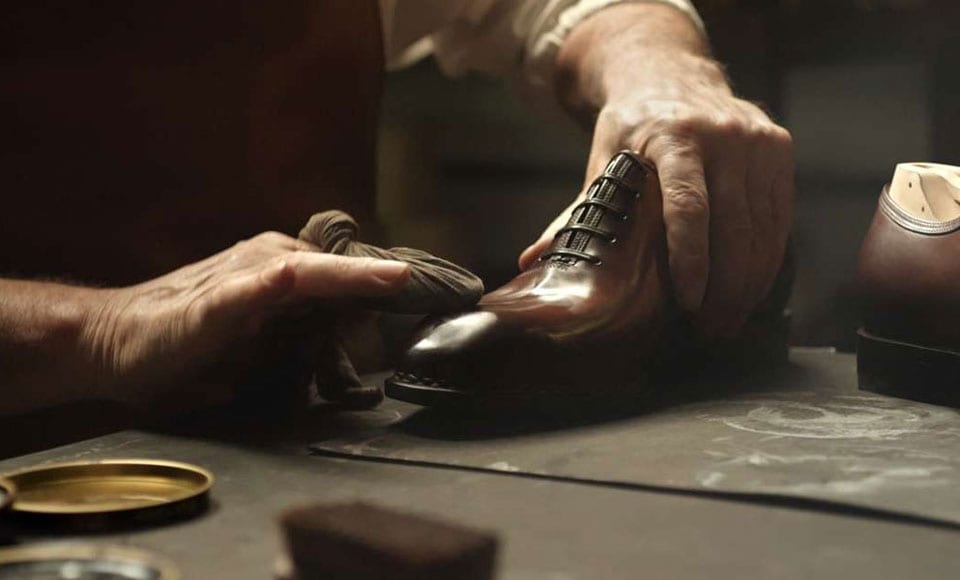 Listen up gents, because this is important. Your shoe collection should be about quality over quantity, unless you’ve just robbed a bank and are looking to blow all the cash before you’re caught. Cheap dress shoes are fine for short term wears but you’re far better off choosing a more expensive shoe that’s built to last than 10 shoes you fished out of the bottom of a bargain bin.

So how do you know what’s quality? It’s all in the construction. Look for: 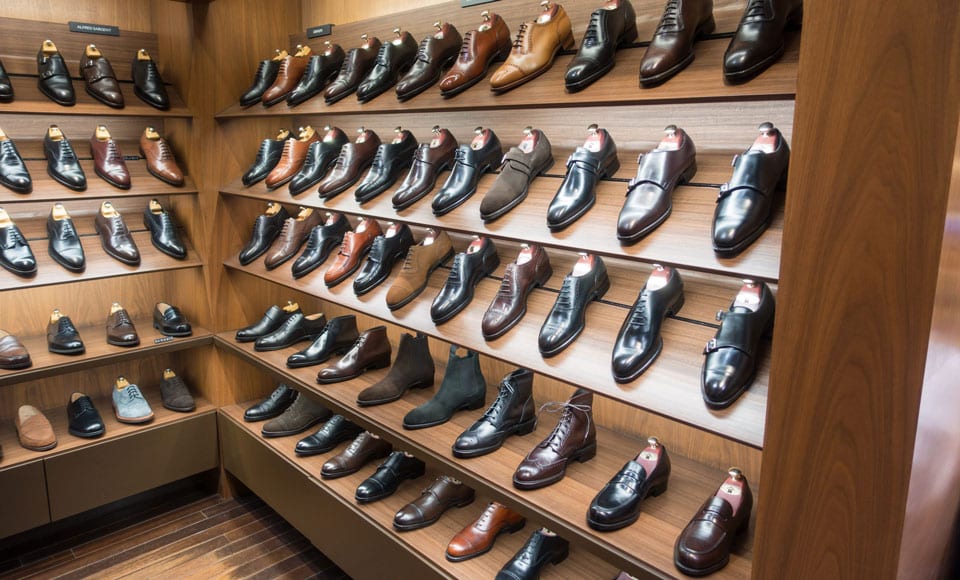 Fear not. We won’t eject you into the world to blindly search for the aforementioned qualities. Instead, we’ll gently point you in the right direction and send you on your (well-educated) way. We highly recommend these three fail-safe men’s dress shoe brands:

John Lobb has been in business since 1849, and its shoes are still handmade the traditional way. 190 steps and several weeks go into the production of each pair, which have been cherished by kings, entertainers, politicians, business moguls and more. Today John Lobb proudly holds two Royal Warrants to His Royal Highness The Duke of Edinburgh and His Royal Highness The Prince of Wales.

Originally known under the family name of Albaladejo, Carmina has been making exceptional shoes in Spain since the 19th century. All Carmina shoes are made by a team of skilled craftsman using the traditional Goodyear stitching technique, a process that takes 15-20 days. Now one of Spain’s largest shoemakers, Carmina has shops in Paris, Barcelona, Bilbao, Valladolid, Palma de Mallorca and Madrid, and can be found in various retailers around the world.

World-renowned English shoe manufacturer Grenson has been designing and manufacturing footwear since 1866. Founder William Grenson was the first producer in the world to use the Goodyear welting construction method, now a hallmark of all exceptional British dress shoes and still employed at Grenson today. From working out of a cottage and outfitting soldiers in both world wars, Grenson has come a long way to be consistently ranked as one of the top English shoe brands.

How To Dress When You Suffer From The Dad Bod

How To Wear Brown Shoes With A Black Suit Or Trousers

The Snapback Remains King Of The Street & Luxury; Here's How To Wear It

How To Dress Down A Suit For Casual Occasions