How To Wear The ‘Smart Casual’ Dress Code For Men

Welcome to the revolution of ‘smart casual’ 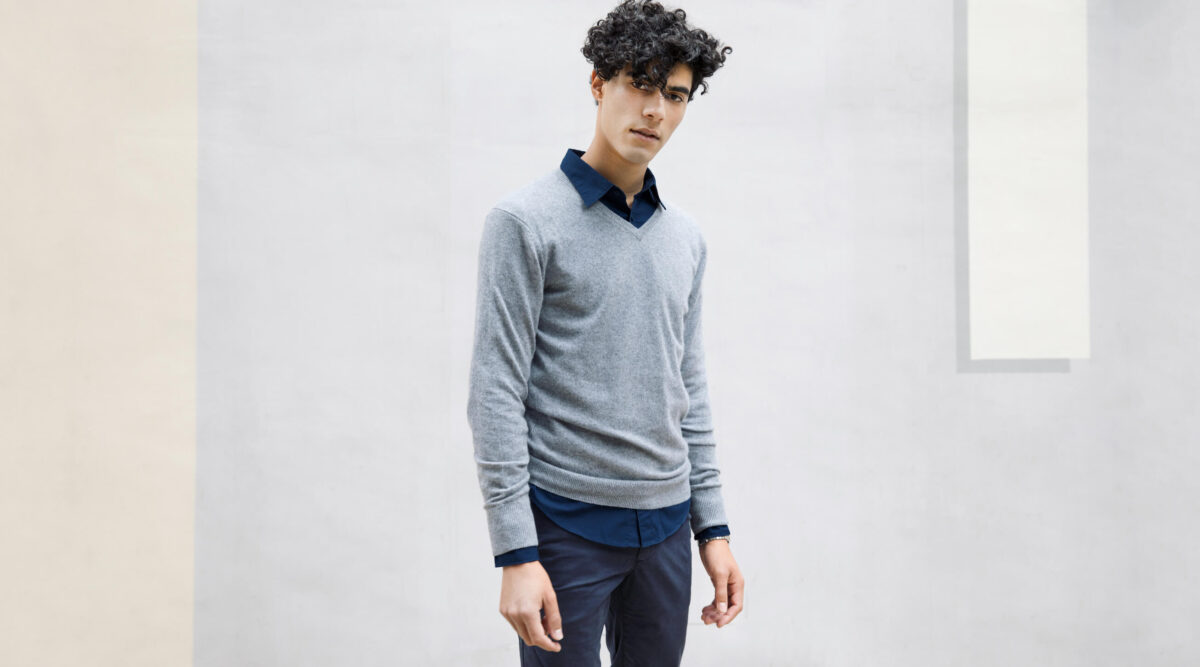 Of all the questions to keep us up into the early hours of the night, it’s the eternal quandary of just what the hell ‘smart casual’ means. And to be honest, our anxiety isn’t unfounded: the Macquarie Dictionary defines smart casual as “well-dressed in a casual style” (whatever that means).

Oxford defines it as “neat, conventional, yet relatively informal in style”. Urban Dictionary gets warmer, offering the incisive description that smart casual is a “nonsensical dress code that people slap onto events, parties, and workplace which always causes confusion and often spectacular results”.

So yeah, it’s safe to say no one really has a clue, but that doesn’t stop guys from asking the age-old question.

So what’s a guy to do? Instead of surrendering to looking like duds, we’ve decided to break down this nebulous term and demystify it for the confused public (and our own good). Here, we go through the common elements of the smart casual dress code piece by piece, so you can get at least one thing right in your life.

What Is Smart Casual?

Smart casual might be meaningless, but that doesn’t mean you’re off the hook entirely. This confusing no-mans-land is about finding the middle of both ends of the formality spectrum. Like what those affluent private-school snowflakes who go to yoga eight times a week say – everything here is about balance.

Ultimately, as the very naming of the dress code implies, smart first, casual second. When in doubt – and this should apply to all areas of your life – play it safe and dress on the smarter side. People say it’s better to be overdressed than underdressed for a bloody good reason.

Now that we’ve cleared that up, we’ll break down the wardrobe staples to give you an idea of what will and won’t look the part for the smart casual dress code. 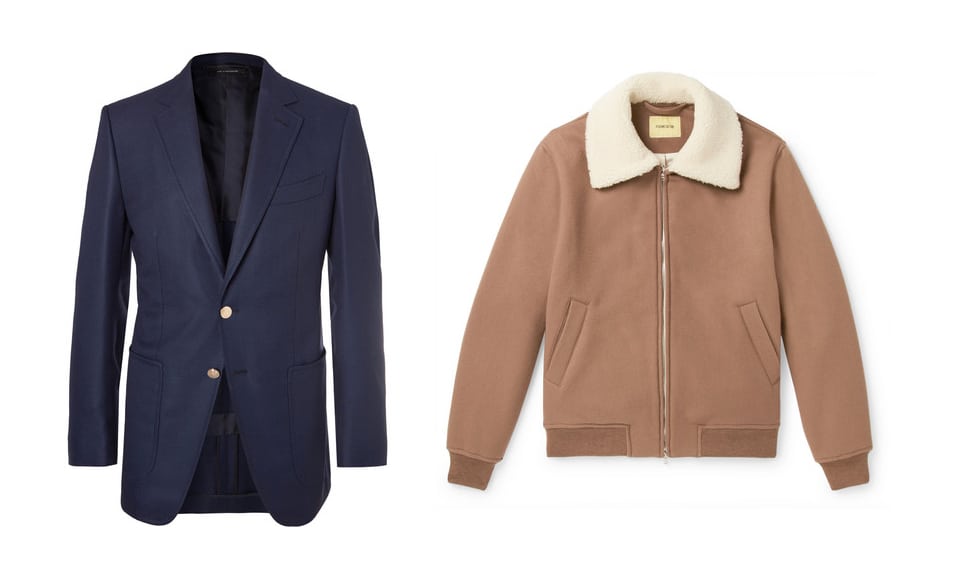 It’s better to be overdressed than under, but suits are a no-no. Blazers, however, should be a staple if you want to lean on the smarter end of the spectrum.

Cotton-linen blends are the thinking man’s option for the warmer months (linen on its own can be fragile), while wool or wool-silk blends should be worn in winter. Go for unlined, soft-shouldered jackets with patch pockets, and functioning buttons to roll the sleeves a little if it’s hot.

Bomber jackets and trench coats are also totally acceptable when it comes to smart-casual too. Perhaps a striped t-shirt underneath and neatly pressed trousers. Yes, now you’re talking.

You’ll get more mileage out of plain colours, but don’t be afraid to experiment with bolder shades of blue, burgundy, tan or the odd pattern here and there. Just don’t go overboard with novelty colours, neon, or obscene statement prints someone could spot from the other side of the bar. 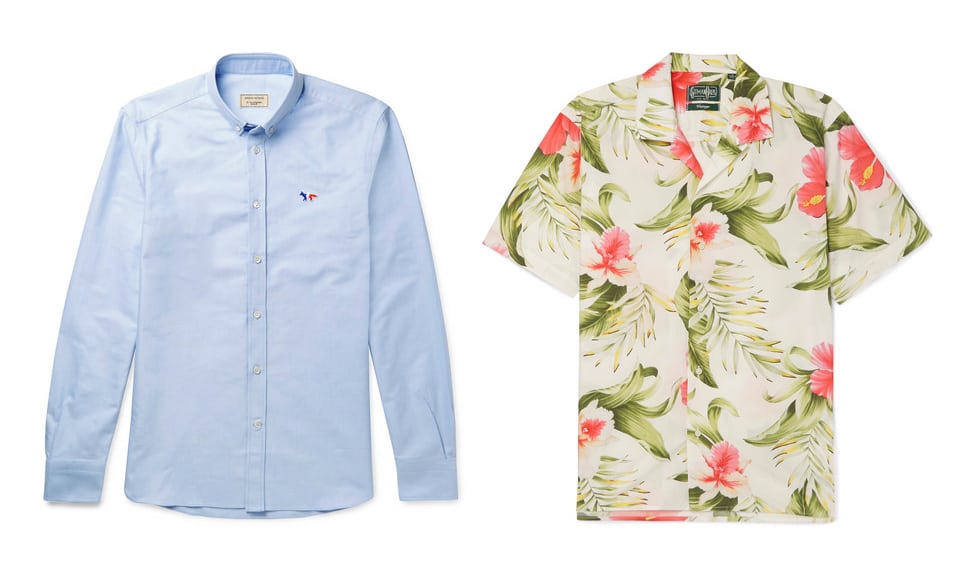 Keep it crisp or add some colour

A single-colour shirt in a traditional hue is a safe option, but it certainly isn’t your only option. Patterned shirts (stripes or fine houndstooth, for example ) or even printed shirts, bring personality to a look and can be balanced out with more classic pieces elsewhere if you’re concerned about going over the top. Hell, even printed shirts are totally okay these days. Just don’t combine too many colours.

Do you need to tuck it in? If it’s designed with long shirt tails, yes. If not, then no. But if you’re wearing a jacket, you should always find a way to keep your shirt tucked in, unless you want to resemble a fourth-rate DJ from the mid-2000’s. 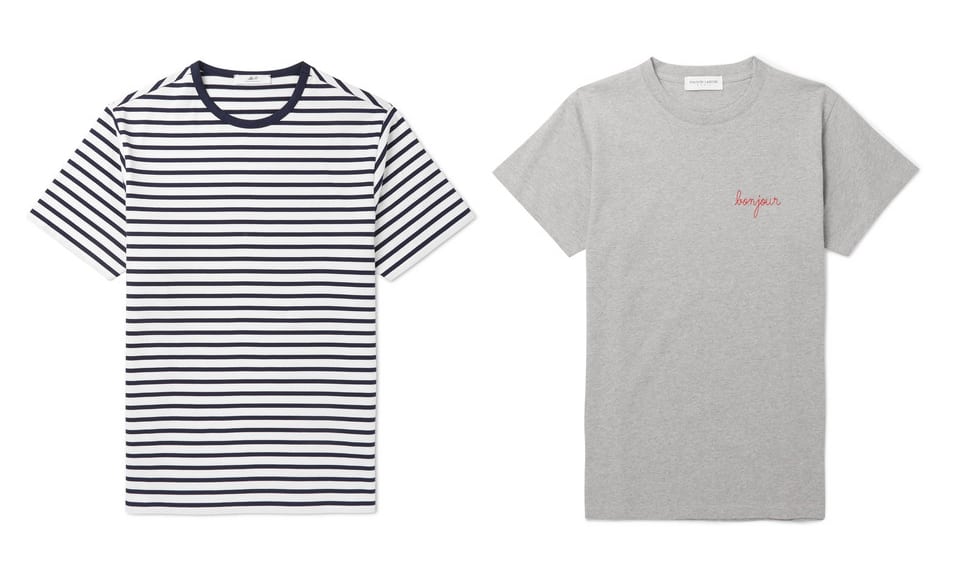 Lazy? You can also ditch the button-down entirely.

A t-shirt is a perfectly acceptable part of a smart-casual wardrobe, but be sure you stick with the basics only. Go for a crisp, fitted tee with a crewneck. Avoid thin, wispy fabrics, because no one is interested in the dimensions of your nipples. If you only take one thing away from this, remember to avoid V neck tees unless you are committed to the idea of being known as one of ‘those guys’ at the pub. 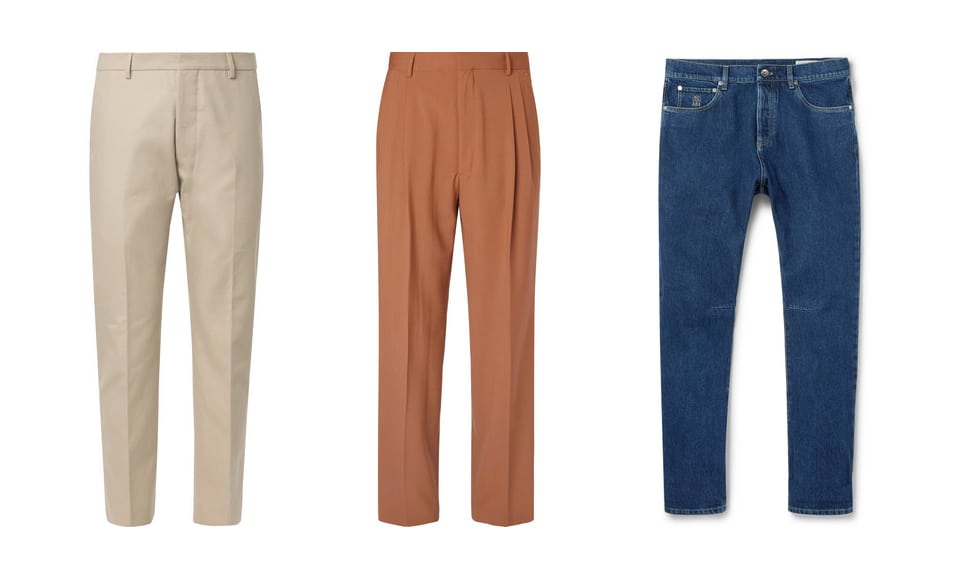 Trousers or denim is okay… even wide-legged is cool

As with your upper half, when it comes to putting on some pants, you can take advantage of the more casual nature intended for your outfit. This means you can forget wearing suit pants or formal trousers entirely and buy some chinos or a pair of jeans instead.

There are still some rules to abide by, however. Keep them fitted, in a subdued colour or a neutral, and keep them on the shorter side to prevent any ugly folds over your shoe. And while there’s some casual leeway, that doesn’t extend to anything ripped – you’re not in a Pearl Jam cover band or going to a music festival.

If you decide to wear jeans, you should look to be wearing darker shades of blue, or go for black jeans, and be sure to avoid rips to ensure you keep with the ‘smart’ part of the casual. Ideally, pair your denim with a shirt or t-shirt and a blazer. 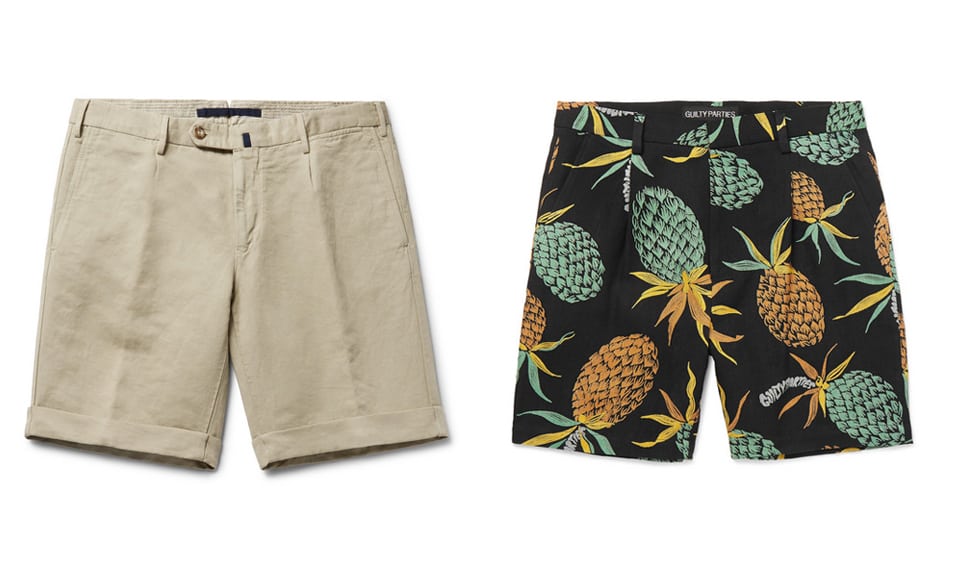 Go plain or printed just keep things above the knee

With shorts, it’s probably easier to tell you what to avoid. Boardies, cargo shorts, anything below the knee, and anything you could be seen playing sport in should be firmly ignored.

Go for something tailored, to show you’re putting in a bit of effort, in a cotton or cotton-linen. Chuck in a pattern if the rest of your outfit is plain, but otherwise keep it simple with navy, grey, or cream. And we did say keep them tailored, but they shouldn’t look like retro footy shorts where beans contour reigns supreme. 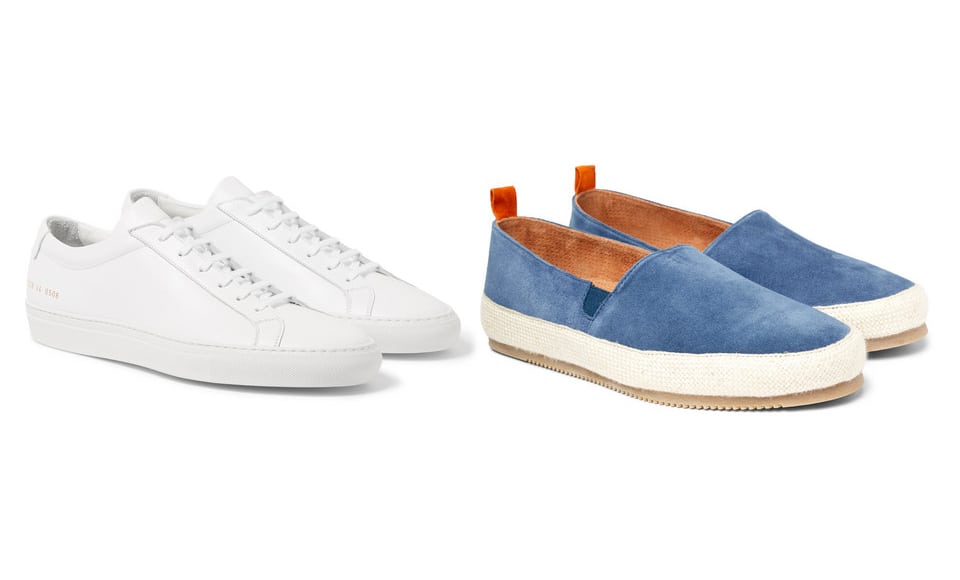 Unlike cocktail dress (smart casual’s older, aloof brother) shoes are less of a problem. You can get away with a lot, but not quite everything. The rule is to keep them harmonious with the top half of your outfit. Don’t wear oxfords with shorts and a linen oxford shirt, for example.

The nature of the event will certainly dictate the style of footwear you can get away with. If it’s a fried’s 30th birthday, then, by all means, wear a pair of clean, minimalist sneakers. If you’re headed to a wedding, however, then you’ll need to wear a pair of smart casual dress shoes instead.

And you might want to think about avoiding Converse All-Stars with chinos and a blazer. Anything from tennis shoes and suede derby’s to monk straps and loafers all fit the ticket – provided they’re clean and not scavenged in a frenzy from the bottom of a clearance tray.

You probably know better already, but remember that shoes make or break the outfit and you’ll be judged on their merit even if you’re wearing a Rolex and shouting everyone beers. 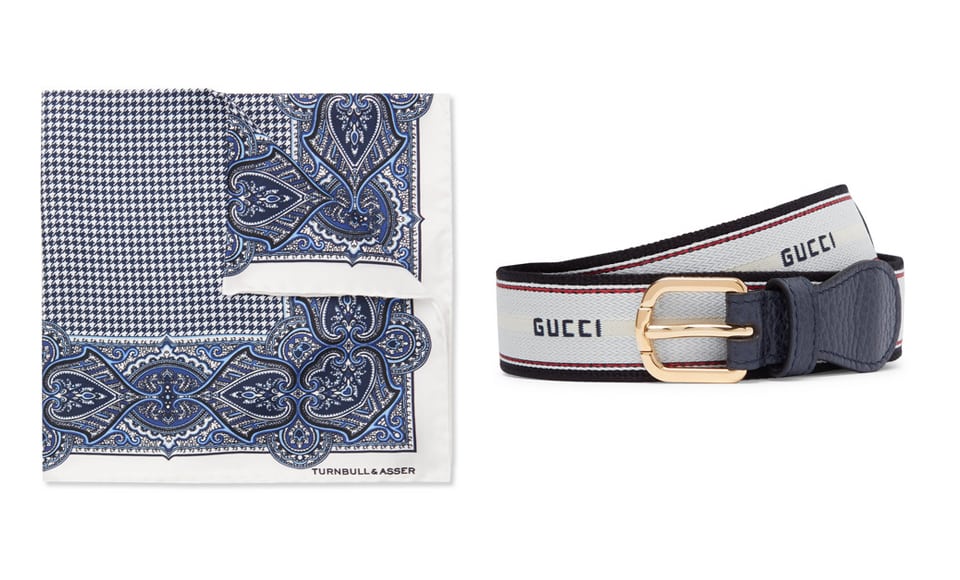 Ties are optional, but to be honest, we can’t foresee a smart casual event that ever screams out for one. Leave it at home and bring a pocket square instead to add some colour. Coordinate it with your shirt, ensuring you avoid hankies that are too bold or contrived.

You’ll also want to be sure you add a belt into the mix. You don’t necessarily need the fanciest full-grain leather belt from a high-end designer brand, since you can certainly play around with materials, such as woven and textile belts.

Sunglasses for the daytime are a must (especially if your conversation partner is a bit dull and your eyes wander). Tortoiseshell is the best pick for individuality, but conservative black or brown frames are fine if the rest of your outfit has plenty of colour.

You should also look into investing in some pieces of jewellery. A simple leather bracelet or a sterling silver signet ring can instantly transform a perfectly passable smart casual outfit into one that will help you stand out and be the subject of gossip the following day.

And remember, lads, never leave the house without a good smile and a courteous attitude. They’re the best accessories you can bring.

What is smart casual?

In its most basic form, smart casual dress code refers to pieces that are less formal than suits and black tie, yet not as casual a t-shirt, shorts and outlandish, colourful sneakers. A simple smart casual outfit for beginners would be a clean oxford shirt, dark jeans and a pair of clean, minimalist sneakers.

Is a t-shirt smart casual?

Yes, you can wear a t-shirt as part of a smart casual outfit. Just be sure it fits well, and if possible, tuck it into your pants.

Yep, polo shirts can definitely be considered smart casual if they're not too colourful or have large prints and patterns on them. Both short and long sleeve polo shirts in single block colours such as navy, black or burgundy look great when paired with jeans or chinos.

1 of 22
A shirt with a cropped field / trucker jacket with trousers. 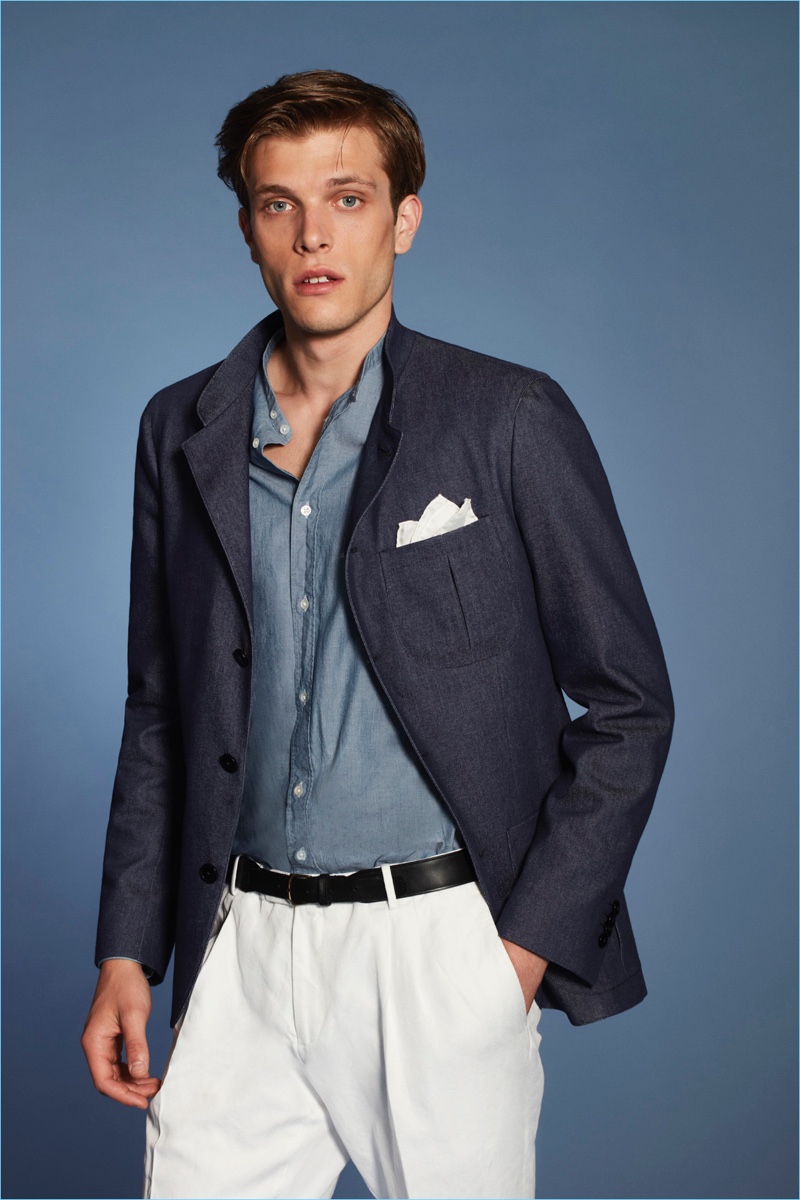 2 of 22
The classic look with open collar shirt and blazer with white trousers. 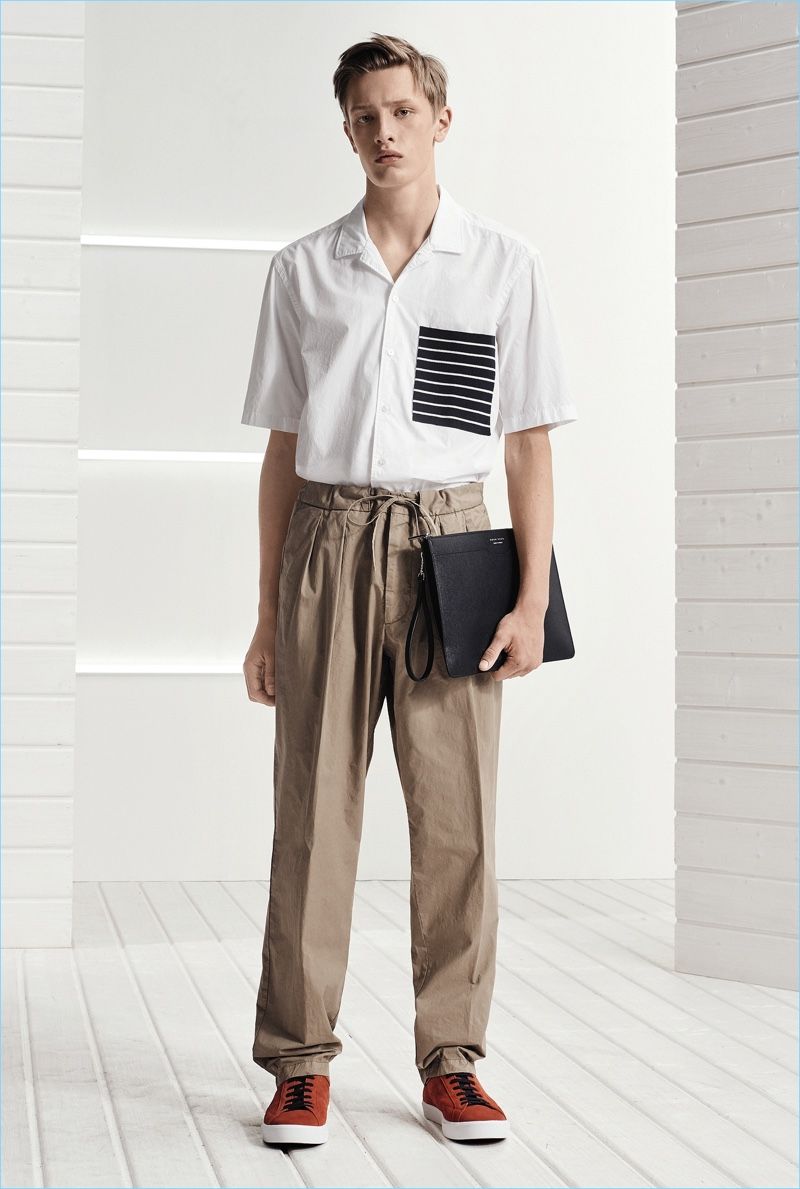 3 of 22
Modern smart-casual is drawstring trousers and a camp collar shirt. 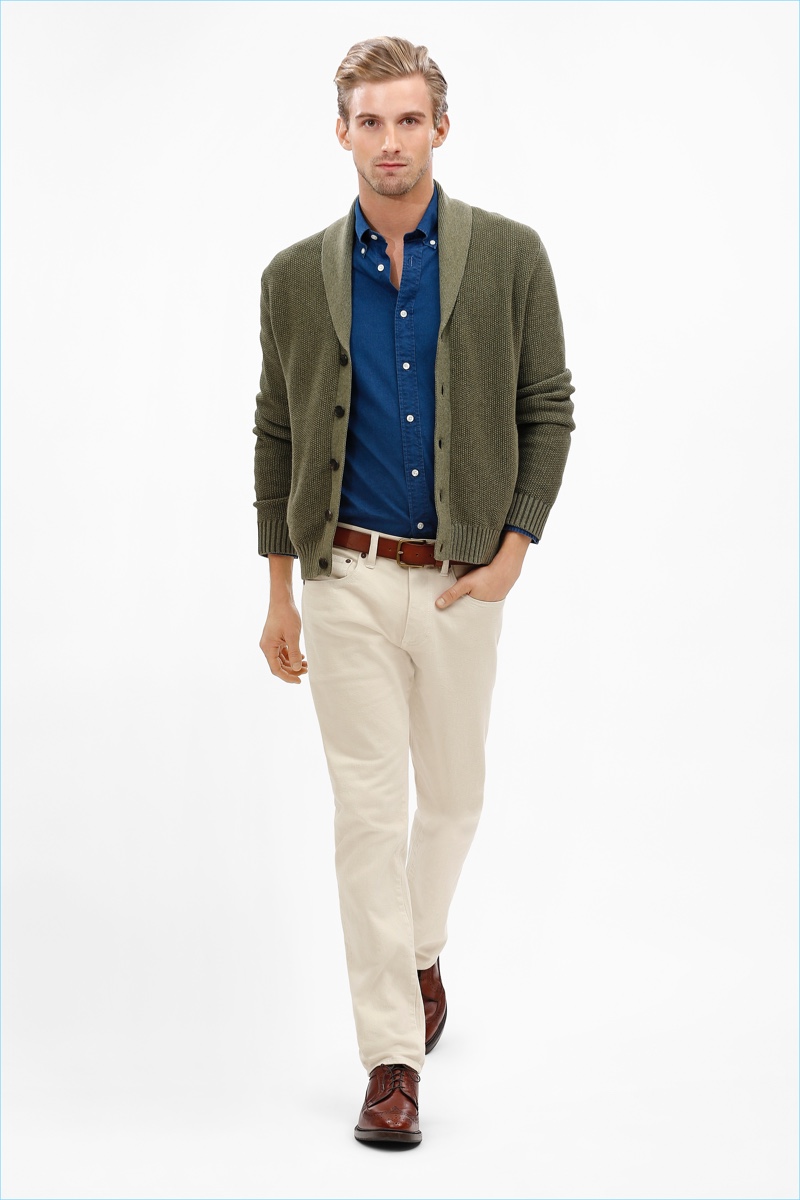 4 of 22
Chinos, shirt and a bomber jacket is a favourite for many. 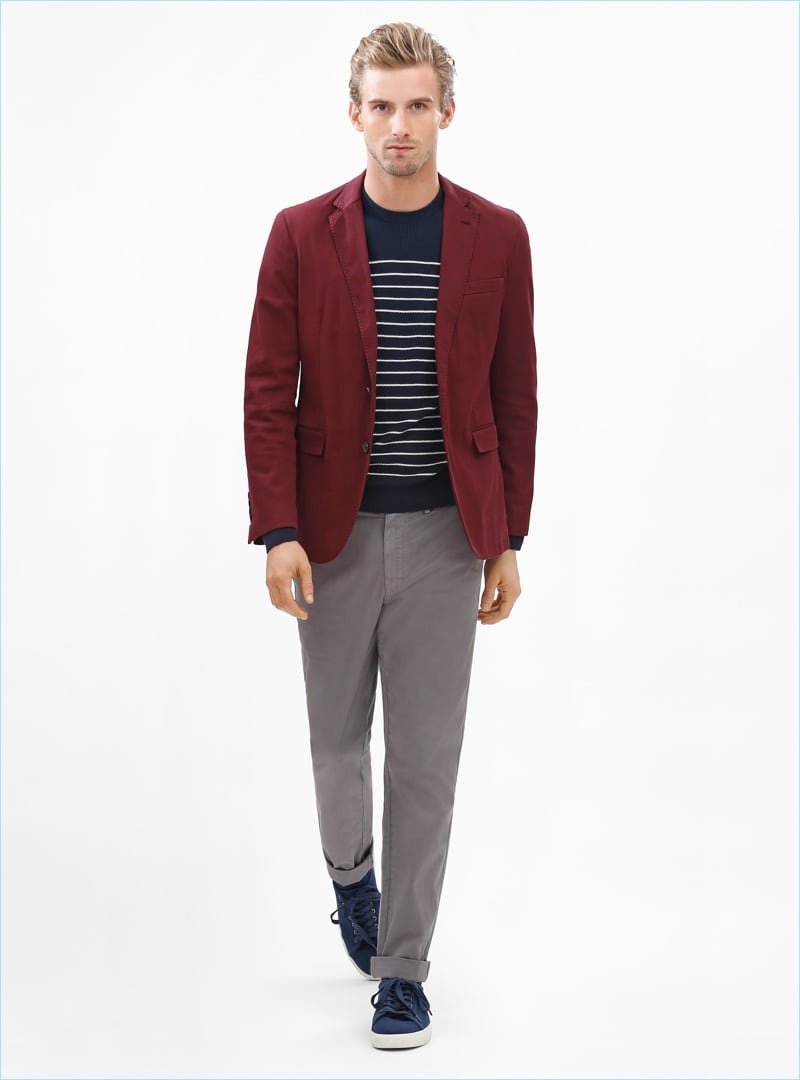 5 of 22
Or the blazer and chinos with a striped t-shirt.

6 of 22
In colder months opt for a heavy jacket and t-shirt with trousers. 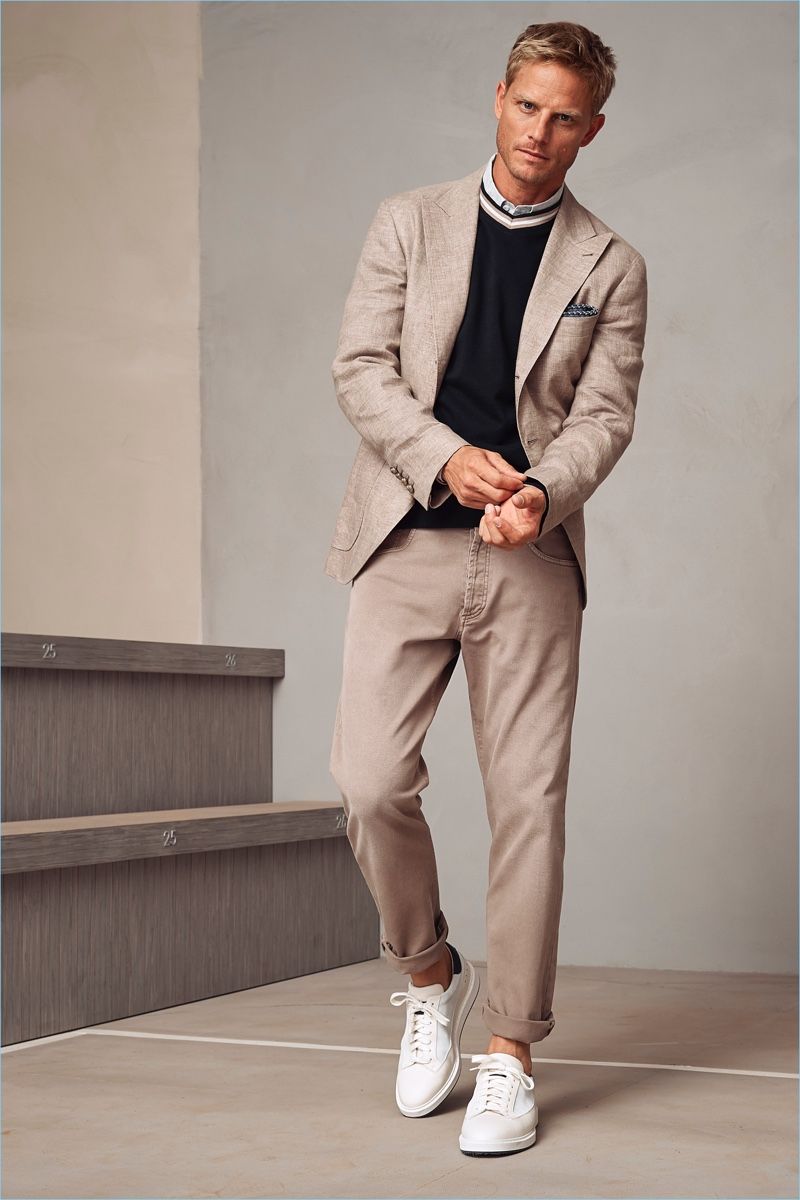 7 of 22
Try wearing your suit with sneakers and a t-shirt. 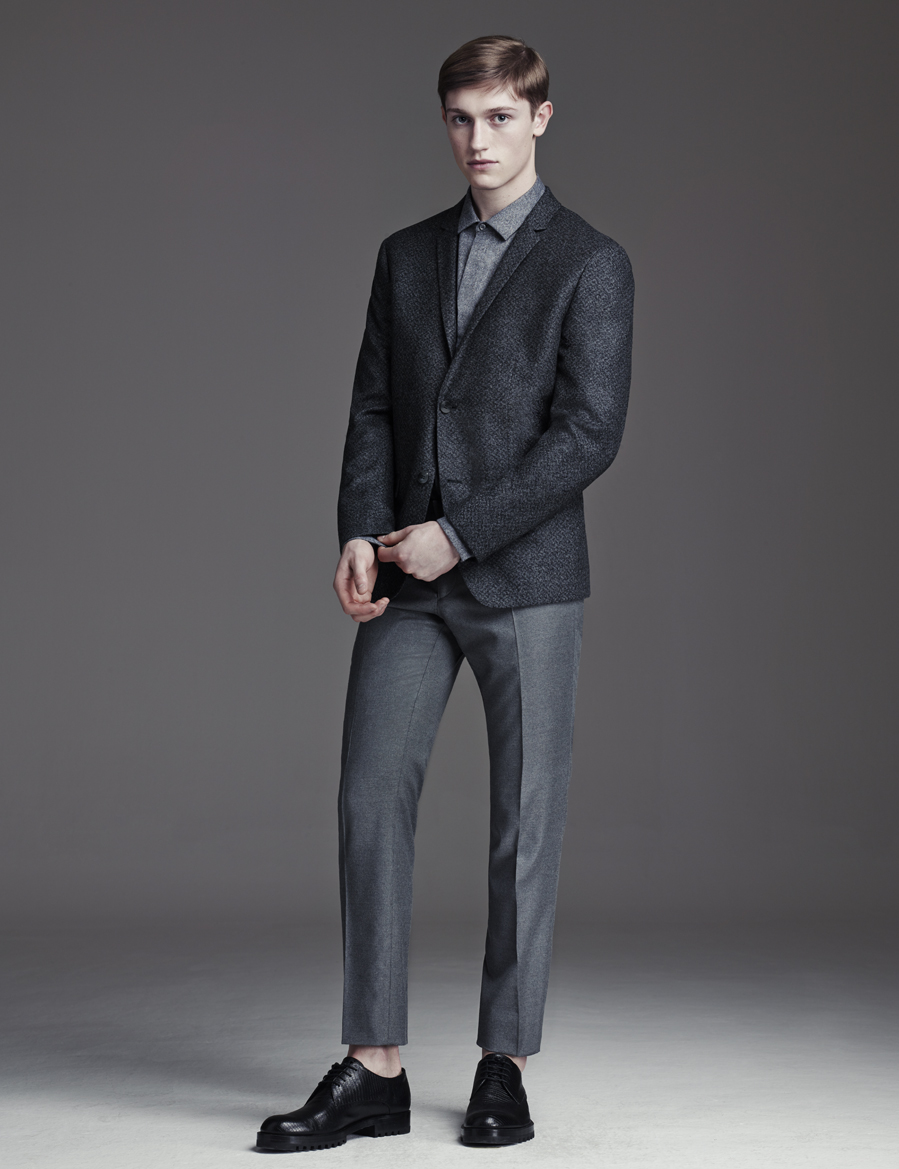 8 of 22
For the smarter end of the spectrum go trousers, blazer and a buttoned up shirt. No tie though. No socks is okay too. 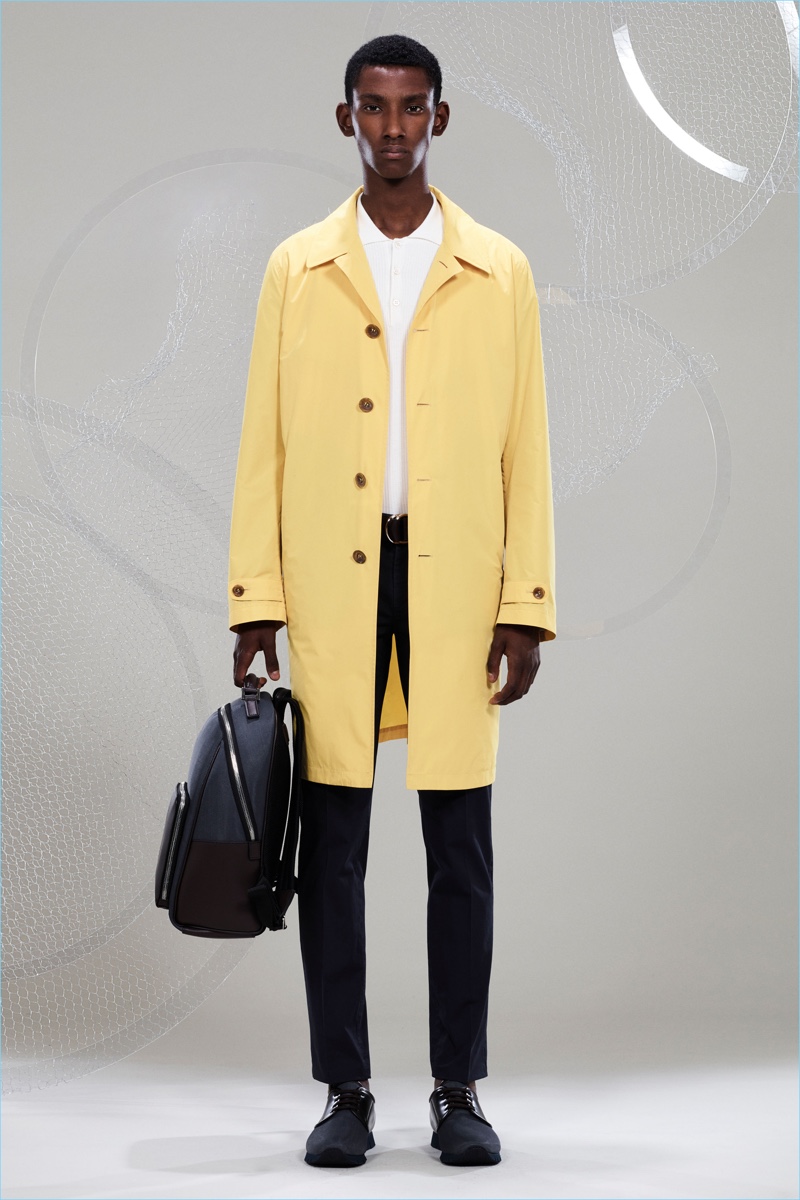 9 of 22
A trench coat over a t-shirt is a good option when it's wet outside. 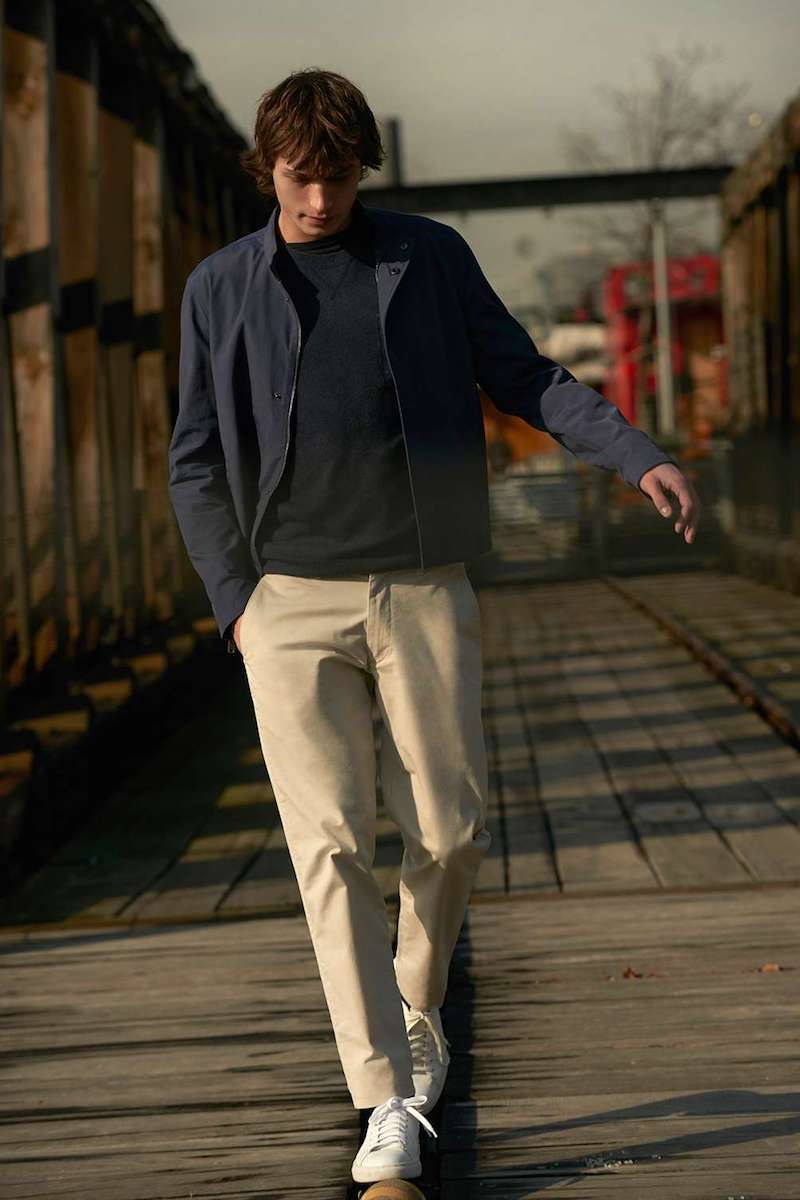 11 of 22
Stripes for days with wide legged trousers. 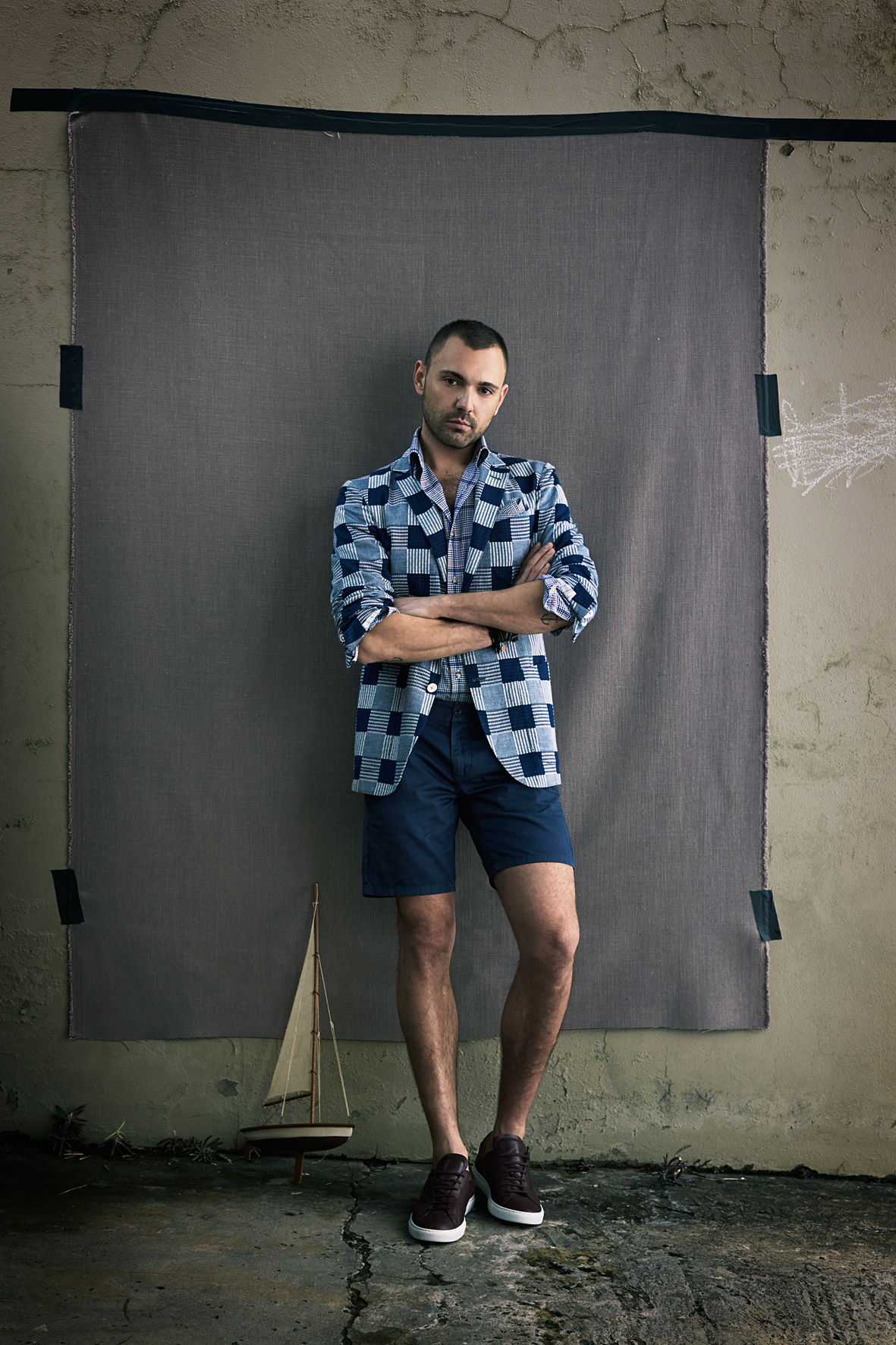 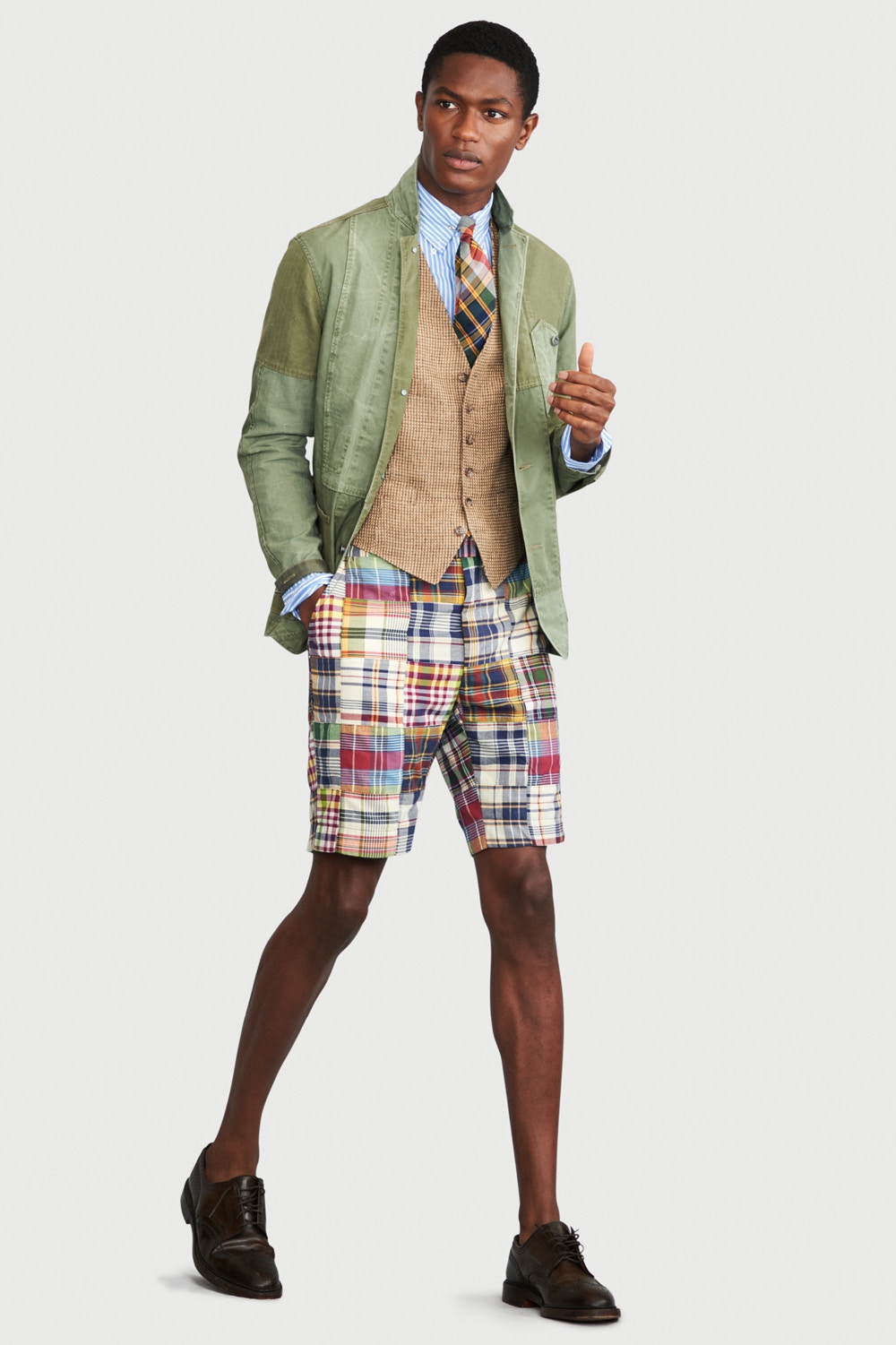 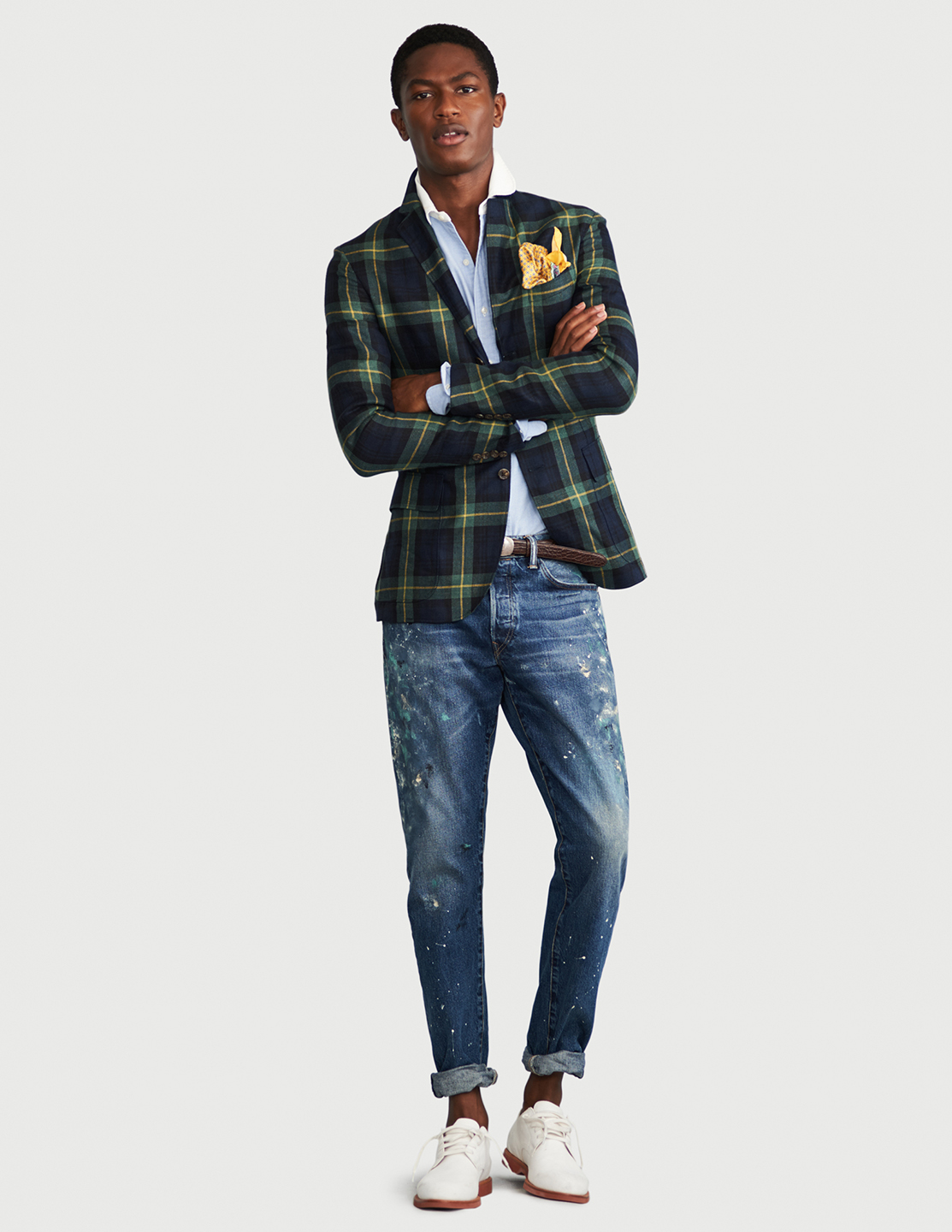 14 of 22
The bold blazer and jeans is a simple solution. 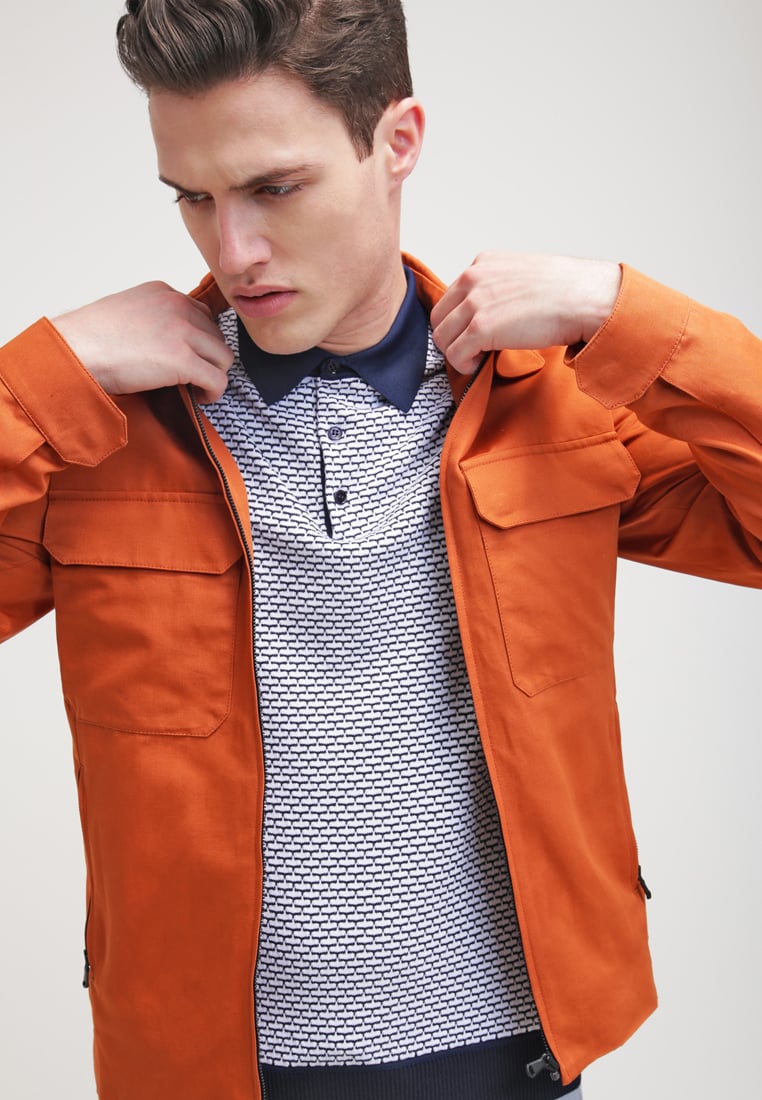 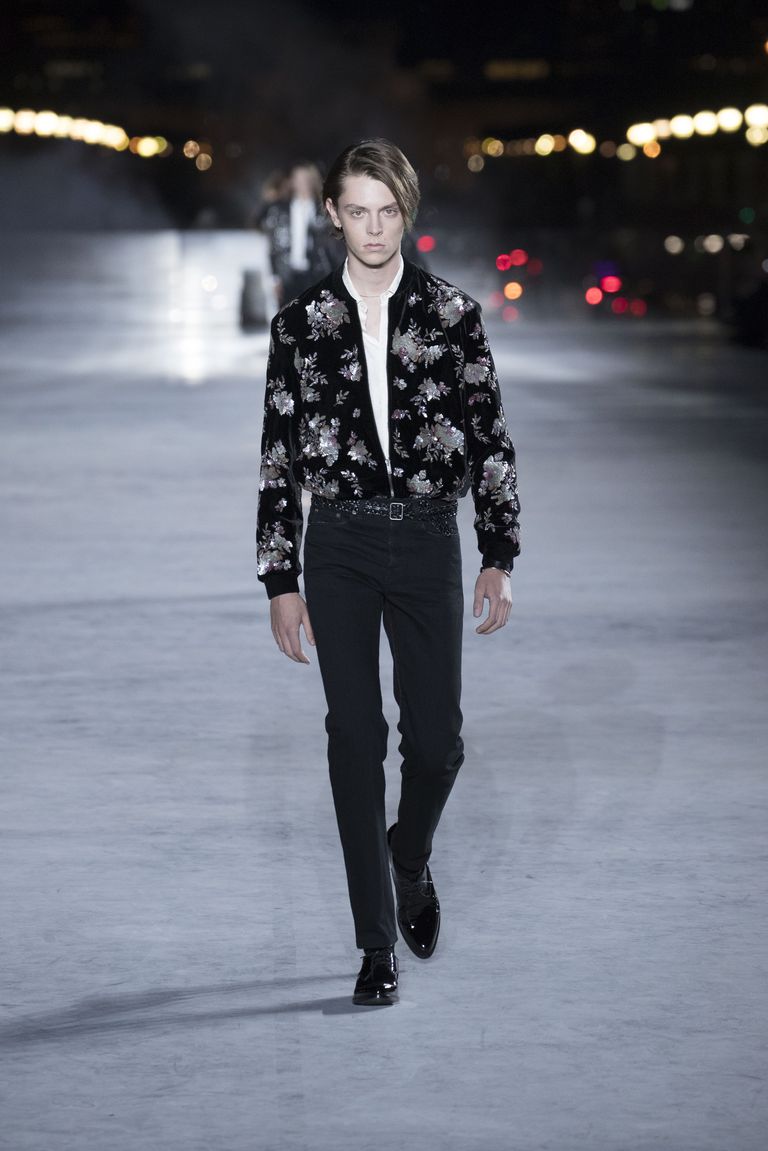 16 of 22
Print pattern bomber with jeans. 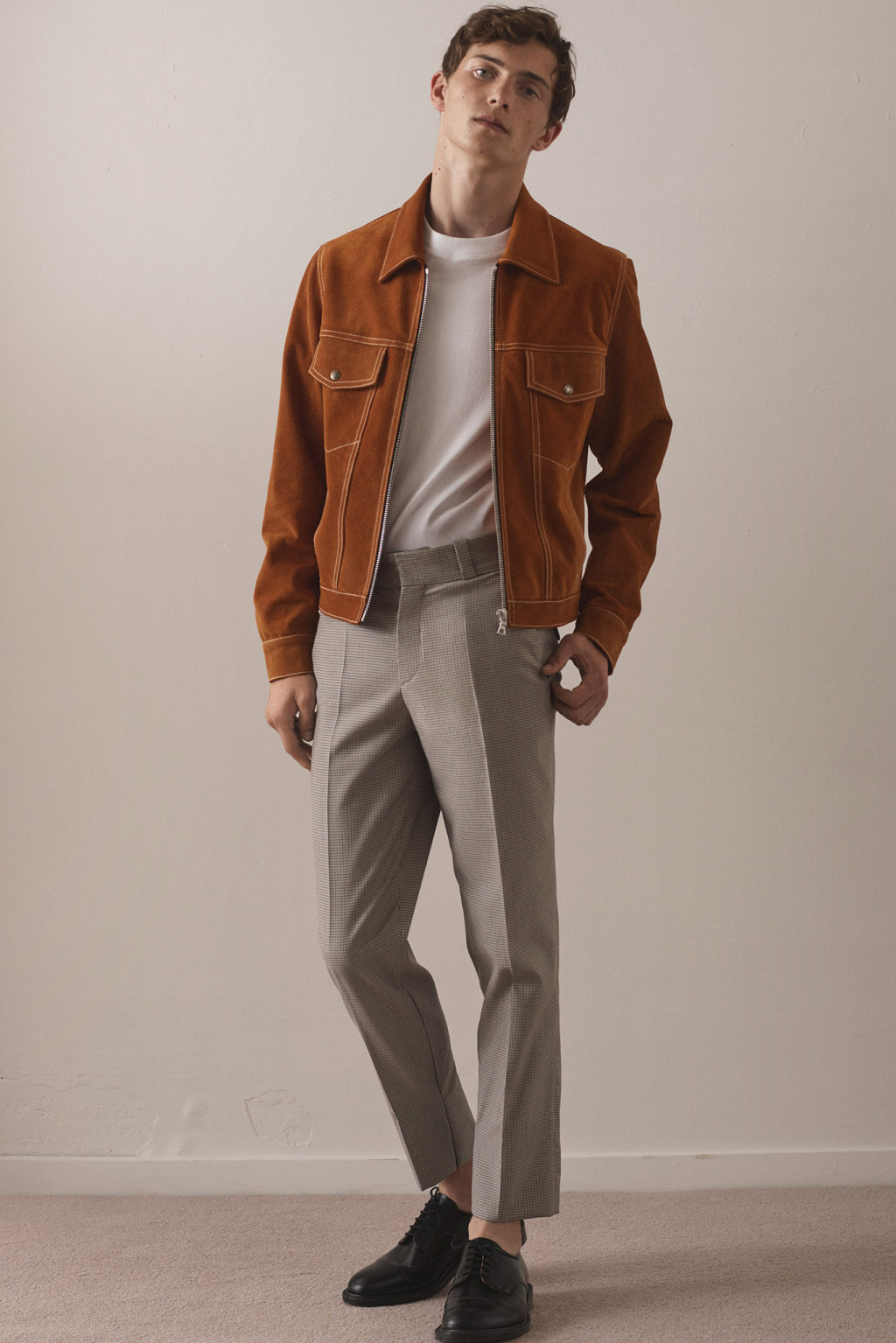 17 of 22
The suede trucker jacket and trousers is smart as hell. 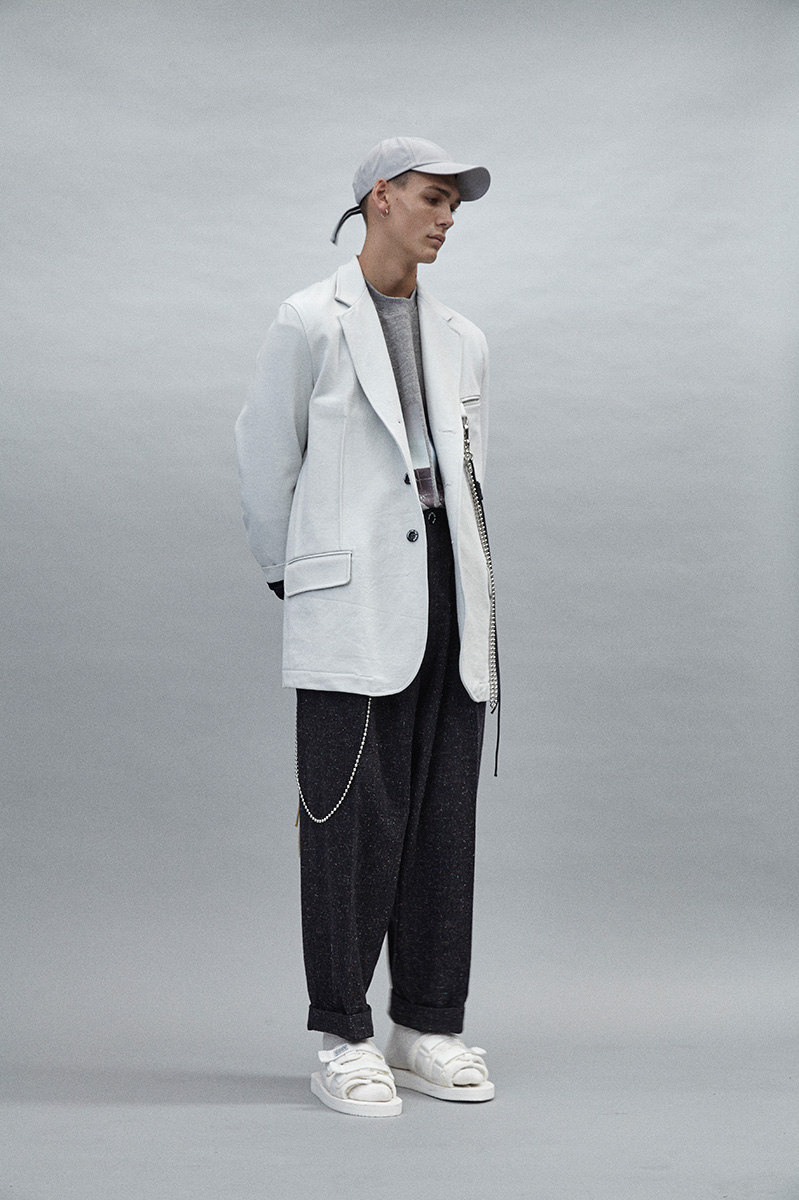 18 of 22
Not everyone likes classic. In this case the oversize blazer and trousers is a good solution. Sandals are okay if the top half is ballin' 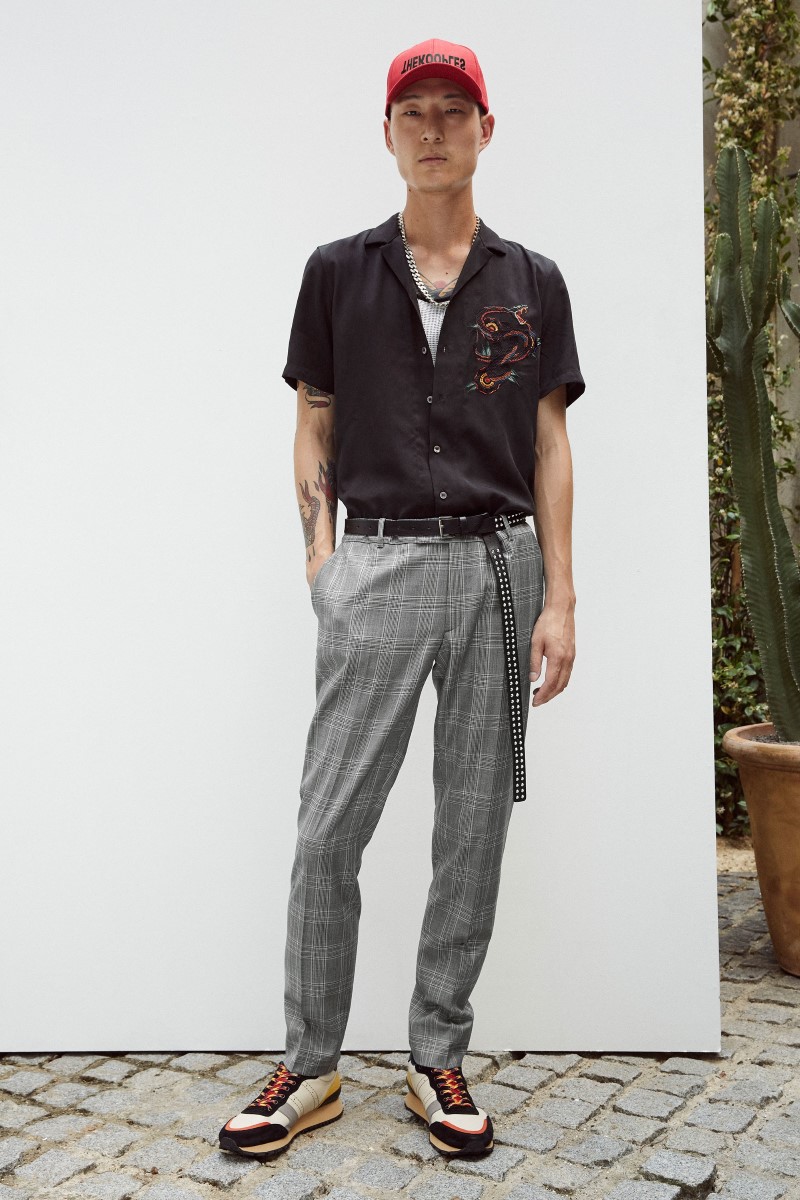 21 of 22
Trousers and blazer with boots works nicely too. It's designer chic. 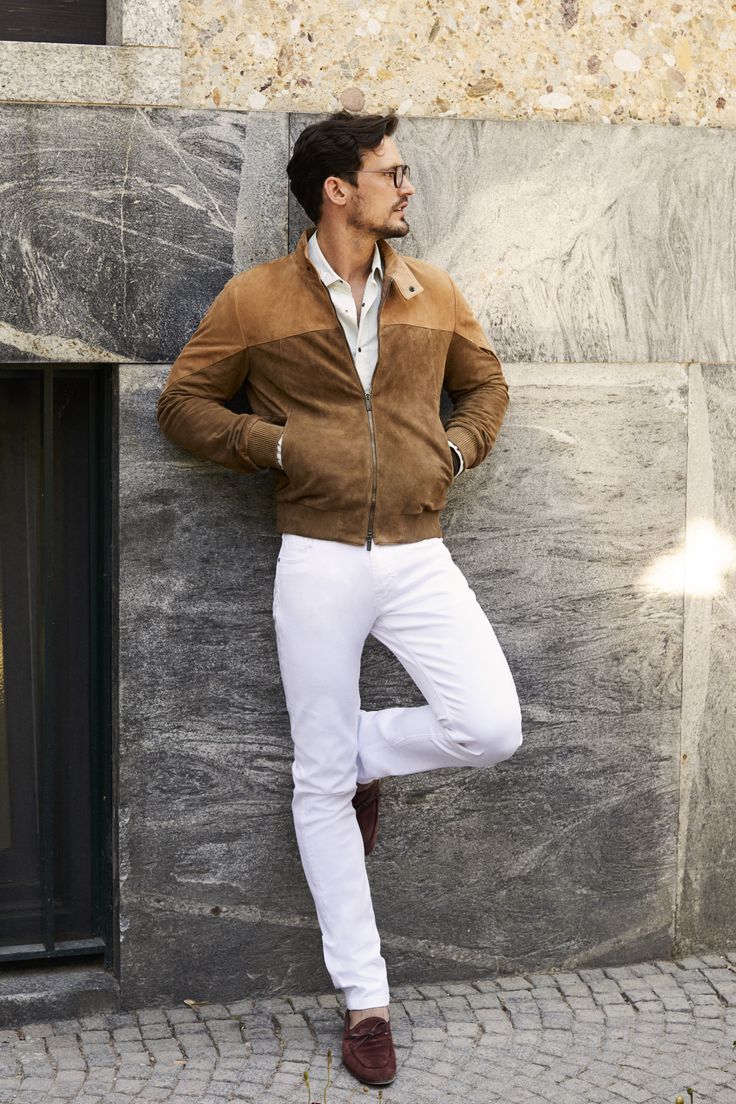 22 of 22
The white jeans and suede jacket will always be a classic.