Yesterday we praised Brooklyn Beckham’s skate style turned red carpet that not many people can pull off. It seems though that the eldest Beckham still has much to learn from his father, as David proved once again why he is a style icon for men everywhere.

The ex-footballer was recently in London at his wife Victoria’s Andy Warhol exhibition. The exhibition is being put on by tequila brand Don Julio 1942 in collaboration with Sotheby’s and features 12 works by Andy Warhol that will be on display for a limited time.

The famous couple teamed up for the event, both sporting all-black ensembles with flashes of white on David. Beckham appeared more casual with a plain white t-shirt hidden under his black jacket and his favourite white sneakers on, something that has become a staple in the celebrity’s wardrobe. As expected, his haircut was just as slick, with David opting for a quiff style. 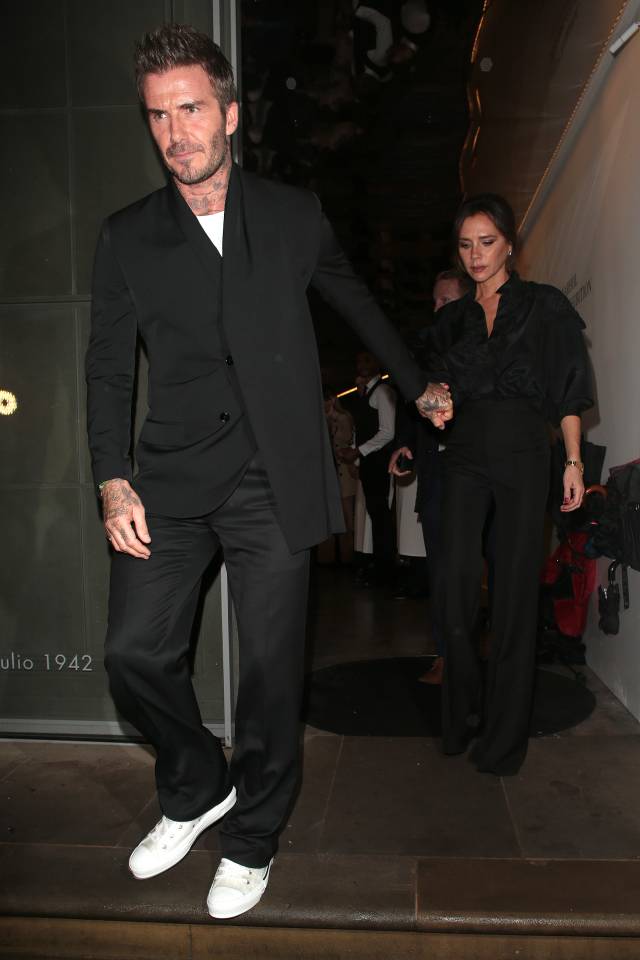 David is clearly bringing back the wide trouser leg which could finally take off in 2020. At DMARGE we have been talking about the trend for over a year but it has yet to really hit the mainstream despite some of the hottest designers creating them. However this is now the second occasion Beckham has been spotted with the look, so it could soon be hitting the streets for everyday males.

Black seemed to be the theme for the evening according to David’s Instagram of the evening, with other artists sporting all black ensembles with exception of artists Takashi Murakami, who is known for his oversized ‘daggy’ outfits. The evening was a star-studded affair with actors like Russell Tovey and Eva Longoria as well as artists like Brian Donnelly in attendance.

David has really caught the fashion bug and recently launched the Fashion Study Apprenticeship with the British Fashion Council and activist Adwoa Aboah. The Apprenticeship is a new program to make careers in the fashion industry accessible to people from all backgrounds. Who knows, one of the apprentices could soon be designing clothes for the famous Beckhams.

He is still keeping himself in football as he is the proud owner of a football team in America, the Inter Miami CF. Beckham must be planning on making Miami his second home as he recently splashed out AUD$50 million on a Zaha Hadid-designed apartment in the city.

Next time we see him he may have fully embraced the Latin influences of the city and rock up in a pastel linen suit. We can only hope.