Even wondered how to wear loafers? The classic loafer has been an essential piece of menswear since its invention in Norway in 1930. Its brief history goes something like this:

And now…loafers continuously cycle in and out of trendiness, but always remain a menswear staple. Over the years, loafers have become increasingly diverse and inventive, with designers pushing the boundaries of casual shoes and marrying high-fashion fearlessness with classic, comfortable style.

Today we’re showing the loafer a little love, with our essential guide with regard to how to wear the best loafers for men. And rightly so, since they are so often menswear’s most beloved slip-on shoe.

As you can probably imagine, when you’ve been around for almost 80 years, you undergo some changes. The loafer has endured update after update, continuously evolving with the changing times. Here are a few styles you may encounter in your search for the perfect loafer:

As classic as classic gets. The penny loafer has a leather strap across the top of the shoe, with a diamond-shaped slot just wide enough to hold a small coin. One theory states that the coin was a fashion statement devised by American prep school students in the 1950s. Another says the change was carried in case the wearer needed to make an emergency phone call. Either way, the style has become a fashion legend.

The actual origins of the tassel loafer are unclear, but one possible story involves a Hungarian-American actor who owned a pair of Oxfords with tassels at the ends of the laces. The Alden Shoe Company was tasked with making something similar, and came up with a slip-on pattern that used the tassel as a decoration. In 1950 they launched the shoe after experimenting with the design, and the tassel loafer was a hit from then on.

You have Gucci to thank for this one. The snaffle loafer – aka the Gucci Loafer – was introduced in 1968. Its distinguishing feature was a golden brass strap in the shape of a horse’s snaffle bit laid across the front. Gucci also turned the traditionally brown loafer black, making it just formal enough to be worn with suits. A loafer revolution was born, and big names like Gianni Agnelli and John F. Kennedy went on to sport the shoes.

Apron loafers are identifiable by visible edges or stitches that finish off the toe (thereby forming a sort of ‘apron’ along the shoe’s front). Also known as moc toe, apron loafers feature a separate piece of leather that extends from the bottom of the top line around the shoe itself. The resulting stitching line gives the impression of a ‘crease’ between the top of the toe and the bottom.

Inspiration & How To Wear Loafers

Knowing the options available is only half the battle. Once you’ve got loafers in your wardrobe, the next step is learning how to rock them with style and swagger.

The loafer can replace just about any other shoe in an off-duty outfit, while adding an extra dash of dapper to the look. Casual loafers can be worn with denim and khakis, and sockless with shorts during warm seasons.

Go for jeans and a t-shirt if you want to keep things relaxed, and a shirt and chinos if you want something with a little more class.

Loafers with jeans as long been a favourite of mine as it allows you to still wear your favourite denim but in a more fashionable and dressier way. The rules book here really goes out the window, however our long advice is ensure the length of your denim is on the shorter side. Excessively long and baggy jeans will look horrific with loafers. Ripped, selvedge and washed jeans are all suitable too. If you can, choose contrasting colours and ensure the top half compliments the bottom half. Meaning no sportswear on top.

Loafers With A Blazer

Another D’Marge favourite is the loafers and blazer combination. Here you’re playing in smart casual territory. Both single and double breasted blazers will work as too will jeans, trousers and chinos. Once again, trouser length is important as is colour matching. We prefer wearing a fitted t-shirt with a blazer, this keeps it dressy but not too over the top.

Summer nights and events are perfect for the chino and loafer combination. Blue, creme and khaki chinos are most often the favourite for men. Brighter coloured trousers are cool but they do limit what coloured loafers will work. Pair your chinos with a shirt or polo shirt, add a belt and ditch the socks. Enjoy, my friends.

Loafers With A Suit

Loafers will always work with a suit. Just ensure your trouser length is at the ankle. The bigger question is to sock or not to sock? That is the question. The beauty of fashion is that all rules are meant to be broken, and at the end of the day it comes down to personal preference. Socks with loafers are like pocket squares – rock them if you like them, don’t if you don’t. The sockless look has been trendy lately, so consider it if the weather and occasion allows.

Lastly, this is my least favourite way to wear loafers. Why? It’s just a bit douchy / preppy. It’s mid-summer, you’re at the polo or a rooftop party and for some reason you think it’s a good idea to wear loafers with shorts. Anyway, go for it. We recommend tailored shorts just above the knee (no shorter, please), a belt and a tailored shirt.

Loafers With A Tuxedo

Velvet slippers have long been an acceptable form of black tie footwear. If you wish to push the rules a highly polished pair of black leather loafers will also work too. See above for a wide range of colours and style. Colour match where appropriate. If in doubt, wear black. 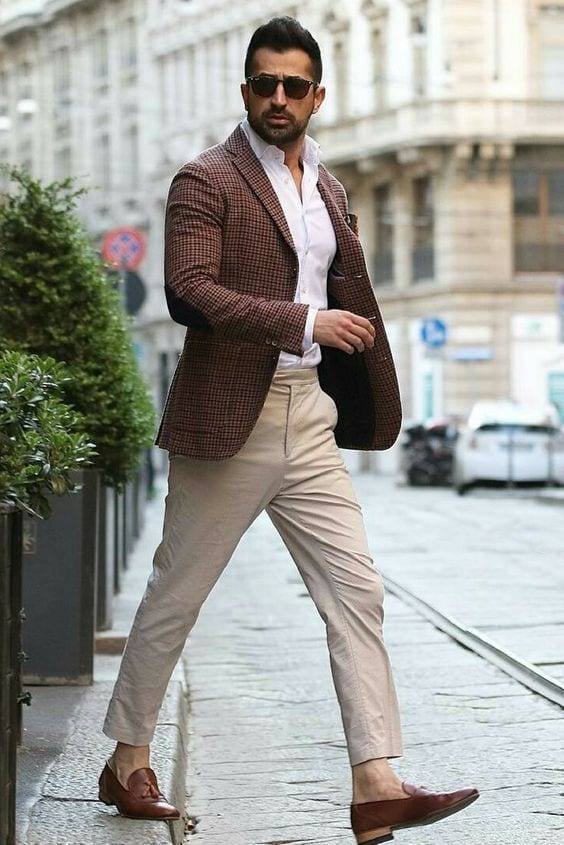 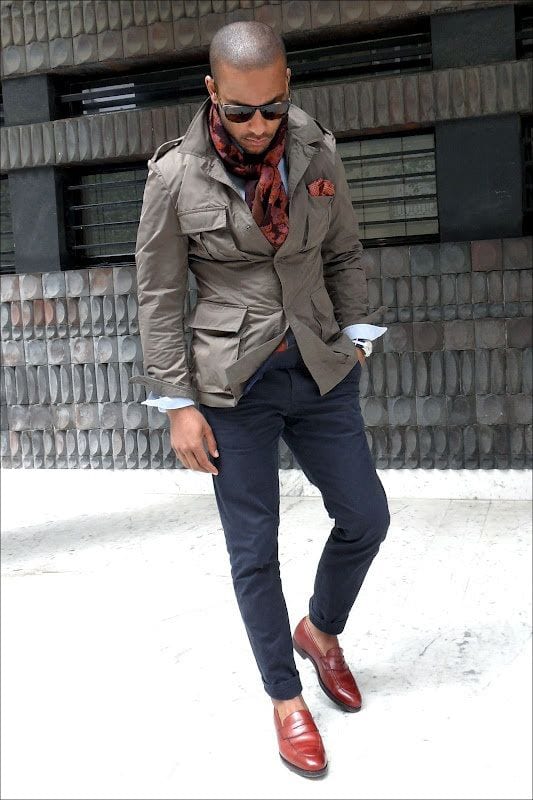 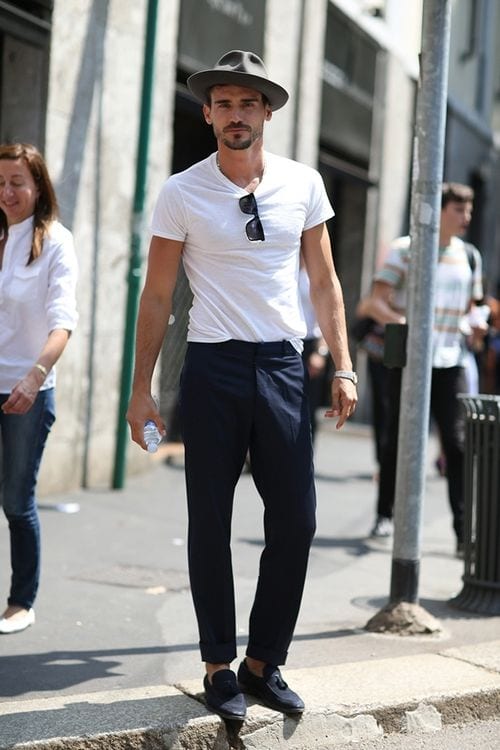 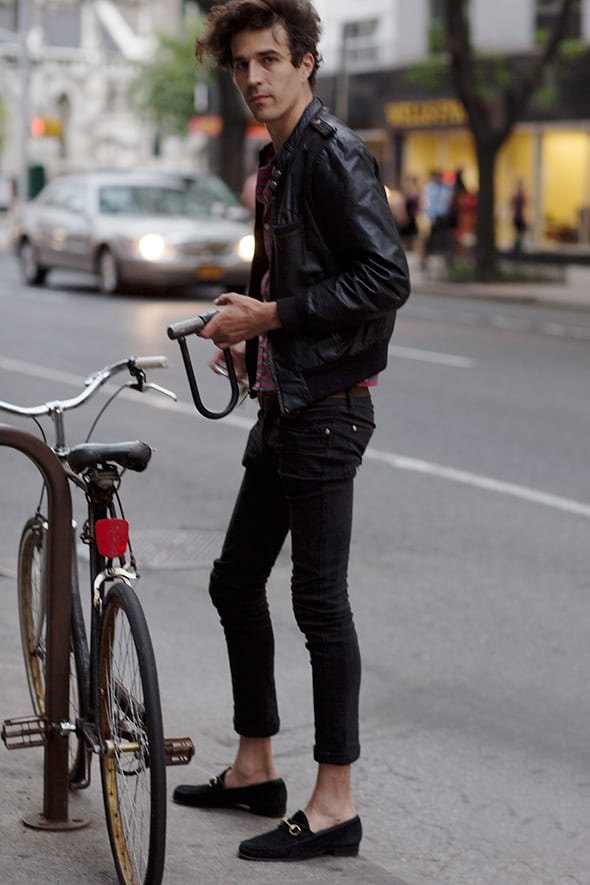 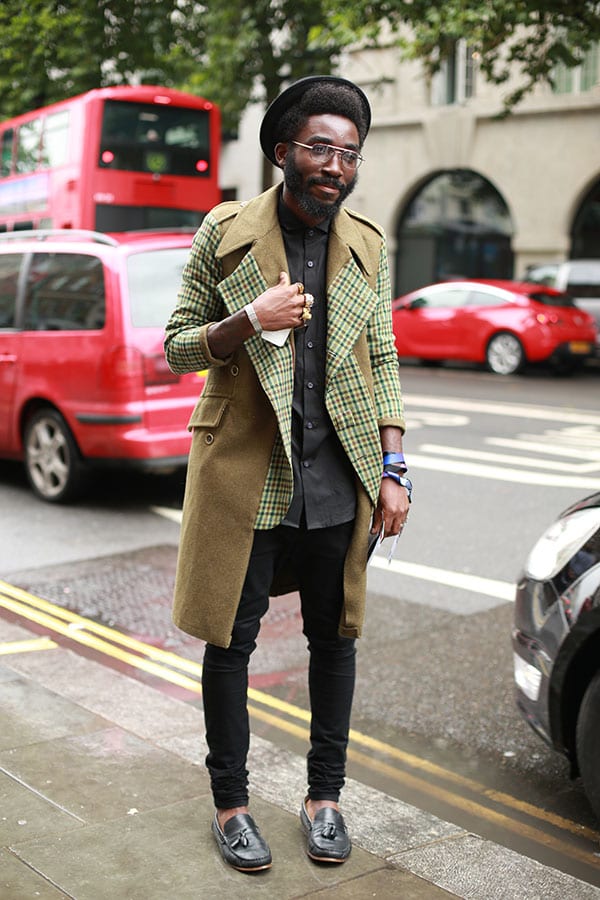 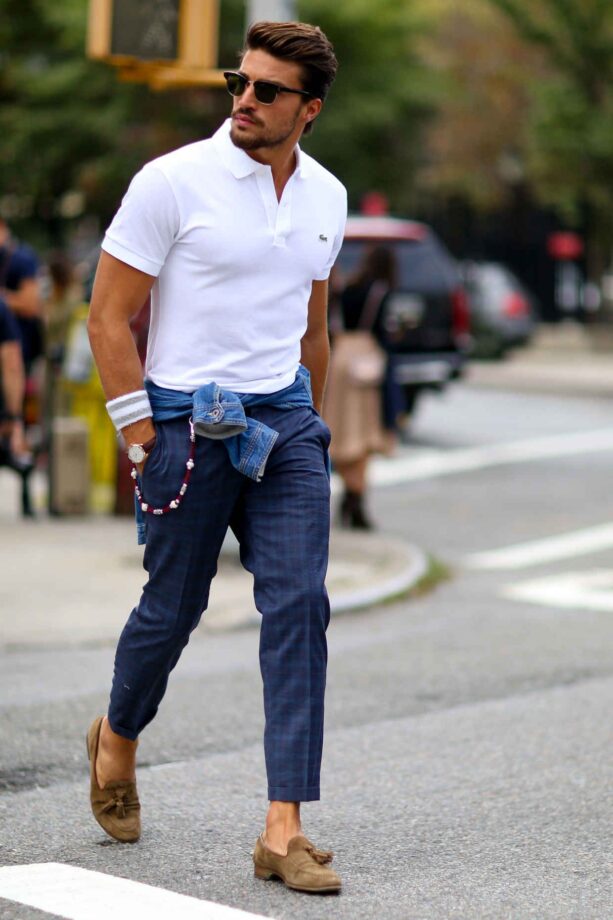 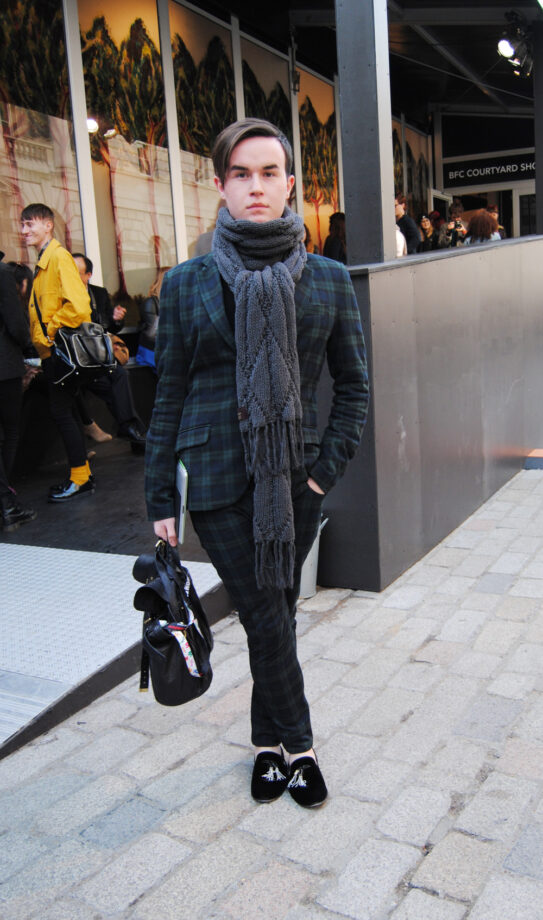 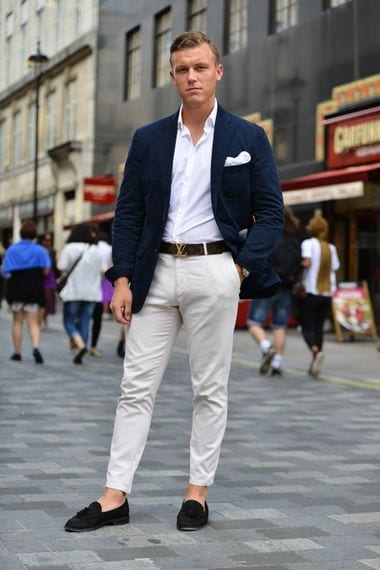 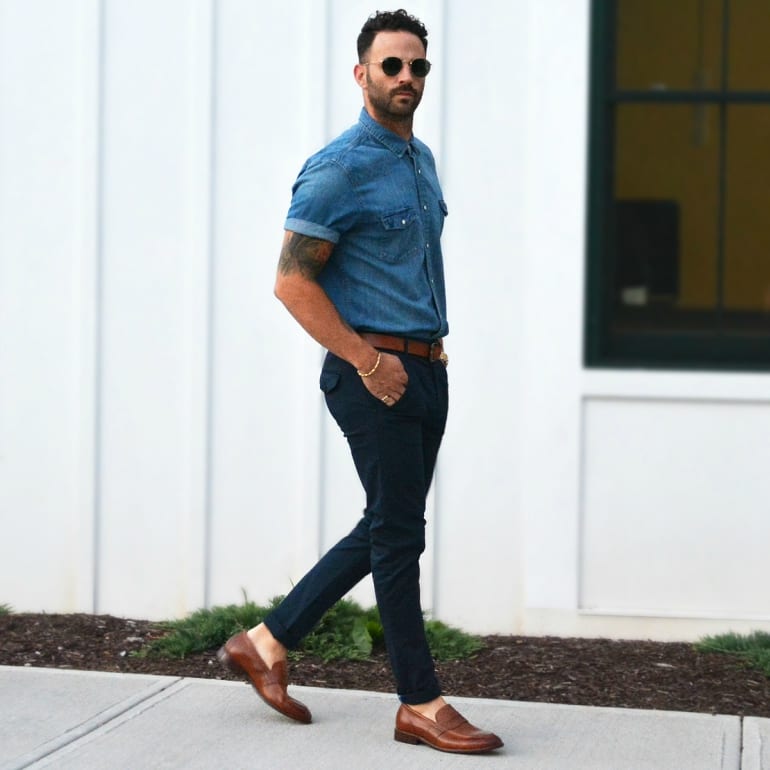 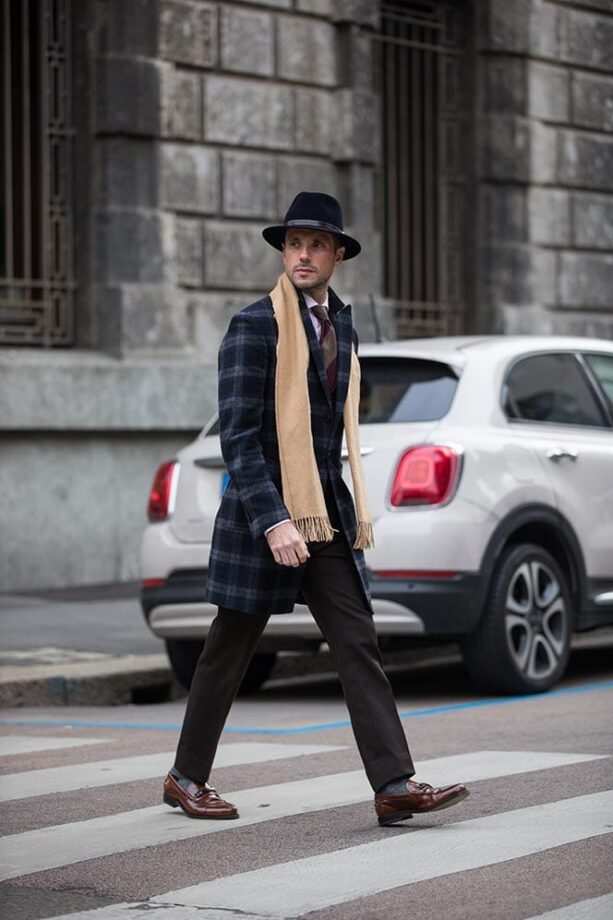 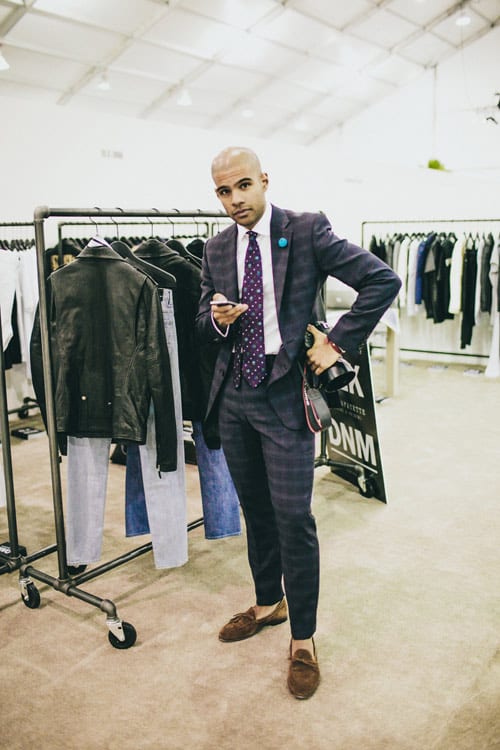 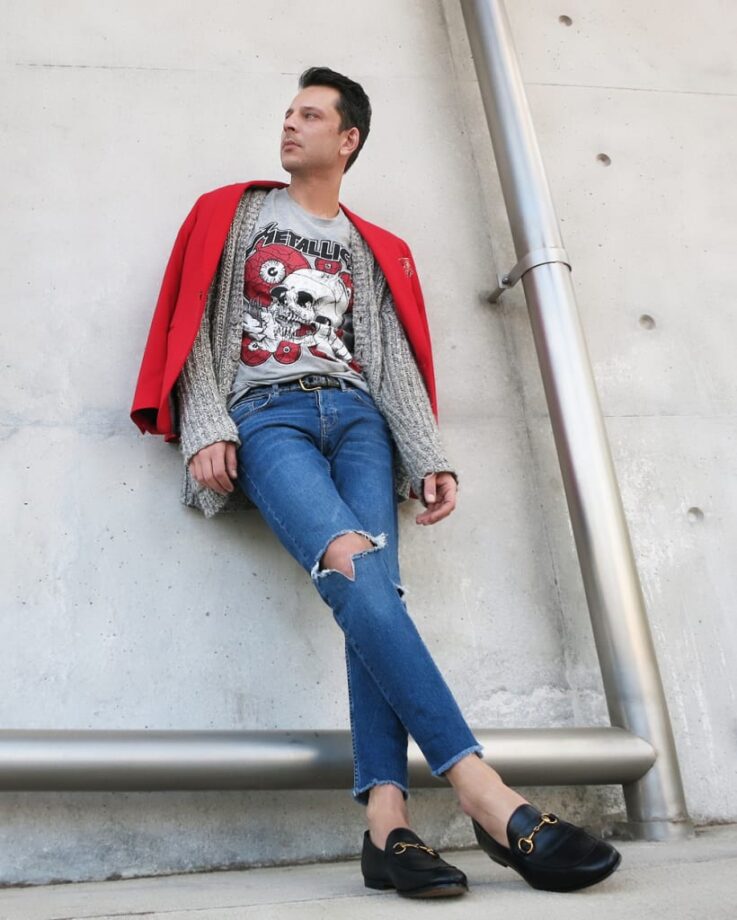 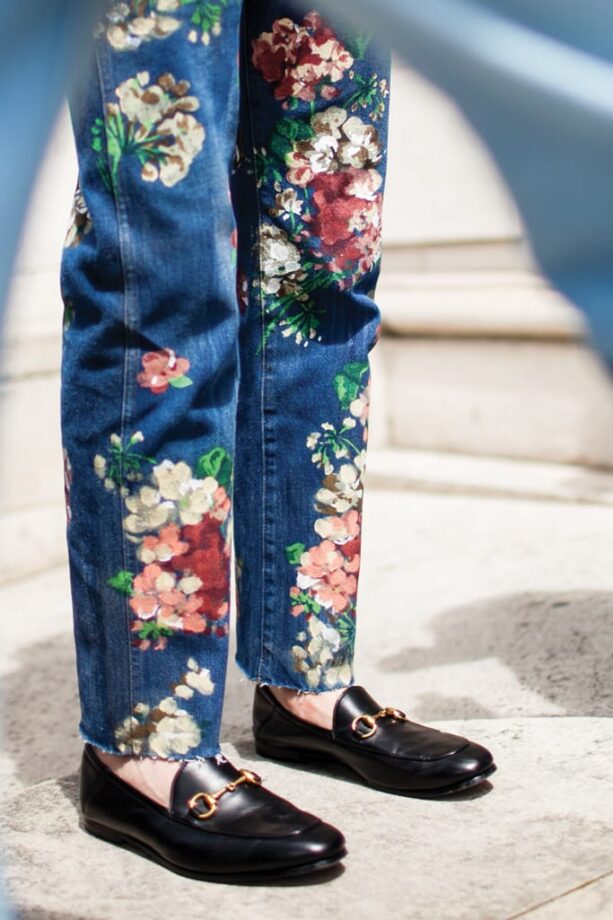 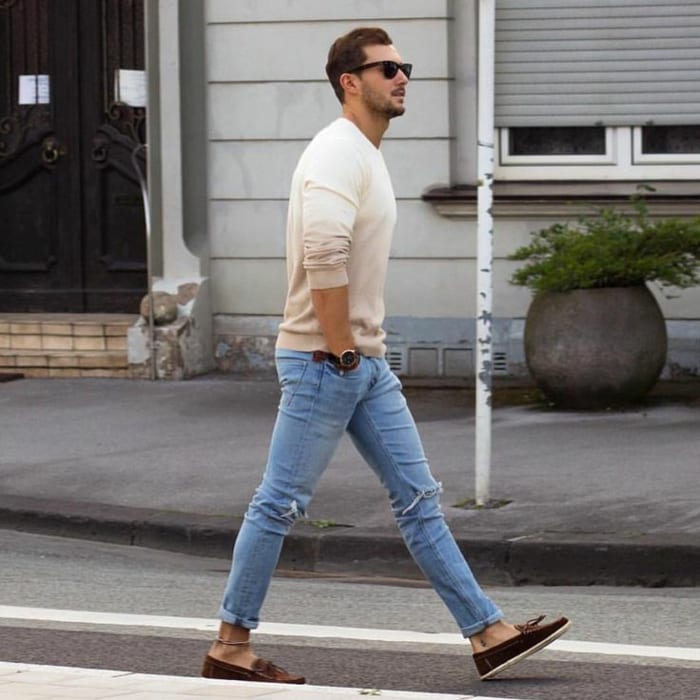 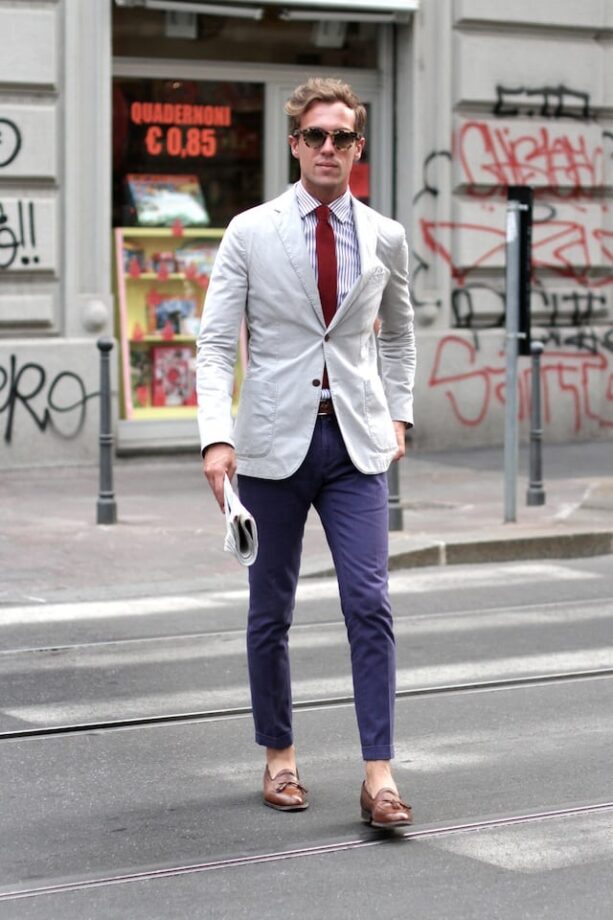