Because treadmills are for chumps…

In a city of yoga studios, Crossfit cults and UFC gyms, when you think of Sydney, running may not be the first activity that comes to mind. However, whether it’s a supplement to your luxury gym membership or your number one hobby, Sydney has a lot to offer runners. Not only does it have a shedload of coastline just asking to be run along, but Sydney also has large areas of bushland and grassland that offer a whole host of pathways and tracks for you to explore.

With running wear becoming increasingly technologically advanced – such as running jackets for beating the wind and rain – you don’t even have to wait for a sunny day to get outside. Admittedly, we wouldn’t go running in a heavy downpour, but if there’s a light drizzle, then there’s no reason why you can’t lace up your running shoes and log some kms.

So, where exactly should you run? We’ve put together this list of some of our most favourite running routes – a few are very similar to the best walking routes – that provide a range of terrain, elevation and length, all of which will boost your cardio fitness, so you can go further with each run. And for more inspiration, check out the Map My Run website which has a number of runs not just in Sydney, but across Australia, logged by other runners for you to replicate. 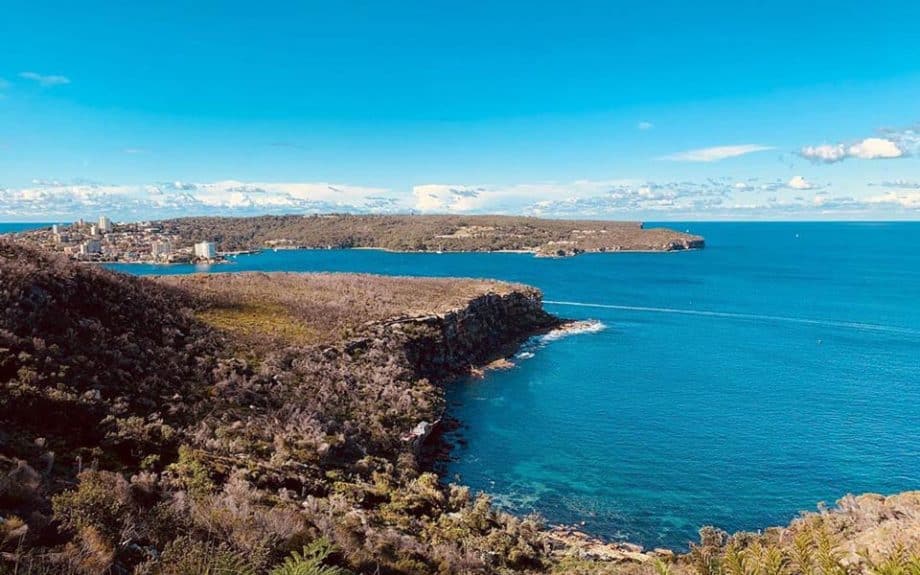 High on the list of best walks, this route is also a favourite of running aficionados. Not only does it offer some spectacular views across the harbour, but at around 18km return (depending who you believe, as some say it’s around 10km one-way), it’s a running route that will really test your stamina. With inclines and declines through forested areas, you’ll want to make sure you keep your eyes focused – as well as wanting to savour the flat sections – and with a mixture of purpose-built tracks, sand and concrete, it’ll do wonders for your balance and strength.

Of course, you don’t have to complete the return one if you don’t want to, as you can catch a bus or ferry from Manly back to the City or beyond. However, we’d recommend taking a decent pit stop in Manly itself, where you can visit one of its breweries or simply take a break on the beach to watch the surfers. 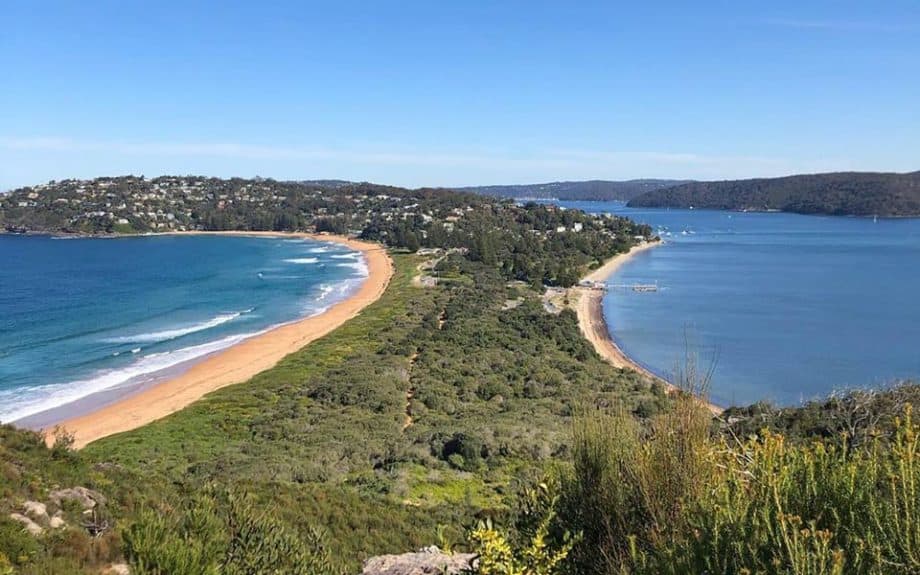 Not only is the trail leading up to Barrenjoey Lighthouse at Palm Beach one of the absolute must-do activities in Sydney, it also makes for a testing run. You’ll need to go early, however, because as soon as the sun is really shining in the sky, expect to be held up by huge crowds of tourists. Miss them, and you’ll be presented with a delightful run or jog across the sand, before tackling the steep ascents up to the Lighthouse.

Once there, you can continue to run through the narrow sections of path, and of course, you’ll want to take a break to marvel at the spectacular views back over Palm Beach. Run back down and stop at The Boathouse for a coffee or juice and some delicious breakfast and you’ll be set for the day. 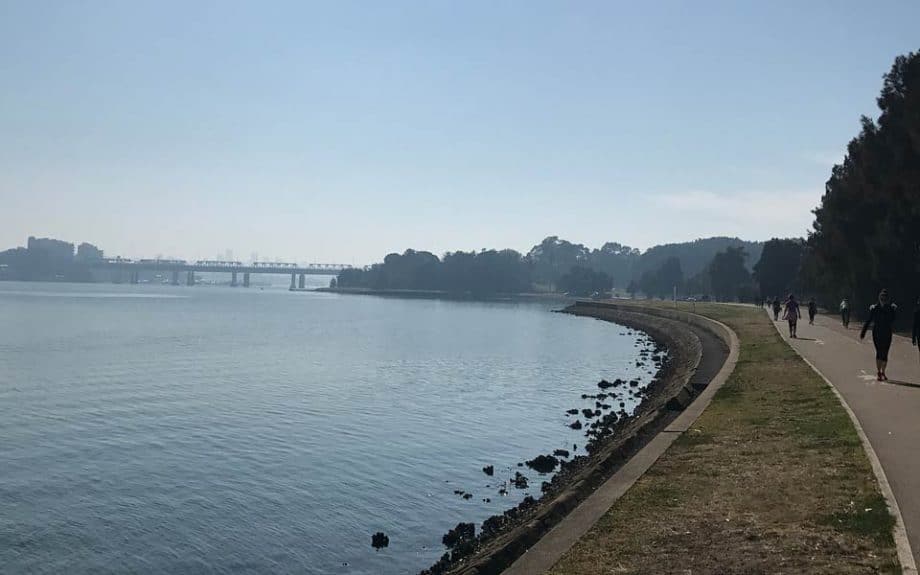 Iron Cove is the favoured early morning running of Sydney’s Inner West residents. There are no steep inclines or declines on this route, but rather a lovely flat loop that serves waterside views the entire way. You’ll eventually cross the Victoria Road Bridge over the Parramatta River and gaze over towards the CBD skyline. At 7km, it’s a good length for both beginner runners to start pushing themselves, and for seasoned veterans, it offers a simple route to smash out a few laps if training for a marathon.

Parking is available at King George’s Park for those coming from further afield. 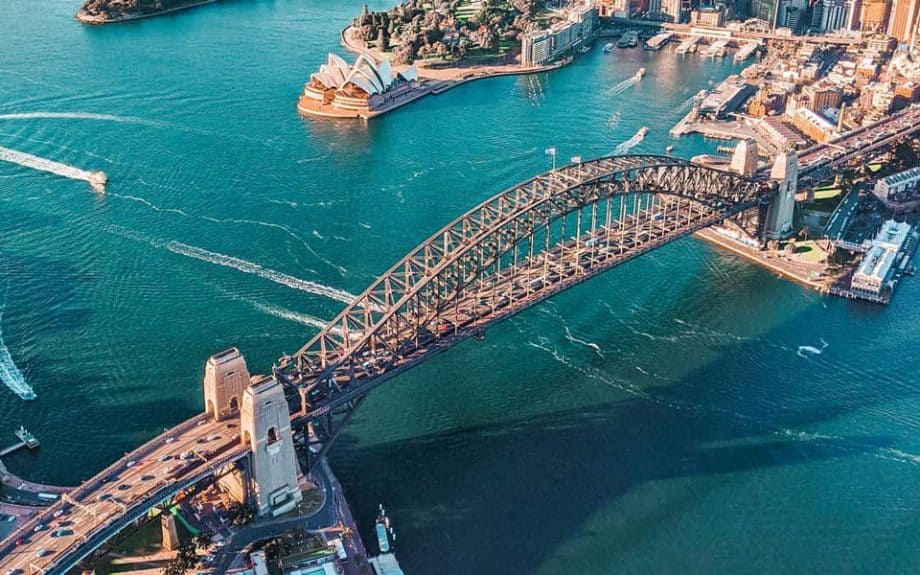 You should, of course, visit the Harbour Bridge and the Opera House if you’re a tourist, but once you’ve taken your photos, you should head back to the area to run it. This run is exceptionally versatile, as you can adjust the length of it to suit your running style and ability. The best and easiest way to complete this run is to start at Milson’s Point, near the Kirribilli Markets, make your way across the Harbour Bridge and down through The Rocks and Circular Quay before finishing at the Opera House and/or Royal Botanical Gardens. If you want to go that little bit further, you can continue to Mrs Maqaurie’s Chair. You’re then left with the option of finishing here or using it as a turning point to head back to where you started on the north side of the Bridge.

If you can make it for sunrise you’ll be rewarded with jaw-dropping views across to the CBD as you head over the Harbour Bridge, plus, it should be pretty empty, leaving you to run in total peace. 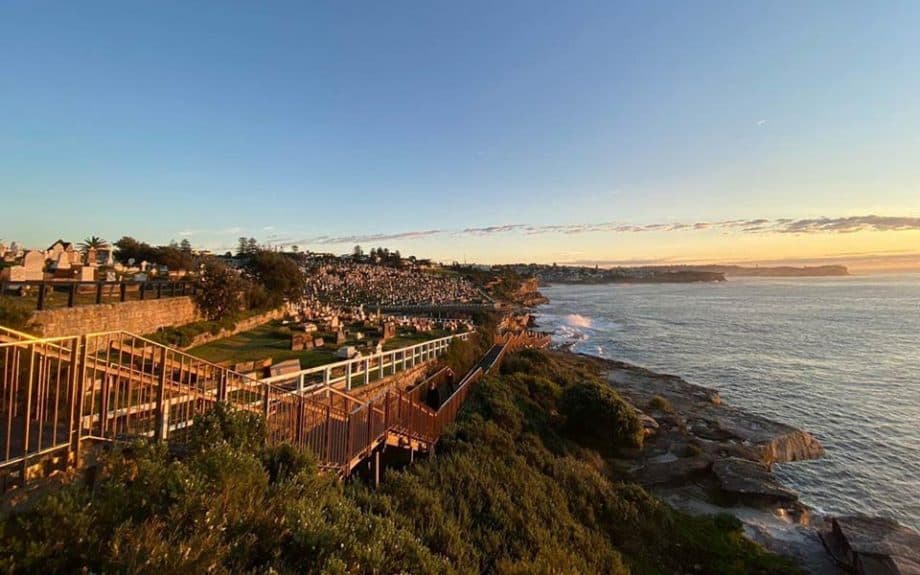 The quintessential Sydney walk, the Bondi to Coogee route can also be run. It may be quite hilly in some areas, but they will only serve to strengthen your quads and hamstrings. Since this walk and running route is so popular with locals and tourists, you’ll want to time it right to avoid serious crowds.

Do, and you’ll be basking in coastal views the entire 6km route (12km return) and empty beaches along the way if you choose to stop off in Bronte, Tamarama or Clovelly. And, with a finish at either Bondi Beach or Coogee Beach (and the Pavilion) waiting for you, you’ll have the perfect location for a post-run feed. 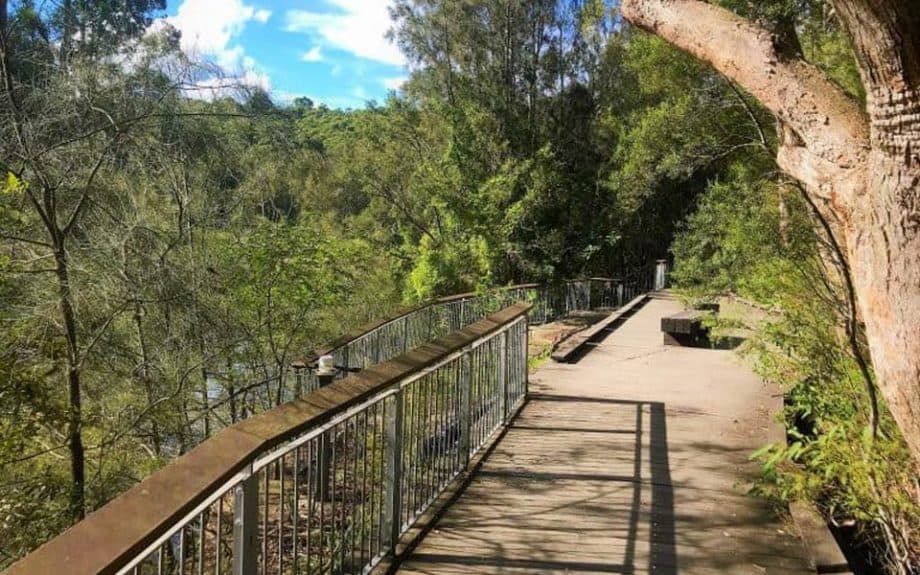 The running route at Lane Cove National Park could be considered a well-kept secret of Sydney’s running community, but we’re here to reveal it to you. The running track is an 11km loop that follows the shores of the Lane Cove River. You can park within the National Park itself, with access from Riverside Drive, from here you can run along the Riverside Walk all the way until you reach Lane Cove Road.

A short trip over De Burghs Bridge will bring you to Lane Cove Valley Walk on your right, which you follow all the way back to your car. It’s an incredibly scenic route with forests of red gum trees, and one that shouldn’t be too busy. Keen ornithologists will be able to spot a fair few species of bird along the way, too. 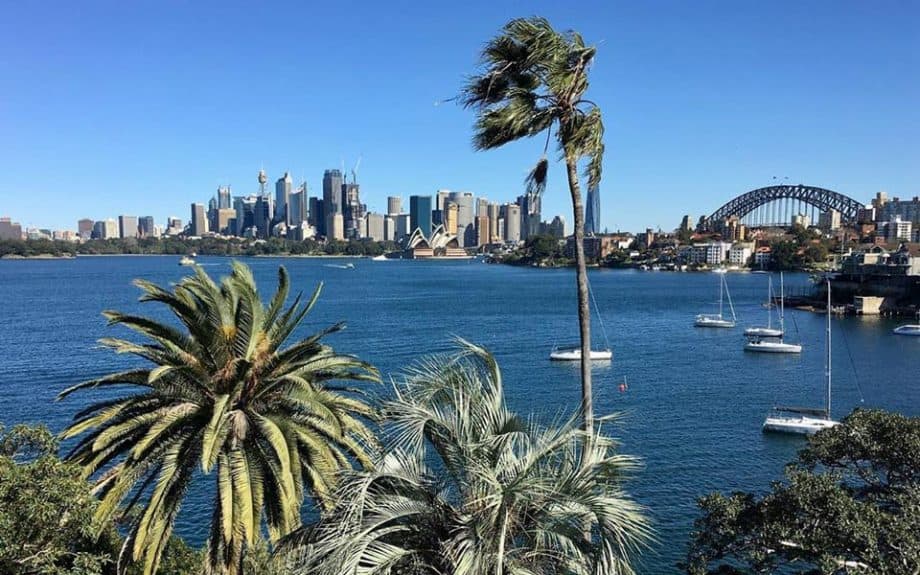 A reasonably short North Shore classic, the Cremorne Point route enables you to enjoy picturesque views as you run over gently rolling hills, which provide good shade for most of the way. A lookout point at Roberts Point is well worth a stop at, not only to catch your breath but to take in the views across the Harbour.

In the summer months, you’ll do well to either pack a separate pair of swimmers or be prepared to give your running shorts a dunk, as you’ll want to take a dip in Maccallum Pool.

Park your car anywhere around Hodgson Ave and head down to the footpath to reach the start point. 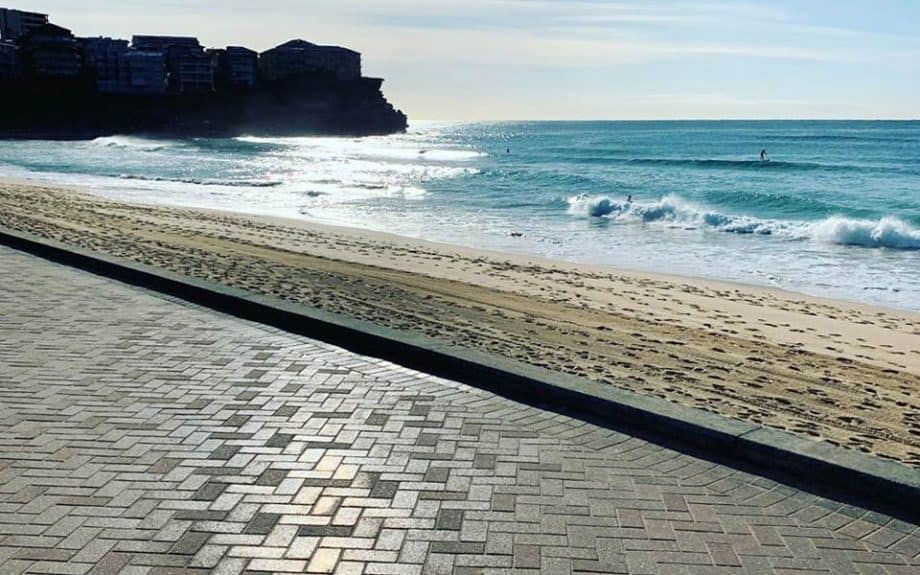 This is one of the shorter runs on the list, but definitely one of the most enjoyable. Start at the Queenscliff Surf Club (the northernmost corner of the beach) and run along the beachfront until you get to Manly Surf Club.

On your way, there are a number of poles which are great markers for interval training – sprint, then jog (or walk), and repeat – and also a fair few bubblers, so no need to lug a water bottle around with you. Once you get to the Manly Surf Club turn left and follow the path round to Shelly beach, passing a number of cafes (and a sea pool) on your way.

Once there you can either enjoy the marine reserve or head back to Queenscliff and sprint up the stairs to get that heart rate up one more time. 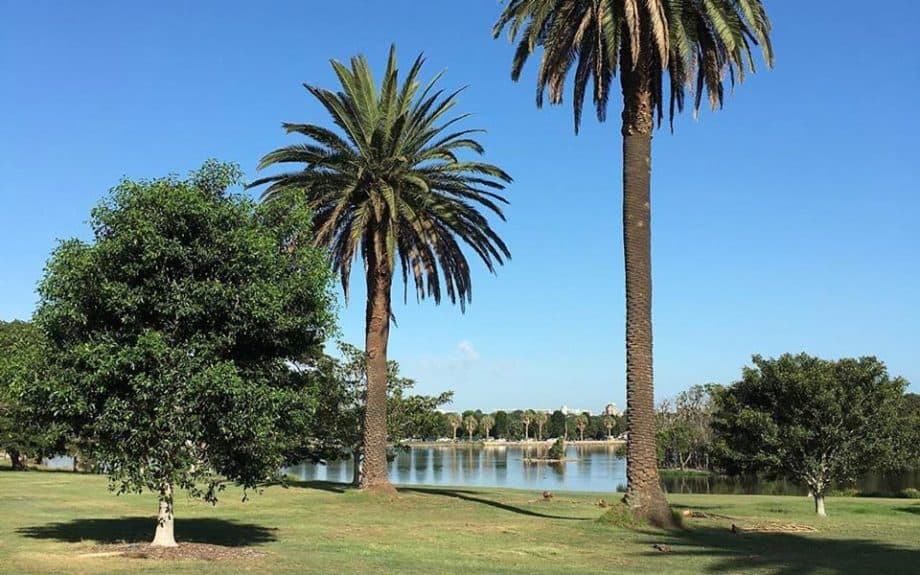 The default Grand Drive loop at Centennial Park is a great introductory run for beginners as it offers varied terrain such as asphalt and grass, or a walk (or rather run) in the park for those more experienced who either want to complete a few laps or just give their bodies a quick warm up in the morning.

Once you’ve got the 3.7km loop nailed down, you can begin to experiment with adding in other loops and tracks to extend it – adding in a loop around Busby’s Pond takes it to 5km – but until such a time, don’t stray from the white fence. If you feel comfortable enough, you can even compete in a free weekly timed 5km run in Centennial Park, giving you PB times that you can aim to beat.

Where can I run in Sydney CBD?

You can technically run wherever you want, but traffic, both human and vehicular, provide obstacles. Great areas to run in the CBD include Centennial Park and around Pyrmont and Darling Harbour.

Can you run over the Sydney Harbour Bridge?

Yes, absolutely. The run across the Sydney Harbour Bridge is approximately 2km and is free to pedestrian traffic. If you're running from North Sydney, you should continue your run through The Rocks and head toward the Botanical Gardens.

How do I get to the Spit to Manly walk or run?